When veteran center Max Unger unexpectedly announced his retirement in March, it caused uncertainty in the middle of the New Orleans Saints‘ offensive line, a line that probably relies on stability more than any other NFL unit. As a result, the Saints were busy searching for Unger’s replacement both during the free agency period and during the 2019 NFL Draft. Right now, it seems like it will be rookie center Erik McCoy who will fill the void created by Unger’s retirement and start for the Saints. Let’s put that choice under the microscope and see why the Saints are probably making a good decision.

The offensive line played a big part in the success that the New Orleans passing game — and quarterback Drew Brees in particular — had last season. Brees was kept clean on 74.3% of his dropbacks in the regular season, which ranked second in the NFL behind only Ben Roethlisberger. However, they could not help their running backs as much as some other offensive lines in the NFL as the Saints averaged just 1.49 rushing yards before contact, 21st among teams. 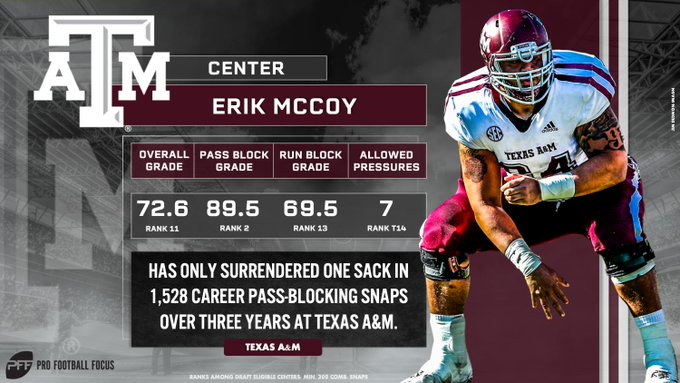 While Unger brought stability and experience to the unit, his performance was not up to the standard that he set for himself in previous seasons. The former Seahawk's run-blocking grade of 53.2 and his overall grade of 60.9 were both his lowest mark since his 2010 season, a season which was cut short due to an injury after just 51 snaps. As a result, finding a good replacement might actually mean an upgrade for the unit.

The Saints’ first candidate was free agent Nick Easton, who they signed to a four-year contract just five days after Unger’s retirement. Although Easton has already been on three teams over the first four years of his NFL career, the former Harvard standout made it onto the field only with the Minnesota Vikings. Easton got his first opportunity when starting center Joe Berger went down with an injury in 2016 and Easton started the last five games of the season in his place. However, he struggled in these games as he allowed 11 total pressures which were the second-most by a center in the NFL in that span. The next season, Easton started 12 games at guard for the Vikings but did not stand out from a heavily criticized Minnesota offensive line — he earned a PFF overall grade of 57.5 before missing the 2018 season with an injury.

Later in the spring, the Saints selected center Erik McCoy in the second round of the 2019 NFL Draft, and according to camp reports, he already has the upper hand over Easton — which may not come as a surprise if we look at his college production.

McCoy earned PFF overall grades over 65.0 in all three of his seasons at Texas A&M and earned a career-high grade of 72.6 in his final season as an Aggie. He was especially impressive in pass protection as he allowed just seven total pressures — and no sacks — on 506 pass-blocking snaps in his final college campaign. In addition, McCoy was also solid in the run game, which is highlighted by the fact that Texas A&M averaged a whopping 7.3 yards per carry on runs in the A-gaps (the gaps between the center and the guards).

Consequently, if McCoy can hit the ground running, he can possibly represent an upgrade in the running game for the Saints while he probably will not be a liability in pass protection. McCoy will surely be under the spotlight early on in his rookie year as he faces a strong Houston pass-rush in Week 1 before going up against Aaron Donald — the best defender in football — in Week 2.