PHILADELPHIA, PA - SEPTEMBER 24: Carson Wentz #11 of the Philadelphia Eagles runs with the ball with Jason Kelce #62 blocking for him against the New York Giants at Lincoln Financial Field on September 24, 2017 in Philadelphia, Pennsylvania. The Eagles defeated the Giants 27-24. (Photo by Mitchell Leff/Getty Images)

The diversity of Philadelphia Eagles head coach Doug Pederson's play calling has had a ripple effect on the entire Eagles team – most notably QB Carson Wentz (85.0 overall grade – fifth among quarterbacks). However, there’s another Eagle on the offense having a career year – center Jason Kelce.

Kelce has never shown as a great pass protecting center, but where he excels is run blocking. His 96.7 run block grade this season crushes No. 2 center David Andrews’ 85.6. If the season ended today it’d be the third-highest of any offensive linemen, regardless of position, since 2006. His overall grade reflects that dominance. 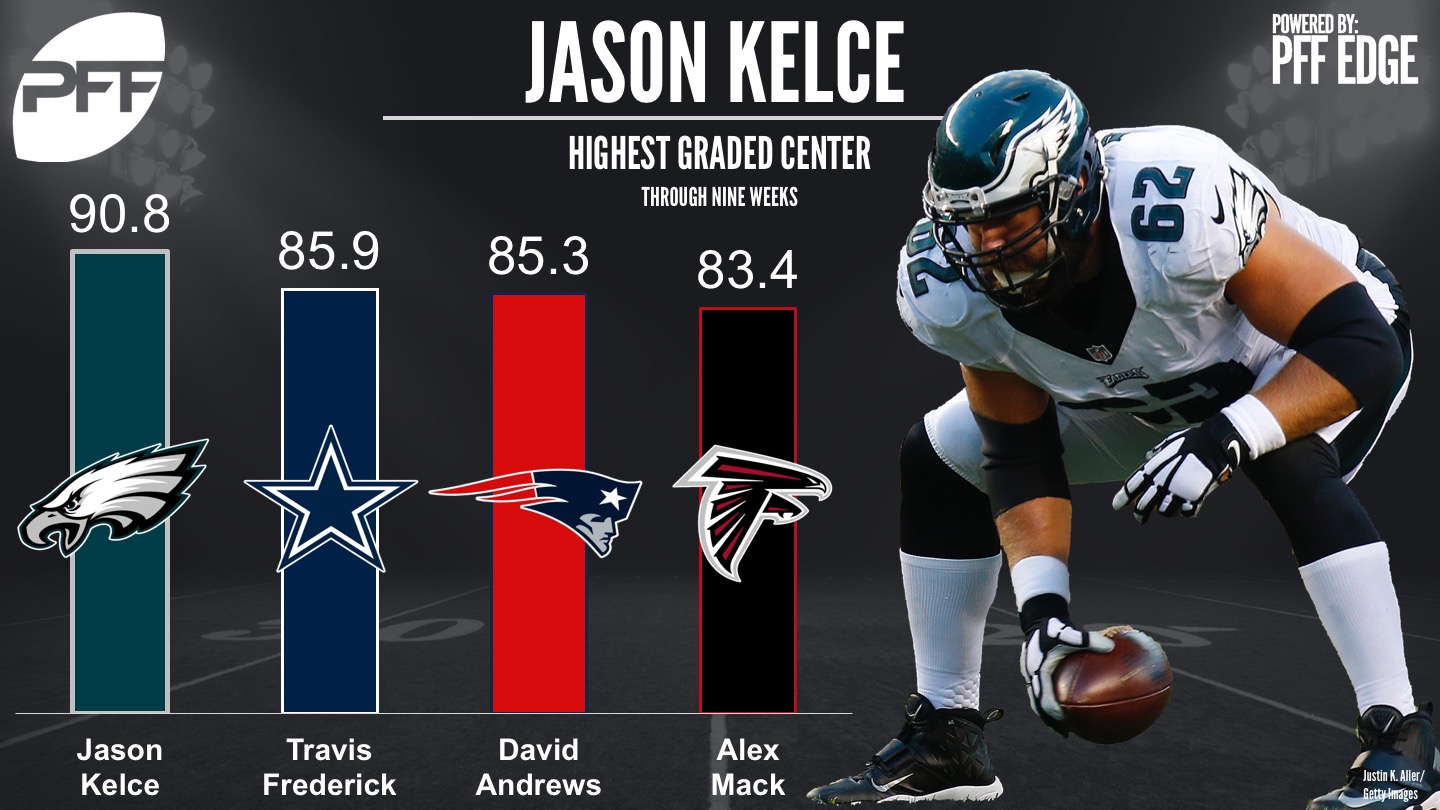 Under head coach Chip Kelly, Kelce was pretty good – earning overall PFF grades in the 80.0's from 2012-2015. Kelly used inside and outside zone on 93 percent of runs – essentially zero diversification.

With another year in the current system, Pederson has dialed up some more creative play-calling. The Eagles have used five different run concepts more than 12 times each. They’ve also used 98 RPOs very effectively, the next highest figure in the league is 65.

Kelce has 66 blocks PFF considered ‘wins’ compared to 27 ‘losses’. The next offensive lineman at any position has 51 wins. Kelce is consistently winning, period.

Two concepts the Eagles run the most:

Outside zone – Philadelphia has run almost 36 percent outside zone (their most utilized run concept) – the third-highest rate in the NFL. They love the ‘pull lead’ so Kelce can do work in space – where he’s the best in the league.

On outside zone – Philadelphia pulls center Jason Kelce routinely – where he does some of his best work pic.twitter.com/4lIBJk4Rsw

Inside zone – Philadelphia’s averaging 5.2 yards per attempt on inside zone – the second highest figure in the NFL.

They also run plenty of outside zone with read option as well pic.twitter.com/nABicUNDHZ

Kelce might not have the dominating reach blocks like Travis Fredrick, but the Eagles match up his strength in space. He wins in a unique way that isn’t as “sexy,” but consistently gets the job done.

Jarran Reed, DI – Reed ranks sixth in the NFL in run stop percentage among DTs, with 16 run stops in 2017. Even if Kelce hits the second level on outside zone he should meet Bobby Wagner – our top-graded LB this season (95.6 overall grade).

Damon Harrison, DI – ‘Snacks’ might not have as many run stops as in previous seasons, but he owns a 94.1 run defense grade – tops among all defenders regardless of position.

Justin Ellis, DI – Ellis has a solid 81.4 run defense grade this season. Kelce will see NaVorro Bowman at the second level, who has eight run stops since joining the team just three weeks ago.

Philadelphia is 8-1 for many reasons. Two of which – touch the ball on every play. The next time you watch the Eagles, keep your eye on the center.