Apr 26, 2018; Arlington, TX, USA; Terrell Edmunds (Virginia Tech) with NFL commissioner Roger Goodell after being selected as the number twenty-eight overall pick to the Pittsburgh Steelers in the first round of the 2018 NFL Draft at AT&amp;T Stadium. Mandatory Credit: Tim Heitman-USA TODAY Sports

The Pittsburgh Steelers made history with their 2018 NFL Draft, grabbing Terrell Edmunds with the 28th overall pick of the first round. Edmunds joined his brother to form the first pair of brothers to be selected in the first round of a single draft, much to the surprise of the entire NFL landscape.

Terrell, much like his brother and now Bills LB Tremaine, brings a strong athletic profile with him to the Steel City. However, unlike his brother, Terrell was unable to grade out particularly well as his best overall season grade was the 76.8 he finished with in 2016. He does have plenty of numbers and highlight-reel plays to back up his first-round pick but there were far too many of the other end of the spectrum when viewing his tape. At his best, Terrell did break up 10 passes and record six interceptions on 104 career targets in coverage.

After their first round pick, the Steelers double-dipped into the Oklahoma State pool, selecting WR James Washington and then QB Mason Rudolph in the second and third round, respectively. Washington led the nation last year with 815 yards on passes that traveled at least 20 yards downfield and Rudolph finished first in the draft class with 1,712 yards on deep passes. 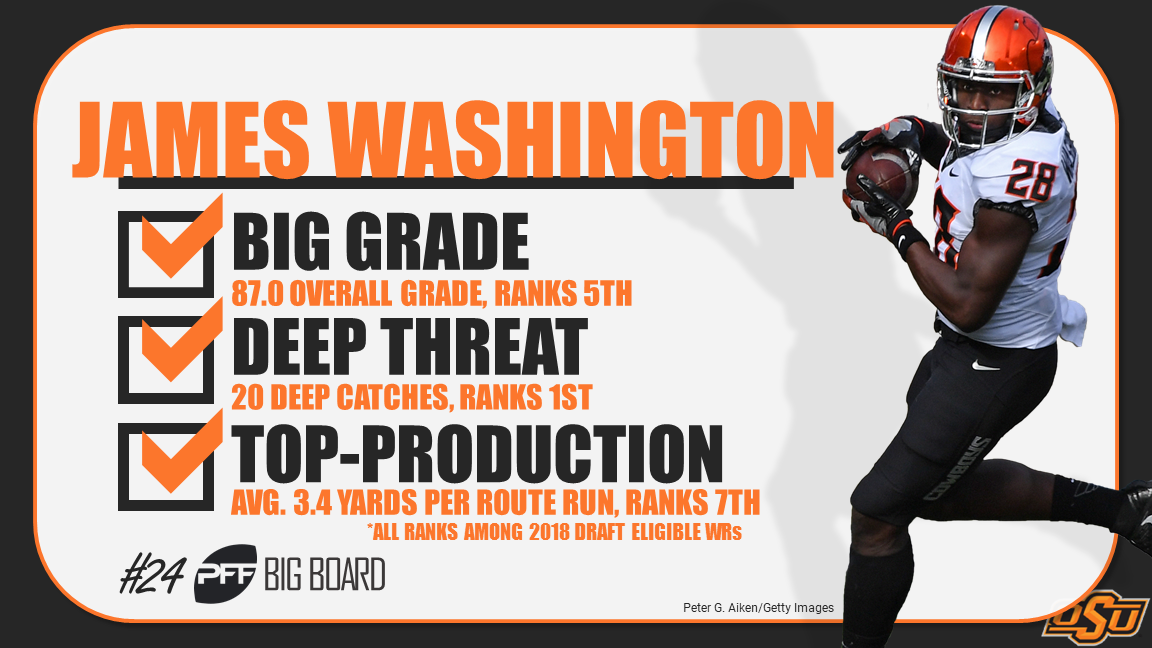 Rudolph has the draft class' top grade on third down and with Ben Roethlisberger muling retirement each and every offseason seemingly, Rudolph's presence in the building showcases the Steelers desire to have a plan for after Big Ben.

Pittsburgh added Chukwuma Okorafor from Western Michigan as another player who topped out in 2016 with his overall grade of 78.6 and seems likely to be a project at tackle. Marcus Allen from Penn State was grabbed in the fifth round as was Swiss Army knife Jaylen Samuels from NC State.

Allen finished with strong numbers in the run game but did have his issues in coverage. Samuels on the other hand is an offensive matchup nightmare for defenses if used correctly. He rushed for over 1,000 yards and had nearly 2,000 yards receiving and can play a bevy of positions.

The Steelers finished their draft class with Joshua Frazier, a lesser known commodity from the vaunted Alabama defense. He finished last season with a 75.1 overall grade and will need a strong performance in OTAs and training camp to push for time and maybe even a spot on the 53-man roster.