Draft History: Grades and stats for every first- and second-round pick since 2015 NFC West edition

Today’s series takes a look at the NFC West.

Humphries regressed a bit in 2018 after a stellar (but shortened) 2018,  but he was still effective in a league where offensive line talent is hard to come by. His 72.2 run-blocking grade ranked 11th among tackles, and he committed only two penalties on 500-plus snaps.

It’s been a rough three years for Nkemdiche, having yet to eclipse a 60.0 grade. However, it hasn’t been without a few bright spots. In 2018, his best season yet, he had two particularly strong outings: In Week 1, he had four quarterback pressures and two stops. In the best game of his career, Week 12, Nkemdiche racked up three sacks and six stops.

Reddick is on the right path to living up to his first-round billing. He allowed just 8.6 yards per reception in 2018 (18th), a facet linebackers tend to struggle in. And as a pass rusher, his 18 quarterback pressures tied for eighth among linebackers.

Baker is still coming into his own as a slot corner, and he’s dealt with some growing pains along the way. He’s yet to snag his first career interception and has allowed passer ratings in coverage above 100.0 in both 2017 and 2018. However, in 2018, he racked up 31 stops from the position, second-best among cornerbacks. 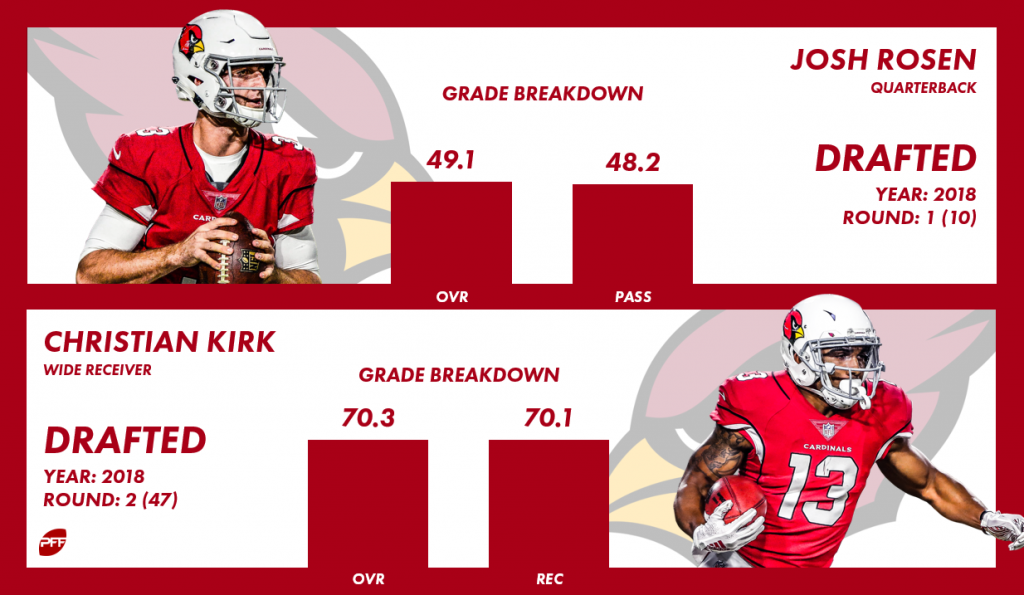 Even with a rough start to his career, Rosen is primed for a strong 2019. He was the lowest-graded rookie quarterback in 2018 but was also the most pressured at a 43.4 percent rate. Upgrades at the offensive line could provide Rosen with more to work with next year.

Kirk was the third-highest graded rookie wideout in 2018 behind 43 receptions on 65 targets. That production should carry over relatively seamlessly into 2019, as the Cardinals’ offense will likely see upgrades at key positions. 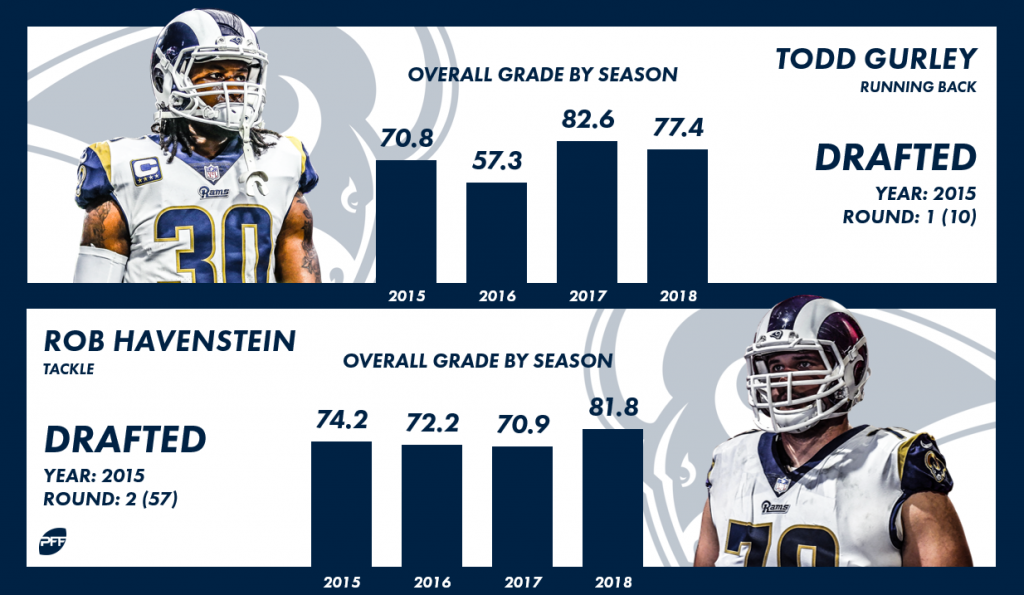 A lot can be said about Goff, but one’s thing is for sure: He has lived up to the hype as a former No. 1 overall pick. He was particularly effective when he wasn’t under pressure, notching a seventh-best 117.1 passer rating in the regular season on those plays.

Everett upped his catch total from 17 in 2017 to 35 in 2018. Nineteen of those catches went for first downs, as Everett built upon a shaky rookie year (three drops, one fumble) to become a reliable option (one drop, no fumbles) for his young quarterback.

Unfortunately for Armstead, he hasn't been able to improve upon what was a fantastic rookie year where he tallied 38 pressures on just 254 pass-rushing snaps. He did get closer to that form in 2018, though, racking up a career-high 23 stops and a 74.8 overall grade.

Tartt missed the end of the 2018 season on injured reserve, but the fourth-year safety had some positive showings. His 79.6 run defense grade ranked 12th among safeties, and he was able to hold receivers in his coverage to a respectable 10.3 yards per catch. However, missed tackles, five in 2018 on limited snaps, continue to be a problem.

The club of elite interior defenders is just about ready to welcome Buckner in. His second straight season of an 80-plus grade, in addition to 50-plus pressures in both seasons, should have the 49ers excited about what the future holds.

It’s hard to throw the bust label on a player who has barely played, but Garnett is certainly hovering around it. After missing all of 2017 due to injury, the former first-round pick played just 59 snaps in another injury-riddled 2018. In his only full season, 2016, he struggled in three major facets — pass blocking, run blocking and penalties. 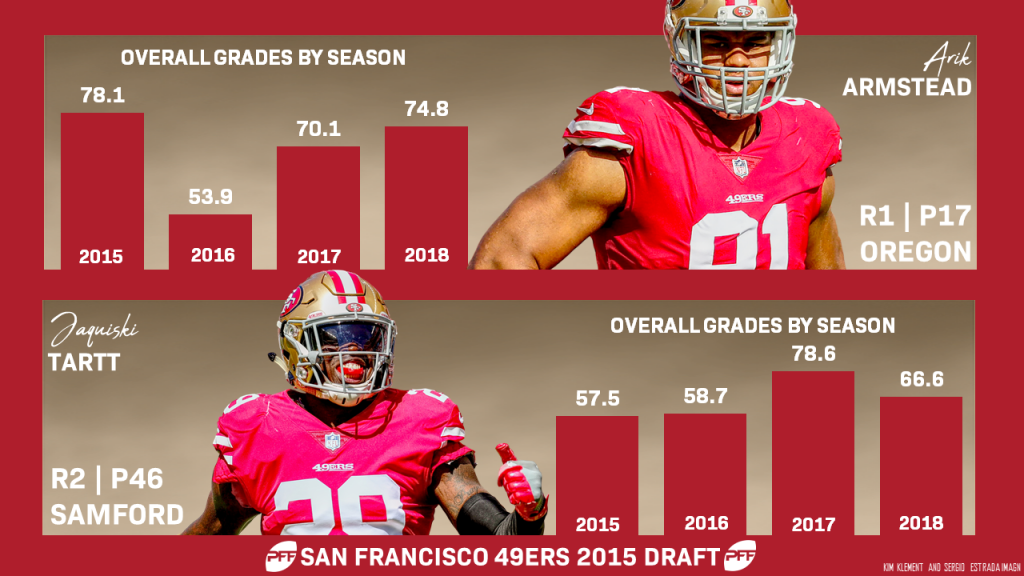 While he had only one sack to show for it, Solomon Thomas had a much-improved year in 2018. He posted five games with a grade higher than 70.0 after having three such instances in 2017. Even though the former top-five draft pick hasn’t shined as much as expected, he’s on the right track to getting there.

Foster was a star in his rookie season, and not so much in his sophomore campaign. He played in only six games due to off-the-field problems and earned an abysmal grade of 50.0 or less in four of them. That comes after a season in which he was one of the best run defenders in the league — now he’ll have to find his footing with his new team, the Washington Redskins.

It’s a known fact that offensive line talent is hard to come by — and with that in mind, the 49ers got an absolute stud by drafting McGlinchey. He was second among tackles in run-blocking grade (78.2) and was one of only two rookie tackles to play 1000 snaps. Yes, he will be in the league for a long time.

From Weeks 13 to 16, Pettis was the only receiver who generated a perfect passer rating (and had at least 10 targets). If that doesn’t tell you all you need to know about him, then nothing will. With Jimmy Garoppolo back at the helm in 2019, San Francisco may have a sneaky good air attack.

Clark’s 69 pressures in the regular season and playoffs in 2018 ranked 10th among edge defenders — better than Von Miller, Jadeveon Clowney and Myles Garrett, to name a few. He did have an extra game to surpass those big names, but he certainly earned it with his career year in 2018. 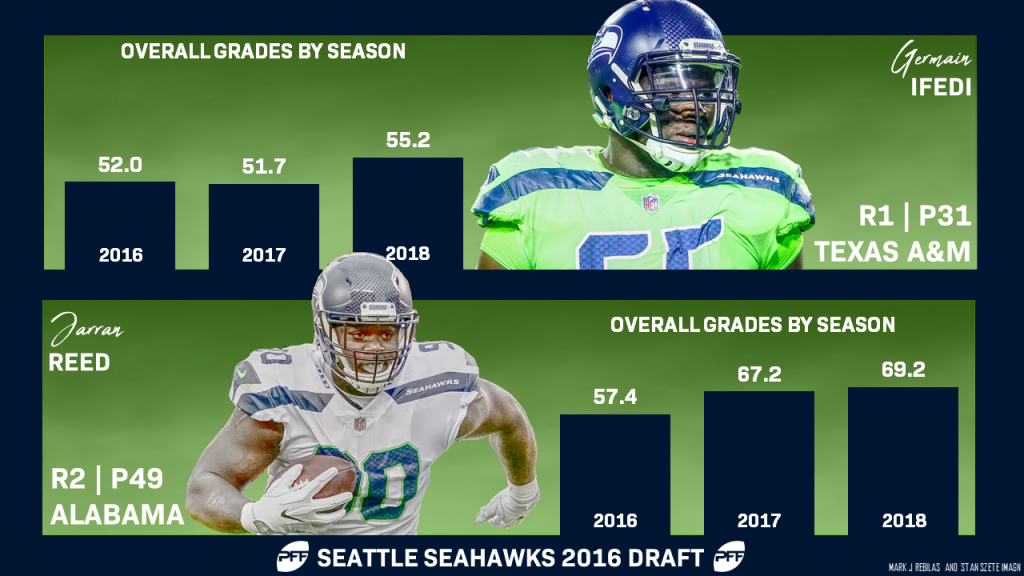 The former first-rounder just hasn’t panned out for the Seahawks. He’s yet to eclipse a season grade higher than his 55.2 mark this year, which ranked 72nd out of 82 qualifying tackles. Despite playing a ton of snaps, Ifedi hasn’t found his footing in pass blocking and has been a complete liability in the run game.

Reed did a lot of good things and not a lot of bad things in 2018. Fifty-five quarterback pressures (seventh), 39 stops (third) and 11 sacks (t-fourth), to name a few accomplishments, will get you far in the NFL. The Seahawks have to be thrilled with the way he’s developed on their line.

McDowell is currently a free agent and has yet to play an NFL snap.

Many offensive linemen fail to make the transition from the college to NFL, and it seems Pocic is on course for that through two seasons. When he has played, Pocic has been a revolving door — his 94.0 pass-blocking efficiency rating was last among 87 qualifying guards in 2018.

The future of Seattle’s backfield likely belongs to Rashaad Penny, at least for a year to prove himself. On limited snaps in 2018, he flashed potential with an average of five yards per carry and 3.34 yards after contact on average, which ranked second among rookie running backs.