Draft History: Grades and stats for every first- and second-round pick since 2015 AFC West edition

Today’s series takes a look at the AFC West.

Ray saw decreased snaps in 2018 — and likely for a good reason. After showing out in 2016 with 45 quarterback pressures, including 10 sacks, he had an injury-riddled 2017 and hasn’t quite looked the same since. Last season, he managed just 10 pressures on 138 pass-rushing snaps for a career-worst 4.0 pass-rushing productivity rating.

Having just completed his second season with the Atlanta Falcons after the Broncos traded him in 2015, Sambrailo has been a valuable depth option on the offensive line. And after earning abysmal pass-blocking grades of 40.5 in 2017 and 24.2 in 2016, Sambrailo was effective on limited snaps in 2018 — he didn’t allow a single sack or quarterback hit on 164 pass-blocking snaps. 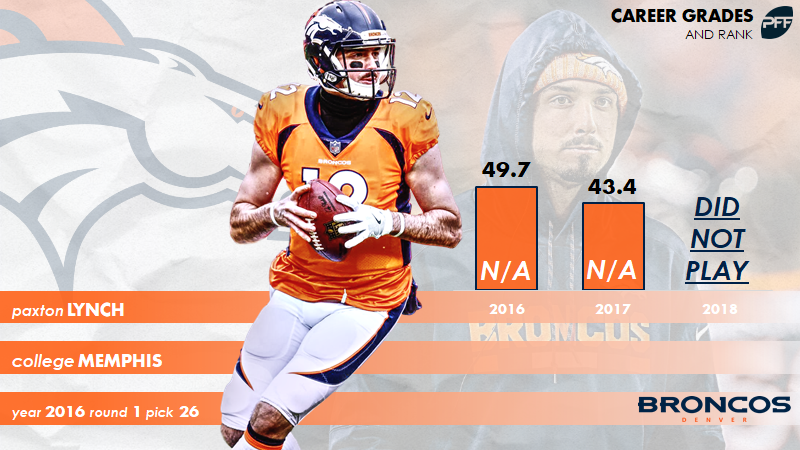 Where to begin, where to begin. Lynch simply hasn’t lived up the expectations most teams have for a first-round quarterback, which may also be why he is now with the Seattle Seahawks after two rough years in Denver. His 65.8 adjusted completion percentage in 2016 was worse than all but one starting quarterback from that year (Lynch played in only three games), and he hasn’t shown any significant development since then.

A career-best 2018 season for Gotsis should have the Broncos thrilled. His 9.3 run-stop percentage in the regular season ranked 21st among interior defensive linemen, and he notched 16 quarterback pressures and 25 stops — both higher than his marks from a season ago, where he even played more snaps.

Without accounting for snap totals, Walker was dominant in the run game in 2018. He realistically played only five snaps in run defense, but he did notch two stops. So while he saw only 21 snaps on the season, he was productive with his time on the field — which could earn him an increased role in 2019.

Welcome to the future subject of AFC West quarterbacks’ nightmares. Chubb’s 57 quarterback pressures were the most by a rookie edge defender and ranked 21st among all edge defenders. Missed tackles hurt his overall grade, but that’s fixable. His pass-rushing talent is plain frightening for opposing offensive lines and quarterbacks.

When the Broncos traded Demaryius Thomas midseason, it was a sign that Sutton was ready to take on a bigger role. But it was a bit of a shaky rookie season for the Southern Methodist product, as didn’t eclipse 100 yards in a game all season and had a 53.2 catch rate (100th out of 108 qualifying receivers) due in part to nine drops. There were some positives to build on, though, and he obviously has plenty of time to do it.

In his first season with the Rams, Peters wasn’t able to live up to his strong play a year ago. He allowed a career-worst 109.7 passer rating in coverage and 68.5 percent catch rate. In 2017, though, he was stellar — he gave up just a 60.9 passer rating in coverage and a 57 percent catch rate. He’ll hope to return to that form as the Rams go for another Super Bowl run in 2019.

Morse has been a machine for the Chiefs in recent years. He hasn’t given up a sack since his rookie season, and in 2018, on 534 pass-blocking snaps, he allowed just five pressures. That resulted in a 99.5 pass-blocking efficiency, second among all centers in the regular season. Mitch Morse has become quite the stalwart on the Chiefs’ line. 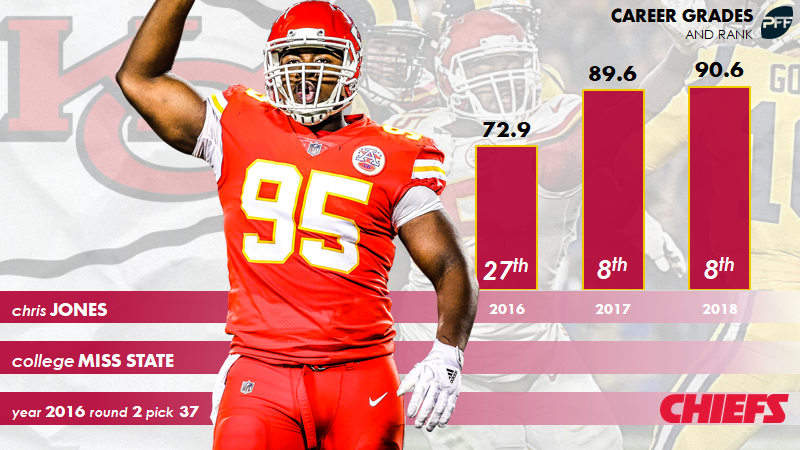 What a year it was for Chris Jones. After posting an 89.7 grade in 2017, it seemed nearly impossible that he would get even better. But he did — and by a lot. Jones’ 79 quarterback pressures ranked third among interior defensive linemen. Jones had 81 pressures combined in his first two seasons, so that should tell you all you need to know about how dominant he was. 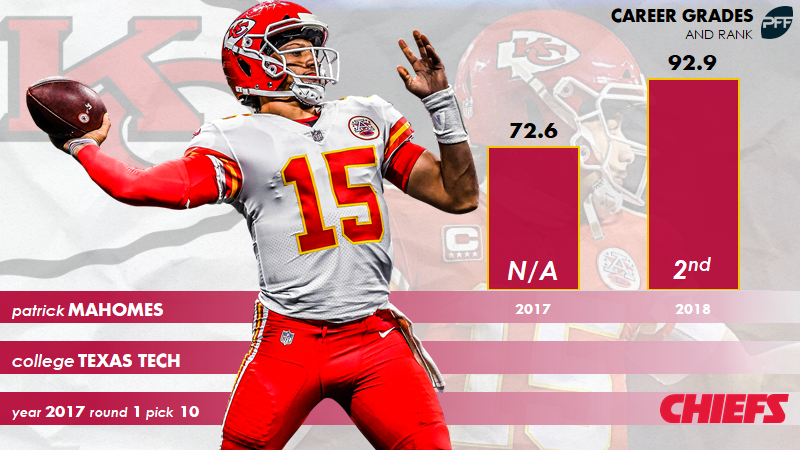 Judging from 2018 alone, Mahomes is far and away the best draft pick on this list. The second-year quarterback collected some big-time hardware at the end of the season for his efforts, which included the best passer rating in a clean pocket (134.2) and tied for the most deep passing touchdowns (15).

Kpassagnon has played less than 200 snaps in each of his first two seasons. This year, he was able to make his mark in the run game, where he earned a solid 75.6 grade. He provides decent depth for the Chiefs but has otherwise been expectedly quiet on limited snaps.

Speaks was thrown into the fire immediately, playing an impressive 522 snaps in his rookie season. He racked up 23 quarterback pressures and 14 stops. While those are relatively low totals for his snap count total, Speaks has a bright future ahead of him as he continues to acclimate. 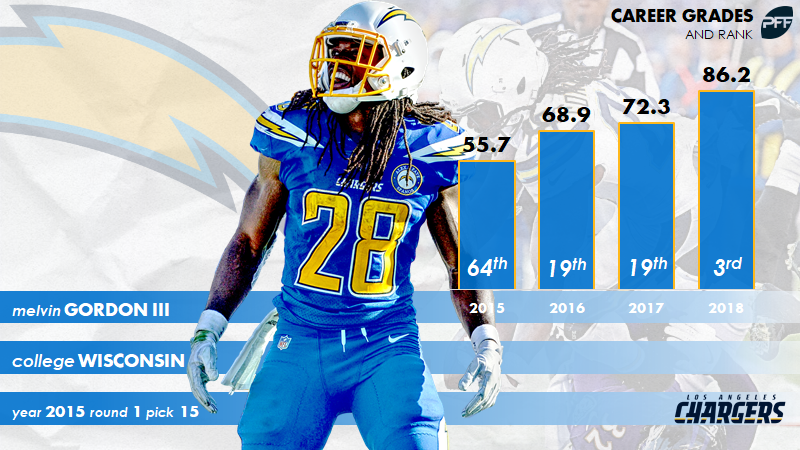 There isn’t much Melvin Gordon can’t do. He showed off his elusiveness in 2018 (41 missed tackles forced on rushing attempts) and broke off 15 runs of 15 or more yards (tied for seventh). Not only that, but he’s also improved his overall grade every year since he was drafted — a difficult feat that bodes well for 2019.

In a league where good cover linebackers are hard to come by, Perryman has shined. He’s lowered his passer rating when targeted each year since 2015, and in 2018, his 87.3 mark ranked 13th among off-ball linebackers. 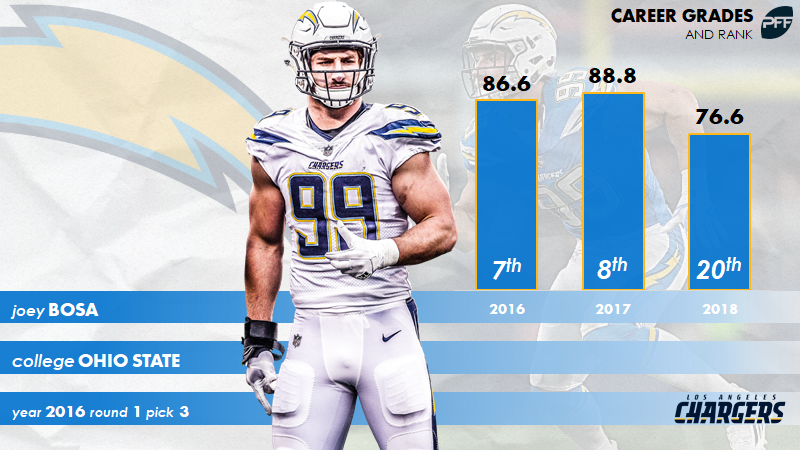 Bosa has been the guy the Chargers hoped they were getting when they used the third overall pick on him three seasons ago. And with an 86.6 overall grade in 2016 and an 88.8 grade in 2017, Bosa has maybe even exceeded expectations. Last season was a down year for the edge defender, but he was still able to notch 37 quarterback pressures in his limited time on the field.

A dream start to Henry’s career was momentarily derailed in 2018 by a preseason injury. After posting 80-plus grades in each of his first two seasons, though, Henry should be ready to factor in a dynamic offense in 2019. In 2017, he ranked third among tight ends in yards per route run (2.05) and dropped just three of his targets.

Lamp has played just 17 snaps in his two-year career, having yet to allow a quarterback pressure. Injuries stopped him from getting the playing time he deserves, but he’ll likely see an increased role sooner rather than later.

Meet the star of the AFC West 2018 draft class. James was the seventh-highest graded safety in 2018; he earned the third-highest coverage grade (89.7), the second-most quarterback pressures (19) and the second-most stops (40) among players at the position. He’ll be wreaking havoc in this division for a long time.

Nwosu fit in extremely well on a crowded Chargers defensive line. He often earned game grades of 70-plus and frequently notched a pressure on the 10-30 snaps he usually received in a contest. That efficient play puts him in line for more playing time ahead.

Edwards had regressed in each of his years following his rookie campaign in Oakland, prompting the Raiders to let him go. The Giants picked him up, and he subsequently earned his first 70-plus overall grade since his rookie season. He didn’t have much production — 11 pressures and four run stops — but he was consistent. 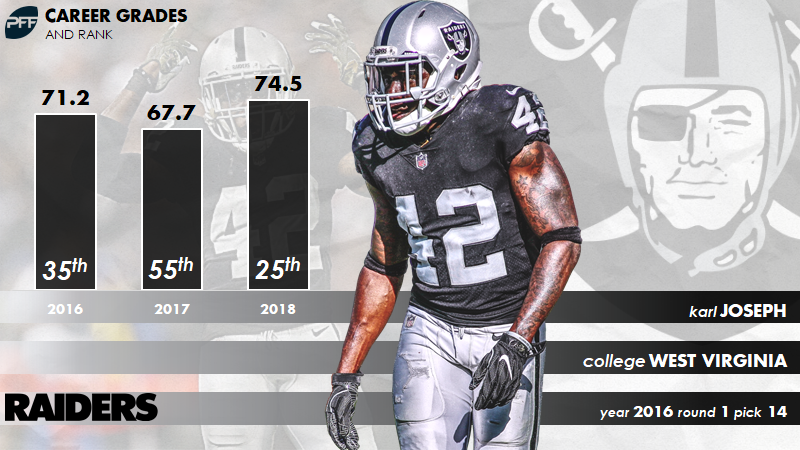 After missing 13 tackles a season ago, Joseph missed just four in 2018 — part of the reason why he earned the best overall grade of his career. He also saw only nine targets in coverage, a stark difference from the 37 he saw in 2017. 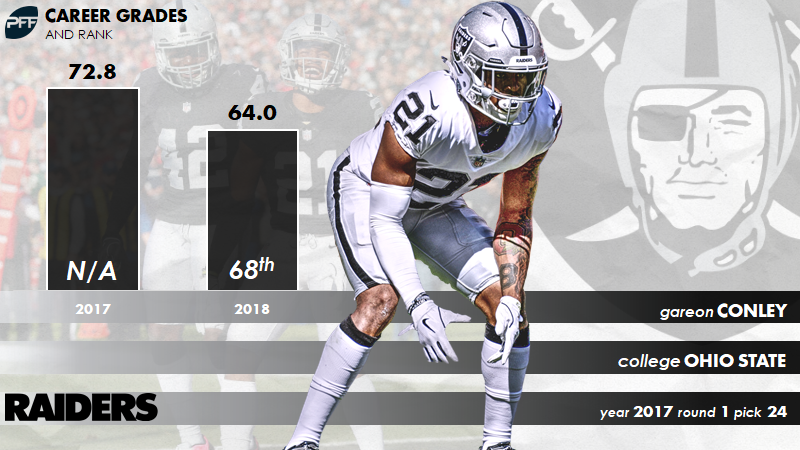 Conley did well in coverage in 2018, allowing a 72.8 passer rating when targeted, which ranked 14th among qualifying cornerbacks. He also allowed only 54% of his targets to be completed, the 19th best mark among corners.

The Raiders surprisingly gave up on Melifonwu after an injury-riddled year. He was lucky enough to win a Super Bowl this year with the Patriots but played only 20 snaps all season.

When you spend a first-round pick on an offensive lineman, you expect him to contribute right away. Miller, though, had a disastrous rookie campaign. His overall grade ranked 81st among 85 tackles, and he gave up four more sacks than the next closest tackle. There’s plenty of time for Miller to put this season behind him — and he better do so quickly.

Hall earned a respectable 512 snaps in his rookie year, and he did well when on the field. He notched 15 quarterback pressures and 12 stops en route to a 65.9 overall grade — 11th among rookie interior defensive linemen.