It’s no secret the Carolina Panthers struggled to get after the quarterback last season. They finished the year with PFF’s 24th ranked pass-rushing grade (67.0) and recorded just 254 total team pressures, tying for the seventh-fewest during the regular season.

Burns is expected to make an immediate impact off the edge after leading all draft-eligible defenders in pressures (66) in his final collegiate season at Florida State. Irvin is looking to have a bounce-back year after posting the lowest overall grade (59.0) of his seven-year career.

Both are likely to see plenty of opportunities opposite Panthers veteran edge defender Mario Addison, but that doesn’t mean anyone should be sleeping on Carolina’s fourth-round pick.

Miller may have seen far fewer snaps (676) during his four-year career at Alabama than Burns did in just three seasons with the Seminoles (1,899), but that doesn’t mean he was any less efficient. In fact, Miller made the most of his chances, proving himself a valuable addition for any NFL franchise.

He entered the 2019 NFL Draft with the fifth-best pass-rush productivity rate (12.1) of any edge defender with a minimum of a 150 pass-rush snaps. In his final season in Tuscaloosa, Miller recorded 10 sacks, 10 quarterback hits and 19 hurries on just 203 pass-rushing snaps.

He displayed explosiveness off the line of scrimmage in the SEC and showcased his ability to shed offensive tackles with the use of his hands.

Prior to the joining the Panthers in the 2019 NFL Draft, Miller spoke with our very own Austin Gayle about his versatility and pass-rush technique.

“I think the hand combat is really important. It all starts with a good get-off; that’s one of the biggest things. But the hand combat helps me out a lot. I have violent hands, and I know how to use them really well.”

The Panthers are surely hoping Miller can put those violent hands to work in his rookie season, and they would be wise find him snaps, especially late in games. The 6-foot-3, 245-pound edge defender dominated the fourth quarter, posting the best pass-rush win percentage (33.3%) and pressure percentage (37%) of any draft-eligible defender from the SEC with a minimum of 25 fourth-quarter pass-rush snaps. 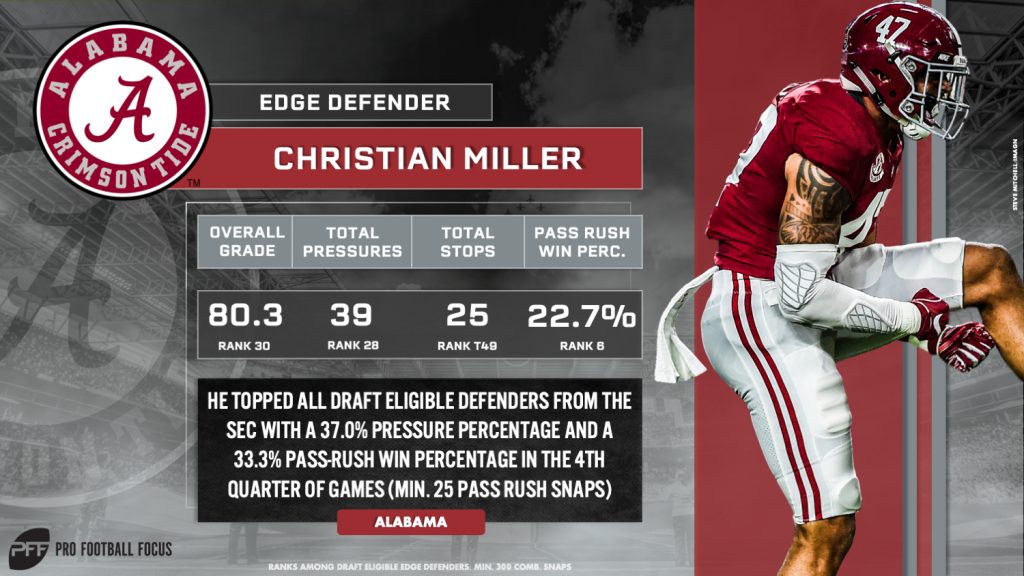 And while Miller is sure to make an impact against opposing quarterbacks at the next level, he is not just a one-trick pony. He has shown the ability to be an all-around player, recording the 38th-best run-defense grade (77.0), the 46th-most defensive stops (25) and the 14th-best tackling grade (81.8) among draft-eligible edge defenders with at least 150 total snaps.

The fourth-round pick’s biggest weakness may be his ability to drop in coverage, but even there, Miller still earned a 68.3 grade, placing him 63rd among edge defenders.

The Panthers will undoubtedly get their first-round pick, Burns, snaps early and often in his rookie season. The FSU prospect has a high ceiling at the next level, and he just began scratching the surface in Tallahassee.

However, all the expectations are on Burns to perform in his rookie campaign. PFF's Lead Draft Analyst Mike Renner listed him as the fourth-best candidate to win Defensive Rookie of the Year in 2019.

The No. 16 overall pick will surely have the opportunity to make an immediate impact, but there’s also no doubting the value Carolina got at No. 115 overall in Miller. He may be an afterthought when looking at all the moves the Panthers made this offseason, but if his time at Alabama taught us anything, it’s that Miller just needs a chance to prove himself.