For those who aren’t familiar yet, Damon “Snacks” Harrison has long been one of our highest-graded run defenders at the interior defender position. In fact, since the 2015 season, Harrison has finished with the top run-defense grade among interior defenders every single year. Sometimes when players move from one team to another, they see a drop-off in their performance, but Harrison isn’t one of those guys; he has moved from the Jets to the Giants and most recently the Lions, and he’s still snacking on offensive linemen. 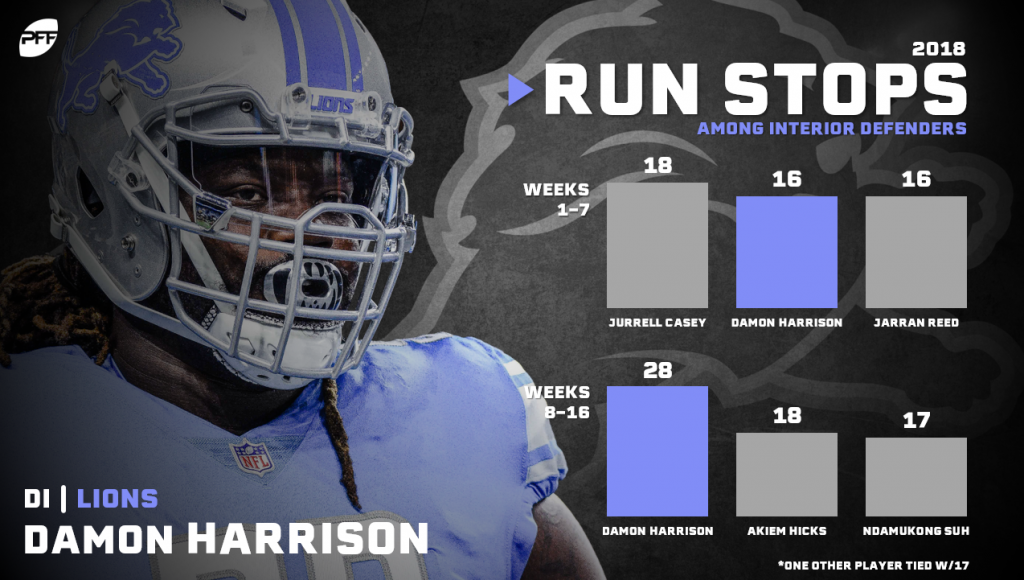 From weeks 1-7, before being traded to the Lions, Harrison had a run defense grade of 91.5, ranking fourth among interior defenders. In that period, he accumulated 16 run stops (tackles for loss or short gain), which was tied for the second-most at his position. If you consider the fact that Harrison played against teams like the Cowboys and Saints during that time span, it just makes it all the more impressive.

After being traded to the Lions before Week 8, some may have wondered if he would be the same. If anything, he was more than the same, as he recorded six run stops in his first game with the Lions, tied for the most run stops in a single game this season and that game just so happened to be against the Seahawks, who lead the league in rushing yards this year. Harrison has put up 31 run stops since going to Detroit, ranking first in the NFL during that span.

Damon Harrison has been snacking on linemen and running backs wherever he goes. It’s just too bad that not enough people seem to know the extent of his dominance, which is evident by the almost unbelievable fact that he's still yet to be selected to the Pro Bowl. However,  here at Pro Football Focus, where we watch every player on every play of every game, he has long been established as one of the truly elite interior defenders in the world.