He played quarterback and linebacker in eight-man high school football in Riggins, Idaho – a city of sub-500 residents – before walking on at Boise State. Now, five years and one strong collegiate season late, first-round pick  Leighton Vander Esch is the highest graded (88.2) rookie defender through Week 5 of the 2018-19 season.

In the first three games, Vander Esch only saw the field for a total of 77 snaps, but the latest Sean Lee injury put him in the starting lineup. In turn, he’s basically not come off the field the past two weeks, playing 130 of a possible 134 snaps. On the season, he now has 16 stops, a run-stop percentage of 11.9 and only one missed tackle. His 88.2 overall grade ranks second behind Seattle Seahawks‘ veteran Bobby Wagner, and his run-defense (85.1) and coverage (81.4) grades rank third and sixth, respectively, among NFL linebackers with 125-plus defensive snaps on the year. 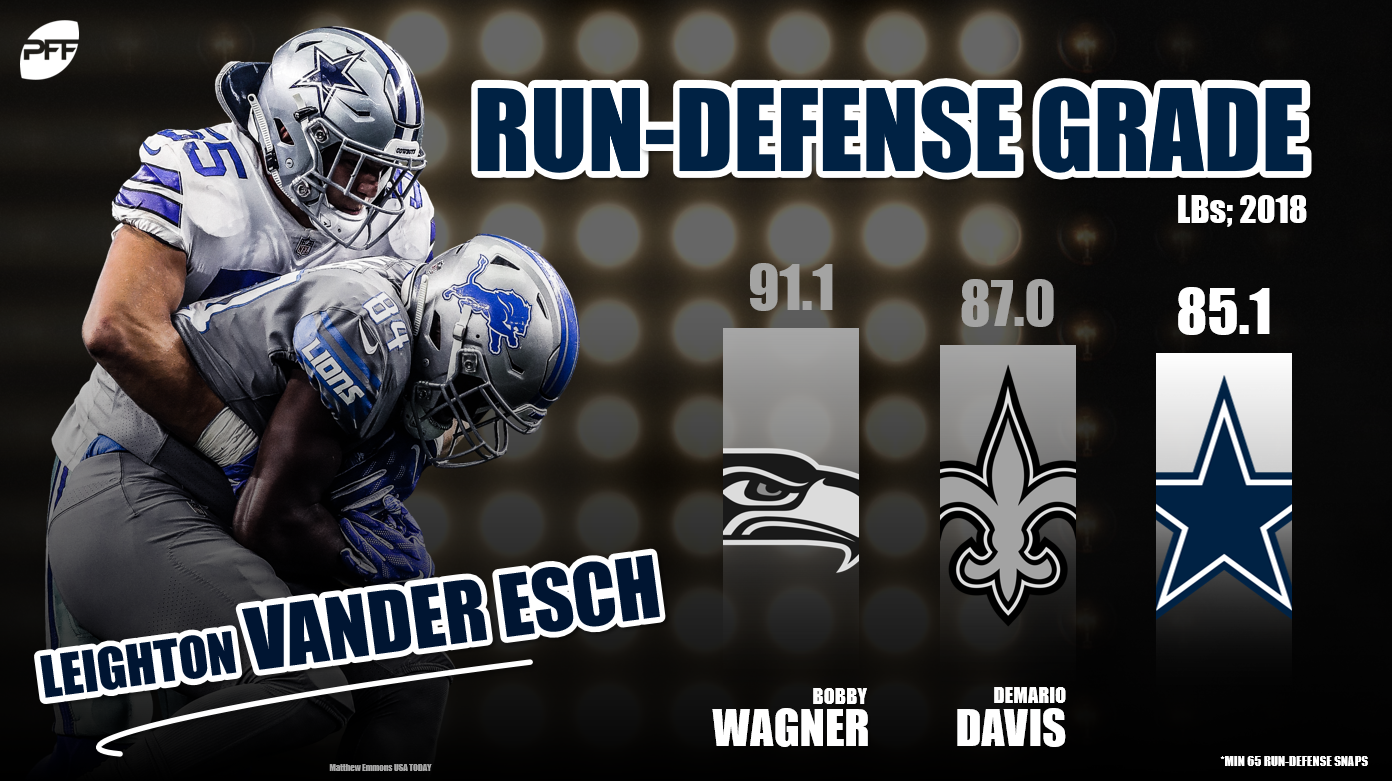 In Week 5, Vander Esch recorded a league-high 12 combined tackles and seven defensive stops against the Houston Texans. He also allowed eight receptions from nine targets but for just 58 yards (38 yards after the catch).

So far this season, Vander Esch has allowed receptions on 16-of-17 targets for 103 yards and a touchdown, but he's done a great job of limiting pass-catchers after the catch. He ranks ninth among off-ball linebackers with 75-plus coverage snaps in yards after the catch allowed per reception allowed (3.75)

Vander Esch's recent dominance doesn't come as a surprise, either.

After only 265 snaps in his first three seasons with the Broncos, Vander Esch had a breakout redshirt junior season, earning the Mountain West Conference Defensive Player of the Year and putting himself at No. 26 on our 2018 Draft Board. He led all FBS inside linebackers in both run stops (57) and run-stop percentage (15.9). This, along with his size and speed combination, led the Dallas Cowboys to select him 19th overall in the 2018 NFL Draft.

What will the Cowboys do when Lee is healthy?  Based on Vander Esch’s and the play of fellow off-ball linebacker Jaylon Smith (74.4 overall grade), it'll be a good problem to have for Dallas' defense. The Cowboys appear to have drafted an answer for both now and the future.