Landing the 2018 NFL Draft’s No. 10 overall selection for the 62nd overall pick in 2019 and a 2020 fifth-rounder was a slam dunk for the Miami Dolphins, but it shouldn’t keep the Miami faithful from celebrating Wilkins, the Fins’ 2019 first-rounder. 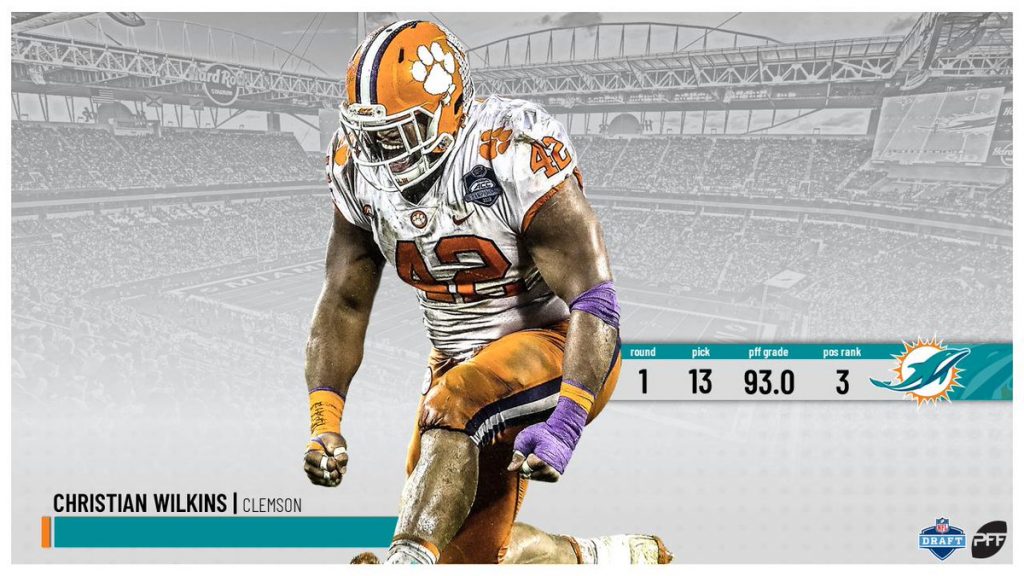 A former five-star recruit with an illustrious collegiate career at Clemson, Wilkins is a freakishly athletic defensive interior for his size (6-foot-6, 315 pounds) that wins with great burst and quickness off the snap. With favorable traits and improved technique in Year 4 of his Tigers tenure, he earned a career-high 93.0 overall grade in 2018, ranking third among the 227 draft-eligible defensive linemen with 400 or more defensive snaps played this past season.

Wilkins’ historically dominant overall grade is propped up by strong pass-rushing and run-defense grades, as he also ranked third among qualifiers in 2018 in run-defense grade (93.6) and seventh in pass-rush grade (91.0).

Rushing the passer, Wilkins will surprise interior offensive linemen with his explosive get-off and beat his opposition quickly as a result. Recording 56 pass-rush wins and 47 total pressures in his 336 pass-rushing snaps, he ranked third at his position in this year’s draft class in pass-rush win rate (16.7%).

And it’s safe to expect much of the same from Wilkins against the run. He was the first to make contact with the ball carrier on 15.08% of his run-defense snaps in 2018, the fifth-highest mark among interior defensive linemen in this year’s draft with 200 or more run-defense snaps on the year.

Wilkins is also very good in critical situations, as he earned an impressive 90.0 overall grade on third and fourth downs this season (188 total defensive snaps). Only new Los Angeles Chargers defensive interior Jerry Tillery (91.1) and Minnesota Vikings’ Armon Watts earned higher overall grades than Wilkins in said situations. Wilkins did, however, lead the group in run-defense grade (91.0) on critical downs, logging a class-high five tackles for loss or no gain in the process. 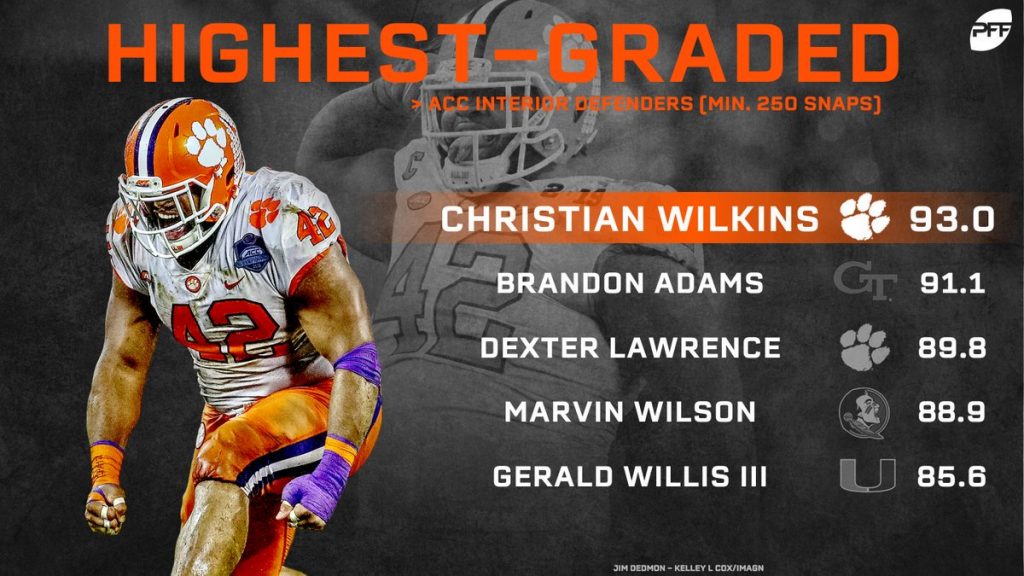 Defending the run, Wilkins was stout regardless of pre-snap positioning. He earned 81.0-plus career run-defense grades at nose and edge defender while also logging an elite 90.4 run-defense grade at three-technique.

Former Oklahoma State standout and 2017 sixth-round pick Vincent Taylor finished the 2018 season as Miami’s highest-graded defensive interior at 76.3, but his season was cut short due to a foot injury that landed him on the Injured Reserve after Week 8. Third-year defensive interior Davon Godchaux finished second behind Taylor with his 74.3 overall grade across 675 defensive snaps. However, even the best of the Dolphins’ interior defensive line (i.e., Taylor, Godchaux) was a liability on passing downs.

Both Godchaux and Taylor earned sub-70.0 pass-rush grades in each of their two seasons in the NFL; Wilkins enters the fold as an immediate upgrade as an interior pass-rusher and should also hold his own if not improve the team’s run defense, as well.

Wilkins should start ahead of either Godchaux or Taylor immediately as a three-down player in 2019, but he won’t have as much help around him like he did at Clemson. He trades collegiate standouts Clelin Ferrell and Dexter Lawrence for Johnathan Woodard and Charles Harris with his move to Miami. He’ll undoubtedly see more double-teams than he saw at Clemson, which lowers his Year 1 ceiling in terms of production, but his potential beyond 2019 if the Dolphins continue to add talent to their trenches in the coming years is sky-high.