NEW ORLEANS, LA - OCTOBER 16: Drew Brees #9 of the New Orleans Saints throws the ball during the second half of a game against the Carolina Panthers at the Mercedes-Benz Superdome on October 16, 2016 in New Orleans, Louisiana. (Photo by Jonathan Bachman/Getty Images)

Here are the top-graded players and biggest storylines from the Saints’ nail-biting 41-38 win over the Panthers.

Drew Brees was his typical elite self, as he exploited matchup issues throughout the game that were created by Carolina’s lack of depth due to injuries. His stat lines of 35 completions to 50 attempts sound excellent enough, but when considering that four of his incompletions were drops and another six were throwaways, spikes or passes when he was hit as he threw, his game becomes even more impressive. Essentially he completed 39 of 44 aimed throws, and even his interception looked to be an instance of WR Brandin Cooks making too shallow of a cut on his post pattern. 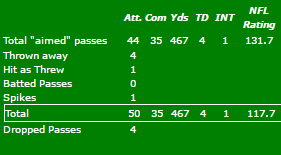 The Saints were without as many as three of their top cornerbacks at various parts of the game, which resulted in linebackers like Shaq Thompson being stuck on an island with Saints playmakers. With Brees on such a roll, it’s difficult to spotlight just one or two standouts in the receiving corps, but Cooks and Michael Thomas stood out the most. Cooks caught 8 of his 10 targets for 175 yards and an 87-yard score, while Brees had a perfect 158.3 QB rating when throwing to Thomas (he caught all five targets for 78 yards and a touchdown). The offensive line gave up 10 hurries but just one sack and two hits, and as a result Brees was able to stay clean throughout the day and negotiate the pocket to successfully buy time.

It was a dominant all-around day by Cameron Jordan

Whether it were a run or pass play, the Panthers struggled to effectively block Saints DE Cameron Jordan. When rushing the passer, he notched two hits, four hurries and batted down a pass, and all four of his tackles in the run game went for stops. Elsewhere, safety Kenny Vaccaro had a strong day, as he posted three pressures of his own to go with seven total tackles. He was charged with three receptions allowed (and a penalty), but he limited his man to just 31 yards total on those catches.

While his deep ball was off today (he completed just one of seven shots at least 20 yards downfield), Cam Newton was able to carve up the Saints’ secondary on intermediate throws. He completed 12 of 18 throws that traveled between 10 and 19 yards through the air, for 172 of his 327 passing yards. His touchdown run in the waning minutes of the game was his only run on the day, which could be a sign of the Panthers wanting him to avoid taking unnecessary hits after his concussion two weeks ago.

WR Kelvin Benjamin had one of those frustrating games he’s prone to having, as he dropped two passes and mistimed his jump on another ball that fell incomplete. TE Greg Olsen caught six of his seven targets against five different defenders, the shortest of the collection still going for 11 yards. While tackles Mike Remmers and Daryl Williams combined to give up a sack and seven total pressures, the three interior lineman each posted clean sheets in pass protection.

Forced to play 51 snaps due to injuries in the secondary (most notably CB Daryl Worley), rookie Zack Sanchez was a repeated victim of Brees’ brilliance. He gave up seven catches on nine targets, including Cooks’ 87-yard touchdown and TE Josh Hill’s 8-yard touchdown. Brees had a perfect QB rating when targeting Sanchez. As usual, linebackers Luke Kuechly and Thomas Davis always seemed to be involved in the action, as the duo combined for 13 solo tackles, four stops and two pressures.