BREAKING: Ben Roethlisberger OUT for the 2019 season with right elbow injury

Things are going from bad to worse in Pittsburgh.

Per Ian Rapoport, Pittsburgh Steelers quarterback Ben Roethlisberger will require surgery on his throwing elbow and will miss the rest of the season as a result. Big Ben’s 2019 campaign comes to an abrupt close after completing 35-of-62 attempts for 351 yards, one interception and zero touchdowns across 65 dropbacks in two games.

Roethlisberger entered the season as PFF’s eighth-ranked quarterback in the NFL. From PFF Senior Steve Palazzolo in his quarterback rankings article published prior to the 2019 season:

“It was an odd 2018 for Roethlisberger, who posted his fifth-worst grade since 2006 while throwing for over 5,000 yards. This disconnect is his throwing the ball a whopping 675 times to put up strong counting stats, but his throw-for-throw consistency just wasn’t there as he finished with the sixth-highest percentage of negatively graded throws. As usual, Roethlisberger still had the big-time throws in his game, finishing second overall in total big-time throws and fifth in big-time throw percentage, so he’s still more than capable of taking over a game. For Roethlisberger to get back to his 2014, 2015 and 2017 ways that saw him finish third in overall PFF grade, he needs to cut back on the misses and poor decisions that plagued his 2018 season.” 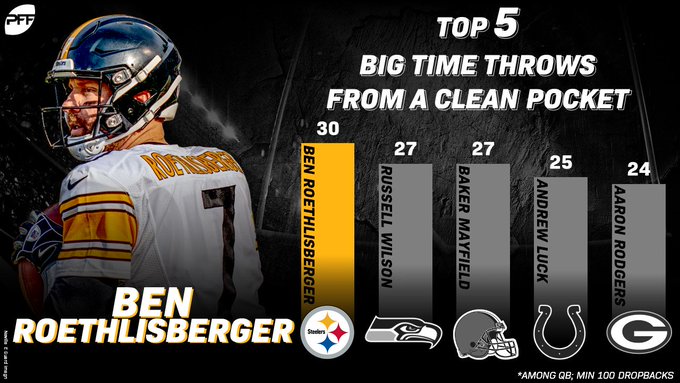 With Roethlisberger sidelined, the Steelers will turn to second-year third-round pick Mason Rudolph to start under center. The 6-foot-5, 235-pound Oklahoma State product has earned just a 65.1 passing grade across 20 regular-season dropbacks in the NFL, completing 12-of-19 passes for 112 yards, two touchdowns and an interception in the process.

Moving to a larger sample size, Rudolph was an absolute stud at the collegiate level. He finished his final year with the Cowboys (2017) ranked seventh among all FBS signal-callers in passing grade (86.9). He completed 319-of-490 passes for 4,908 yards, 37 touchdowns and nine interceptions that season as well, and he recorded 29 big-time throws and 15 turnover-worthy plays.

Prior to the 2018 NFL Draft, PFF’s Cam Mellor had this to say about the Steelers’ new starter under center:

“He may not be receiving as much first-round hype of the other quarterbacks in the front-end loaded 2018 NFL Draft QB class, but Rudolph has more than proven he deserves to be mentioned in the same breath as his counterparts. His ability on downfield throws combined with his ability to scan his progressions and hit targets from a clean pocket all could translate to plus-grades at the NFL level.”

Rudolph will need those plus-grades to translate at the NFL level in a hurry if Pittsburgh is going to rally from an 0-2 start and chase a playoff berth in 2019.