The Cincinnati Bengals performed an incredible comeback on Sunday against the Miami Dolphins, scoring 27 unanswered points to give them the lead late in the fourth quarter. With the game on the line, Ryan Tannehill dropped back and let one rip, targeting a post route over the middle. Seemingly out of nowhere, Bengals rookie Jessie Bates flew in front of two Dolphins’ receivers to corral the ball, snagging his second interception of the season and sealing the game for the home team.

Much like his highlight play from Sunday, Bates has seemingly come out of nowhere and injected himself into the conversation for one of the best safeties in the league. Coming out of Wake Forest, Bates’ 84.9 run-defense grade was ninth-best among draft-eligible safeties who played at least 50% of their team’s snaps, and his four pass breakups and 64 tackles ranked 14th and 17th, respectively.

The Bengals had high hopes for Bates when they selected him in the second round of the draft this year, believing he could eventually become a quality safety who could play single-high and give them more flexibility on defense. The willingness to cut long-standing veteran George Iloka signified that the rookie had not only met expectations, but exceeded them, and was ready to take over a starting spot from the beginning of the season.

In his season debut, Bates racked up eight tackles, two defensive stops and allowed three receptions on three targets – for just a total of two yards. The following week against the Baltimore Ravens, the rookie displayed the ability that made him such an intriguing prospect. Bates was in single-high coverage and read Flacco’s eyes, diagnosed the play and shot toward the crossing route in front of him, seemingly before Joe Flacco had even decided to throw the ball. The ball was a little overthrown, as Flacco was trying to lead his receiver, but Bates was essentially waiting on the pass at that point and easily snagged his first NFL interception. 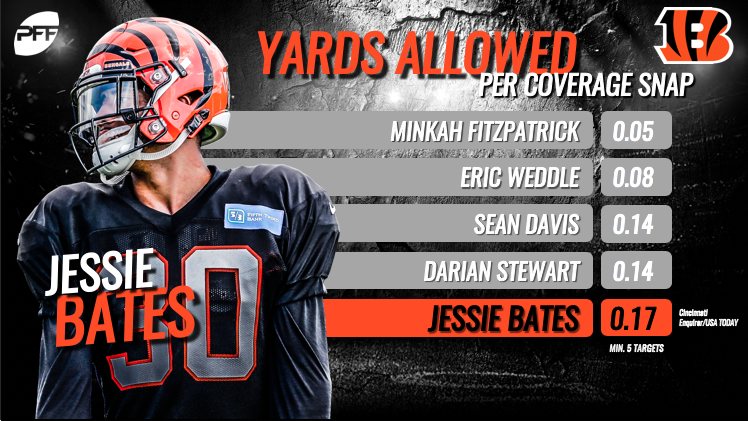 To say that Bates appears to be coming into his own would be an understatement. His 91.1 grade against the Dolphins in Week 5 was his highest of the season and ranked second among all safeties. Through five weeks, he already has as many interceptions as he did in college, has been top-three in tackles for the Bengals four times and played a whopping 98% of the team’s snaps – the most of any Bengal. The impact that he has had on this defense as a tackler and in coverage cannot be understated. He has accrued 27 total tackles (8th) and two interceptions (T-2nd) while allowing a passer rating of just 58.8 on throws into his primary coverage. Bates has been targeted five times, allowing four receptions for 38 yards, 36 of which came on one play, and among safeties who have been targeted at least five times, Bates’ 0.17 yards per coverage snap ranks fourth. Bates’ 83.9 grade for the season places him as the sixth highest-graded safety, and his coverage grade of 81.1 is good for fifth.

It has only been five weeks, but Jessie Bates has looked like one of the top five safeties in the league when he is at the top of his game, impacting both the run game and passing game. If the rookie continues on his upward trajectory, the Bengals may have found themselves a real gem in the second round of the draft.