Amid injury concerns, Panthers QB Cam Newton has been forced away from the deep ball

Standing at a massive 6’5”, running a sub-4.6s 40-yard dash and able to chuck the ball 80 yards downfield, Carolina Panthers quarterback Cam Newton wowed scouts coming out of Auburn with a combination of size, speed and arm strength that had rarely been seen at the position.

Adding to the lore of his superhuman facade, the Panthers signal-caller has only missed five games in his NFL career; the first of which didn’t occur until the 2014 season opener, and the most recent being the final two games of the 2018 season after Newton was shut down due to a nagging shoulder injury.

This longevity is all despite rushing the ball more than 925 times since entering the league, nearly 300 more than the next closest quarterback in the PFF era (since 2006). That has led to 2,287 rushing yards after contact (first by 1,029 yards) and 103 missed tackles forced (first by 37). 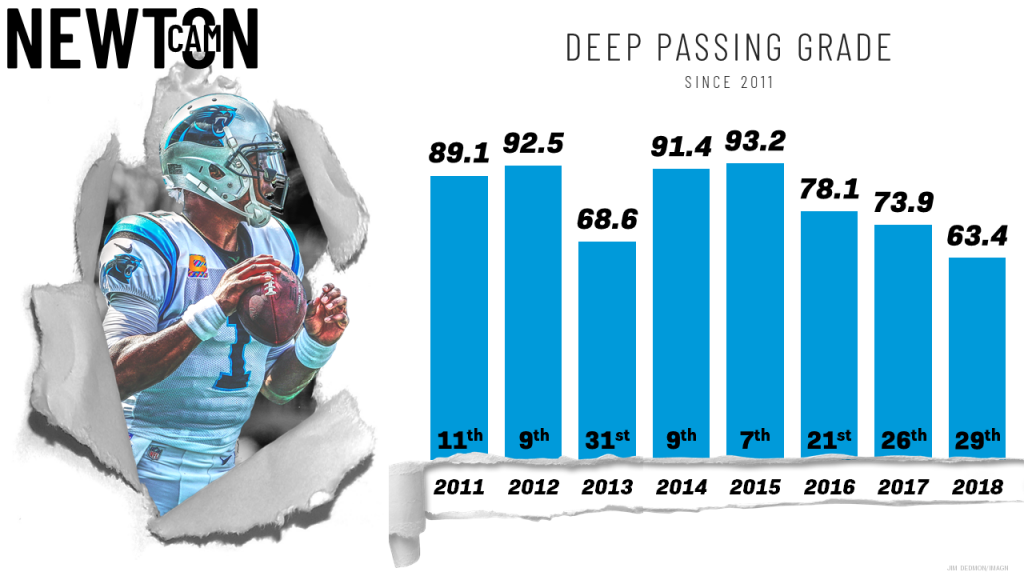 With that said, it’s hard to know if the repetitive hits taken by the former Heisman Trophy winner have taken a toll and contributed to the recent injury concerns. The past three seasons have seen Newton’s most rushes in a season (139 in 2017) sandwiched between the two lowest totals of his career (90 in 2016, 101 in 2018). Combine that with the 98 times Newton has been sacked in that span — the ninth-most by a quarterback — and it's not hard to realize that his body has seen its fair share of abuse.

If one thing was obvious in 2018, it was that Newton wasn’t a 100% healthy for a large portion of the year. With doubts over his ability to send the ball deep, there were multiple occasions last season when the Panthers replaced the former MVP with backup Taylor Heinicke for obvious “hail mary” situations.

That hasn’t always been the case for Newton and the Panthers. From 2011-15, the ground-and-pound Panthers only put the ball in the air 49.5 percent of the time (third-fewest). But when the team did put the ball in the air, it was to target deep downfield. Carolina’s deep pass (passes of 20 or more yards downfield) attempt percentage of 14.2% ranked second in the NFL during that span, and out of the 35 quarterbacks with at least 1,000 attempts from 2011-15, Newton ranked first with an average depth of target of 10.0 yards downfield. 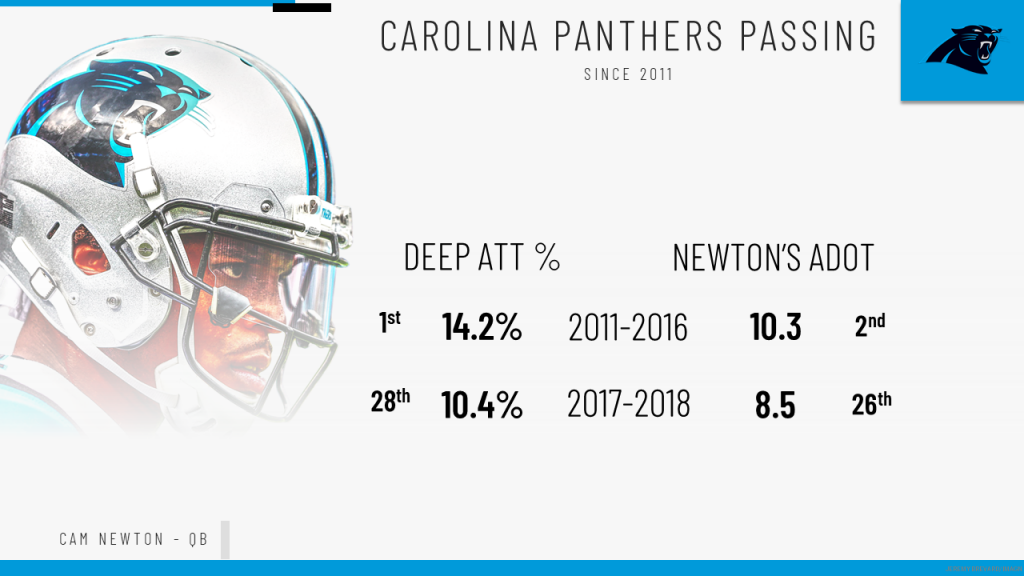 Not only did he target downfield early and often, but he was also one of the more successful quarterbacks when doing so. The former No. 1 overall pick earned an 89.0 passing grade or better on deep passes in four of his first five seasons in the league, culminating in a 94.4 passing grade over that time which was ninth-highest among quarterbacks in that span. As expected with the high deep-pass rate, the former Auburn Tiger ranked in the top-10 among qualifying quarterbacks in a handful of passing categories, including deep passing yards (4,048), deep passing touchdowns (37) and deep passer rating (97.4).

Early in his career, Newton leaned heavily on his wide receivers with the likes of Ted Ginn Jr., Brandon LaFell and established veteran Steve Smith Sr. running downfield. From 2011 through Newton’s sophomore season of 2012, he and Smith were a match made in heaven and generated a passer rating of 117.1 together on deep passes, the fourth-highest mark among tandems in that two-year period.

Fast forward past two shoulder injuries and Newton’s all-around production has dropped drastically over the previous two years. As the shoulder injuries accumulated, the former MVP went from a top-10 deep passer in the league to the 30th-ranked deep passer, and in the past two years, the Panthers' team deep-target percentage dropped to just 10.4% — the 28th-highest in the NFL. Newton’s deep pass attempt rate has dropped in each of the past three seasons, and it reached below 11.0% for the first time in his career in 2018 (8.5%, second-lowest). 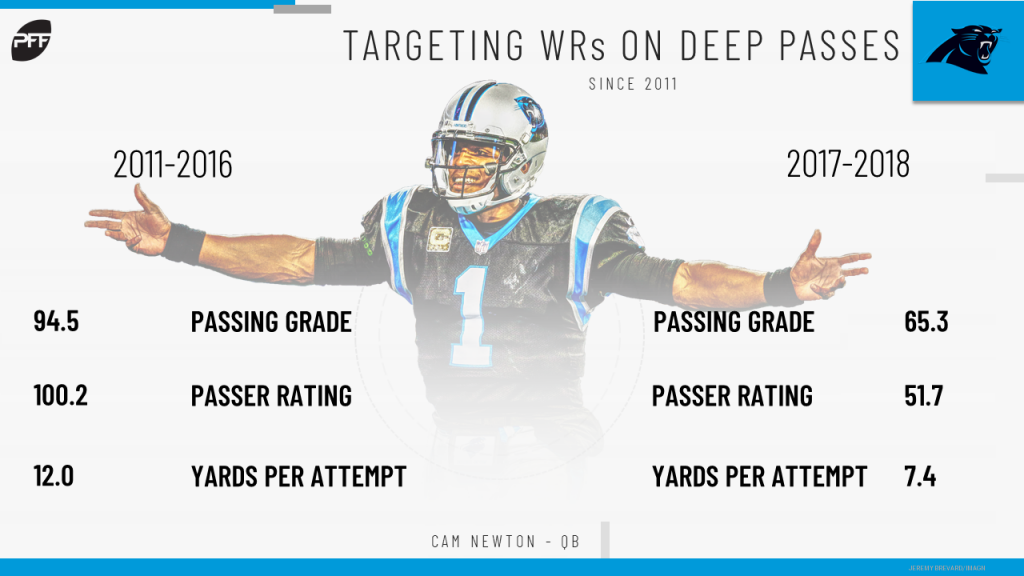 With Newton’s recent struggles deep downfield, Newton's favorite target quickly became running back Christian McCaffrey. The past two years saw Newton target the running back position like never before in his career: his 237 attempts targeting running backs since 2017 is nearly more than he did in his first five seasons in the league (242); Newton’s 14 passing touchdowns to running backs in the past two seasons is the second-most among quarterbacks in that span, and nearly double the rest of his career combined (8).

A dynamic young back like McCaffrey can cause a quarterback to look at the position more often, but the Panthers also invested a first-round pick on an electric wide receiver just last year. It’ll be interesting to see if the change in philosophy is because the team has a true receiving threat in the backfield or because the shoulder injuries have taken their toll. Once thought to be invincible, this will be the third consecutive season that an injury to Newton’s shoulder is looming over the team, and the question in 2019 will be if Newton can return to the deep-passing quarterback fans saw the first five years of his career, or if Newton to McCaffrey is going to be the go-to duo in Carolina for years to come.