There’s the shifty Saquon Barkley, the savior Baker Mayfield, the speedy Calvin Ridley and a slew of other impressive rookie talents vying for the Offensive Rookie of the Year title in 2018. When all is said and done, a skill position player will likely come out on top. But as for a darkhorse, San Francisco 49ers Mike McGlinchey has been sturdy on the offensive line in his rookie year — however, he’ll have to break a massive barrier to come out on top in the race, as no offensive lineman has ever won the award.

McGlinchey is no stranger to beating the odds, however. He went from a 60.6 grade in 2014 on minimal snaps to becoming the highest-graded FBS offensive lineman in 2017 at 92.5. And in 2016, he was flagged 11 times — tied for ninth-most among FBS offensive linemen. He reduced that to only three in 2017.

Now, as a top-10 draft pick and a stalwart on the 49ers’ offensive line, McGlinchey is showing out, particularly as a run-blocker. His 88.6 run-block grade is the best among NFL offensive linemen through Week 8, and while he has admittedly struggled in pass blocking, he has shown the potential to develop into an all-around player in the coming years. 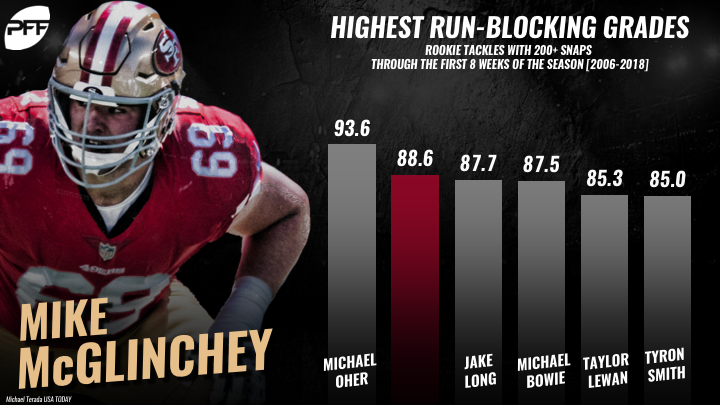 When rushing to the right or left of McGlinchey, running back Matt Breida has fared well. He’s accumulated 134 yards on just 16 rush attempts — and both of his rushing touchdowns on the year have come on either side of the 315-pound rookie.

Nevertheless, McGlinchey deserves to be in the conversation at the very least. Last year’s top run-blocking offensive lineman, Philadelphia Eagles center Jason Kelce, also excelled with a 95.3 run-block grade despite a 72.9 pass- block grade — and we all know how the Eagles’ season ended. McGlinchey’s success won’t lead to a Super Bowl this year, but his continued progress is a step in the right direction for the 1-7 49ers and his OROY aspirations.