The 32 Observations series continues with Nathan Jahnke, PFF's Director of Analytics, finding an interesting piece of information about all 32 teams after nine weeks of football. If you would like to make some observations of your own, you can do so with PFF Elite, where you can find several signature statistics for every offensive and defensive position in football, thanks to Premium Stats 2.0.

Buffalo Bills: The Bills defense has a combined 66 tackles for loss or no gain, which is the most among defenses this year.

Miami Dolphins: Over the last four weeks of the season, Cameron Wake has produced pressure on 25.9% of his pass rushes, which is the best rate for all edge defenders.

New England Patriots: The Patriots have had Rob Gronkowski stay in to pass-block 282 times since the start of 2014, and he’s allowed pressure on just 3.2% of those pass-blocks. That is the lowest rate among the 141 tight ends with at least 150 pass-blocks in that span.

New York Jets: Leonard Williams has three sacks and three hits on third downs. The only other interior defender with at least three of each on third downs this season is Aaron Donald.

Baltimore Ravens: The Ravens defense has tallied 17 batted passes, which is five more than any other defense this season.

Cincinnati Bengals: Jessie Bates is allowing 0.16 yards per coverage snap, which is the second-lowest mark among safeties this season.

Cleveland Browns: Since being drafted in 2015, Duke Johnson Jr. has forced 78 missed tackles as a receiver. That is the most for any running back in that time. 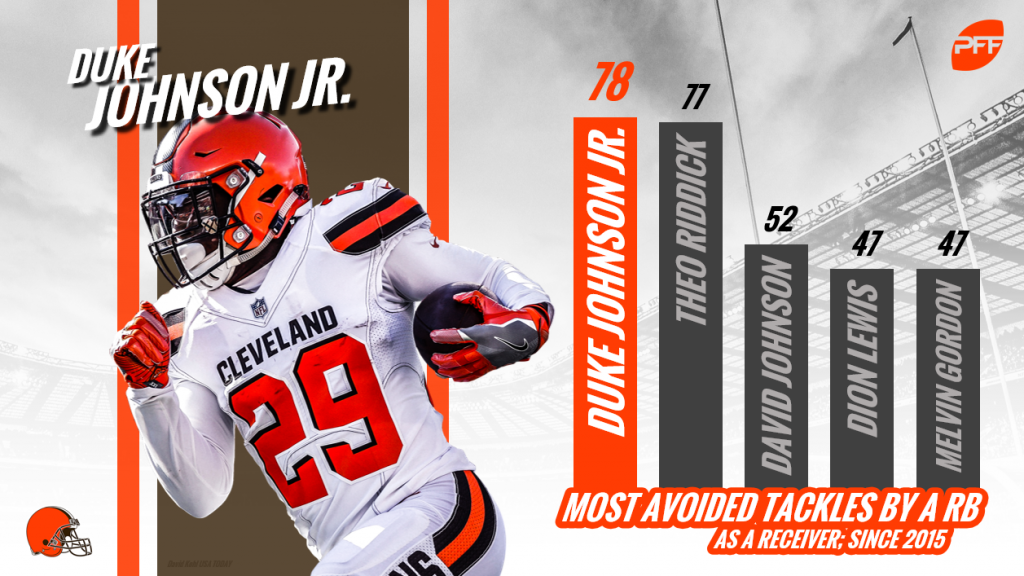 Pittsburgh Steelers: Three offensive linemen are currently on a streak of 90 or more pass-blocks without allowing a pressure. Two of them are Ramon Foster with 93 and Maurkice Pouncey at 98.

Houston Texans: Kareem Jackson is the only cornerback this season with multiple interceptions (2) and multiple pass breakups (3) with no touchdowns allowed.

Indianapolis Coltspressures: Jabaal Sheard has had three pressures or more in every game this season. He is now at 11 games straight with three or more pressures, which is tied for the longest active streak in the NFL.

Jacksonville Jaguars: Yannick Ngakoue has had four pressures or more in five straight games, which is tied for the longest active streak for all defensive players.

Tennessee Titans: Jayon Brown has six combined sacks and hits on the season including a sack in four of his last five games. Those sacks and hits are combined for the most for an off the ball linebacker.

Denver Broncos: Von Miller has had at least one pressure in 77 consecutive games, which is the longest active streak for all defensive players. His last game without a pressure was in 2013. 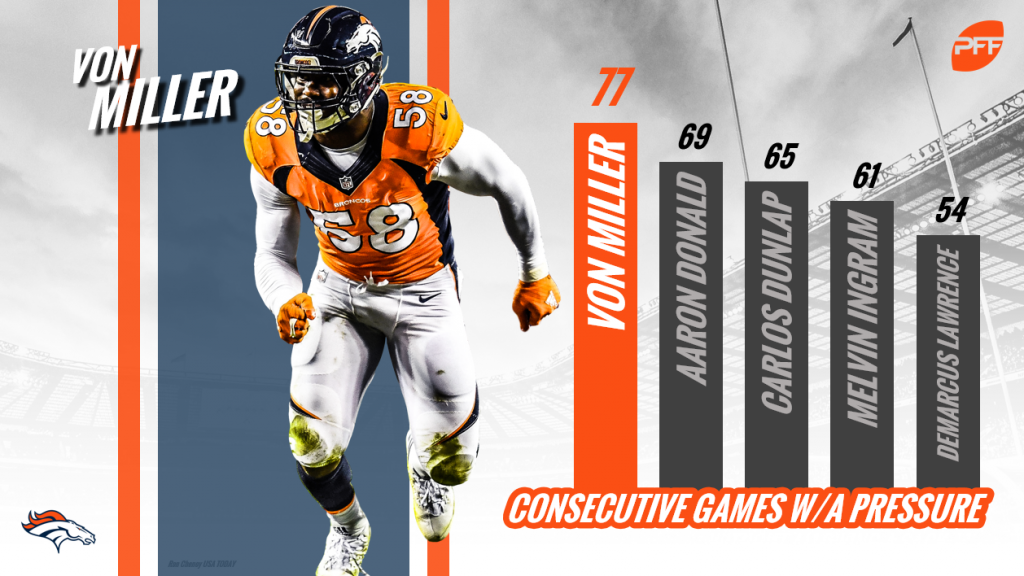 Kansas City Chiefs: Over the last two seasons combined, cornerback Kendall Fuller has made 23 stops after allowing a catch. That is tied for the most in that time.

Los Angeles Chargers: Melvin Gordon III has 55 runs of 10 or more yards since the start of the 2017 season, which is second-most for all running backs.

Oakland Raiders: Jalen Richard has gone 65 straight catches without a drop. That is the longest active streak for running backs and tied for the second-most among all players.

Dallas Cowboys: Leighton Vander Esch has an 11.5% run stop percentage, which is fourth-best for all linebackers.

New York Giants: The Giants receivers have avoided a combined 54 tackles this season, which is 10 more than any other team.

Philadelphia Eagles: Brandon Brooks has gone 1,617 consecutive pass blocks without allowing a sack. He allowed one in his first game as an Eagle in 2016 and hasn’t allowed one since then. That is the longest active streak for offensive linemen. 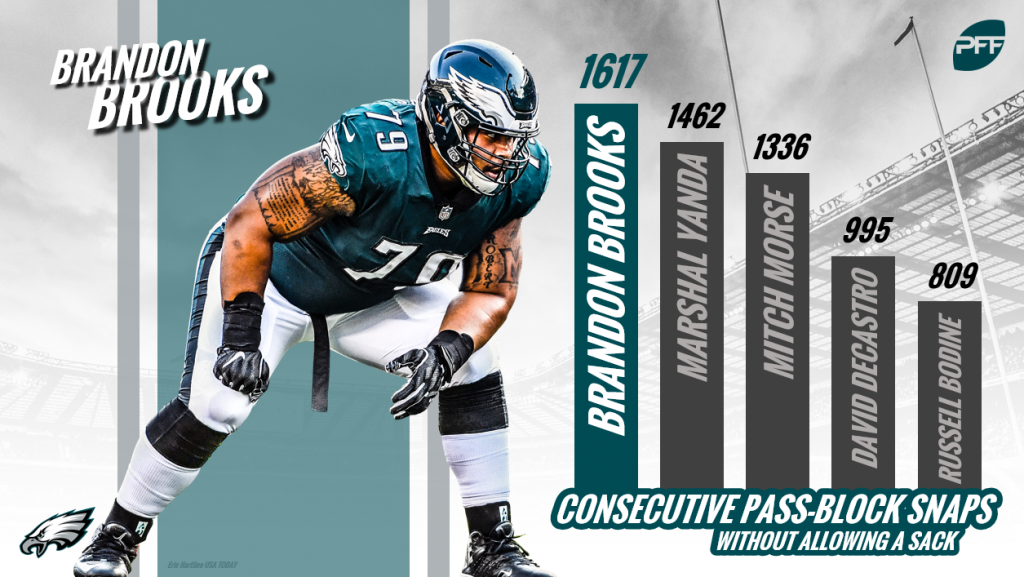 Washington Redskins: Ryan Kerrigan has made 34 consecutive tackles without a missed tackle. That is ten more than any other edge defender.

Chicago Bears: Akiem Hicks has a run stop percentage of 13.6%, which is the second-best for all interior defenders this season.

Detroit Lions: Over the last four weeks, Da’Shawn Hand has gotten pressure on 23.1% of his pass rushes, which is the best rate for interior defenders. A’Shawn Robinson is tied with Aaron Donald for the second best rate at 22.9%.

Green Bay Packers: Over the last four weeks, Jaire Alexander has five pass breakups, which is tied for the most for all cornerbacks.

Minnesota Vikings: The Vikings defense has missed 14 tackles against the run, which is tied for the fewest this season for any team.

Atlanta Falcons: The Falcons have 31 pass breakups, which are the most for any defense this season.

Carolina Panthers: Wide receiver D.J. Moore is averaging 8.6 yards after the catch per reception, which is the third-best rate for wide receivers.

New Orleans Saints: Josh Hill is averaging 10.9 yards after the catch per reception, which is the second-best rate among tight ends.

Tampa Bay Buccaneers: Rookie cornerback Carlton Davis has been thrown at eight times on third downs this season. Four of them have fallen incomplete, and the three of the four that were completed, he was able to tackle the receiver short of a first down. An 87.5% success rate on his third down targets is the best rate for cornerbacks over these last two seasons.

Arizona Cardinals: Only four defensive players have five or more run stops in the red zone this season. The list includes two Cardinal players; Josh Bynes and Budda Baker, who have five each.

Los Angeles Rams: Cooper Kupp is averaging 3.65 yards per route run on third downs, which is the highest rate for wide receivers this season. 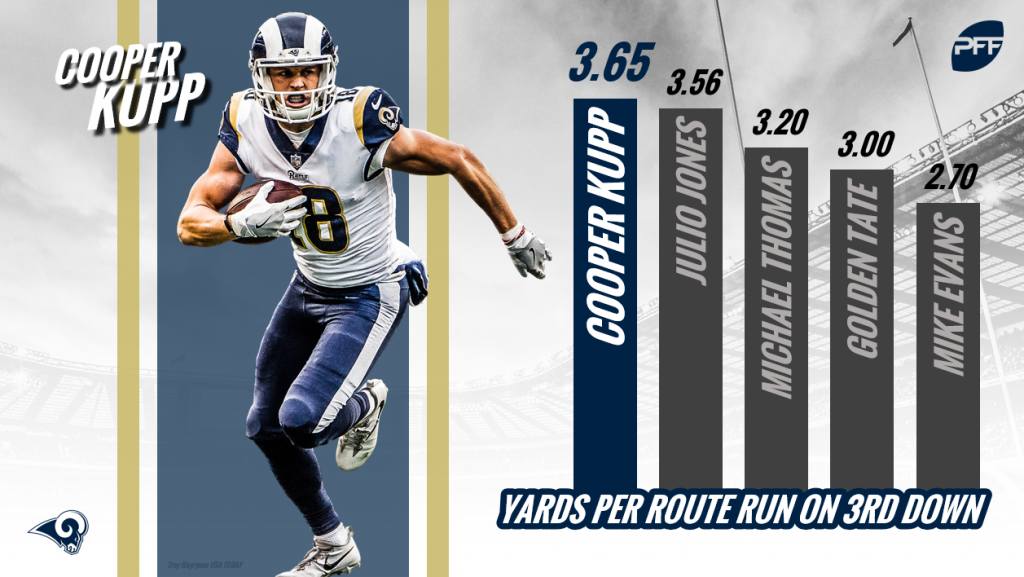 San Francisco 49ers: K’Waun Williams has allowed fewer than 30 yards in each of his last seven games. That is the longest streak for cornerbacks with at least 15 coverage snaps in each game.