Below is the 11th installment of our weekly PFFELO rankings. Like all ELO systems, PFFELO is an iterative system that updates each team’s rating after each game based on two things: how well they played against their opponent and how well they were expected to play against their opponent. The PFFELO rating system measures the former using our unique offensive, defensive and special teams grades, while the latter is determined by the PFFELO ratings leading up to the game and where the game is played.

The Patriots found another way to win Sunday night against the Broncos, utilizing special teams and the continued strong play of their offense (grading out as the league’s best). Their weaknesses defensively will likely always be a tension to manage, but they’ve found a way to control games with Tom Brady (the highest-graded quarterback in the league) throwing passes to Rob Gronkowski (the second-most efficient tight end in the league) and handing the ball off to a collection of running backs in Dion Lewis, James White and Rex Burkhead that are all averaging more than four yards per carry through the season’s first nine games. Throw in the play of Brandin Cooks, who leads all receivers in yards gained on deep passes, and the Patriots shouldn’t have a problem outscoring teams moving forward.

The Eagles went into their bye as one of the league’s hottest teams, winning seven in the row. They’ve done so with a balanced attack offensively and a top-10 defense in our grading system. It will be interesting to see how they utilize their offensive talents moving forward, as Zach Ertz (78.5), Alshon Jeffery (70.7) and LeGarrette Blount (73.2) all add something unique to Carson Wentz (85.0) and the Eagles’ attack. Throw in the explosiveness of trade acquisition Jay Ajayi (83.0) and an expected improvement of Wentz under pressure (35.2 percent completion, 30th in the league), and the Eagles have the potential to have the league’s most potent offense down the stretch.

I think the AFC is going to wish that teams like the Browns, Lions and Colts could have closed the deal against the Steelers in games where the Pittsburgh didn’t play particularly well (but still won). Now the Steelers sit at 7-2, without much of a challenge in their division, and with an upcoming schedule consisting of only two teams (Tennessee and New England) with any sort of championship hopes (and Pittsburgh gets both of those at home). The Steelers’ defense hasn’t graded as well (12th) as their results would indicate (fourth in yards per play allowed), and losing Joe Haden (80.8) hurts them. But if their offense can ever reach their potential, we might be talking about Big Ben ending his career with his third ring in four tries.

The Chiefs are currently fourth in our rankings, exactly the spot where we had them Week 1. Like the Steelers, the Chiefs haven’t played as well as expected in recent weeks. Also like the Steelers, the Chiefs have a pretty comfortable schedule moving forward. If they can match their offense’s explosiveness from the first five weeks (where Kareem Hunt averaged 6.3 yards per carry and broke 28 tackles) and improve even slightly defensively, Kansas City should easily secure back-to-back AFC West division titles for the first time in team history. If Alex Smith (fifth among quarterbacks in PFF grades) can continue his outlier play through the playoffs, then the Chiefs are a real contender in the AFC.

No team has risen through this ranking system much like the Saints have. In what has been the most-compelling storyline to date, the Saints have a top-five defense to go along with one of the league’s best rushing attacks. With those in place, quarterback Drew Brees (our second-highest graded quarterback) has less on his plate, and is working within more advantageous terrain (he’s facing the least amount of pressure in the league). When kept clean, Brees’ passer rating of 116.4 and adjusted completion percentage of 82.8 are second among active quarterbacks. After a couple of weeks of the public (and professionals) fading the Saints, it’s a good question as to when what has come up must come down.

The Panthers being 7-3 through 10 games has been one of the victories of the inaugural year of the PFFELO system. In eclipsing their win total from a season ago, the Panthers are in a prime position to compete for a division they won from 2013-2015. It appears the trade of Kelvin Benjamin has helped the offense, with Devin Funchess (75.7) the main beneficiary. Funchess has caught 10-of-12 targets since the trade, for 178 yards and two touchdowns, while forcing two missed tackles and generating 91 yards after the catch. With 294 yards rushing (154 of which were after contact) Monday night to boot, it will be interesting to see if Carolina’s offense can continue their strong play to go along with a defense that has been very stout in recent weeks.

While the Rams have made beating up on weaker teams a weekly part of the NFL experience, their game against the Vikings provides a fantastic test for LA’s best team. Soft schedule aside, everything has been encouraging for the Rams. Todd Gurley is fourth in the league in rushing and fifth in the league in yards gained after contact on the ground, while he’s third in the league in yards receiving among running backs. This has helped put Jared Goff in advantageous positions, and he’s answered the bell with the second-best quarterback rating when using play action (131.3) and the league's best passer rating on 3-step concepts. Add in Robert Woods (78.6), Cooper Kupp (77.6), Sammy Watkins (76.9) and a sturdy offensive line, and the Rams are a shining example of how far a team can come in a short time on one side of the ball.

Finally. The Falcons finally put a game together Sunday and beat the Zeke-less Cowboys at home. Matt Ryan (86.1) threw another interception that wasn’t his fault (he’s made only two turnover-worthy throws all season), and Devonta Freeman (90.2) had to leave the game early with an injury, but overall signs were encouraging for this team as they try to put a 4-4 start behind them. Their defense has been low-key good throughout the whole season, holding teams to just 5.0 yards per play (ninth) and earning fifth position in our PFF defensive rankings. The bad news is that their schedule doesn’t get much easier, as they have four games against teams in the top 10 on this list left, and another game against a solid Minnesota Vikings team. If they can make the playoffs through that gauntlet, look out for Atlanta come January.

After struggling the past few weeks on the field, the Seahawks were dealt a huge blow Thursday with the loss of Richard Sherman (Achilles). Sherman was allowing a pedestrian 75.5 passer rating and less than a 50.0 percent completion percentage on throws into his coverage, and his loss will cascade through the defense, especially if Earl Thomas (hamstring) is slowed in the coming weeks. In what has become something of an interdivisional rivalry, the Seahawks will try to avenge their playoff loss to Atlanta at home Monday night. The Falcons defensive front gave Dallas fits last week, so it will be important for Duane Brown (80.2) to be healthy, as the rest of the Seahawks offensive line boasts PFF grades of 38.7, 69.4, 38.7 and 48.1.

While one missing Cowboy got all the headlines, Tyron Smith showed unequivocally his value to their offense Sunday. With him out, Chaz Green surrendered four sacks, one hit and two hurries, while Adrian Clayborn generated six sacks himself in a 27-7 Falcons win. Losing Sean Lee was almost as bad for the Cowboys defense as losing Smith was for the offense, as the Falcons generated 132 yards on the ground without their top running back, and Austin Hooper caught all six of his targets and scored a touchdown. With the Eagles next on the schedule and the margins thin in the NFL, I’d be surprised if Dallas was in the top ten of this list come next week. 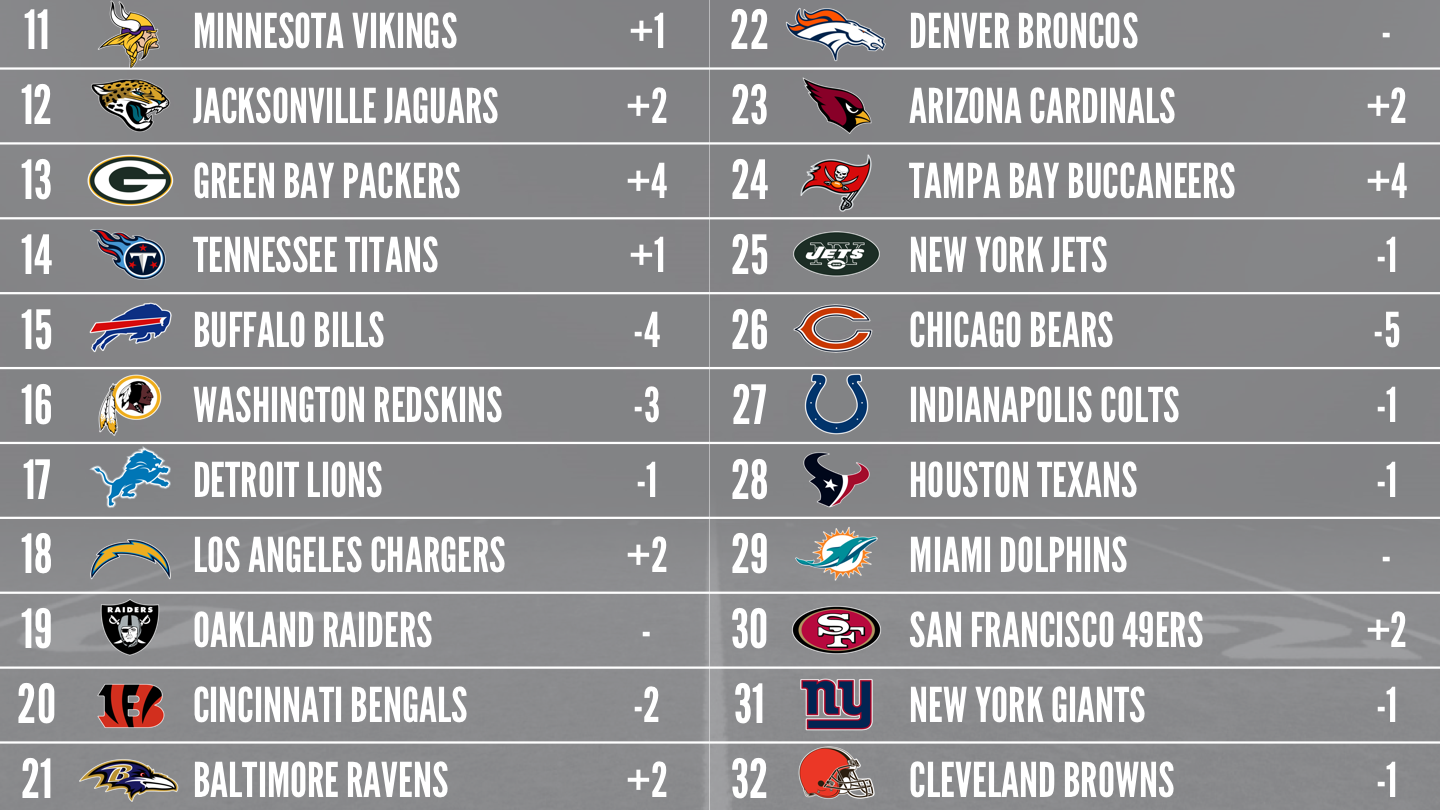