Week 3 is in the books and it gave us our first big upset of the season as BYU went into Madison and beat our previously-ranked No. 2 Wisconsin Badgers. As we get ready to embark on another weekend of action, it’s best to give one final look at last week and prepare for this coming weekend’s slate of game by outlining an interesting observation pulled from PFF’s wealth of college data.

In our Top 25 Observations series, we are providing data from our grading of every player on every play of every game at the FBS level and this week bring you, our readers, the observations on every team’s top edge defender in our Top 25.

Isaiah Buggs has recorded 10 total quarterback pressures (two sacks) and a pass-rush productivity of 8.7 through three games. Buggs is looking to lead the Crimson Tide in QB pressures for the second straight year after recording 43 total pressures in 2017.

In this week’s Georgia feature, we highlighted the lack of pass-rush generated by the Bulldogs. D'Andre Walker and his four total QB pressures, along with senior Jonathan Ledbetter (73.6 overall grade) are the only two Bulldogs with more than a single pressure and account for almost 50 percent of the pressures generated. After being used primarily as a rusher on defined passing situations a season ago, and generating a QB pressure every 4.2 snaps, Walker has seen much greater attention early this season.  Combining that extra attention along with the speed with which QBs have gotten rid of the ball and one can see why Walker numbers have dipped.

Bosa, Ohio State and domination. Those three are ingrained together in college football over the past half-decade. Younger brother Nick was our returning highest-graded edge defender and is again holding the top spot among edge defenders as well as our draft big board. While Bosa leads the Buckeyes in sacks (4) along with Dre’Mont Jones (94.4), he is not leading the team in total QB pressures. That honor belongs to sophomore Chase Young, as he is seventh nationally in pass-rush productivity (13.7) with his 15 total QB pressures and obviously benefitting from the attention paid to his elite teammates. As the season moves along, this group looks to hang on to the ‘best defensive line in college football’ title albeit they'll have to do it without Bosa for at least the next 6-7 weeks. 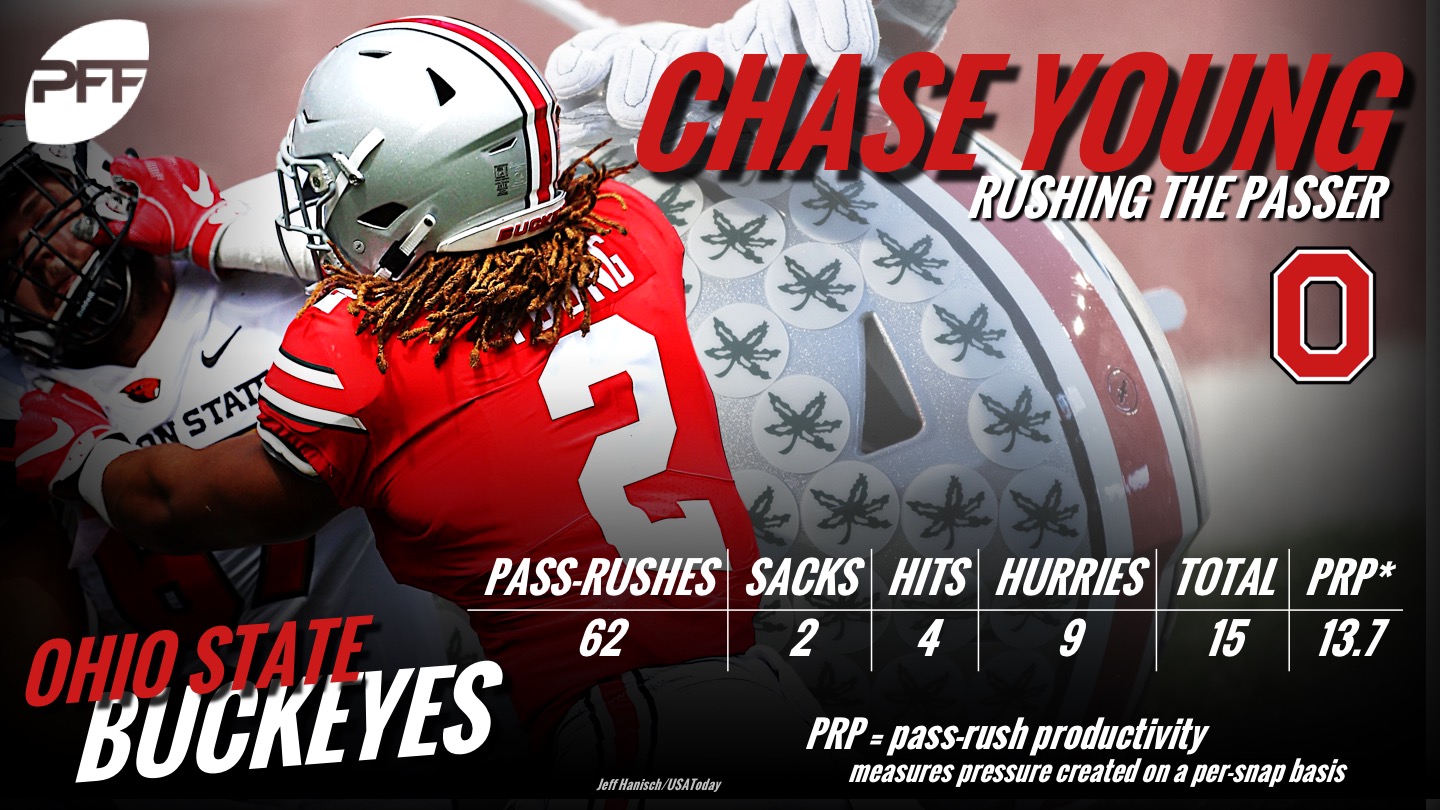 Shareef Miller is picking right where he left off a season ago (51 total QB pressures and 83.8 grade), as his 12 total QB pressures are nine more than the next closest teammate. Miller is not hard to fixate on, either, as he has exclusively lined up and rushed from the left side of the defense (all 65 pass-rush snaps).

Not shockingly, Clemson and Ohio State are Nos. 1 and 2 in pass-rush win percentage, respectively, and for the Tigers, this is in large part due to the redshirt junior Clelin Ferrell along with defensive interior standout Dexter Lawrence (86.1). Leading the nation with five sacks, Ferrell is currently fifth in our pass-rush productivity measure (15.7) rushing almost exclusively from the right side (92 percent). 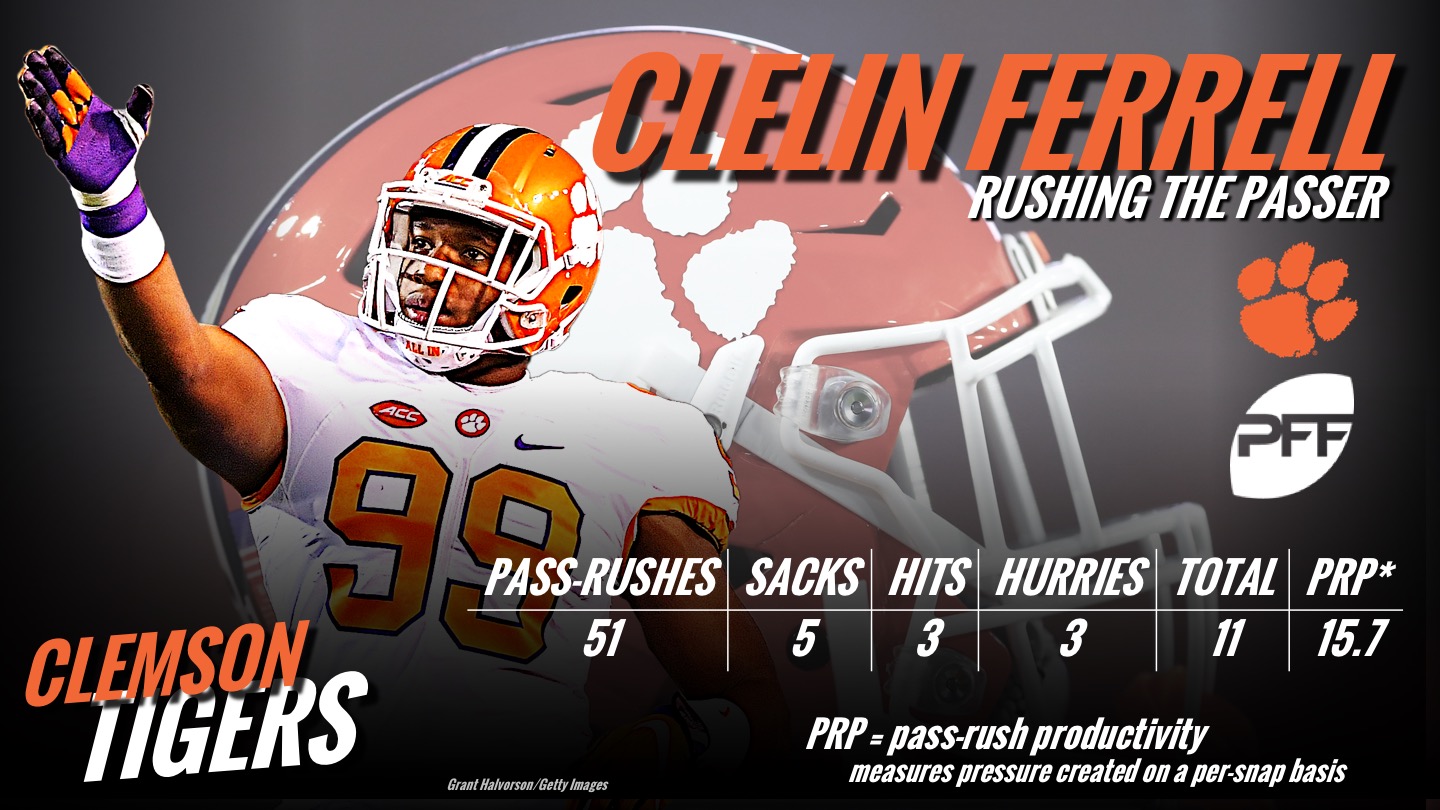 Michael Divinity Jr. leads the Tigers in total QB pressures with six, primarily rushing from the left side (64.5 percent). This is despite missing the second game against Southeastern Louisiana.

Zach Baun will have to step up even more in the coming weeks, as fellow edge defender, senior Andrew Van Ginkel, left the BYU game with a leg injury. Baun has been strong against the run, as his 82.2 run-defense grade is tied for 16th among edge defenders.

Juniors Khalid Kareem and Julian Okwara give the Fighting Irish a difficult tandem to handle on the outside. Both have 13 total QB pressures each and are tied for 15th among qualified edge defenders, in addition to a combined 10 stops. They move both around as well, with the two players nearing a 50-50 split in rushing from the right and left.

The Cowboys are coming off a victory over Boise State in which they pressured Brett Rypien on 30 of his 63 dropbacks and accumulated 41 total QB pressures as a team, led by Jordan Brailford in the best game of his career. His two sacks and five total pressures were the most in any of his career games as well as a career-best overall game grade. His current grade of 84.9 overall puts him at 10th edge defenders.

Rushing from the left side 86 percent of the time, Joey Alfieri has 10 total QB pressures, including four sacks. Alfieri has also been solid against the run, posting an 80.5 run-defense grade.

For Montez Sweat, as we saw above with Ohio State, it’s beneficial to be a teammate of one of the five best defensive players in college football in Jeffrey Simmons. Sweat is taking advantage of the opportunities provided by all the attention Simmons commands on the interior.  Sweat has 12 total QB pressures and his pass-rush productivity (12.0) is 22nd among edge defenders. 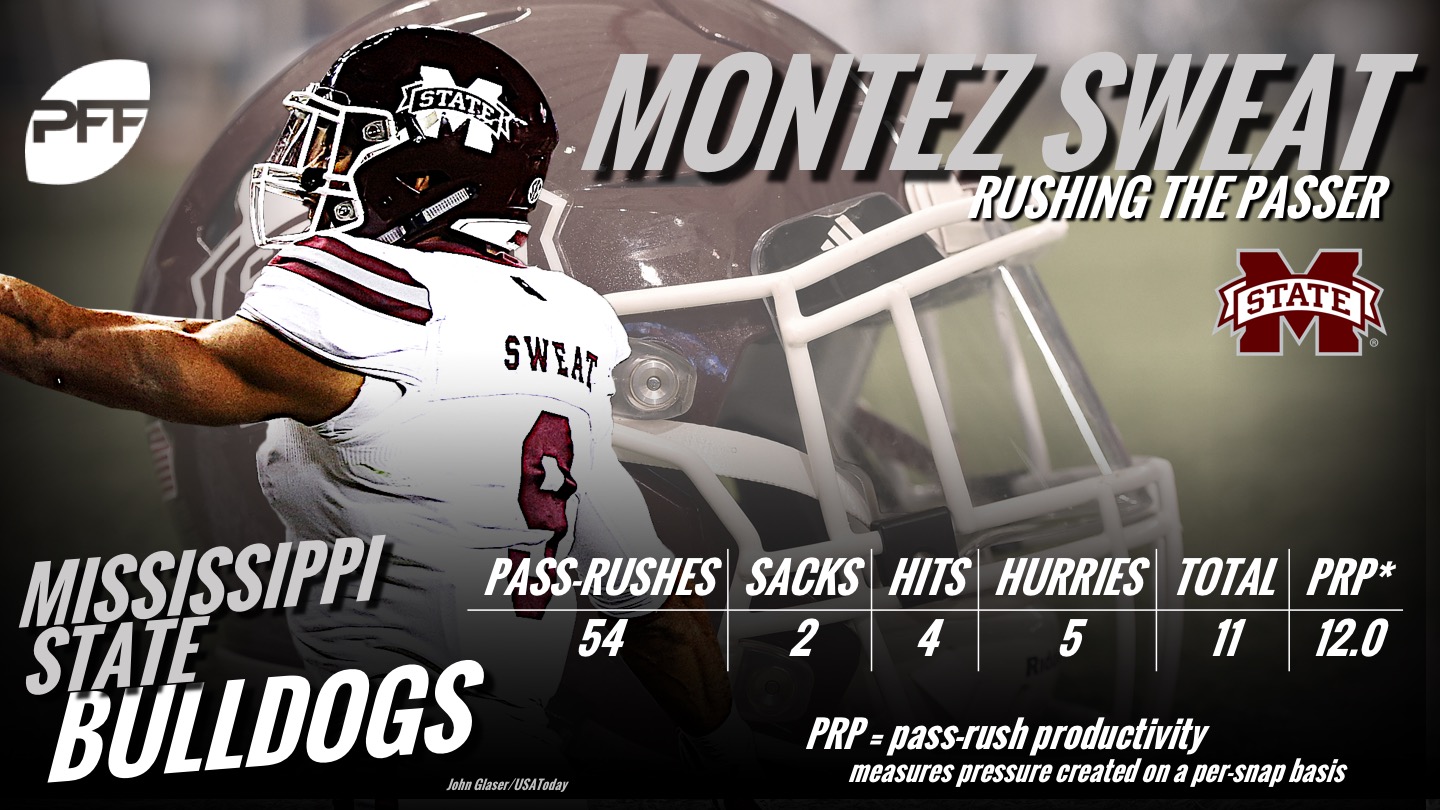 In their two games, UCF has not been able to truly get their pass-rush going and had minimal opportunities to do so. Titus Davis leads their edge defenders with three total QB pressures to go along with three stops.

The Hawkeyes’ second-leading returning pressure player has come out fast this season, as A.J. Epenesa is tied for the lead nationally with five sacks and has 12 total QB pressures. His pass-rush productivity (13.5) is tied for ninth in the country, as he’s exclusively gotten those pressures rushing from the right side.

To go along with seven total QB pressures, Kirk Livingstone has been stout against the run (82.4). His 13 stops are tied for second in the FBS among edge defenders. The Bulls have moved him around as well as 46 percent of his rushes have come from the left and 54 from the right side.

Chase Winovich and fellow edge defender Rashan Gary give the Wolverines a nasty combination of players able to get after the quarterback. Winovich has 16 total QB pressures, good to tie for fourth nationally, as well as a team-leading 12 stops. 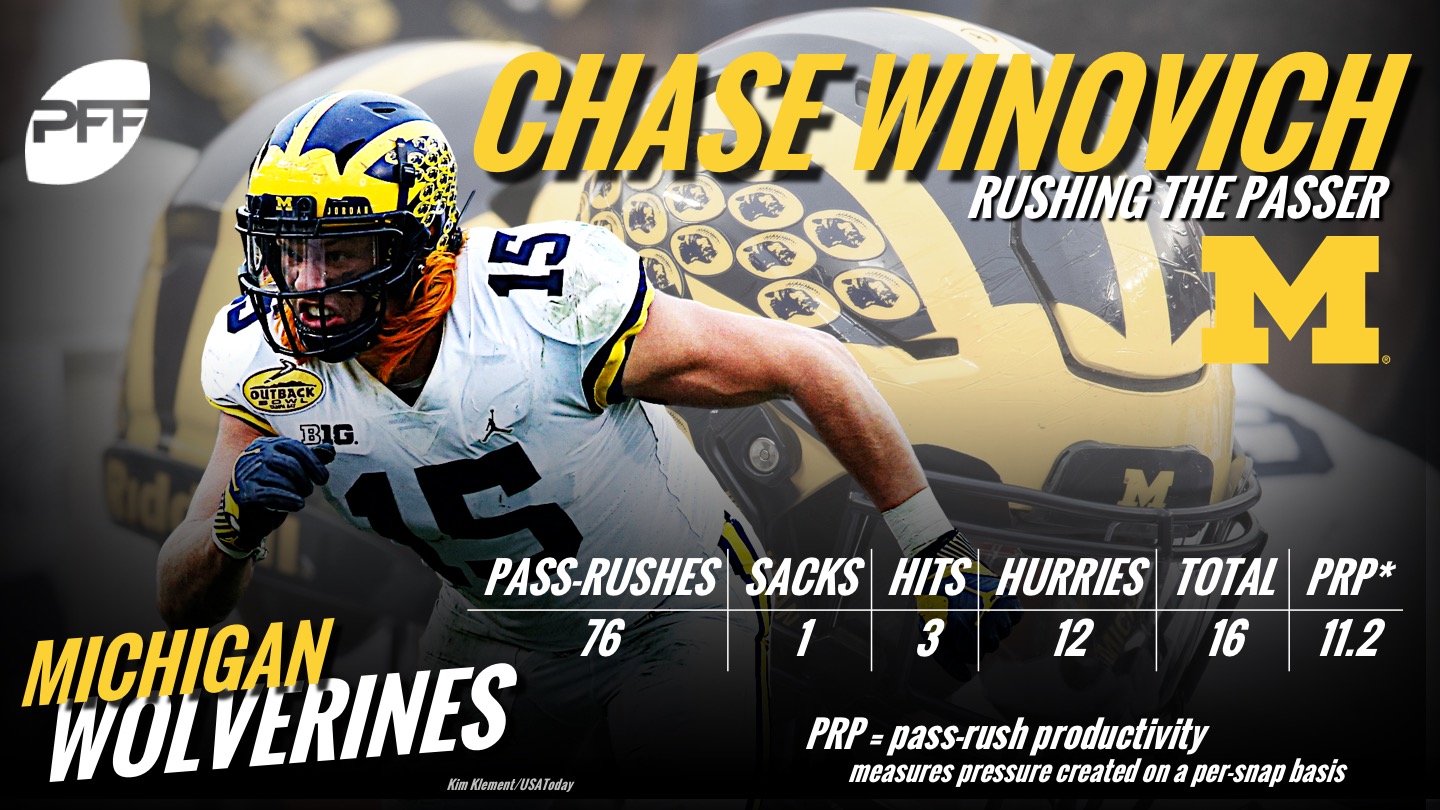 While defensive tackle Gerald Willis III (84.4) has been disruptive on the interior, Joe Jackson has provided the most consistent pass-rush on the edge. After collecting 77 total QB pressures along with 17 sacks in his first two seasons, Jackson has not yet matched that previous pace, with just seven total QB pressures and one sack through three games.

Senior Ben Banogu has provided a consistent pass-rush in the two years he’s been at TCU since sitting out a year as a transfer. He has 12 total QB pressures, rushing 93 percent of the time from the left side, but has yet to get his first sack of 2018.

Trevon Hill lived in Florida State’s backfield during the first game in Week 1. He has five total QB pressures, including the two sacks from the opening weekend. The Hokies are back in action this weekend after having last weekend’s game postponed.

Willie Taylor III is the highest-graded non-secondary player for the Cougars through three weeks and his 80.2 pass-rush grade leads the team. Even though Taylor primarily rushes from the right side (73.2 percent), four of his seven total QB pressures have come from the left side.

Jabril Frazier has registered eight total QB pressures on 41 pass-rush snaps, tying him18th among edge defenders in pass-rush productivity (12.2). His two-sack performance this past weekend was the third multiple sack game of his career.

Finally healthy and able to contribute, Deonte Holden is taking advantage of his playing time. He is second on the team with six total QB pressures, but on only 28 pass-rush snaps in two games.  This makes him tied for 15th nationally in pass-rush productivity (12.5). His 66.7 pass-rush grade is tops among Wolfpack defensive linemen.

Charles Omenihu is second on the team with seven total QB pressures and is the only Longhorn defensive lineman to register a sack. He is excelling in run defense, with an 81.1 run-defense grade and eight stops.