The five best defensive players in college football through Week 3

With three-plus weeks into the season, we’re starting to get a better feel for player performances around the country. When it comes to the best defensive players in the country, there are two names from our preseason PFF College 50, but also a few breakout players who are ready for national recognition as the season heats up.

The list of top five defensive players through three weeks is brought to you by Eckrich, the Official Smoked Sausage of the College Football Playoff.

Through three weeks, Alabama and Ohio State are dominating the top of the charts when it comes to best defensive players.

After grading at an impressive 82.7 on only 151 snaps last season, Williams was a prime breakout candidate given his strong performance in a small sample. He’s been that and much more through three games, leading the nation with a 96.0 grade against the run and his 86.2 pass-rush grade ranks fifth among interior defensive linemen. Williams has the No. 3 run-stop percentage among interior players at 24.4, and he has three QB hits and five hurries on 64 rushes. 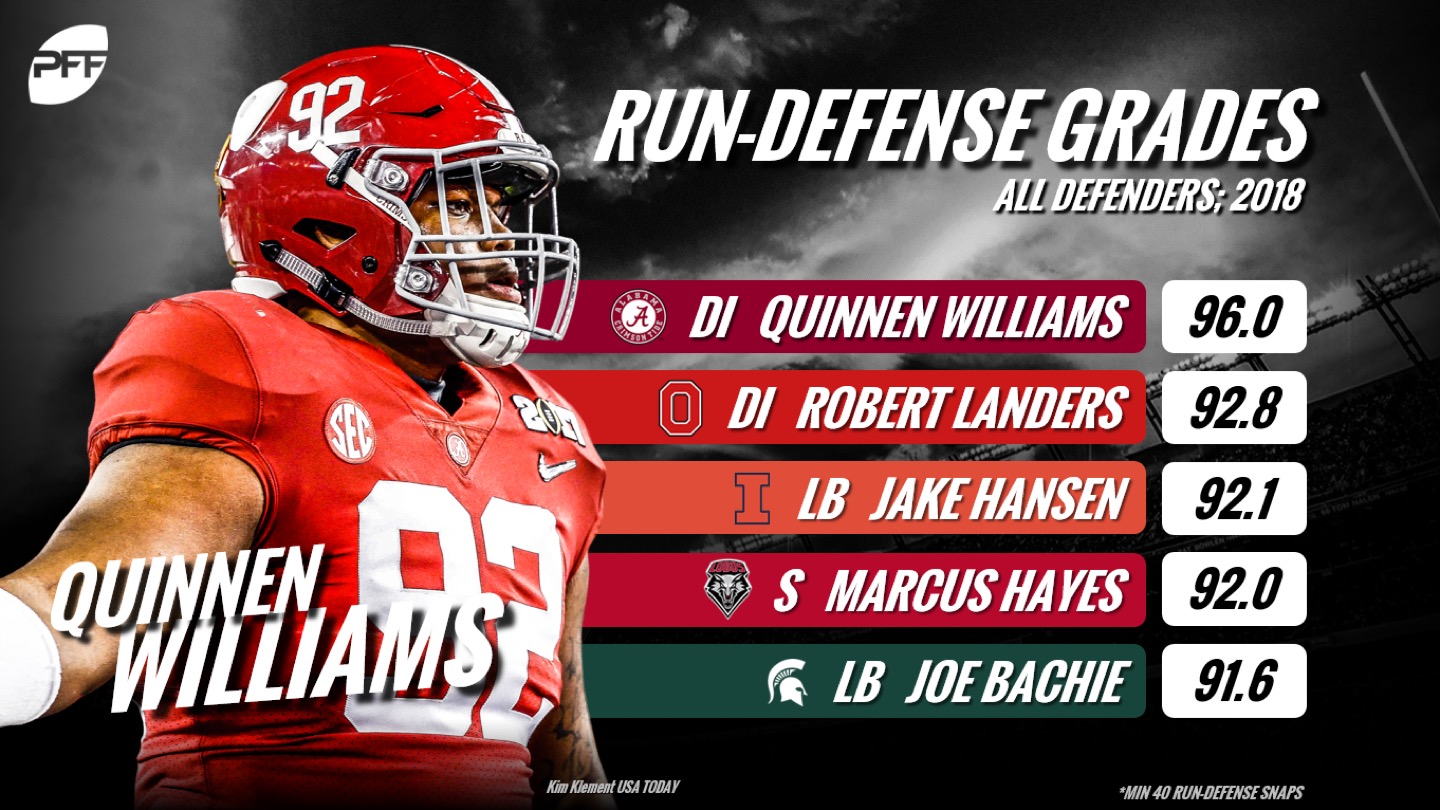 Thompson’s opening night game against Louisville was one of the best you’ll see from a safety. The junior made plays all over the field, picking off a pass from center field, breaking up a pass in the slot and picking up a sack as a blitzer. On the season, Thompson has the highest coverage grade among anyone in the country as he has two interception and three pass breakups to go with six total stops. 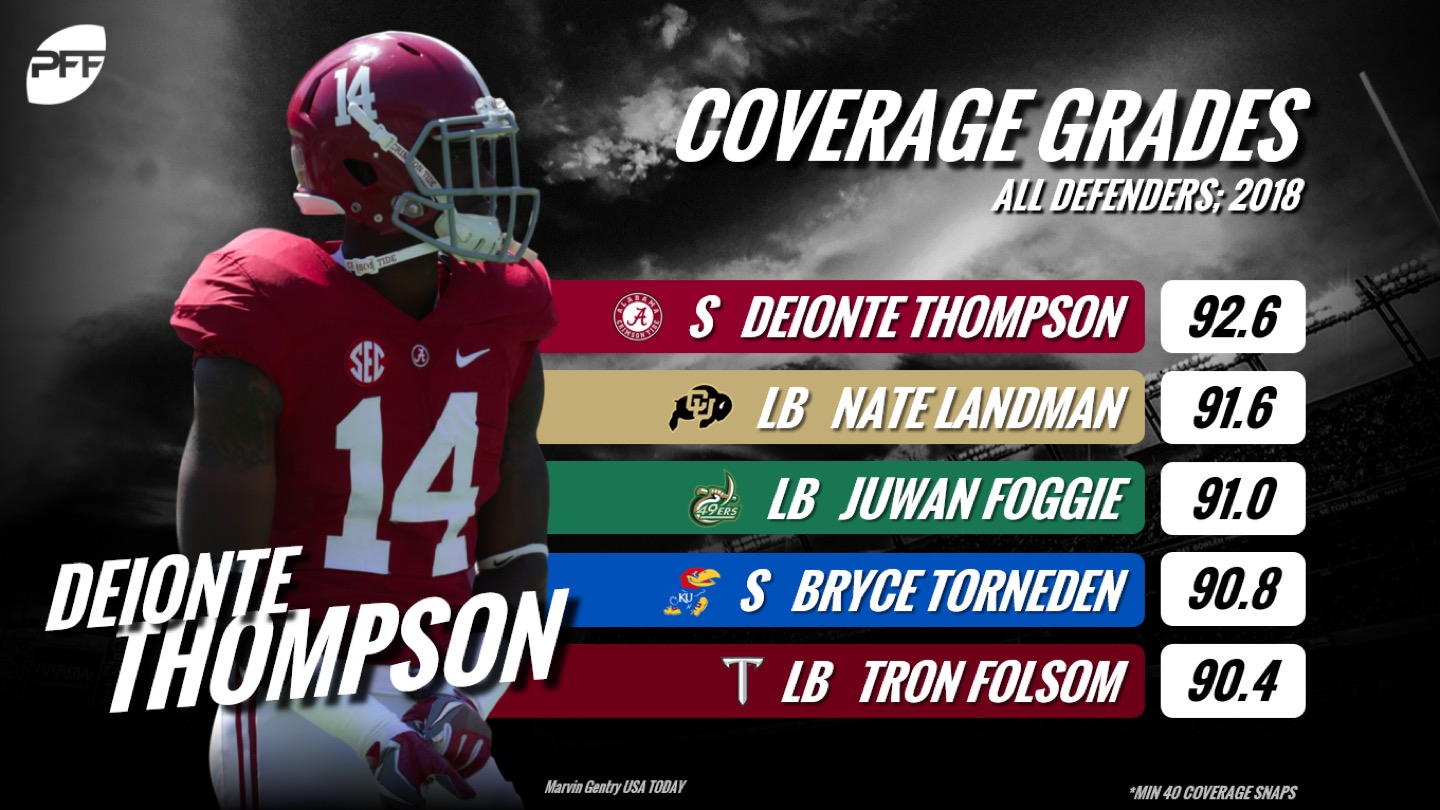 Tied for the top spot among interior pass-rushers, Jones is off to a hot start and he even showed off his running skills on a fumble recovery against TCU. On the season, he has eight pressures (four sacks, one QB hit, three hurries) on his 83 pass-rushes to go with three run stops and an interception. Jones has excellent early-season stats, but his grade has more to do with the disruption he’s created in all phases. 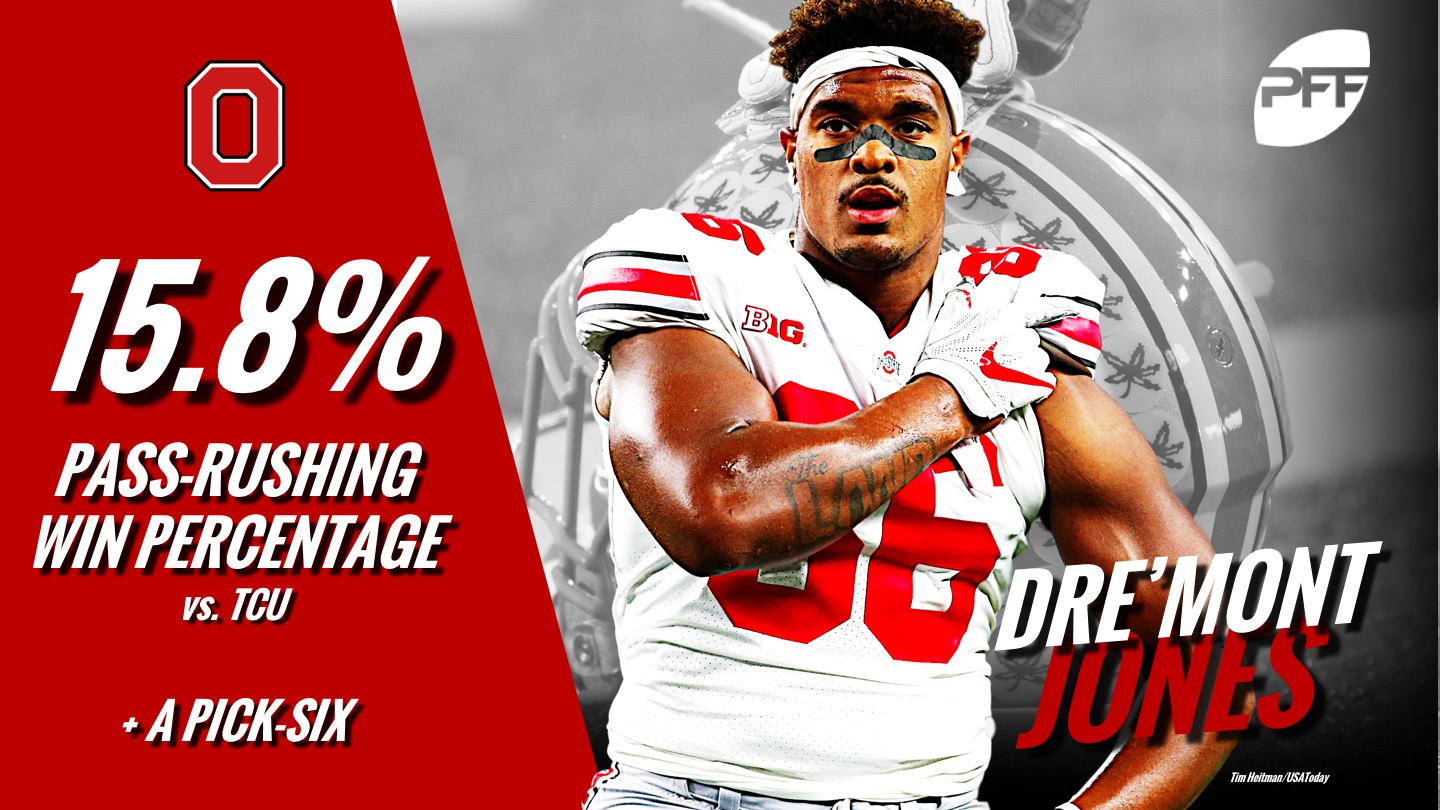 The No. 1 player in the PFF College 50 coming into the season, Bosa has lived up to the hype with the top grade among edge defenders and the No. 2 pass-rush grade at 91.0. He has four sacks, two QB hits and five hurries on only 69 rushes to go with nine other quick wins that didn’t make the stat sheet as pressures. It all adds up to a win percentage of 30.4, best among rushers with at least 60 attempts. Bosa has also played well against the run with an 85.2 grade that ranks ninth in the nation. 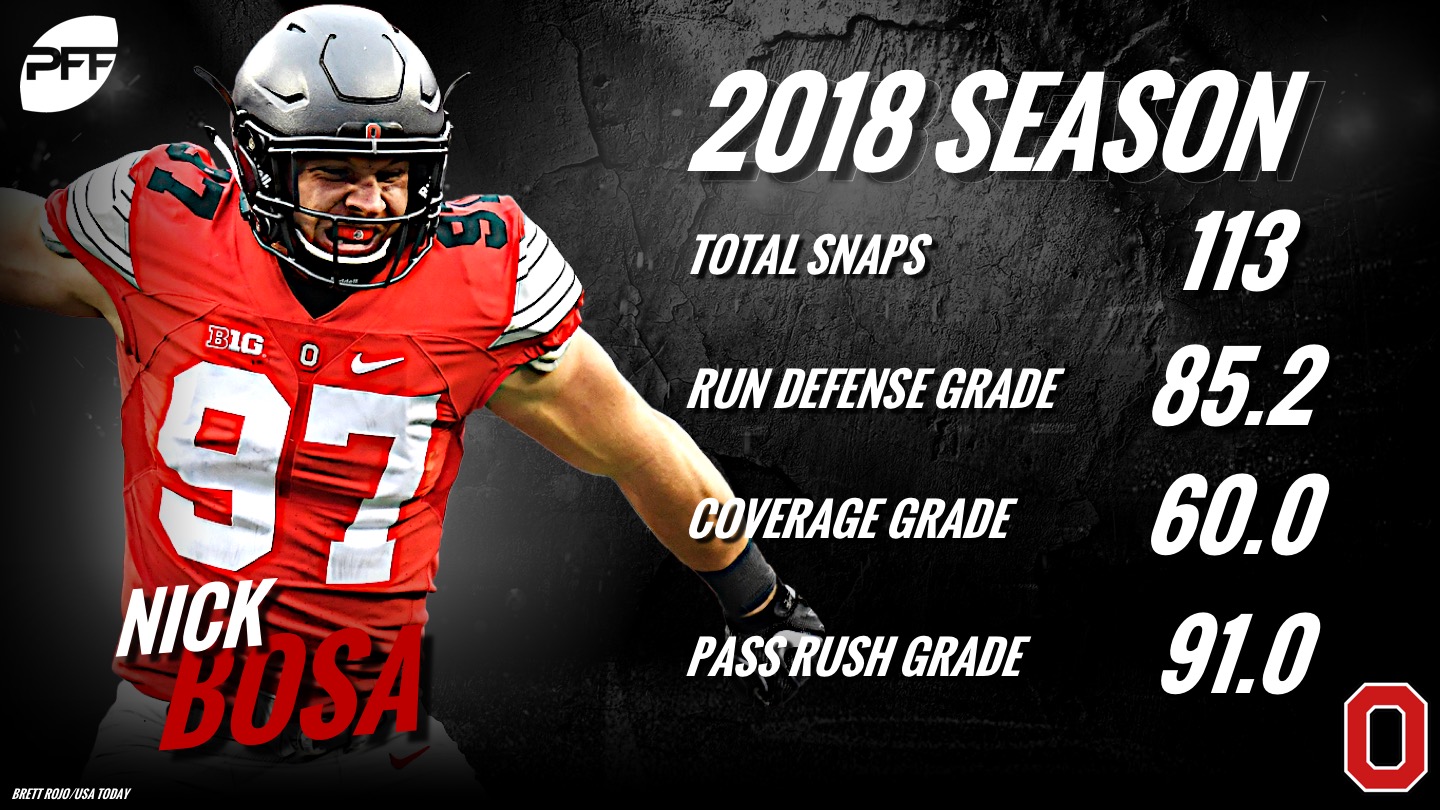 Our No. 1 interior defensive line prospect for the NFL draft, Simmons is off to a strong start in all phases. He ranks fourth in the nation against the run at 91.3 as he’s been unblockable at the point of attack and he’s finished plays with seven stops. As a pass-rusher, he has two QB hits and five hurries on 76 rushes but he also has seven other quick wins that didn’t get registered as pressures. Overall, Simmons has rarely been blocked through three games. 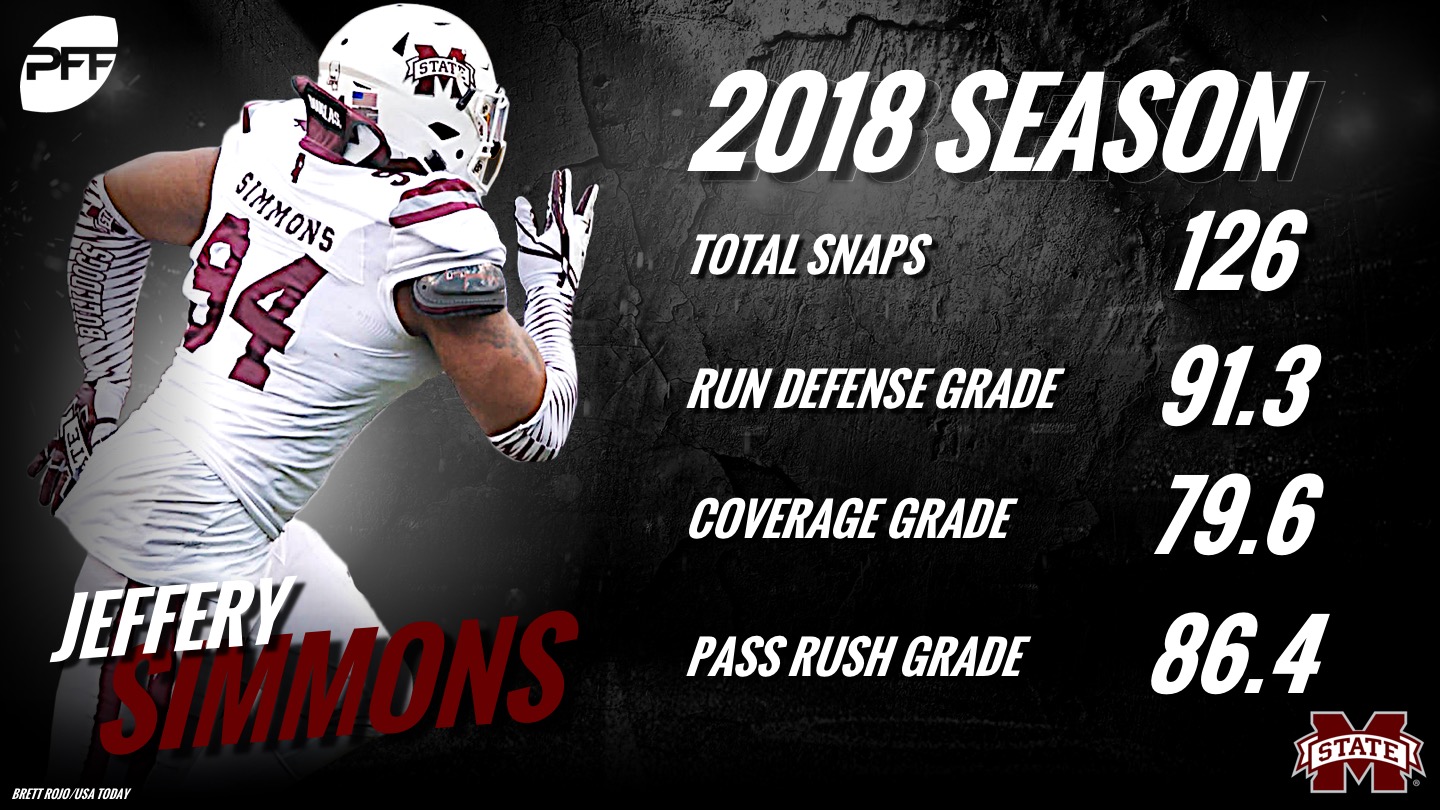