Why the Arizona Cardinals are struggling down the stretch yet again

1. Cardinals (3): Are they unequivocally the top team in the league? Hard to say, but it's not like anyone else has an airtight claim. What Arizona does have is the NFL's best record (8-1) and a proclivity for overcoming adversity, whether it's coach Kliff Kingsbury and others benched by COVID-19, or injuries sidelining QB Kyler Murray (ankle), WR DeAndre Hopkins (hamstring), RB Chase Edmonds (ankle), and DE J.J. Watt (shoulder), who might still return at some point. And OLB Chandler Jones, who dealt with the virus himself, also appears back on track, registering his first sack Sunday since notching five in Week 1 to become the franchise's all-time leader (67). Yep, let's call the Cards the best ... at least for now. Syndication Arizona Republic

The Arizona Cardinals are unraveling, and it’s happening at the worst possible time.

At one point in the season, the Cardinals were 8-1, on top of the NFC, and were considered by some as the most impressive team in the NFL. With Kyler Murray in his third year under Kliff Kingsbury, the Cardinals offense was playing at an elite level, and the defense was ranked top five in most defensive efficiency metrics.

However, the Cardinals are sitting at 10-4 and coming off two straight losses entering Week 16. Prior to Week 15, PFF gave the Cardinals a 99% chance to make the playoffs — even when factoring in the Deandre Hopkins‘ injury.

Nevertheless, a loss to the Detroit Lions raises some questions. What is wrong with Arizona's defense? Where has the offense gone wrong? Can the Cardinals really miss the playoffs?

The best starting point is the offense because, at the end of the day, this team will only go as far as Murray takes it. Before getting injured against the Green Bay Packers, Murray was the frontrunner for the NFL's MVP award. He sported an 89.5 PFF passing grade and led the league in big-time throw rate (9.0%).

Unfortunately, we have not seen this version of Murray since then, which has caused some problems for the Cardinals. The other big problem? It is eerily similar to how their 2020 season played out. 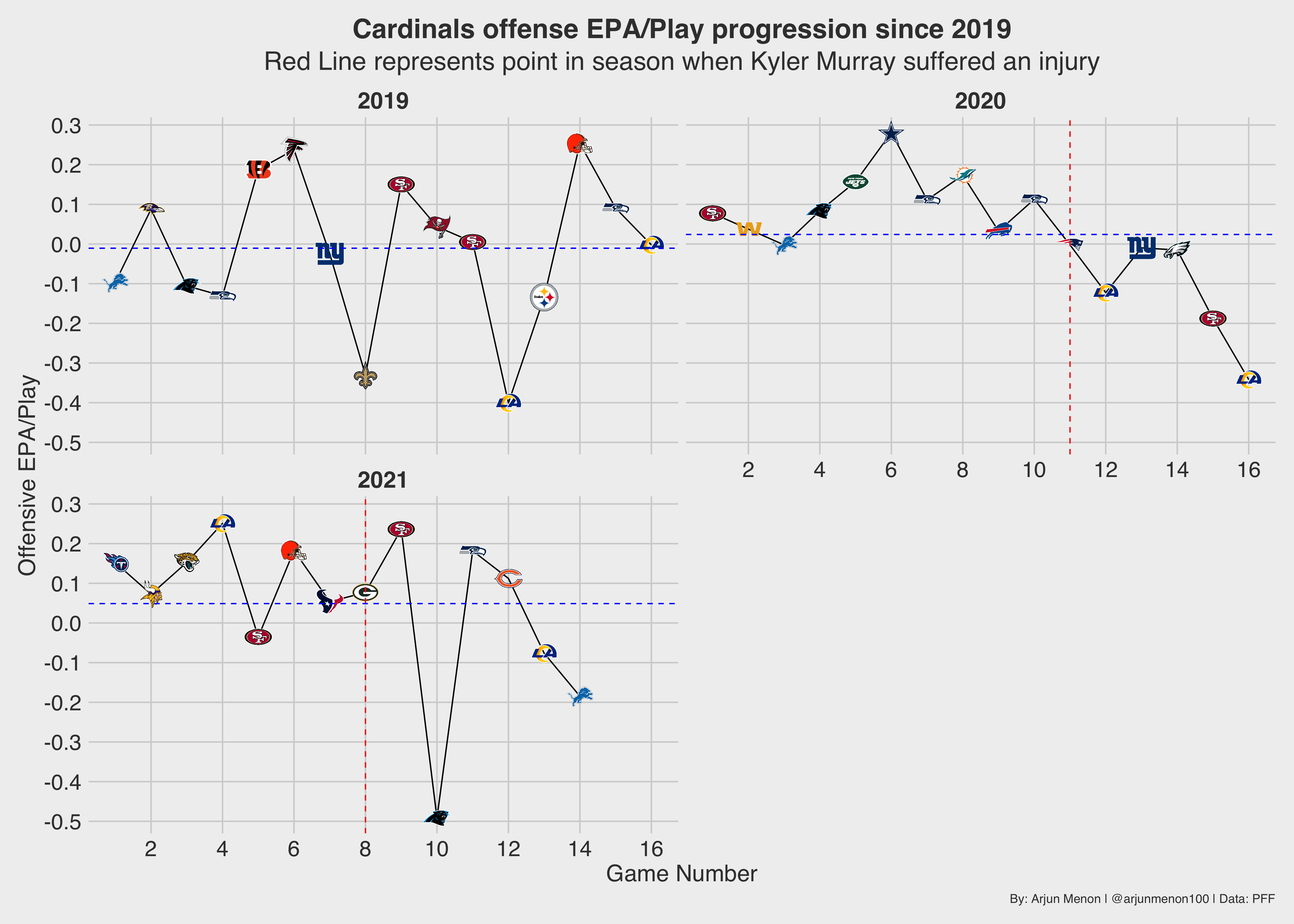 We can see that Kingsbury’s offense has somewhat declined toward the latter part of the season. In 2020, we can chalk that up to Murray's shoulder that occurred in Week 8 and only got worse as the season went on. Nevertheless, in 2021, Murray missed three games after getting hurt.

Interestingly enough, Colt McCoy produced two performances above the Cardinals’ average expected points added (EPA) per play for the entire season in his three games as the Cardinals starting quarterback.

Nonetheless, this downward trend happened at the end of the 2020 season for the Cardinals as well, which begs the question: is this is a Murray or Kingsbury problem?

One interesting aspect of Murray's three losses as a starter is the defenses that Arizona faced. 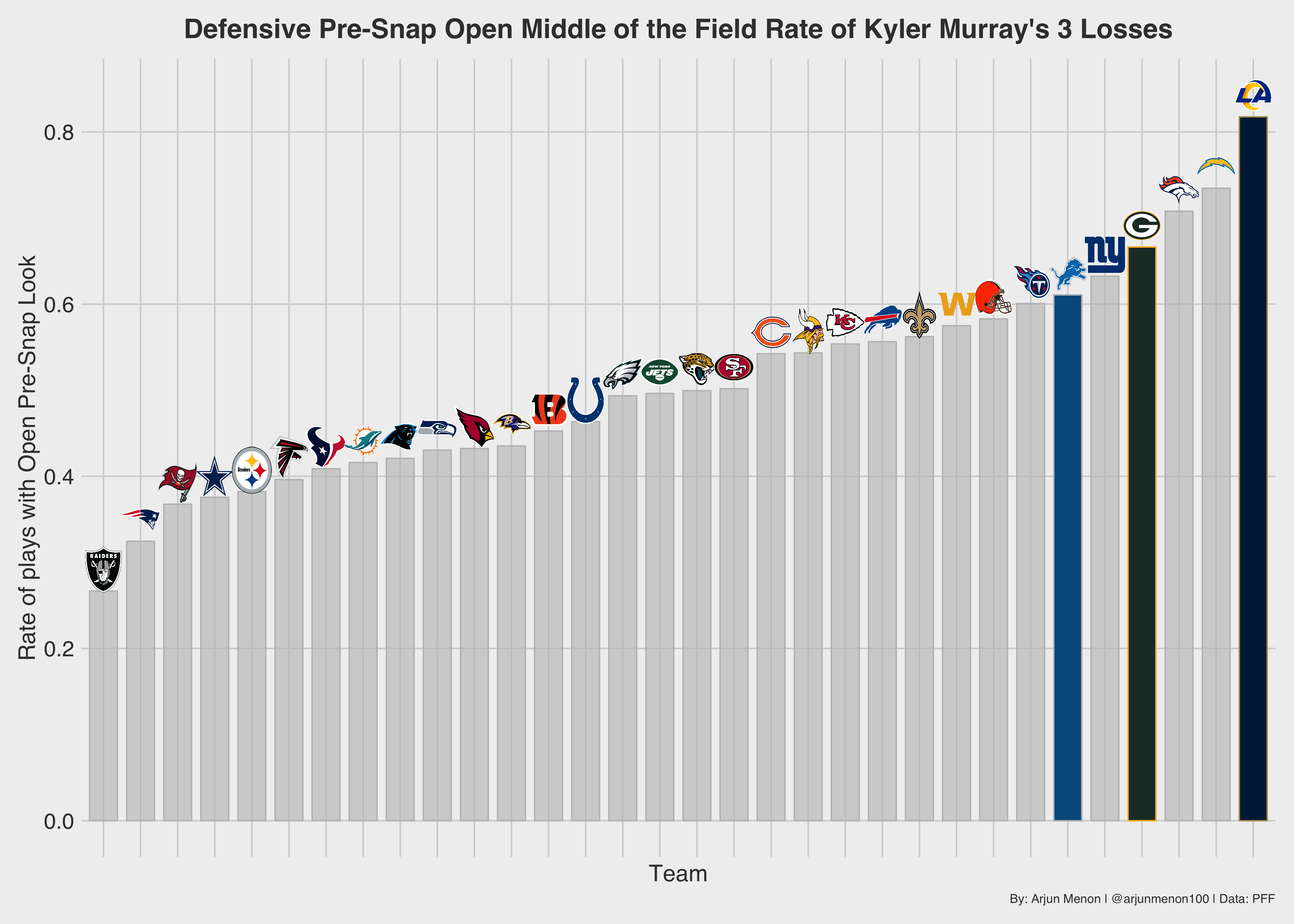 The Detroit Lions, Packers and Los Angeles Rams all rank top six in pre-snap middle-of-the-field open looks. The Rams and Packers are widely believed to be following the Brandon Staley approach to defense, which means limiting explosive plays and forcing teams to run the ball. The Cardinals are a team that this scheme was designed to stop. Prior to Week 15, here are the offenses that face the lightest box counts on early downs.

Defenses are treating the Cardinals' passing attack with respect, playing the fifth lightest boxes on early downs. With an aerial attack that has the fourth-highest PFF receiving grade (80.5) overall, it’s easy to understand why. Coupled with Murray's league-leading big-time throw rate prior to getting hurt, it did seem like Staley’s two-high system was the best way to combat Arizona's offense. When looking at Murray’s performance versus pre-snap two-high looks compared to single-high looks, it matches up.

It is evident that Murray has struggled when defenses play with two-high safeties before the snap. In his three losses against teams that play a lot of pre-snap two-high looks, he has thrown five interceptions compared to only one passing TD (which occurred with 4:46 left in the fourth quarter while down 27-6 against the Lions).

The Cardinals' other concerning trend is that they have not played well offensively when opposing teams are missing key defensive players. The Packers were down cornerback Jaire Alexander and edge defender Za’Darius Smith; the Rams were without All-Pro cornerback Jalen Ramsey; and the Lions were missing a couple of secondary starters. While this may be noise more than anything, the performance against the Rams raised some eyebrows, especially given Arizona's dominant performance against Los Angeles in Week 4.

The Cardinals defense hasn’t been much better over the last couple of weeks. For a defense that ranked No. 2 in EPA per play allowed from Weeks 1-13, it has sported the No. 29 defense per EPA per play in its last two games, which have been losses. Arizona's pass defense has been the worst in the NFL over the past two weeks.

In general, the Rams and Lions are both primarily outside-zone teams that have pretty good offensive lines. The Cardinals have generally played with a lead for most of the year, which is why they use the 11th-lightest boxes on early downs. However, without JJ Watt, Arizona's defense has struggled to get after opposing quarterbacks.

Arizona's pressure splits with and without JJ Watt healthy in 2021

Arizona's play-action defense has particularly struggled. In the Cardinals' three losses to the Packers, Rams and Lions, they have allowed a 0.342 EPA per pass. When zeroing in on the past two games, where the Lions and Rams offenses were almost fully healthy, this number jumps up to 0.492 EPA per pass. Explosive plays have also been an issue for the Cardinals defense, as it has allowed 15-plus-yard passes on 13.1% of its plays in losses compared to only 10.1% of plays in wins.

Looking ahead to the rest of the Cardinals' schedule, things don’t get much easier, as they face the red-hot Indianapolis Colts, the always NFC East-leading Dallas Cowboys and the Seattle Seahawks to close the year.

For a team that started as hot as the Cardinals did, it would be a shame to see them falter down the stretch. They will still likely make the playoffs, but slipping into a wild card seed is in play if they continue to perform poorly on both sides of the ball (DraftKings' wild card odds are at +130 as of December 21st).