Baker's busy week: Quarterback Baker Mayfield requested his release from the Panthers, which they accepted, and he was subsequently picked up on Tuesday by the Los Angeles Rams — just in time for Thursday Night Football. The Rams have the 26th hardest remaining schedule, according to PFF Greenline, which may help Mayfield adapt to his new offense.

The Bills finishing strong: The Bills' win over the Patriots — along with the losses suffered by the Jets and Dolphins — gives Josh Allen & Co. the No. 1 seed in the AFC, but they stay second in our rankings. They will play the Jets and Dolphins in the next two weeks to determine the final standings in the AFC. PFF Greenline gives the Bills a 16% chance of winning the Super Bowl and a 27% chance of winning the conference championship. Despite this, Josh Allen is only +1400 to win MVP this season.

Tough break for Detroit: The Lions may have beaten the Jaguars, but the Giants-Commanders tie drastically lowered Detroit's chances of making the playoffs.

Browns take a step back on offense: Deshaun Watson’s first game back in 700 days resulted in his worst PFF grade since Week 14 of the 2019 season. It’s no surprise that he was a bit rusty. The Browns earned their worst team passing grade (48.3) since Week 1 of this season. It was a defensive game for them, as the only points they scored in the first half came via a punt-return touchdown. The second half wasn’t much better, with points coming courtesy of a fumble recovery, a pick-six and two field goals.

Same old Brady: The Buccaneers rallied in the fourth quarter with a little over five minutes left to beat the Saints. A 44-yard pass interference penalty helped them get into the red zone to score.

The Lions' 2022 season mirrors a stock volatility chart: It soared in the first few weeks before crashing down to the bottom of the rankings only to continue its now steady rise following a last-second loss to the Bills and a dominant win over the Jaguars.

Stuck with one of the NFL’s worst defenses, the Lions have needed to ride an efficient offense all year. And the offense has done its part, scoring touchdowns on close to 30% of drives (third-best in the NFL). Entering Week 14, they rank seventh league-wide in expected points added (EPA) per play and sixth in drive success rate. Offensive linemen Frank Ragnow, Penei Sewell and Jonah Jackson all rank top-five in PFF run-block grade and have formed the core of a solid Lions run game.

Looking ahead, the offensive outlook has only improved, with RB D’Andre Swift now finally healthy and wideouts D.J. Chark and first-rounder Jameson Williams back in the fold to line up alongside superstar wide receiver Amon-Ra St. Brown (90.7 PFF Grade).

As healthy as they’ve been all year, we might need to ponder whether the Lions are making a late-season push to restore the roar.

Following a 7-point loss to the 4-7 Raiders, the Chargers are our biggest faller in this week’s power rankings. The offense scored 13 offensive points against a defense that entered the game ranked 32nd in EPA allowed per play, and the offensive line allowed a combined 21 pressures to Maxx Crosby and Chandler Jones.

While Justin Herbert had his weekly highlight throw to Keenan Allen on a fourth-and-18, he was under duress all game and couldn’t string drives together to help the Chargers pull off the win.

The Chargers defense has taken a big step back this year. Davante Adams went for 177 yards on this secondary, and Josh Jacobs went over 100 rushing yards. Making things worse, the key cog on their defensive line, Sebastian Joseph-Day, also got hurt during the Raiders game, which could be a huge loss for the rest of the season.

Quarterback injuries: Week 13 wasn't exactly a great week for some of the NFL's quarterbacks. Jimmy Garoppolo is out for at least seven weeks with a foot injury, Matthew Stafford was placed on injured reserve, Tua Tagovailoa injured his ankle and Lamar Jackson suffered a knee injury.

A big loss for the Seahawks: The Seahawks rely heavily on RB Kenneth Walker III, so his ankle injury may negatively impact the team. Among rookie running backs, Walker is second to only Houston's Dameon Pierce in terms of WAR. 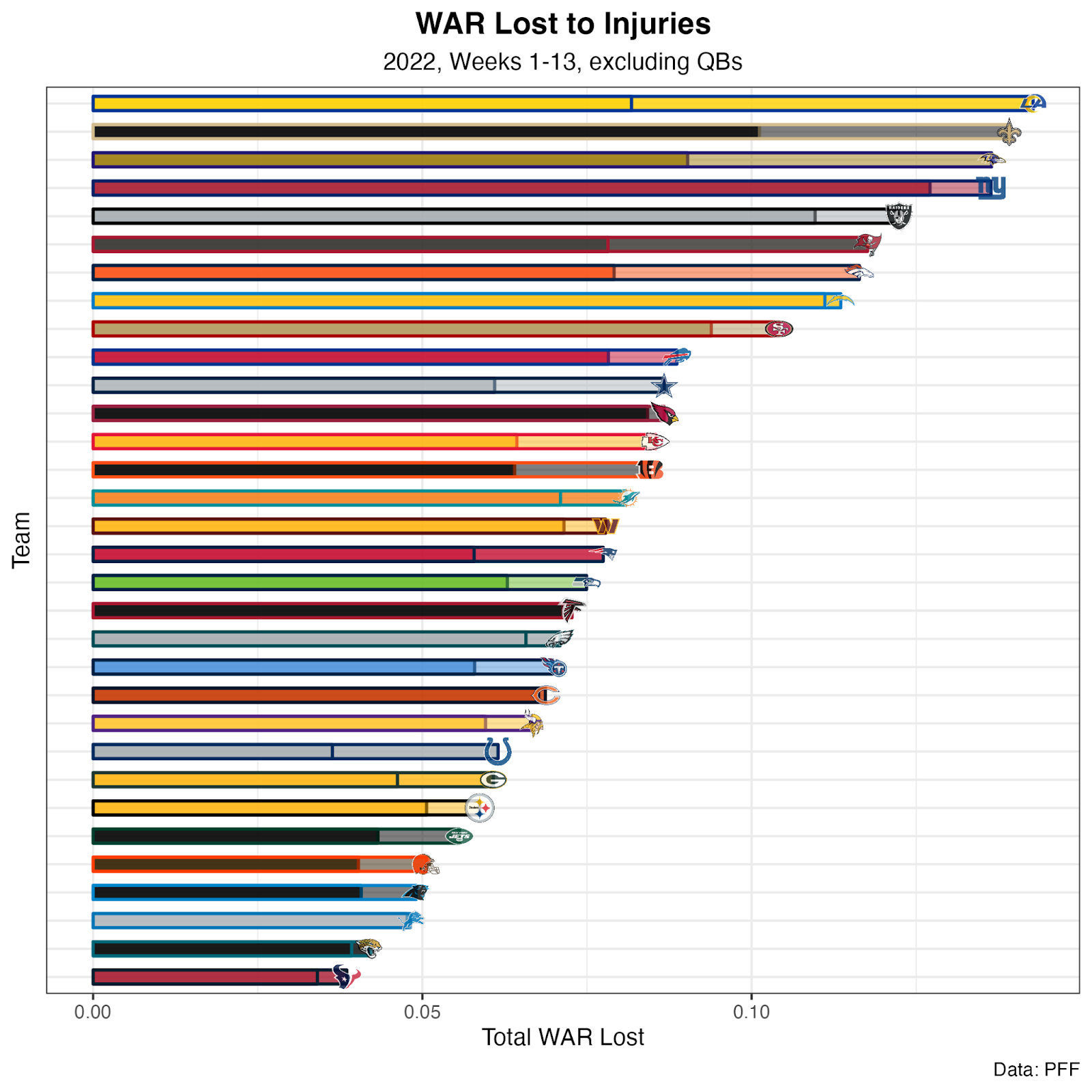 Bengals lose Hayden Hurst: The Bengals had not suffered many injuries on either side of the ball, but Hayden Hurst left the game with a calf injury last week. Hurst is 10th in terms of WAR among tight ends this season (0.199). His backups, Devin Asiasi and Mitchell Wilcox will look to fill the void.

Reinforcements for Brady and the Bucs: The Buccaneers have been banged up this season, but there is some hope, with left tackle Tyron Smith designated to return from IR on Wednesday. 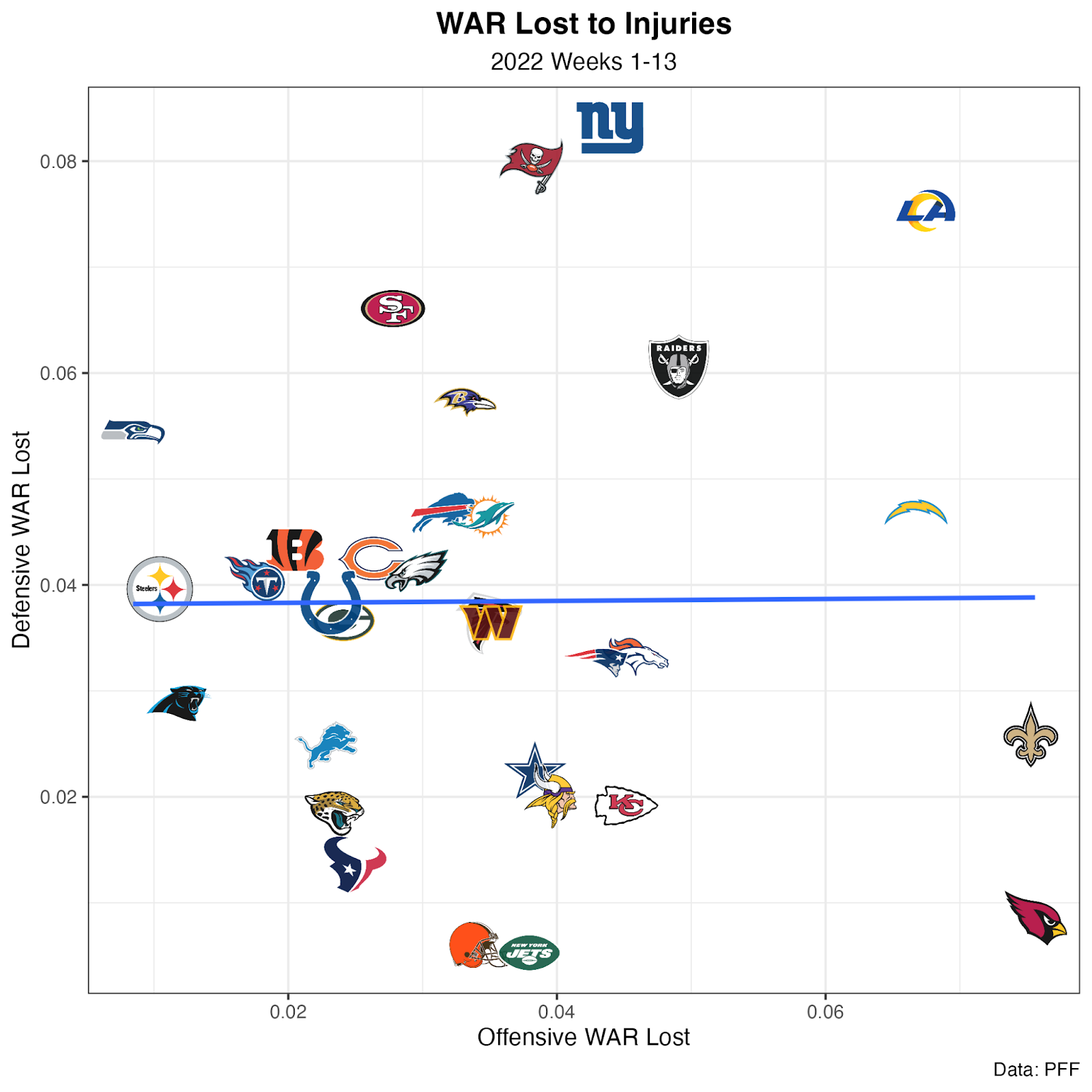 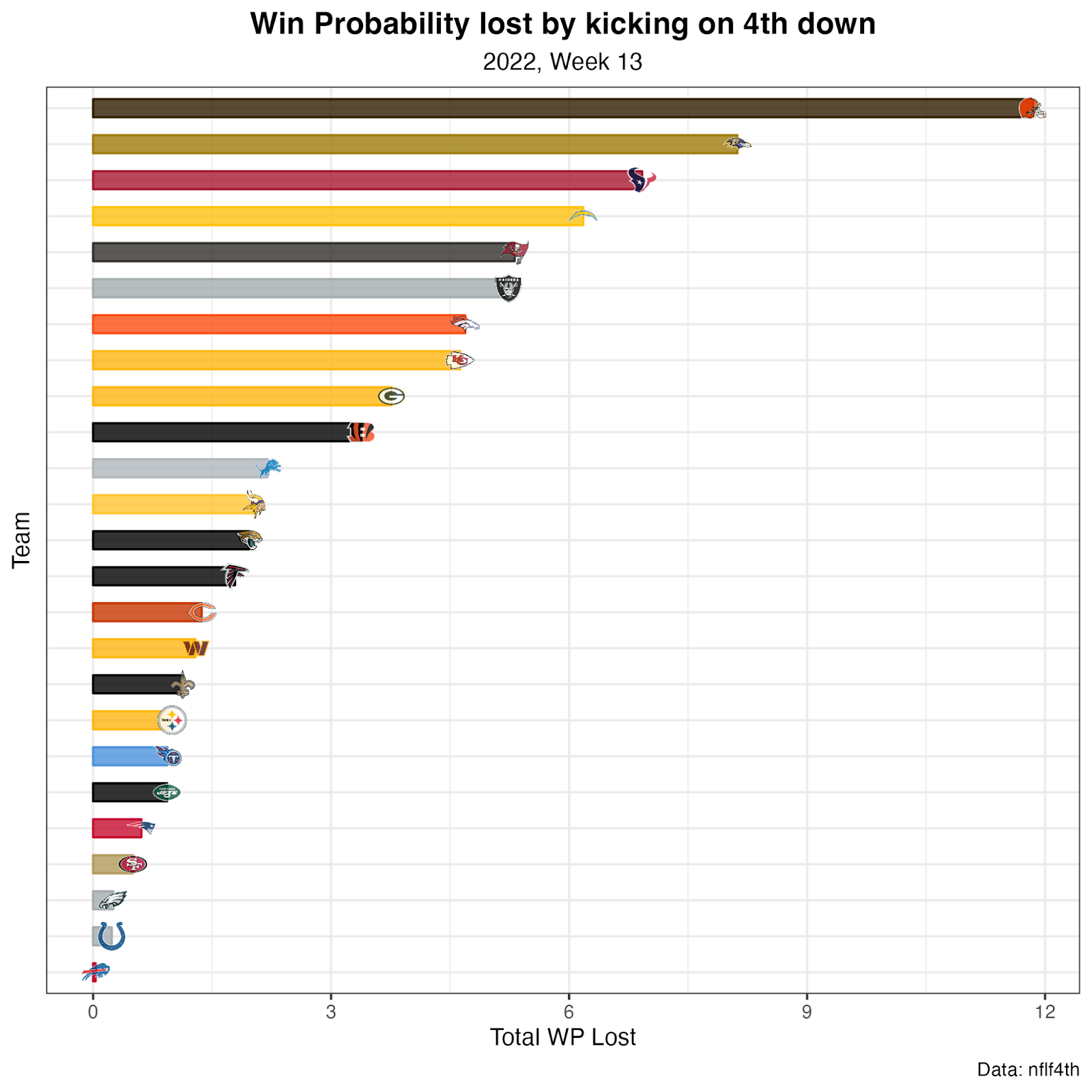 Browns punting away: Although the Browns ended the game with a 27-14 win over the Texans, they struggled on fourth downs. They punted six times for the second week in a row. 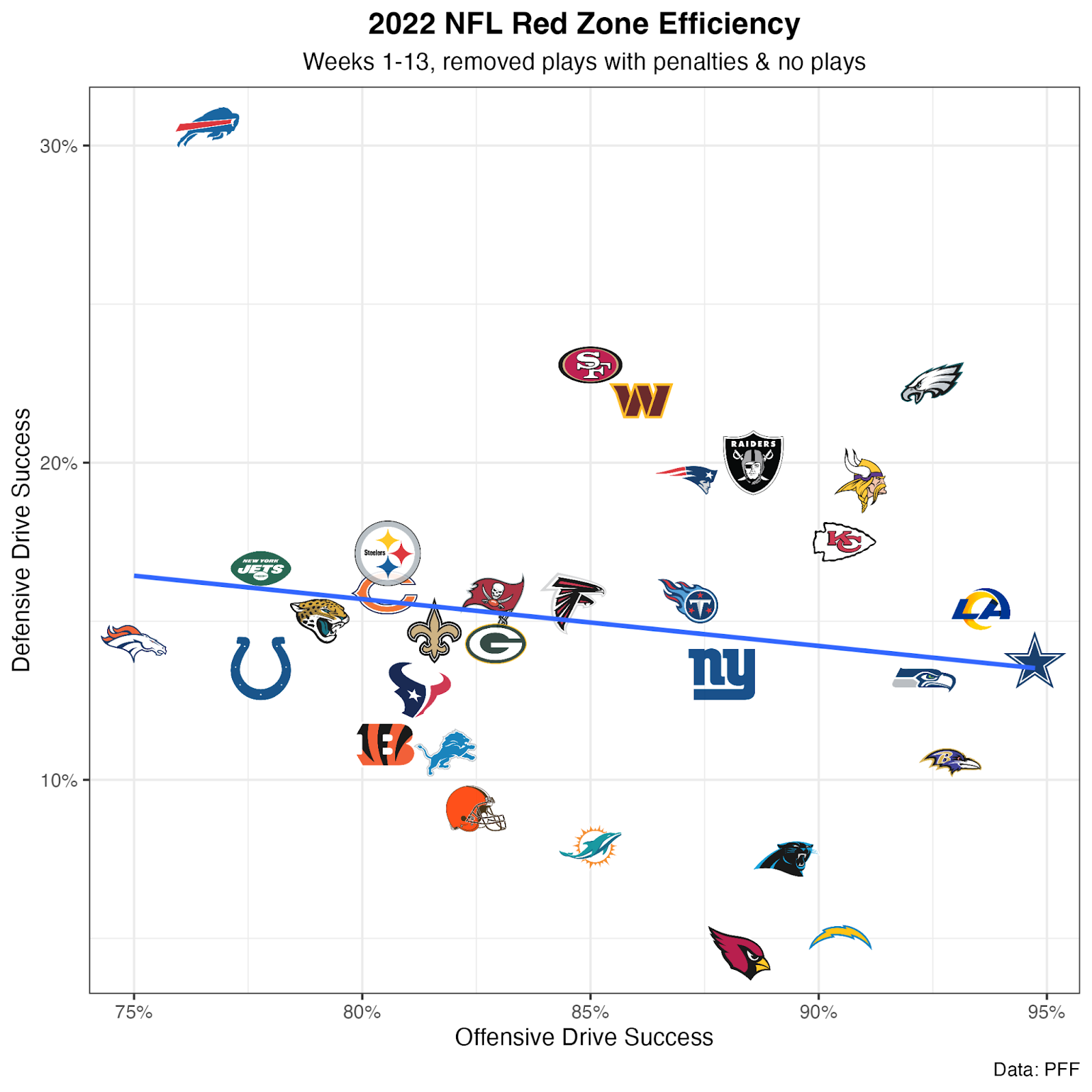 The best and the worst: Out of seven plays in the red zone this week, the Chargers converted none of them. The Lions, on the other hand, converted all four of their drives this week.

Stepping up when it matters most: On the other side of the ball, the Bills have stopped 30.6% of red-zone drives. The Broncos defense has also been successful in the red zone, having allowed the least EPA per red-zone play (-0.282).