Washington’s top draft picks are catching on quickly during training camp this summer and could assume key roles this season for the Football Team.

Linebacker Jamin Davis, a rocked-up first-round pick out of Kentucky, flies around the field in the middle of Washington’s starting defense. He didn’t appear to lose any speed or recognition with pads coming on for the first time this summer at the Inova Sports Performance Center in Ashburn on Tuesday.

Speedy wide receiver Dyami Brown, a third-rounder out of North Carolina, is unlikely to be a Day 1 starter, but he has impressed during his rookie summer. Terry McLaurin is a lock to start, along with Curtis Samuel, a high-priced free-agent addition who is currently on the PUP list and COVID/reserve. Cam Sims, a 2020 starter, and Adam Humphries, an offseason addition, are battling for the third starting spot. Humphries had the better day Tuesday as Sims had some issues with drops. There doesn’t seem to be any major concern surrounding Samuel, who played in offensive coordinator Scott Turner’s system with the Carolina Panthers and should be able to hit the ground running when he’s back on the field.

Brown received some on-field instruction from wily vet Ryan Fitzpatrick (who is clearly locked into Washington’s No. 1 QB role this season) and took off for a big play on the next snap. Brown is dynamic, and his speed and quickness are evident on the practice field. 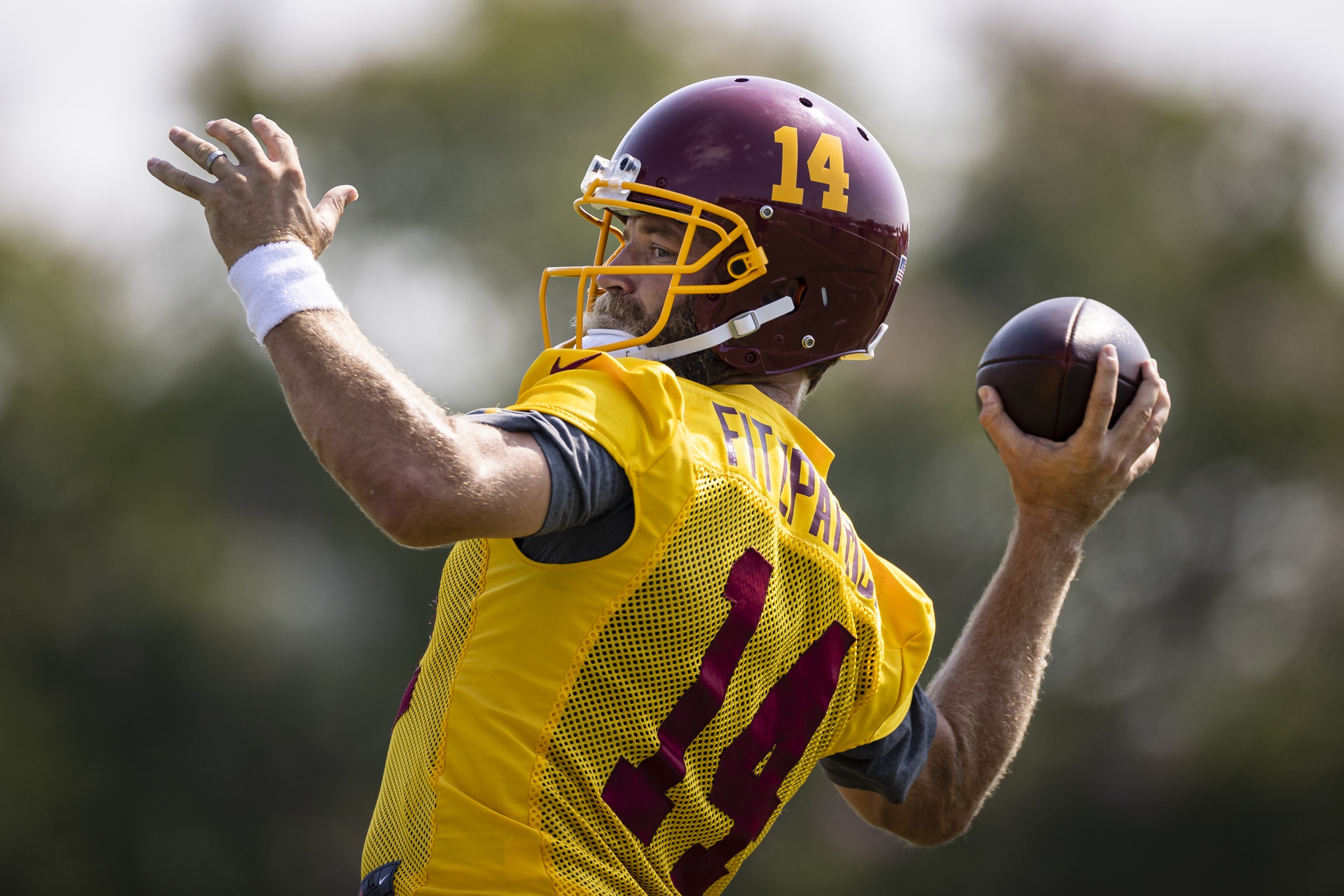 Fitzpatrick’s experience playing in different schemes is paying off in Turner’s Air Coryell system, and he looks comfortable on the practice field. Washington’s play of the day came on a throw from Fitzpatrick to tight end Logan Thomas, who leaped and made a contested catch for a touchdown over cornerback William Jackson III. Thomas, a converted quarterback, recently signed a three-year contract extension worth $24 million.

Taylor Heinicke served as the No. 2 quarterback with Steven Montez taking on No. 3 duties as Kyle Allen continues to nurse an ankle injury.

Second-round pick Sam Cosmi received reps at right tackle, as Brandon Scherff’s placement on COVID/reserve continues to shake up the offensive line. Scherff is PFF’s fifth-highest-graded guard since 2019, so his absence has been felt early in camp.

Washington head coach Ron Rivera was impressed with Cosmi’s first NFL practice in pads. He noted that Cosmi is coming along “nicely” and “held his own” against imposing defensive ends Chase Young and Montez Sweat.

Cornerback Benjamin St. Juste, a third-round pick out of Minnesota, is also competing for a starting spot and broke up a pass intended for Brown during 1-on-1s on Tuesday.

Young, McLaurin and second-year running back Antonio Gibson are also burgeoning stars in the NFL.

It appears head coach Ron Rivera’s message about vaccinations was heard loud and clear last week when he implored players to get the shot. Washington’s vaccination rate has increased from 60 percent to 84 percent in the past week, a source told USA Today’s Mike Jones.