The Titans' scheme has made Ryan Tannehill a top-10 quarterback

To say Ryan Tannehill has been a pleasant surprise for the Tennessee Titans would be a vast understatement. The Titans are 6-1 in Tannehill’s starts and firmly in the playoff race. But what the Titans’ new starter has provided to the offense goes well beyond QB Wins — Tannehill ranks first among quarterbacks in nearly all of our critical passing factors: clean-pocket, standard dropback and no-play-action passing. These are the more stable measures of passing, which points to continued success. He also leads all passers in the percentage of positively graded dropbacks and is sixth in avoiding negatives.

And it’s not only PFF that has Tannehill hear the top of quarterback measures. The Athletic’s Ben Baldwin has developed a combination of quarterback efficiency and accuracy that has Tannehill looking down on the competition, and Tannehill is completing a league-leading 10% more passes than expected, according to NFL Next Gen Stats. Tannehill is even changing the minds of noted skeptics like Football Perspective’s Chase Stuart, who acknowledges that this might finally be his long-forecasted breakout season.

Tannehill has been nothing short of a revelation, and the Titans are reportedly discussing a long-term deal to keep the good times rolling well beyond this season. Despite how good Tannehill has looked this season, though, we’re still talking about only a 250-dropback sample of stellar play, which is a relatively short run of success that has followed more than 3,000 career dropbacks with the Miami Dolphins that inspired so little confidence he was sent packing for a pittance.

In this article, we’ll take a numbers-heavy approach, along with supporting analysis from PFF analyst Solomon Wilcots, to figure out if we can trust that Tannehill will continue to play at a high level or revert back to his mediocre play of the past.

Looking back at the past

What we're seeing from Ryan Tannehill this season appears like a long-awaited breakout. Looking back to Tannehill’s past, we’ll see that he had flashed a few times similarly with the Dolphins. 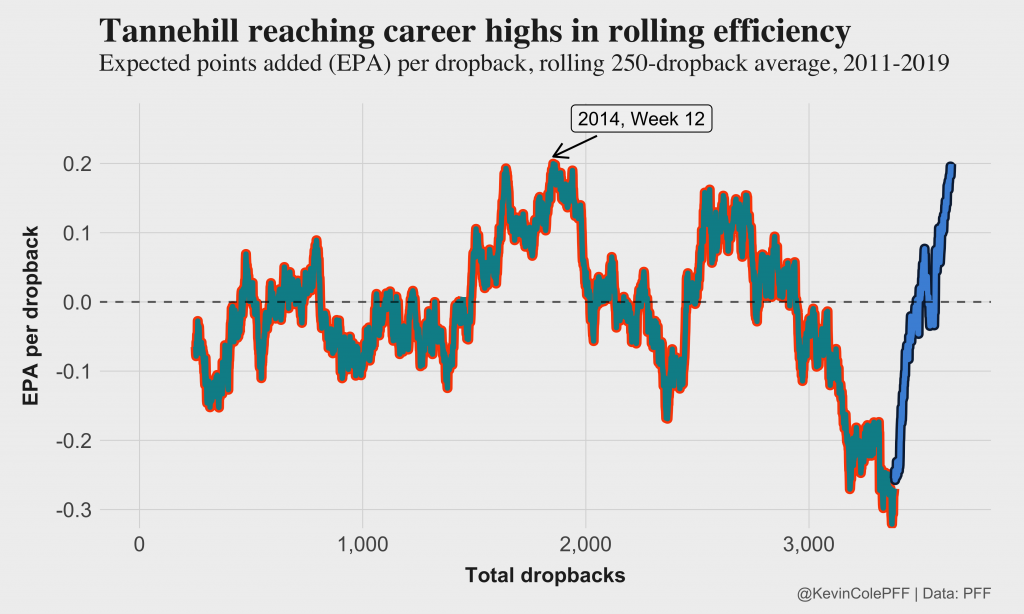 Tannehill has been excellent of late. He’s also done it before and then faded back to earth.

A systematic way of forecasting Tannehill’s go-forward passing skill is through the lens of Bayesian updating, which systematically incorporates past and recent results, weighing each accordingly. For more background on the technique, you can look through previous data studies that using Bayesian updating to compare Deshaun Watson to Patrick Mahomes and to give perspective on Baker Mayfield.

Tannehill is a historical outlier in the large separation between how he was assessed by PFF passing grades and his EPA-based passing efficiency. Tannehill’s forecasted passing grades peaked in his second season then slowly fell before a large dropoff at the end of his time with the Dolphins. EPA forecasts were much steadier over time, staying slightly below average until the last season in Miami. 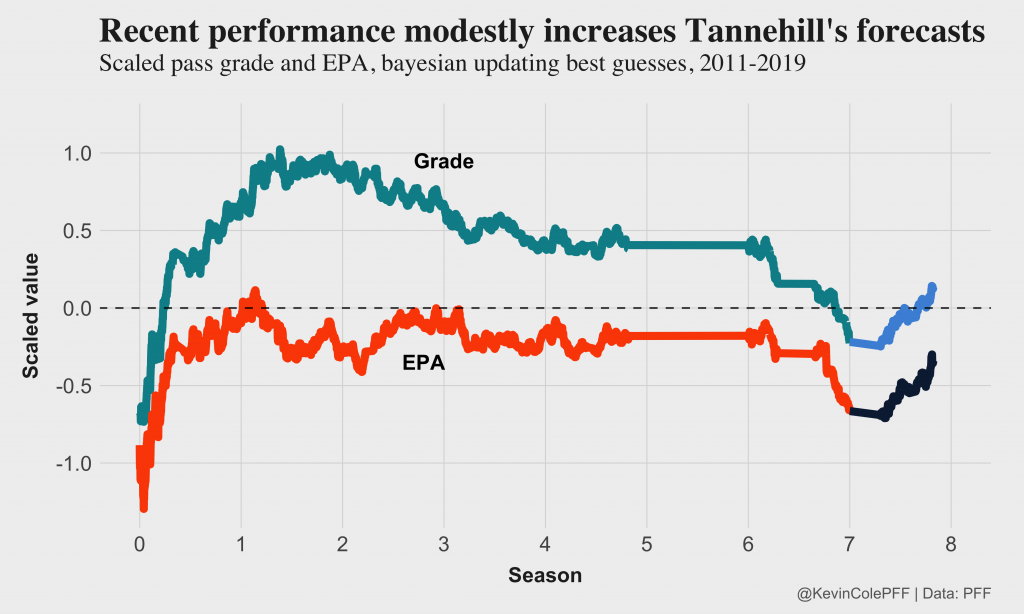 Tannehill’s best-guess forecasts for PFF passing grade and EPA per dropback have risen with his strong performance this season with the Titans, though probably not as much as you’d expect. One of the benefits of using a technique like Bayesian updating is that it tells us how much to weigh Tannehill’s 256 dropbacks this season versus 3,000-plus that came before.

What Tannehill has done this season is impressive, and it's potentially a turning point, yet it still should only marginally affect our assessment of him as a passer. Incorporating the entirely of Tannehill’s career, our best guess for how Tannehill will perform going forward is roughly in line with an average quarterback.

Bayesian updating not only provides a single, best-guess estimate but also allows you to form a range of potential outcomes that narrows with more evidence. 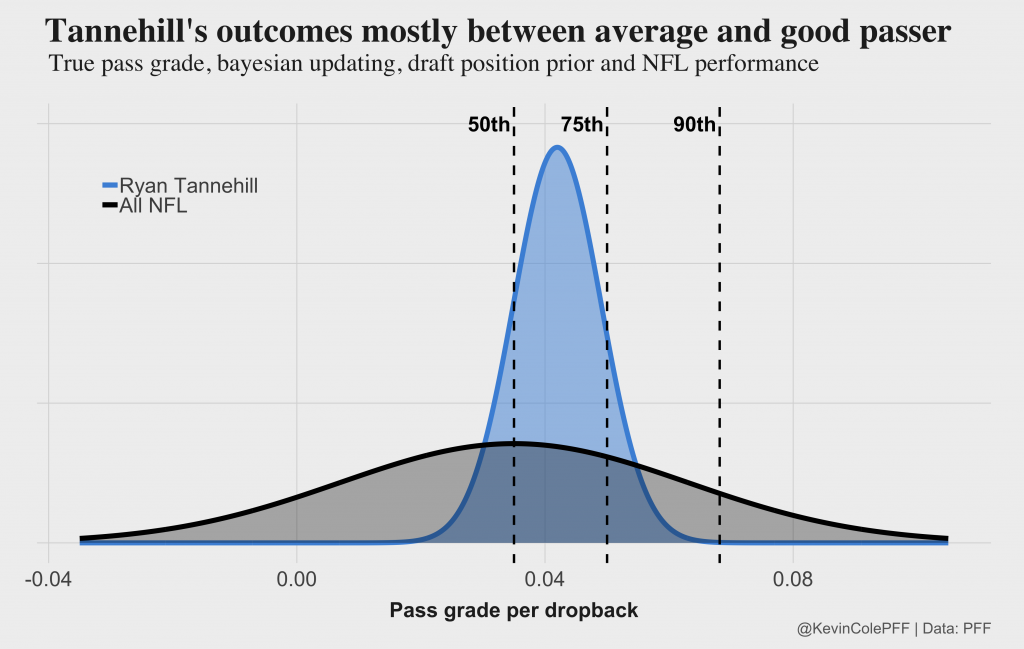 The plot above visualizes the current estimate of Tannehill’s go-forward PFF passing grades, with the dashed line representing the 50th, 75th and 90th percentile outcomes based on historical franchise quarterbacks. Tannehill’s distribution falls predominantly between what I would call average (50th) and good (75th) quarterback play. The probability that he will be truly elite going forward (90th) looks exceedingly small, despite playing that way this season.