Timing the NFL Team Rebuilding Curve: Why 2021 rookie QBs are set up for success

I introduced a concept of the quarterback development curve while recording an episode of the Unexpected Points podcast last week. The curve is a way of thinking about how conducive the surrounding environment is for success at the time an NFL team drafts its prospective franchise quarterback. The theory is that a pick like Zach Wilson, for example, has a greater chance to succeed than Sam Darnold primarily because the New York Jets are further into their rebuild cycle now than three years ago.

Luckily, the quarterback development curve, which I’m rebranding as the team rebuilding curve, lends itself to testing. There’s no perfect measure for assessing the readiness of surrounding offenses to enhance the play of their new quarterbacks, especially by traditional statistics. Luckily, we at PFF have the wins above replacement (WAR) metric, developed by our research and development group to quantify the value of every player at every position in a single, comparable figure. The basis of the WAR metric is PFF’s play-by-play grading. We have seasonal WAR figures for every player going back to 2006.

For this analysis, I predicted the WAR generated by players in a given season using historical player WAR and, for younger players, draft position as the relevant features. I then added up the non-quarterback WAR forecasts to compare surrounding talent to how rookie quarterbacks performed versus expectations during their first three seasons. I also used PFF's WAR metric to judge quarterback performance.

What I found is compelling evidence suggesting that surrounding talent can enhance early career quarterback WAR even though PFF grades, the numbers powering WAR, are designed to separate the play of the quarterback from his surroundings. But not every surrounding player and position has an equal impact on quarterback play.

I looked into different forms of teammate-predicted WAR, my proxy for talent, around rookie quarterbacks. I tried including all offensive and defensive players, only the offensive players and different offensive mixes. The strongest relationship and most statistically significant variable for surrounding talent includes only primary receiving and blocking positions, meaning wide receivers, tight ends, offensive tackles, guards and centers. 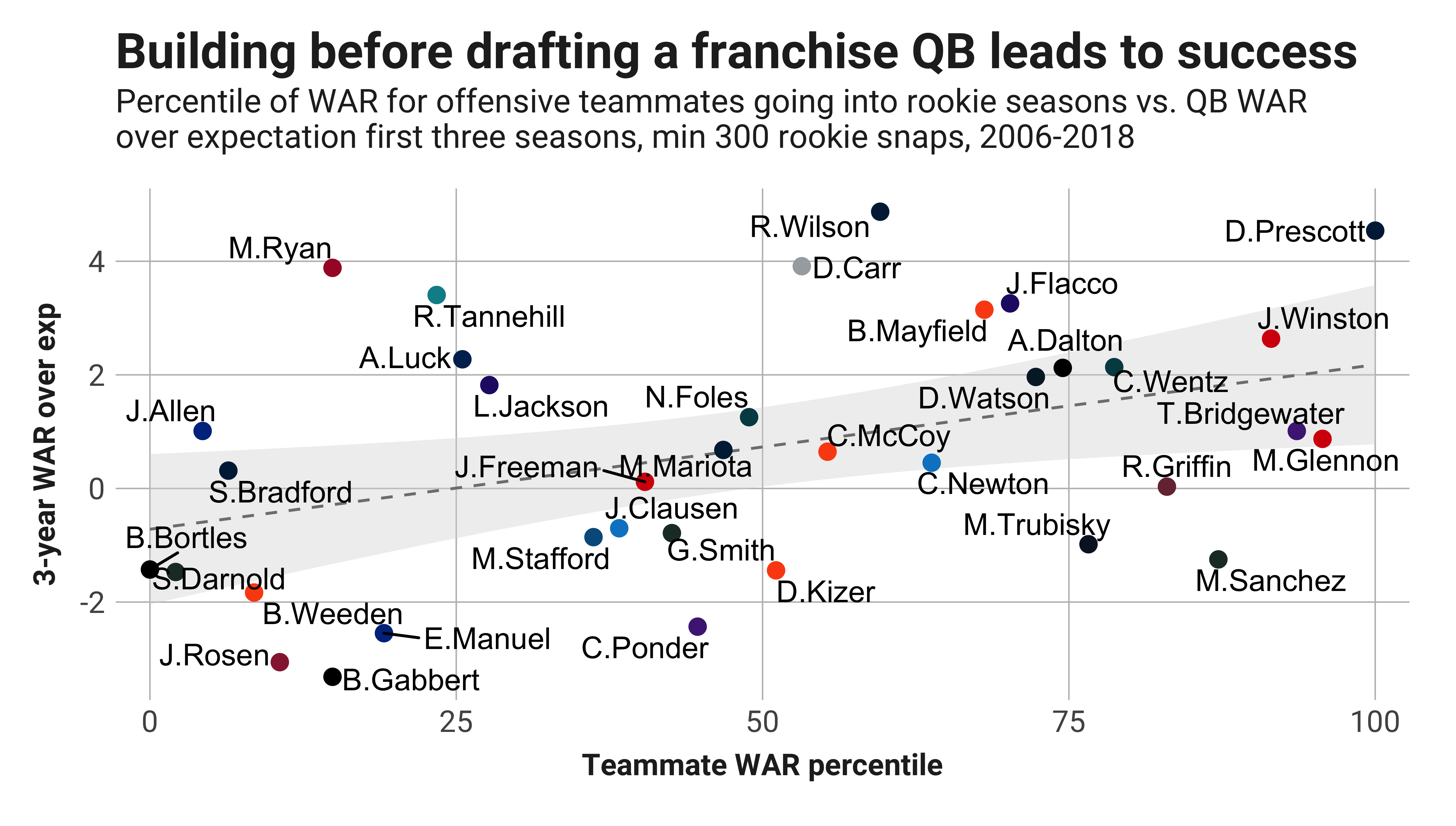 There is a clear trend of quarterbacks’ early career WAR rising with the level of their teammates. The results are noisy, with an r-squared of 0.15, but the statistical significance is well below the 0.05 p-value threshold (i.e., less than 5% probability of the null hypothesis being true, or that there is no relationship).