NFL teams that should see luck regression in 2020: The Cleveland Browns are set to bounce back, the New York Giants could stumble

As humans, we are often quick to dismiss the role of luck in recent events. It’s much easier for us to attach the after-the-fact explanations to why something happened than to it is acknowledge that the world we live in is random and, in many cases, unpredictable.

No one wants to attribute recent success to luck, and members of the football community are no anomaly. But that doesn’t change the fact that luck is a huge contributing factor when it comes to the success of NFL franchises.

Looking at teams that stood out as outliers in luck-driven categories in 2019 — both on the low and high end — could give us an idea of the teams that could be in store for regression in 2020.

PFF’s Timo Riske recently looked at how luck, and not skill, can help pass-rushers to career years. The idea behind the piece is that sacks can be noisy from season to season and, as the chart below shows, that better pass-rushers don’t convert their pressures into sacks at a higher rate. 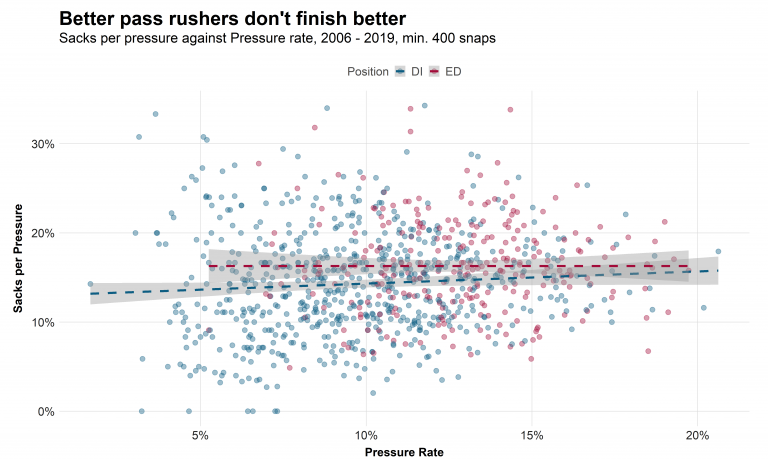 The players (and teams) who consistently finish with high sack totals do so because they get pressure at a higher rate, and not necessarily because they are inherently better at converting those pressures into sacks. That allows us to look at the teams at each end of the pressure-to-sack conversion spectrum during the 2019 season to determine potential improvement or decline in team sack totals next season.

Highest percentage of pressures that resulted in sacks (2019 regular season)

The Panthers led the way in the percentage of pressures that ended up sacks, something that was reflected in reasonably strong sack totals for guys such as Mario Addison and Bruce Irvin — both of whom are no longer with the team — despite middling pressure numbers. That group may have changed a lot up front with the introduction of Derrick Brown, Yetur Gross-Matos and Stephen Weatherly, to go along with another year for Brian Burns to progress, but it’s still unlikely that Carolina will convert pressures at the same rate in 2020 as they did in 2019.

Lowest percentage of pressures that resulted in sacks (2019 regular season)

The Lions pass-rush was one of the least effective units in the NFL last season, for two reasons. Firstly, they didn’t get pressure at a high rate, as their 29.2% pressure rate as a team ranked just 30th in the NFL. Secondly, they converted those pressures into sacks at the lowest rate in the NFL.

Detroit will be relying on additions like Julian Okwara and Jamie Collins at linebacker to help Trey Flowers get pressure consistently, but even if they don’t significantly improve their pressure numbers, the team should come away with more sacks in 2020 simply due to variance.

Even more so than sacks, turnovers are massive needle-movers in the outcome of a given NFL game. ESPN’s David Hale wrote an interesting piece on the perceived role of luck on turnovers back in 2018, and it includes this quote from Power Rank Analytics’ Ed Feng:

“The analytics say that turnovers are way, way more random than coaches or fans think. It’s not a perfect way to say there’s no skill. It’s just that turnovers are a really subtle thing, and randomness plays a much bigger role than people want to think.”

When you look at the recent improvement that the Miami Hurricanes made in the turnover differential department, it’s easy to look back and attribute the success to the introduction of the turnover chain.

In that same ESPN article, Manny Diaz may have said it best when he said, “I’ve read all the data, but I do think there are things that at least give you a better chance.”

I’m not going to disagree that there are ways to put yourself in a better position to come away with the ball on defense, but the data still points to the idea that there is a whole lot of year-to-year randomness that goes into turnovers. A 2014 Harvard sports study on turnover luck found that just over half of seasonal turnover differential is due to chance.

One way to try to pinpoint defenses that could see a regression in 2020 is to look at:

1. Average to below-average defenses that forced turnovers at a high rate

2. Good defenses that didn’t take advantage of their turnover opportunities