Renner: Rookie QB Tua Tagovailoa can lead the Miami Dolphins to the playoffs in 2020

Sitting at 3-3 and heading into their bye week, Miami Dolphins head coach Brian Flores had a conundrum on his hands. With playoff-caliber teams in the Los Angeles Rams and Arizona Cardinals up next on their schedule, how the Dolphins fared over that next couple of weeks would be the inflection point of their season.

Even though quarterback Ryan Fitzpatrick was playing at a high enough level that very few would have ever thought about benching him — the veteran's 75.3 overall grade ranked 16th among all starters at the time — Flores made the difficult decision to do just that.

It was inevitable that the franchise would be turned over to fifth overall pick Tua Tagovailoa at some point, but the timing after a 24-0 blowout of the New York Jets was shocking to many on the outside looking in. It was a move that could have backfired quickly had Tua crashed and burned early on in his career.

After back-to-back wins, however, it’s evident that that hasn’t been the case. And while it may not be perfect quite yet, Dolphins fans should be elated about their young quarterback's continued improvement through two starts.

The early game plan against the Arizona Cardinals was much like what we saw against the Rams — play action, screens and quick rhythm passes dominated the call sheet. It was when the training wheels started to come off, though, that we saw why Tua was a top-five pick.

The first play that truly caught my eye came at the start of the second quarter.

Here, the Dolphins are running mesh with two verticals on the outside. Tua’s eyes hold the middle-of-the-field safety, and once he realizes the Combo Cover 3 isn’t a good coverage to throw the mesh, he doesn’t even hesitate on the inside go route. Here is where the receiver is, relative to the defensive back, when he decides to let it rip. 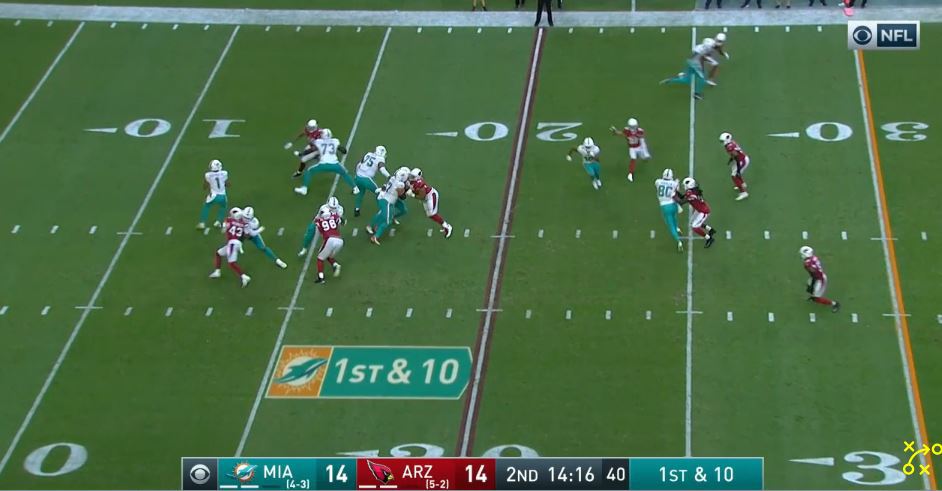 This isn’t Alabama, though. This is the NFL. If he were to hesitate at all or stare down the go-route until he knew his receiver had stacked the defensive back, it would have been too late — the safety gets there in time to make a play.

What I loved was that the Dolphins dialed up the exact same concept on the very next play, and Tua did it again (although the play was offset by an illegal hands to the face penalty).

With timing, placement and manipulating safeties being so important to downfield success in the NFL, it’s very encouraging to see reps like that from Tua this early on.

The next play that immediately grabbed my attention was on a second-and-6 with 4:21 left in the second quarter. The Dolphins are in max protection off play action with only three guys out in a route as the team tried to help out what was an overmatched offensive line.

Even still, pressure gets home in a blink of an eye off the left side. It’s Tua’s reaction to pressure that’s very unrookie-like here. His first move is to climb the pocket — a must in the NFL where edge rushers can track you down with ease if you try to escape out the back. Next, his eyes never drop or stop scanning. He works all the way back to an out route to DeVante Parker for a first down.

While he had some impressive runs later in the game that we’ll get to, it’s great to see that simply scrambling isn’t his first instinct.

All those plays pale in comparison to the game-tying scoring drive Tua led at the end of the third quarter into the start of the fourth. It was a masterpiece. After Tua was put behind the eight ball with two straight runs to start the drive that netted them 1 total yard, he put the offense on his back. He threw this hitch route to Parker at the sticks with such perfect timing and, given the concept, was quite literally the only time and place a ball could be thrown for his receiver to net a first down.

It was another max protection with three men in the route with a check-release from the running back. The cornerback on that side, Patrick Peterson, is working from the top down on the play and can see the blitz getting home. This is a window that will be open for a fraction of a second once Parker hitches up before it's closed for good. The ball leaves Tua’s hand before Parker has even turned to locate the ball in what was a masterclass in route timing.

From there, well, let’s just say Tua was feeling himself.

the sequence where Tua blacks out pic.twitter.com/8Gx1ot4J12

Two filthy scrambles. Another perfectly timed deep hitch against Patrick Peterson. A well-placed ball and good decision to throw the fade RPO. That drive wasn’t a rookie being eased into the NFL anymore; it wasn’t a superior scheme against an inferior defense. That was high-quality quarterbacking carrying an offense to a score.

More so than any passer rating or yardage total, that’s what you want to see from a rookie quarterback to feel confident about them being your franchise guy.

Now, it obviously wasn’t all sunshine and rainbows for Tua. His throwaway that stayed too close to the field of play early in the game that was nearly picked off was a big no-no. Chalk that up as a rookie mistake and one I don’t anticipate him making any time soon.

The biggest thing he needs to improve on is coming off a side of the field quicker and getting to his next read. That was evident when he got locked on a two-man china concept late in the fourth quarter and couldn’t get back to a wide-open crosser from Parker.

Those are things you hope to see more and more as this season wears on.

Through two starts, though, we’ve already seen enough continued improvement to get excited about. If the season ended today, the Dolphins would be in the playoffs. That’s not a phrase I thought I’d utter this far into the season. While the defense deserves the bulk of the credit for that, don’t be surprised if they get there on the back of Tua’s left arm, as well.