Week 13 saw a number of players put together breakout performances after previously quiet seasons — from a handful of rookie safeties to the Redskins' young nucleus on offense. And to tell the stories of those players and what they accomplished, here are 20 stats to know entering Week 14.

After earning 80.0-plus grades in the first three games of the season, Brady has yet to reach that threshold in any of his past nine games. He would need 80.0-plus marks in each of his final four outings to match the seven that he put up in 2018. And if he were to finish the year with his current numbers, Brady would have his lowest adjusted completion rate (61.1%) since 2013.

Guice joined teammate Dwayne Haskins in having a breakout day, posting 116 yards after contact. That total ranks tied for seventh-most in a single game for a running back this season. After tearing his ACL in the preseason of his rookie campaign and missing most of 2019, Guice flashed his potential in Week 13.

Seven carries were all it took. That was enough for Hunt, who forced a whopping seven missed tackles on his attempts, meaning he averaged one missed tackle per carry. Hunt became the first running back with at least five carries in a game to reach that feat since Damien Williams in 2016. And he’s the first to do it on seven carries since Chris Ivory in 2014 when the Jets running back forced eight missed tackles.

4. Sean Lee made his mark in the run game

Lee's very best days are likely behind him at the point, but he continues to be a force in the middle of Dallas’ defense. On Thanksgiving, he racked up seven run stops (most among all linebackers in Week 13), ranking second at the position in run-stop percentage (22.6%).

5. Sam Darnold and Jamison Crowder were not on the same page

As Robby Anderson continues to see an increased target load in recent weeks, Crowder and Darnold have struggled to connect. In Week 13, Crowder saw just three catchable targets among nine total targets, hauling in two and dropping one. The 22.2% catch rate was the lowest mark of Crowder’s season thus far.

6. It was a rough week for Miami’s rookie guards

7. George Kittle’s drop woes from 2018 have been erased

After finishing tied for the third-most drops among tight ends in 2018, George Kittle has simply left no doubt about his improvement in 2019. The third-year star hasn’t dropped a ball on 66 targets. Meanwhile, the next best at the position without a drop is Tyler Higbee, who has a mere 40 targets to his name. 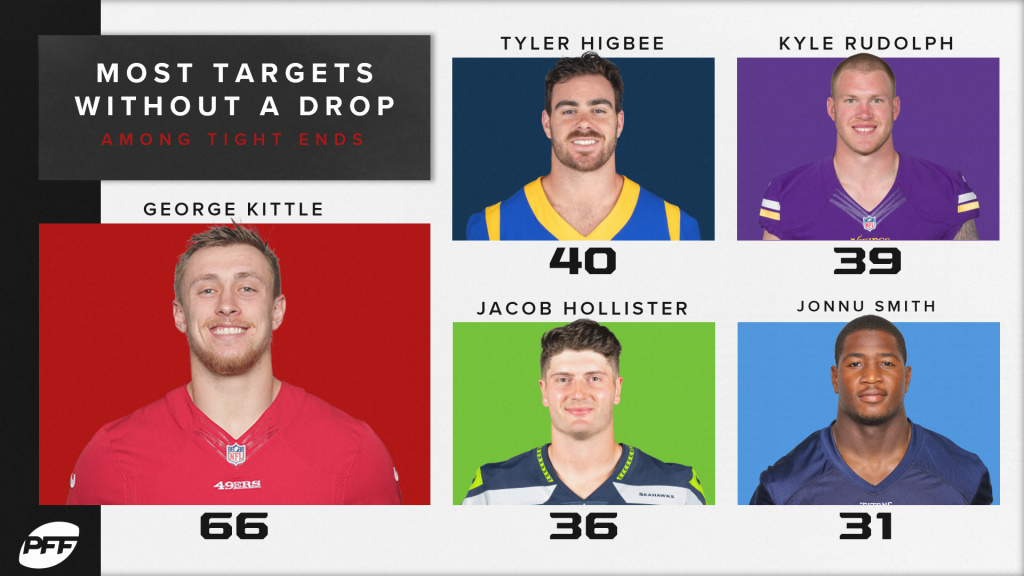 Although he’s missed the past four weeks of action, Stafford is still the king of the fourth quarter in 2019. His 10 big-time throws are tied for first with Carson Wentz — and even then, Wentz has nine turnover-worthy plays in the final 15 minutes compared to just one for Stafford. As a result, Stafford’s 88.4 passing grade in the fourth quarter ranks first among quarterbacks. With the Lions now eliminated from playoff contention, it remains to be seen if Stafford will be thrust back into action.

Martin has played 60 pass-blocking snaps in a single game only twice in his career — with the second coming in Week 13. And both times, Martin hasn’t allowed a single quarterback pressure. Volume clearly isn’t an issue for the sixth-year guard out of Notre Dame.

10. Grady Jarrett rebounded in a big way from a forgetful Week 12

Perhaps, Jarrett took notice of last week’s “20 stats to know,” where his inefficiency in run defense in Week 12 was highlighted. He put forth a rebound effort this past week, notching five run stops to lead all interior defenders in run-stop percentage (38.5%).

11. Have a day, Dwayne Haskins

Haskins put forth the best effort of his young career in Week 13, tossing three big-time throws while going without a turnover-worthy play. It wasn’t perfect — Haskins finished with a 69.6% adjusted completion rate that ranked just 23rd — but it was a promising sign for a rookie signal-caller who has taken plenty of heat for subpar performances in his first year. For the performance, Haskins earned an 85.4 overall grade, ranking third among qualifying quarterbacks in Week 13.

12. Christian Wilkins’ frequent pressure Sunday wasn’t all it seemed to be

Despite a career-high five pressures Sunday, Christian Wilkins’ pass-rushing grade was a mere 62.0. But it shouldn’t come as a surprise, as three of Wilkins’ quarterback pressures were unblocked — meaning he had a straight shot at the signal-caller. In the end, his “win-rate” on pass-rush snaps was only 6.7%, ranking tied for 59th among qualifying interior defenders in Week 13.

13. Cameron Jordan and Marcus Davenport wreaked havoc vs. the Falcons

You’ll be hard-pressed to find a pass-rushing duo that could match Davenport and Jordan’s dominance on Thanksgiving. The pair combined for 15 quarterback pressures — 10 of which belonged to Jordan — and seven stops. For their efforts, Jordan and Davenport were ranked Nos. 1 and 2, respectively, in overall grade among qualifying edge defenders in Week 13.

Through the first nine weeks of the 2019 NFL season, Cooper Kupp racked 84 targets — 27 more than counterpart Robert Woods. But in the four weeks since, it’s been Woods who has seen the lion’s share of passes thrown his way. Goff has targeted Woods 34 times in that span compared to just 24 for Kupp.

15. Nick Bosa was shut down for the first time in his career

Bosa earned the lowest overall grade of his young career in the 49ers’ 20-17 loss to the Ravens on Sunday, failing to record a sack or quarterback hit for the first time. He did get on the board with a quarterback hurry early in the second quarter, but his overall performance yielded just a 49.5 pass-rushing grade — the lowest of his career so far.

17. Mike Gesicki is finally getting involved in the Dolphins’ offense

Gesicki struggled to get involved in the Dolphins’ offense in 2018, catching one or fewer passes in 11 of 16 games. This season has been a bit of a different story, particularly as of late. In the past five weeks, Gesicki is tied for fifth among tight ends in targets, with 30 coming his way. And after not having a touchdown catch all of last year and most of this year, Gesicki now has one in two straight outings.

18. Even the Saints’ cornerbacks were torching the Falcons’ pass-blocking

It’s safe to say the Falcons struggled to block last Thursday, let alone pick up blitzes. The Saints sent cornerbacks Chauncey Gardner-Johnson and PJ Williams on a combined 18 pass-rush snaps, and they racked up five pressures — finishing first and tied for second among at the position in Week 13.

19. Rookie safeties showed up in Week 13

Juan Thornhill, Taylor Rapp, Julian Love, Darnell Savage and Sheldrick Redwine all made their mark this past week, posting overall grades of 75.0 or higher. Thornhill notched an interception and allowed just 23 yards in coverage; Rapp had a pick and a pass breakup; Love had a stop and a forced fumble; Savage faced just one target and had one interception and Redwine had three run stops.

20. Anthony Miller separated with frequency against the Lions

In Week 13, Miller saw a career-high eight targets when he had a step or more of separation. He hauled in all of them for an impressive 130 yards, part of his career-best 140 receiving yards on the day. And to cap off his day, Miller earned an 86.5 overall grade, which — you guessed it — was another career-best.