Galina: How modern football has transformed the linebacker position

We are not so far away from applying a new designation to our nation's linebackers: endangered species.

There used to be three of them on the football field at all times: the Sam, the Mike and the Will. Now, the Sam has been replaced by his smaller and faster cousin, the Nickel. As offenses have spread out and used lighter and lighter sets, the need for three bulky, Terry Tate-type linebackers on the field at the same time has diminished. In 2020, only one-quarter of all defensive snaps were played with three linebackers on the field. That is the lowest rate in any of the 15 years of PFF data. 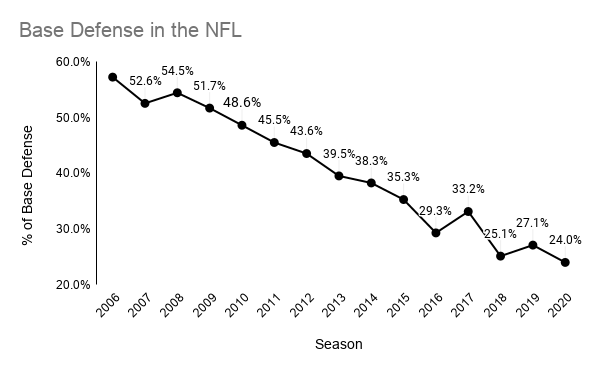 There has been a steep decline. Most teams don’t have a Sam linebacker who they can afford to play out in space against slot receivers. The Sam used to be the guy who lined up directly over tight ends and defeated blocks in close quarters, but that player is simply not needed as often in the modern NFL, so it became a Nickel player. That leaves us with two linebackers. So-called “Nickel” personnel — two linebackers and five defensive backs on the field — was the most common grouping in the NFL, as it was used 59% of the time last season, with the Bills leading the charge (89%).

We’re also in the midst of change in how defenses align and play coverage. In 2020, we saw the least amount of pre-snap one-high defenses in the NFL since we began charting it.

This was how the NFL looked for a long time, but change is here. We’re also seeing teams go into trips formations even more. That means the pre-snap picture in the NFL going forward might look more like this:

What does that mean for our precious linebackers? Their roles have changed significantly over the past few years, especially in the passing game. Their responsibilities have remained slightly constant in the run game, but the tools they have at their disposal to stop the run have changed.

In a modern two-high world, the Mike linebacker is a protected player in the passing game. Ten or more years ago, in the heyday of the Tampa 2 system, the Mike was responsible for a large area on the field, as he had to carry routes vertically down the middle of the field

The safeties had to split to help their cornerback friends out, which left the middle of the field to the Mike. NFL teams have gotten away from that defense in recent years. The New York Giants ran it the most in the league last season, at 23%. The league average was 10%. It’s not a base defense anymore, but rather more of a changeup. It also might not even work very well, as teams averaged 7.8 yards per attempt against Cover 2 last season, the highest against any coverage that we chart.

We’re seeing more quarters defenses, which means the safeties aren’t splitting as far or, in some cases, as deep and can help the Mike with any vertical routes. Against trips sets, the backside safety can use a “poach” technique and look for routes coming from the trips side from his backside alignment. That helps out the Mike.

These types of defenses allow the Mike to drop into a comfortable zone, usually called the “hook” area, pass off routes and then attack when the ball is thrown. Within this hook zone, different defenses can have different technical approaches.

For example, San Francisco 49ers All-Pro linebacker Fred Warner sits a bit shallow and can let routes go by him as he sorts through the passing concept. Robert Saleh, the 49ers' defensive coordinator from 2017 to 2020 and now the Jets' head coach, plays a more modern style of two-high with the safeties sitting relatively low. That means the underneath players don’t need to drop as deep.

In Minnesota, Mike Zimmer has All-Pro linebacker Eric Kendricks open up and get a little more depth to help out the Vikings' deeper-lying safeties. The lines between the deep zone defenders and the underneath zone defenders must be aligned.

Those are relatively minute details, but both cases show how the Mike can be protected by the safeties.

The Mike has had to become a better athlete to justify him being on the field because of the extraordinary athletes that offenses continue to trot out. And that trend will continue to become more apparent in the two-high future of the NFL. The space between the Mike and the other underneath players has widened.

There are four underneath zones in Cover 3, whereas there are only three in a quarters-type defense. Teams have tried to mitigate this by having their cornerbacks play a hybrid Cover 2 and Cover 4 technique, but the fact remains that there is a lot of room to attack between the underneath players. One of the ways we are going to see offenses attack the Mike specifically is with bubble screens.

With the Mike lined up over the No. 3 receiver when playing two-high coverages, the offense wants to force him to run laterally and be an athlete to stop these plays. In 2020, we saw the most screen throws to slot receivers than in any other season in the NFL’s history.

The Mike has to be able to run and tackle in space:

On the other side of the field is the Will linebacker, whose responsibilities are also changing because of the NFL’s move to two-high pre-snap looks. On the backside of trips formations, teams will often end up in man coverage on the isolated receiver and the running back, even in called zone coverages. If the weak safety is down pre-snap, he can handle the running back and the Will looks to the trips side to attach to any deep crossing route.

The Will covering a slot receiver from across the field is doable, but not every team has a player at the position who's capable of it. If the safeties line up in a two-high look, they can rotate in a weakside “buzz,” have the safety pick up this route from depth and let the Will handle the running back.

This is an important aspect of the Will linebacker's responsibility. He must be able to cover a running back man to man.

Still, like the Mike linebacker, the Will is protected in a two-high zone coverage world from having to carry anything vertically up the field because of the presence of a safety directly behind him. The difference is that the Will does not have the Nickel linebacker outside of him. Instead, his hook area can extend to the curl area — and even to the flat all the way to the sideline in some cases.

Against the run, the responsibilities remain somewhat constant from what we’ve seen over the years, as previously noted. How the players get there has changed, though. Teams aren’t asking their linebackers to be big, physical players who have to take on offensive linemen head-on to make plays.

Against run schemes with a pulling offensive lineman, fullback or tight end, defensive ends are now taught to crash and create more of a pile-up rather than the classic spill or box techniques where their job is to take out just one offensive player. They are trying to hit one player, knock him back and create a domino effect, whereby the next offensive blocker can’t have free access to the linebacker.

The linebackers are smaller and not built to defend the run with powerful techniques anymore, so defenses have allowed themselves some leeway with how they want their linebackers to play.

There are also the new “tite” fronts, where interior gaps are dominated by interior defensive linemen and linebackers flow easily and just track the ball, that a few teams have brought to the NFL level.

You can see the backside linebacker be able to flow to the front side but then chase the ball as it cuts back:

The tite front helps smaller, faster linebackers because the running back is often forced wide without a true interior open gap.

Linebackers have had to change more than any other position as modern football keeps eliminating their positions and telling the guys left on the field that their bodies must adapt or they will be gone, too.

We’re not quite at the tipping point where “dime” defenses — one linebacker on the field — are going to become the norm, as they made up only 13% of all snaps last season, but it does mean that the remaining two linebackers are continually burdened with making plays themselves.

Taking on blockers while finding the ball-carrier and covering tight ends and running back who themselves are becoming better and better receivers is not an easy job, but someone has to do it.