The Kansas City Chiefs once again found themselves trailing by double-digit points in the postseason, but this one felt different.

In their previous two games, they had been in their comfort zone in that scenario, but this time, the San Francisco 49ers' defense was harrying superstar quarterback Patrick Mahomes, and he was just looking a little “off.”

The Chiefs were in their no-huddle, hurry-up offense, the way they had been in their previous comebacks, but this time they were going up against one of the most formidable and oppressive pass-rushes in football, and it was changing the dynamic.

The 49ers were getting to Mahomes consistently, and even when he was able to get a pass away comfortably, his ball placement had been spotty. On 2nd-and-15, with the Chiefs trying to make it a one-score game, Mahomes threw to a wide-open Tyreek Hill, but the ball was low and underthrown, forcing Hill to go to ground to secure it. A challenge from Kyle Shanahan showed that he didn't, in fact, secure it without the aid of the ground, and now the Chiefs were staring at 3rd-and-15 across from a pass-rush that had already been killing them and were licking their lips and ready to attack.

As the teams lined up, Joe Buck put it best: “The Chiefs need some Mahomes magic.”

That Mahomes magic was something that had been largely absent from the game so far but was about to be rediscovered thanks to his most dangerous playmaker, Tyreek Hill, and a play call that can only be described as perfection.

This is the play that changed the game:

49ers D was getting to Mahomes. He looked off. They had just overturned the Hill catch bringing up 3rd and long. Pressure again, this time they burned it. pic.twitter.com/wDg4vhtUvl

As you can see, the pass-rush was once again closing fast. DeForest Buckner, in particular, was mere moments from getting to Mahomes, and Nick Bosa wasn't far behind, but the Chiefs quarterback has enough time to get the ball in the air and connect with Hill, who was wide open deep downfield. That connection put the Chiefs at the 49ers' 21-yard line with a new set of downs as opposed to forcing them into a likely punt from within their own territory with the clock ticking dangerously towards the end of the game. It dug them out of a significant hole and was the play that sparked the comeback. 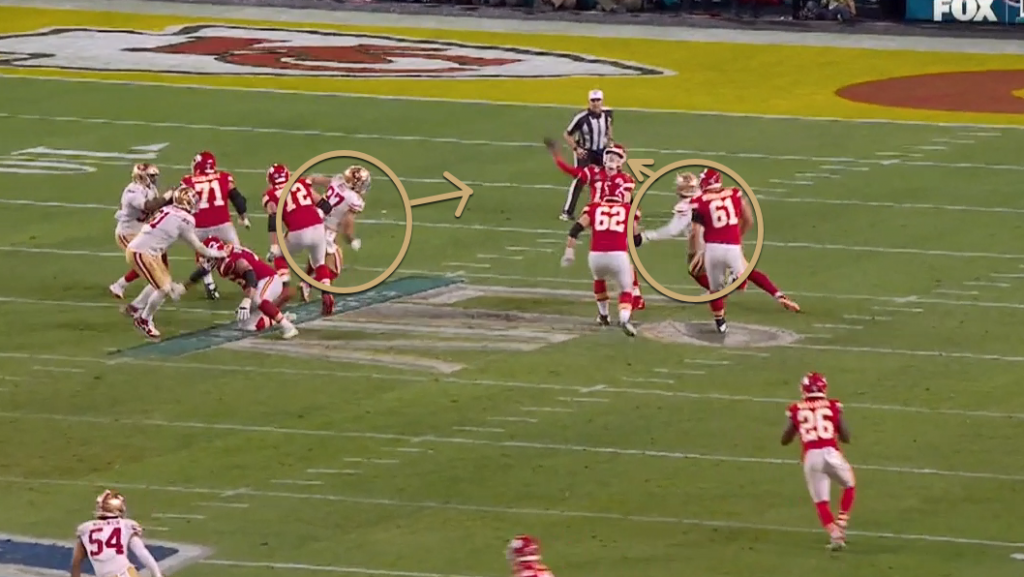 That Mahomes was able to stand and deliver in the face of that kind of pressure is impressive, but for a player used to making spectacular plays each week, it was more of a return to the norm. What makes this play is what happened to Hill, and the play design and the call itself.

As everybody knows, Tyreek Hill is one of the most dangerous playmakers in the game. He may be the fastest player in all of football, and that speed means that a defense is only ever one play away from a problem when covering him. Even the best cornerbacks in the game have been exposed for significant gains against a player as quick and explosive as he is, but that skill set can be deployed in a variety of different ways.

If Hill lines up out wide, the temptation is there for a defense to try and jam him at the line and disrupt his route. This can be an extremely effective tactic against him, but it becomes more of a high-wire act than against most receivers because if he defeats the jam, Hill has the speed to simply destroy the corner, and no makeup speed in the world can prevent the subsequent big play. Trying to get physical with Hill in press coverage is a major gamble that many teams aren't prepared to make. 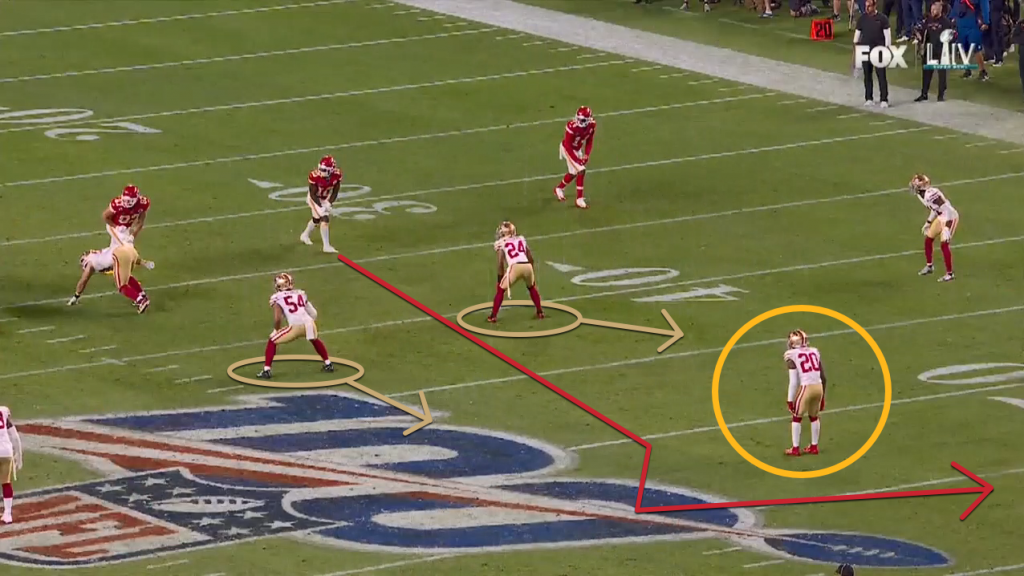 With this play in question being 3rd-and-15, the situation would have been an ugly one for any offense, but the play was designed beautifully to actually take advantage of the peculiarities of the disadvantageous circumstances. The 49ers were always going to play soft coverage, dropping defenders to the first-down marker and playing things in front of them, and while many teams would be drawn into targeting that space and hoping for yards after the catch, the Chiefs went a different route.

That soft coverage gave the fastest player in football a free release off the line with a clear path to run right at the safety in the middle of the field, putting the chance of the deep shot that they had been struggling to find right back on the table.

While slot corner K'Waun Williams and linebacker Fred Warner dropped to their landmarks, Hill sprinted past them into the middle of the field and attacked the leverage of the safety, Jimmie Ward. A deep-lying safety trying to deal with a vertical route that has a two-way go against him is always living on borrowed time, and against Tyreek Hill, it's nothing but a death sentence. As soon as Hill has threatened Ward's inside shoulder enough that Ward has to flip his hips, Hill breaks back outside into acres of space and waits for the ball to arrive for the biggest play of the game.

The play design was perfect for such a situation. The receiver outside of Hill,  Sammy Watkins, had frozen the cornerback at a shallow depth with an in-breaking dig route. While Emmanuel Moseley may have been designed to be in position to drop underneath Hill's route on the chalkboard, in practice, he was occupied by the route heading in the opposite direction at the depth of the first-down marker. In fact, he wasn't just occupied by it; he was manipulated to sprint away from the actual danger zone on the play.

We often hear about coaches saving their best plays for a critical moment in the game, and while that usually refers to an easier down-and-distance situation than this, Andy Reid dialed up the perfect play call on a play the Chiefs absolutely needed to have.

He actually leaned into the fact that they were facing an ugly situation for an offense, and he used that against the 49ers, knowing they would be playing soft coverage and focused intently on the first danger that presented itself at the first-down marker. That allowed him to attack them deep and hit the big play that his team had been missing. The fact that Patrick Mahomes was able to stand there with two rushers bearing down on him and deliver the pass is why these two are celebrating a Super Bowl victory thanks to executing one of the great comebacks in Super Bowl history.