Riske: Investigating athleticism and its effect on aging curves

Last year, we took an in-depth look at the learning curves for young players who join the NFL from college, and we followed that study with an investigation into the aging curves for veterans.

The general findings were that most tend to struggle during their rookie season, but the learning curve from Year 2 on is flat for many positions. Linemen stood out as the only exception, as we found that they often break out in Year 3 or even Year 4.

The positional differences were similar for aging curves, as linemen also decline a bit later than players at other positions. However, these are only averages across the different positions, and it’s evident that some players do not struggle as much as others with the transitions from college to pro and that some players decline later (and more gracefully) than others.

Naturally, those who can correctly identify the players who deviate from these general tendencies would be finding a considerable edge.

One thing that comes to mind as a confounder here is athleticism. So, the time has come for us to investigate whether plus athleticism helps with the transition from college to pro and leads to a flatter learning curve and how athleticism affects the aging curves.

In this article, we want to focus on the latter and consider aging curves based on athleticism.

To measure athleticism for players since 2006, we have to rely on NFL Scouting Combine results. Based on testing numbers, size, height and position, each combine participant is assigned a normalized athletic score that describes the overall athletic prowess of the player based on the information given to us via the combine.

Such an athletic score certainly carries a signal for whether a player becomes a good pro, as the correlation of athletic score to NFL performance (measured by the PFF WAR rank within the position) is a positive 0.17. But can it also help identify players with different aging curves?

We consider all players for whom we can measure aging: those who have established themselves as NFL players and thus have room for decline. As a loose definition, we look at all players who played at least 1,000 snaps before their age-27 season.

Among those players, the distribution of athletic scores looks like this: 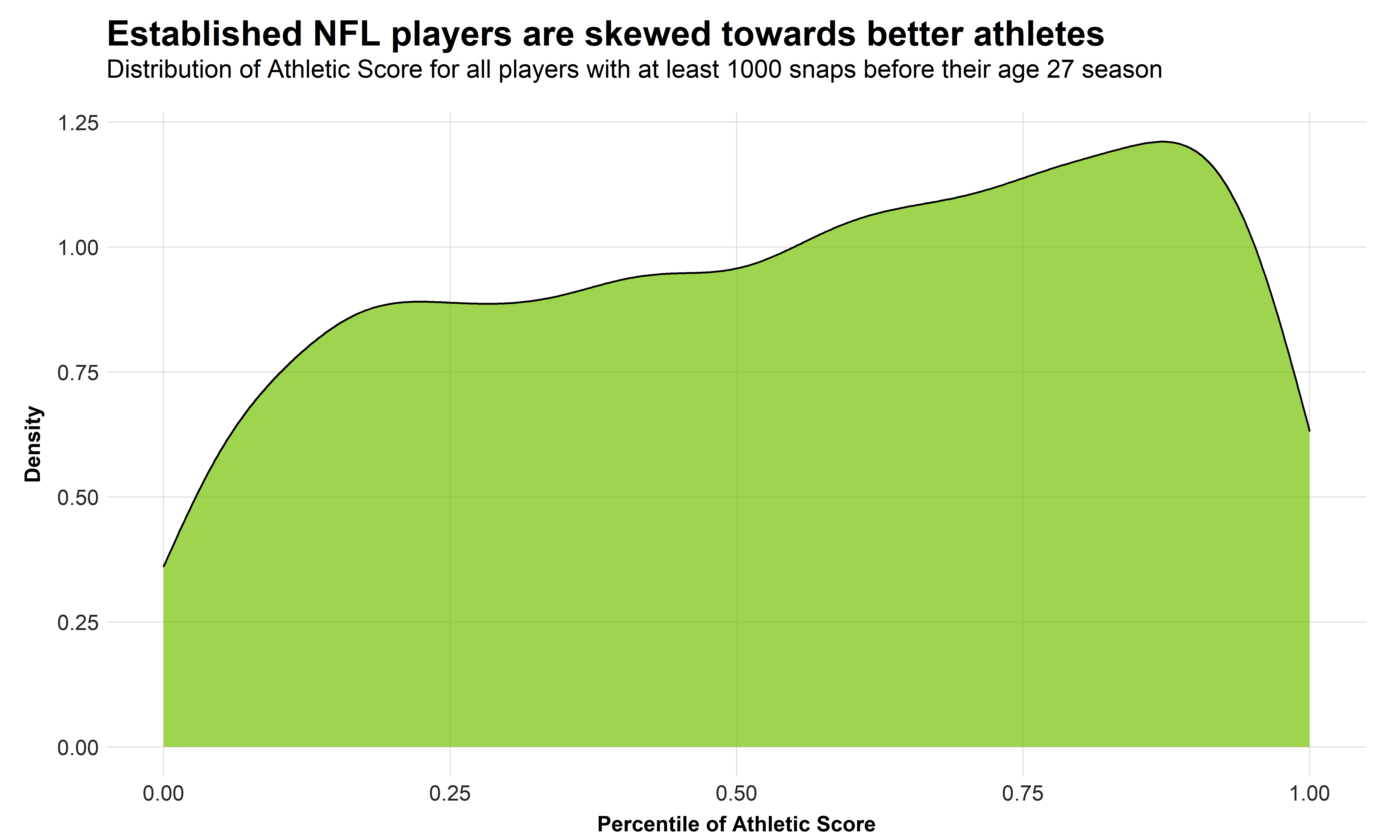 Unsurprisingly, established NFL players tend to be better athletes, as the distribution is skewed to the right. In particular, the median athlete among established players is a 57th-percentile athlete among all combine participants.