Riske: The trade for Carson Wentz was a mistake that could cost the Indianapolis Colts in the long run

Last Thursday, the Indianapolis Colts agreed to a trade with the Philadelphia Eagles that will send quarterback Carson Wentz to the Colts in exchange for a 2021 third-round pick and a 2022 conditional second-round pick. The latter will become a first-round pick if Wentz plays at least 75% of the Colts’ offensive snaps. If the Colts make the playoffs, this threshold will decrease to 70%.

The Colts were obviously going to be active on the quarterback market this offseason, as Jacob Eason, a former fourth-round pick with zero NFL snaps to his name, would have been the only quarterback under contract in Indianapolis for 2021. And while the trade provides the Colts with an experienced option at the game's most important position, I argue that spending the number of resources it took to acquire Wentz wasn’t their best option.

A third-round pick and a future second-round pick doesn’t sound like much, but we shouldn’t forget about the guaranteed salary the Colts took on with the trade. They will pay $25 million to Wentz in 2021 and at least another $15 million in 2022. And we will later see that there would have been alternatives available on the quarterback market that would have been substantially cheaper, especially when it comes to guarantees. In all, the Colts could have invested roughly $30 million less in guaranteed money, which translates to just a bit more than the surplus value of a first-round pick.

Speaking of first-round picks, there is a very good chance that Carson Wentz will play 75% of the snaps because the Colts don’t have a promising option to back him up. If Wentz plays roughly at an average level and has the Colts at a 6-6 record after 12 games, would they pull him to save the first-round pick?

The offseason would have provided a lot of alternatives

If we account for the full costs, we find that the Colts paid roughly a first, a second and a third-round pick more than they would have paid for players such as Cam Newton, Jameis Winston, Ryan Fitzpatrick, Andy Dalton or Marcus Mariota.

The first four will hit free agency come March 17, and their contract projections from our own Brad Spielberger are all below $10 million. Marcus Mariota would cost trade compensation, but certainly not as much as Wentz, and his price tag would be $11 million with no guarantees.

The following chart leverages Bayesian Updating, a method we regularly use to forecast the distribution of outcomes for quarterbacks and one that allowed us to beat the market when it came to Aaron Rodgers’ MVP Award this year, to visualize the estimated outcomes for the six quarterbacks in question. We can see that Carson Wentz projects to be a below-average starter and doesn’t separate from the other five options in a positive way. 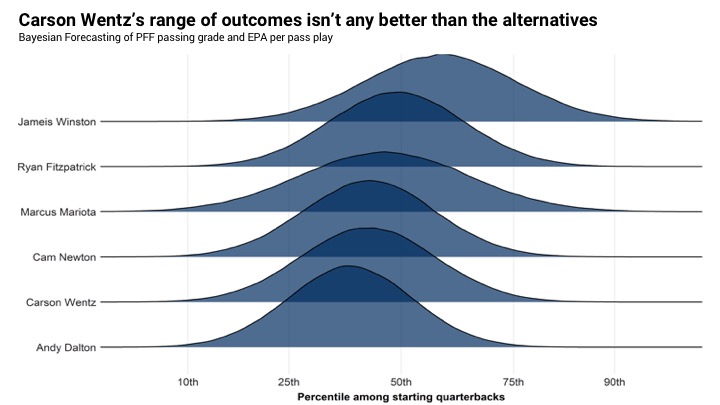 And yet, the Colts chose to invest a significant amount of draft capital to pick Carson Wentz out of these options, a decision that is very hard to justify in a vacuum.