The Indianapolis Colts have reached an agreement on an extension with a third member of their 2018 Draft class, as running back Nyheim Hines signed a three-year, $18.6 million extension with $12 million guaranteed.

The Colts and RB Nyheim Hines agreed to terms on a three-year, $18.6 million contract extension with $12 million guaranteed, according to his agents @ed_waz and @J_App10.

Hines expands the market set by Los Angeles Chargers running back Austin Ekeler, narrowly edging out the $6.125 million per year average on Ekeler's deal signed in 2020. Hines getting 64.5% of the total new money guaranteed is very strong. 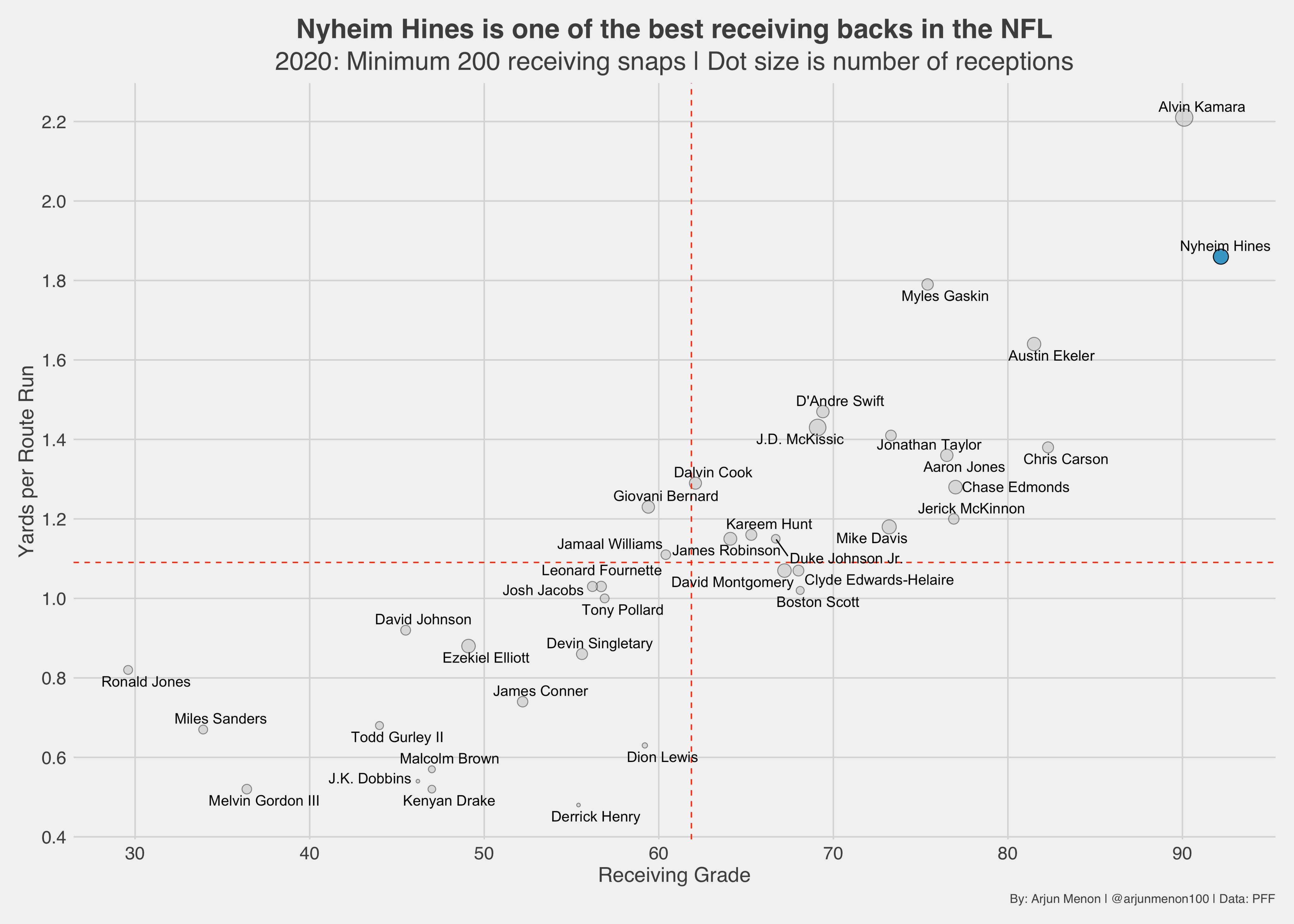 Hines has also been a dynamic special teams contributor when called upon over his career, earning the No. 1 punt return grade since he was drafted in 2018 by a wide margin. Hines’ 91.4 grade is over six points better than the next closest returner, and his 14.9 average yards per return rank first since 2018.

Consistency is key: Hines earned a career-high 82.4 PFF grade in 2020. The fourth-year NC State product has never earned a grade below 63.3 (2019) in his NFL career. Click here to find PFF's NFL player grades.

Dual-threat who can make big plays: Hines also recorded career highs in yards per carry (4.3) and yards per route run (1.73) in 2020. He’s recorded 40-plus receptions and 300-plus receiving yards in each of his three seasons in Indy. Hines logged 19 runs of 10-plus yards in 2020, 11 more than any other season in his career. Click here to find PFF's NFL premium stats.

Hines will remain a fixture in Colts offense: He just got paid like one of the premier players at the position – his $6.2M average per year ranks 11th highest among all running backs. The Colts signing him to lucrative contract extension means that they plan to heavily feature him as a key weapon in their offense. Fantasy projections have him at 54 targets, 43 catches, and 320 yards this season.

Strong flex option: Though he does not have much rushing utility, the Colts receiving dynamo is a weekly flex option with spike potential. Bump up projections for Hines whenever the Colts face a favorable strength of schedule matchup and are forced to air it out.

Jonathan Taylor‘s bell-cow dreams are over: The star running back will be the team’s featured runner, but he will not be a major factor in the passing game. Taylor ranks as the overall RB9 in PFF’s Week 1 consensus fantasy rankings.

Colts Week 1 spread correction: After opening as 2.5-point favorites, the spread completely flipped for the Colts, who now sit as three-point dogs. The latest movement has dried up any value remaining on the spread based on PFF Greenline's projections. Expect a higher scoring game than the market total, with the Colts' offense the key to this game going over. PFF's Betting Futures Tool reveals betting opportunities within season win total and future markets.