Ranking NFL head coaches from an analytics perspective is a Sisyphean task for one simple reason: It's easy to win games with good players. Barring a calamity or an incredibly poor surrounding roster, most competent NFL coaches would still manage to be competitive for a playoff spot with Patrick Mahomes as their starting quarterback.

Using this idea in ranking the current NFL head coaches, we try to do two things: 1) properly account for a team’s talent level, and 2) predict something less volatile than wins. We do this by creating a multilevel model where the fixed effects are the salaries of each starter on both sides of the ball, including an indicator for if the player is a rookie, and the target is points scored or allowed in a season. A starter is defined as the player who took the most snaps at their position, filtering out key injuries. This was altered for several positions, such as the top three players being considered for wide receiver, cornerback, safety and linebacker, as well as the top two players qualifying for guard, tackle, edge and interior defender.

The coaches are the random effect, giving us an estimate for their contribution to points scored or allowed. We can then use Pythagorean wins to estimate how many games the coach would win with an average team, defined as a team scoring and allowing 348 points in a season. This was the average mark for all teams between the 2017-2021 seasons.

It is important to note that using salaries as a percentage of the cap as an approximation for player talent creates issues where a particular starter is under- or overpaid. This is particularly relevant for quarterbacks who are still on their rookie contracts.

NOTE: This ranking does not consider results from prior to 2011 and does not include first-time head coaches, since success as a coordinator does not necessarily translate to success as a head coach. Thus, Josh McDaniels, Brian Daboll, Matt Eberflus, Nathaniel Hackett, Mike McDaniel and Kevin O'Connell are not included. 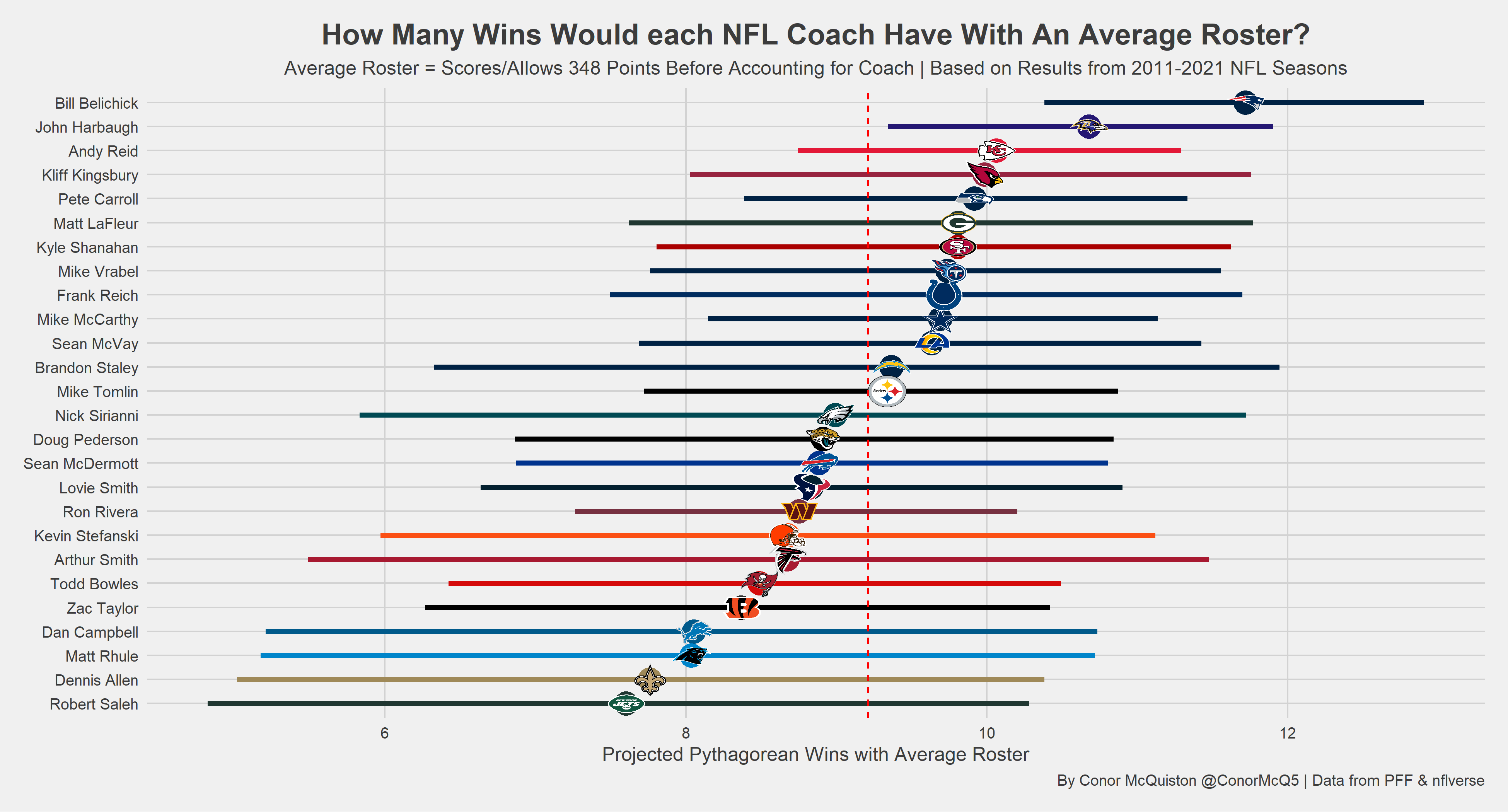 These coaches are set to one day admire their busts in Canton. All have enjoyed success for at least a decade, won at least one Super Bowl and played in multiple conference championships. There is room for debate as to their exact ordering and the exact approximations of their effects, but their accomplishments and longevity speak for themselves.

Bill Belichick is the best head coach in NFL history. Moving on…

Harbaugh’s head coaching career includes many iterations of offenses helmed by the typically solid yet unspectacular Joe Flacco that generally lacked upper-echelon talent. Despite this, the Ravens have always fielded above-average offenses — and tremendous defenses.

One of the best offensive minds in the league for over two decades, Reid comes in at the bottom of this Hall of Fame tier. This is mostly due to his defenses, which are usually not much to complain about, but that does knock him when compared to the best of the best.

Many of these coaches are either rising stars or have had comfortable amounts of success in their careers at the helm. In any given year, the teams they coach will likely be in the playoffs, although they generally either struggle on one side of the ball or simply haven't sustained their success over time.

Outside of quarterback Kyler Murray and wide receiver DeAndre Hopkins, Kingsbury has not had much to work with in terms of offensive talent in the desert, yet he's still managed to make the offense hum. Unfortunately, Kingsbury has left much to be desired on the defensive side of the ball thus far.

While Carroll’s tenure in Seattle will certainly be defined by the Legion of Boom years, it is worth appreciating that the Seahawks have managed to field solid defenses for the better part of a decade. His tenure will also be defined by the “Let Russ Cook” movement, which advocated for giving now-Broncos quarterback Russell Wilson more opportunities to shine amid Carroll's noted reliance on the running game.

Despite having future Hall of Famer Aaron Rodgers at the helm, LaFleur has still managed to elevate the Packers' offense while maintaining strong defenses during his entire stay in Green Bay.

Shanahan has been publicly lauded for impressive offensive outputs despite middling passers running his offense, and this is borne out in the data, as well. Unfortunately, his overall mediocre defensive outputs considering the talent at his disposal has been captured, too.

Vrabel is at times maligned for his reliance on the running game and star running back Derrick Henry, but the results suggest that it works on the macro level. The performance of his offensive units has actually been his calling card, as he's been a part of only average defensive results.

Reich has dealt with an unfortunate revolving door of passers Indianapolis but has maintained strong levels of offensive success in spite of that. His maintenance of a solid defense has also helped weather the storm of sometimes erratic play from his passers.

While there were criticisms of McCarthy's play calling in Green Bay — he doesn't call plays in Dallas — he has had no issue helming prolific offenses throughout his career. His Achilles heel, however, is his seeming inability to oversee defensive performances that live up to his teams’ talent level.

The data suggests that McVay lives up to his reputation as a fantastic offensive play-caller, as he’s overseen great offenses in his time as the Rams' head coach.

The former defensive coordinator has done a strong job embracing analytical ideas and done a respectable job overseeing strong offensive outputs. However, for his success to continue, his defensive output will need to follow suit.

If this list were to consider how well a coach manages a team off the gridiron, Tomlin would undoubtedly be in the top tier. His defenses have been consistently strong, but he suffers in these rankings due to having one of the highest-paid quarterbacks in the NFL throughout his head coach tenure lead his offense without consistently elite results.

Some of these coaches have seen their fair share of postseason success, and Doug Pederson has won a Super Bowl. Despite this, they can still falter and fail to see above-average results on either side of the ball, which eventually shows up in the win column. This group is also saturated with early-tenure coaches who have a wide range of outcomes looking into the future.

While Sirianni received deserved praise for how he adjusted to quarterback Jalen Hurts’ limitations throughout the 2021 season, his results were average in his first year as an NFL head coach.

Pederson’s final years in Philadelphia in some ways were a result of Carson Wentz’s fall from grace, but his subpar offensive rank here suggests he carries blame, as well. His ability to oversee good defenses, however, is a welcome sight in Jacksonville.

McDermott sticks true to his roots as a former defensive coordinator, helming strong units on that side of the ball while not always getting expected results out of his offenses based on talent level.

Smith is perhaps the largest approximation on this list, considering he has not been the head coach of an NFL team since 2015. Based on his prior results, though, he lives up to his reputation as a defensive mind — although it remains to be seen if his Cover 2-heavy style will still hold up in today’s NFL.

Despite Rivera learning as a defensive coordinator early in his coaching career, his defensive success as a head coach appears to be largely the product of his teams’ talent levels. Determining how much of a part he played in developing that talent is outside of this article’s scope.

Stefanski has overseen only middling offensive results, and his teams have underperformed on the defensive side of the ball considering their immense talent.

While Atlanta as a whole struggled in Smith's first season at the helm, his performance is estimated to be generally unremarkable.

By the data, it is difficult to call Taylor’s regime in Cincinnati a success despite his postseason resume. The estimate suggests that Taylor is riding off the high of the tremendous amount of talent the Bengals have amassed in recent years.

While Campbell is just one season into his head coaching tenure with a roster lacking talent, it is difficult to have an optimistic view of his performance. It is worth noting that quarterback Jared Goff underperforming relative to his contract may be depressing Campbell's offensive results.

Rhule has overseen some solid defensive performances during his time in Carolina, but his offensive results have been nothing less than putrid considering the Panthers' talent.

The data suggests Allen is one of the best defensive minds in football, making New Orleans' decision to promote him internally a sensible one. However, his offensive results in Oakland from 2012-2014 aren't cause for much optimism.

Saleh’s Jets did struggle in his first season as a head coach, but injuries and a roster lacking in talent across the board mean that his impact estimate is likely lower than it should be.