How often do NFL free agents actually finish out their contracts?

The Buffalo Bills recently signed 33-year-old pass rusher Von Miller to a six-year, $120 million contract on its face. At a position considered to be most reliant on athleticism, it seems absurd that an NFL team would plan on having a player in his age-39 season more than a half-decade in advance. It's so absurd that it's not at all what the Bills are doing — later details of the contract revealed that it has an out after three seasons.

In the world of the NFL's hard salary cap and largely unguaranteed contracts, this is a common occurrence. Thanks to accurate resources such as Over The Cap, it is simple to look at any player's contract and determine when the guaranteed money runs out, and thus when that player is likely to be cut or extended. It can be a tedious process for the average fan to break down contracts, though.

So this leaves us with a simple question: Without looking at contract details, how long can we expect a player to stay on their contract?

We will answer this question by looking at every unrestricted free agent signing from the 2013-2021 offseasons whose final contract year was on or before 2021. This gives us a substantial sample of 863 signings.

We'll start by answering a simple, straightforward question: Based on how long a free agent's contract is, how often do they reach the end of that contract? A quick semantic note: “End of that contract” does not refer to playing out the contract without receiving an extension but, rather, how often that player stays with a team for at least the length of the contract. Meaning, if a player signed a three-year contract, signed an extension at the end of Year 2 and ended up staying with the team for four years, then we will count that as “completing” the contract. 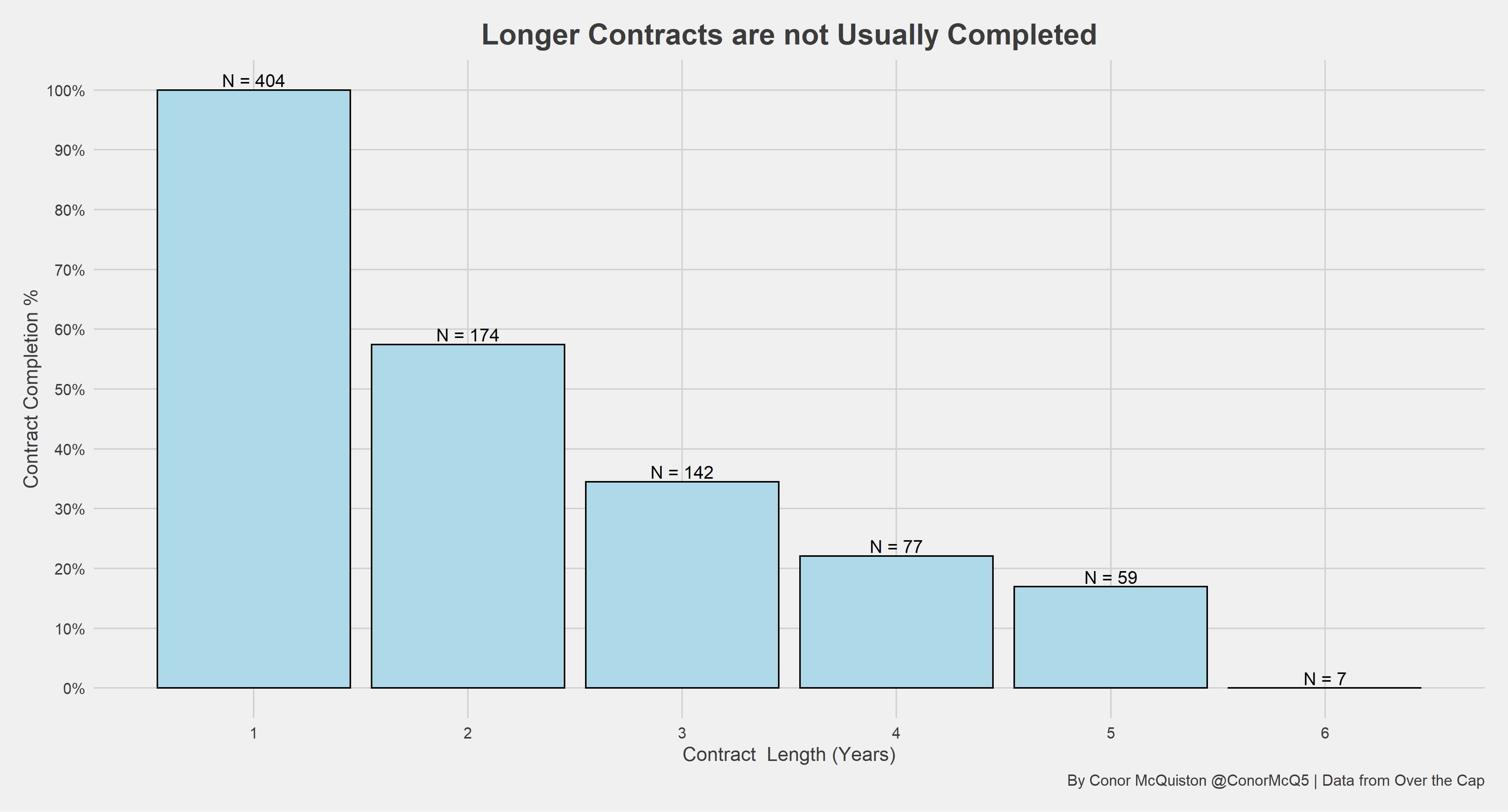 Another note: This does not account for midseason cuts, hence explaining why 100% of one-year contracts are considered completed. The overall trend, however, is not terribly surprising. The longer a contract is, the less likely it is that contract will be completed.

Although there are very few six-year contracts in our dataset, none have been completed. Since a basic means of cap manipulation NFL teams employ is front-loading contracts and spreading out the remaining money over several years, we can safely conclude that these sorts of long contracts are generally not made with the intention of retaining a player for six full seasons. 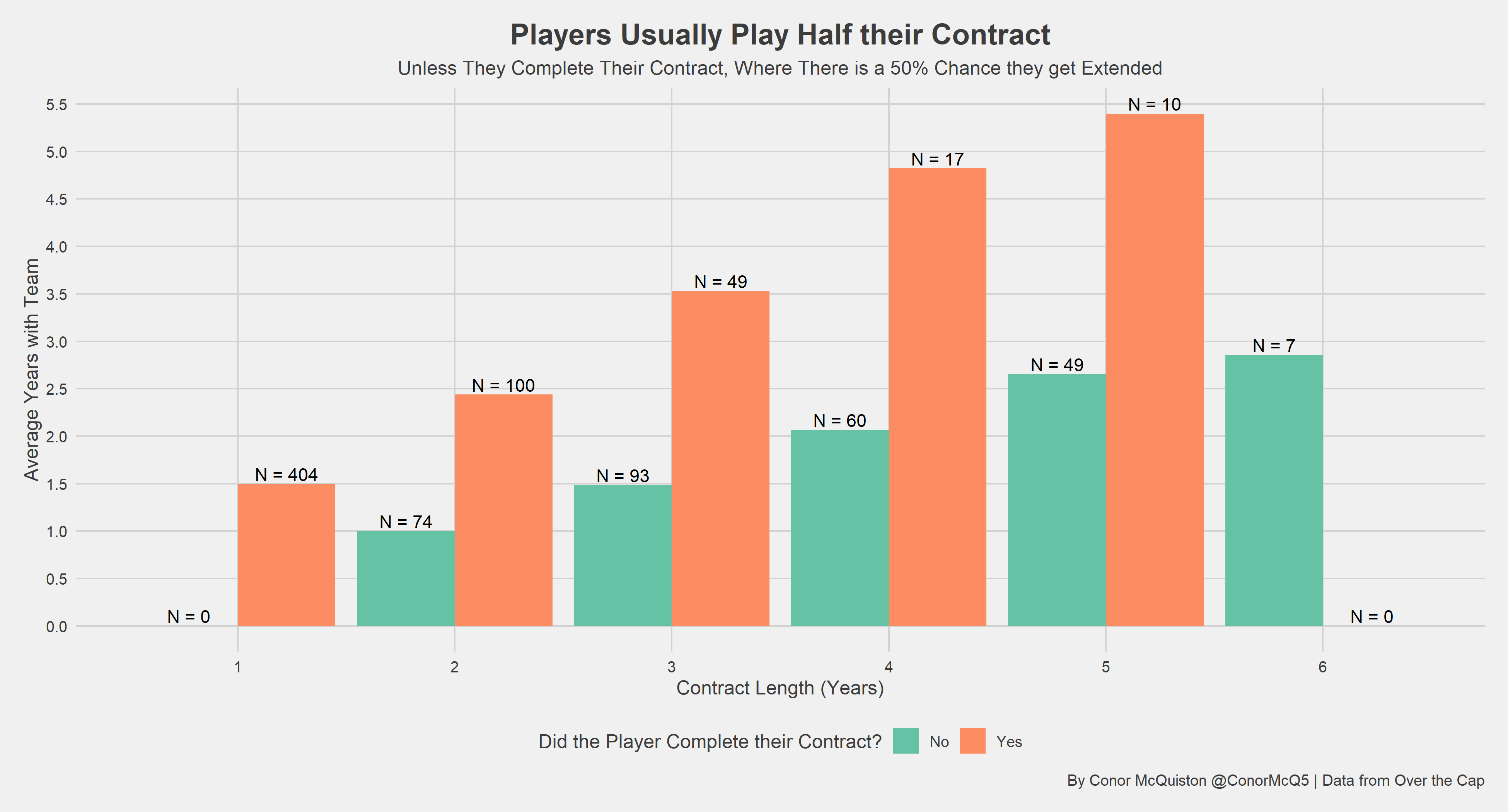 There are two clear trends we observe from this plot. If a player does not complete their contract, they are probably staying around for roughly half of its on-paper length. This is less clear with six-year contracts, in particular, due to the small sample size. If a player completes their contract, they stay on the team for an extra 0.5 years on average. This is a result of roughly half of all players who complete their contract completing it and moving on, and the other half getting extended. A majority of those extensions are one-year extensions, hence why it amounts to an extra 0.5 years in the aggregate.

With this information, we now have a simple approach to approximate how long a player will stay with a team without looking at their contract: predict the probability of a player completing their contract and build an expected value. For our purposes, we'll look at the two pieces of information we found to have predictive power:

Several other factors, notably draft position and position, were investigated, but there was no significant impact on predicting if a player would complete their free agency contract. 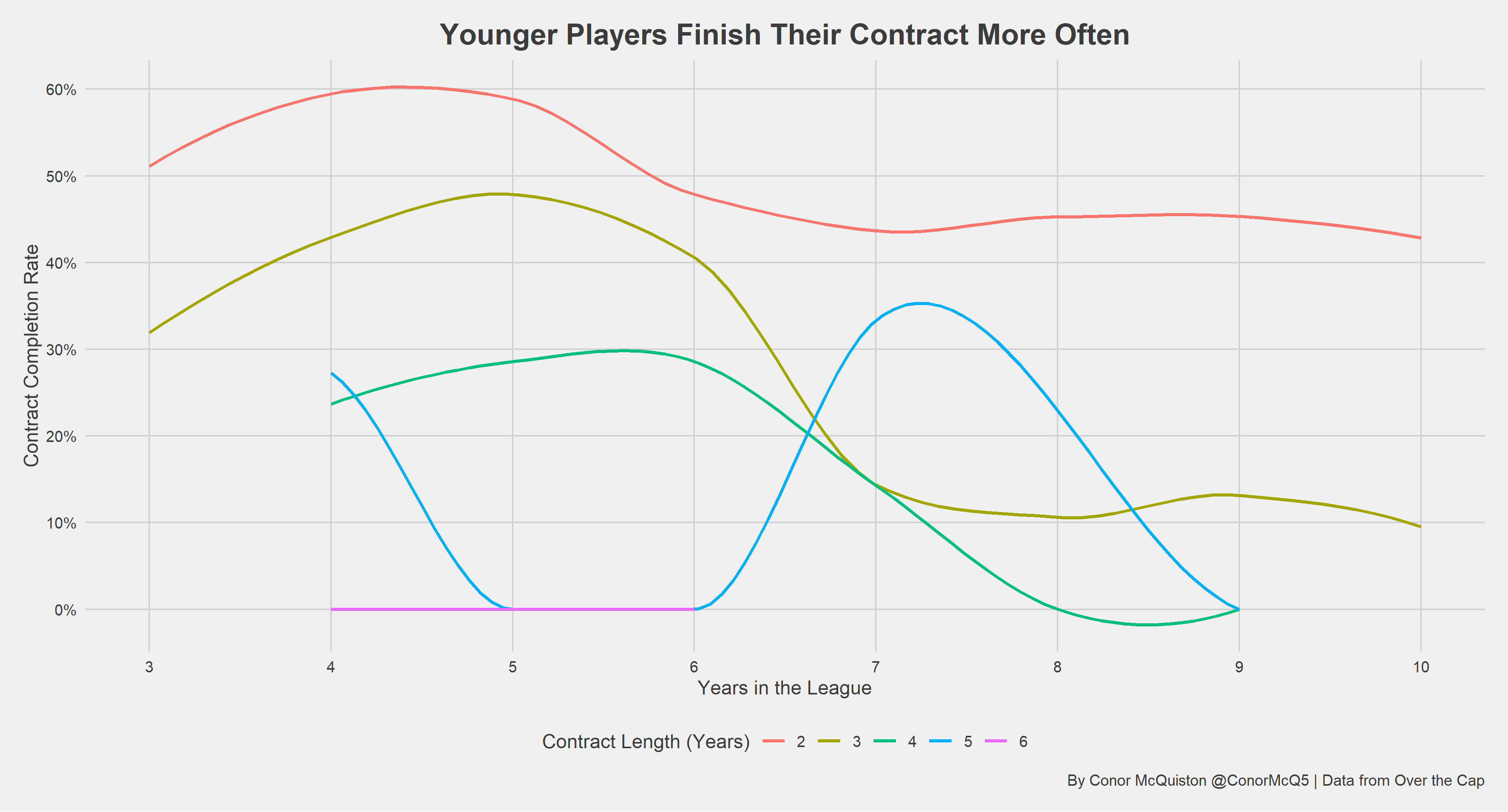 Looking directly at age would be preferred, but given the difficulty of acquiring that information on a large scale and how collinear experience is with age, this works just fine. Unsurprisingly, younger, less experienced players have a higher probability of seeing the end of their contract than older players — regardless of contract length. This makes sense — if a younger player outperforms their contract, the team would be more willing to accept a cap hit or give an extension to a player with more potential upside. 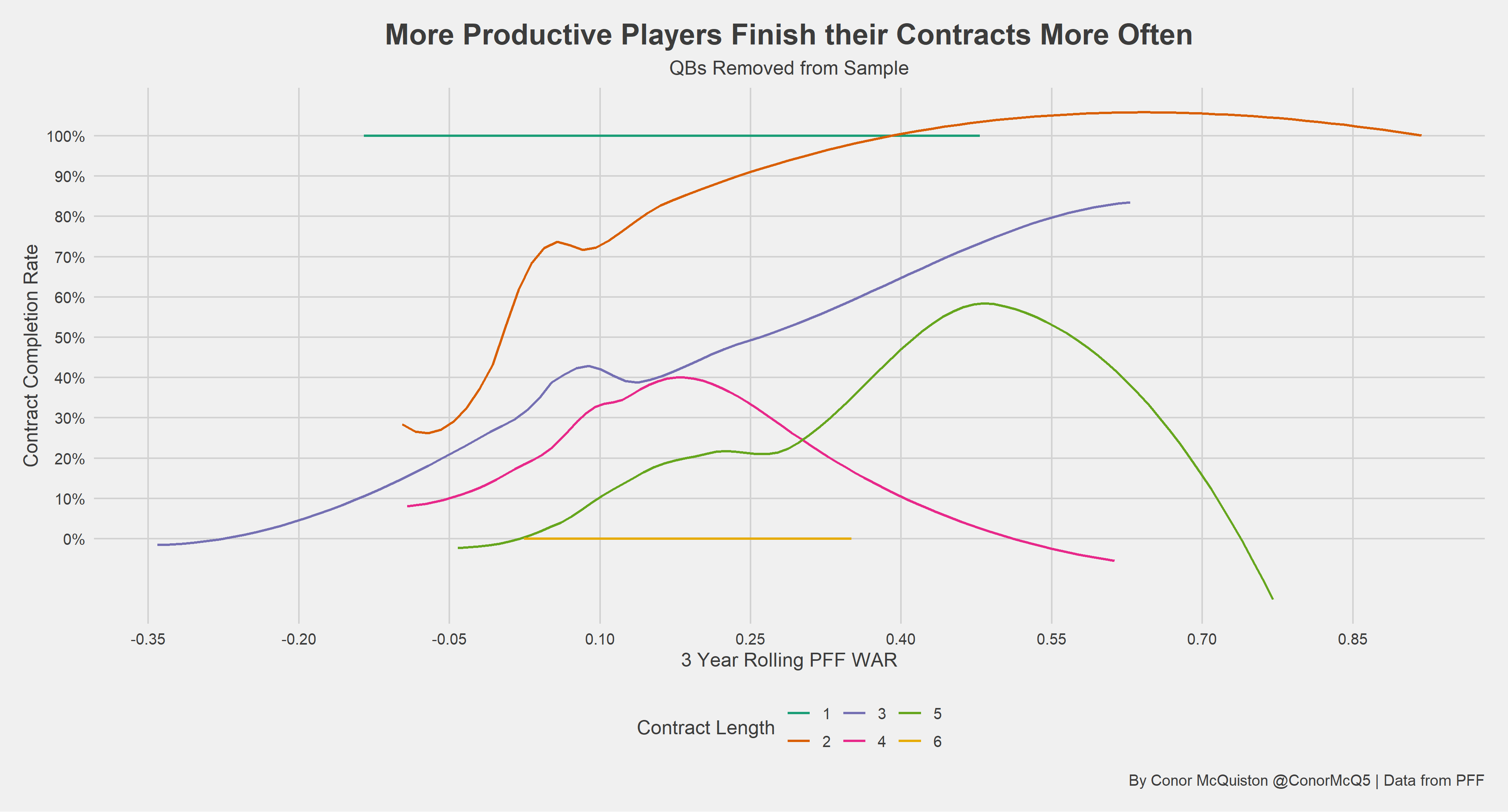 Since we are using PFF WAR on a three-year rolling average to evaluate a player’s overall production, quarterbacks have been omitted from this section because they are such extreme outliers in this metric. Once they are removed, the obvious solution is clear. Players who were more productive in their three seasons prior to signing are more likely to complete their contract than players who were less productive. This is chalked up to two main reasons: either that they are simply better and thus more likely for their team to keep them around for longer, or that teams are more willing to accept a formerly productive player to be slow out of the gate.

Using these insights, we can now build a simple logistic regression model to predict the chance that the top 2022 free agents will complete their contracts, and thus how long fans can expect they will be on their teams. 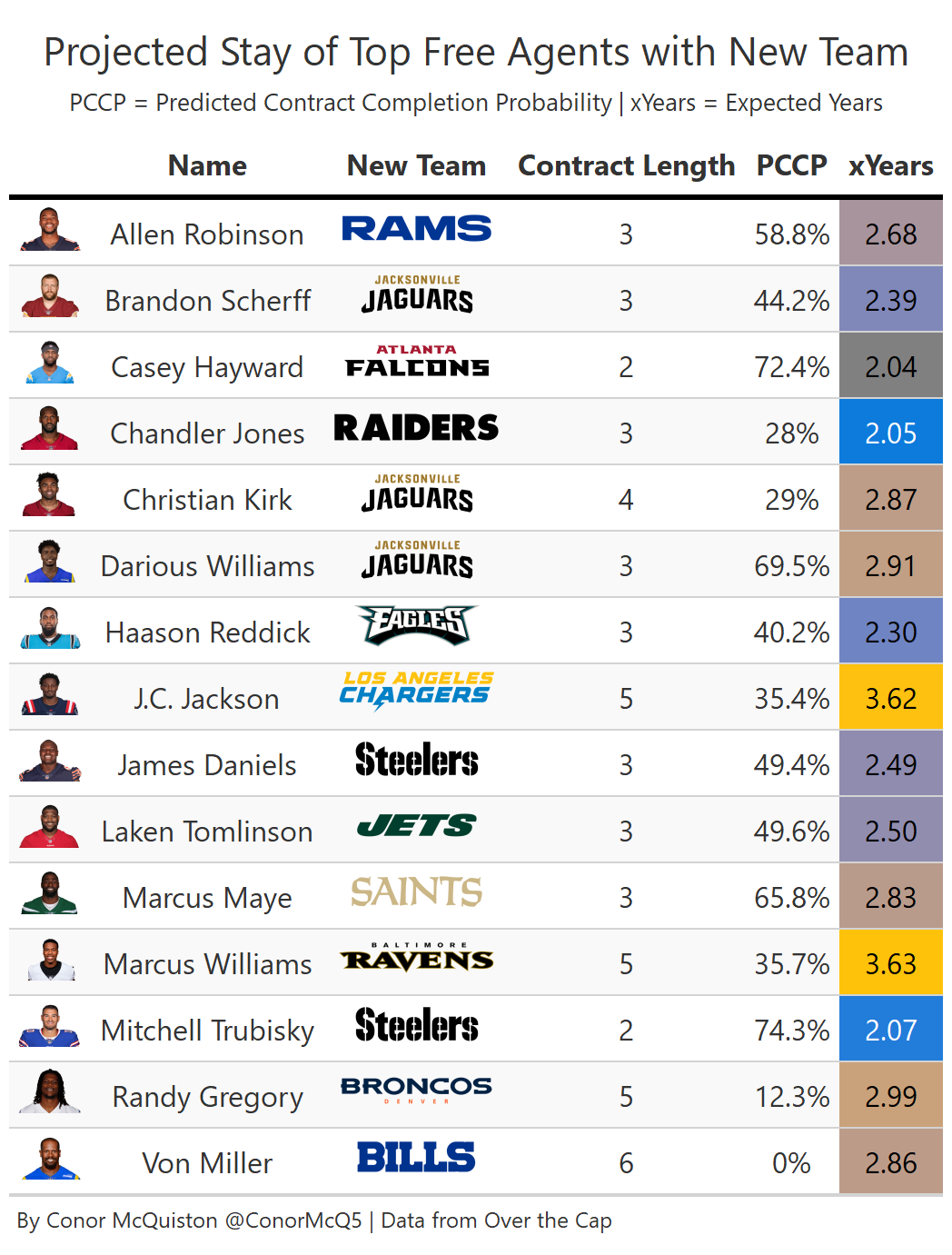