Examining whether drops should be attributed to receivers or quarterbacks

Drops are a nightmare for both NFL offenses and NFL fans. They stall offensive drives and provoke frustration for those watching at home. And just like any mistake in football, they're something a team has to overcome to win games.

Quarterbacks may throw a very accurate ball, but it is ultimately up to the receivers to reel it in. We have already found drops to not be consistent or sticky (no pun intended) from year to year for receivers.

But could quarterbacks be most at fault for drops? Quarterbacks are believed to throw catchable balls more often than not. Thus, using PFF data, we can measure if drops are more on the receiver, given that a majority of their targets are accurate and deemed to be catchable, or on the quarterback.

Take Los Angeles Chargers quarterback Justin Herbert, for example. His receiving group (including tight ends and running backs) leads the league in dropped passes (29 through 12 weeks). Herbert has a cannon for an arm. Just like we at PFF found pressures are a quarterback stat, scenarios like Herbert’s make one wonder: Are drops a quarterback stat or a receiver stat? Do big-armed quarterbacks like Herbert suffer from drops more often than other signal-callers, and is it their fault?

To check this, we first need to establish the important variables. For every passing play in every game, PFF analysts chart whether a quarterback was accurate, as well as the type of separation a receiver generates. From there, we can add in the down and air yards on the given play. We then throw this in a logistic regression model to predict how likely a drop is. After applying the drop rate over expected (DROE) to both quarterbacks and receivers, we can see which position group has a better correlation year over year, as well as the players at the top and bottom of this metric in 2021.

Let’s start with the quarterbacks. 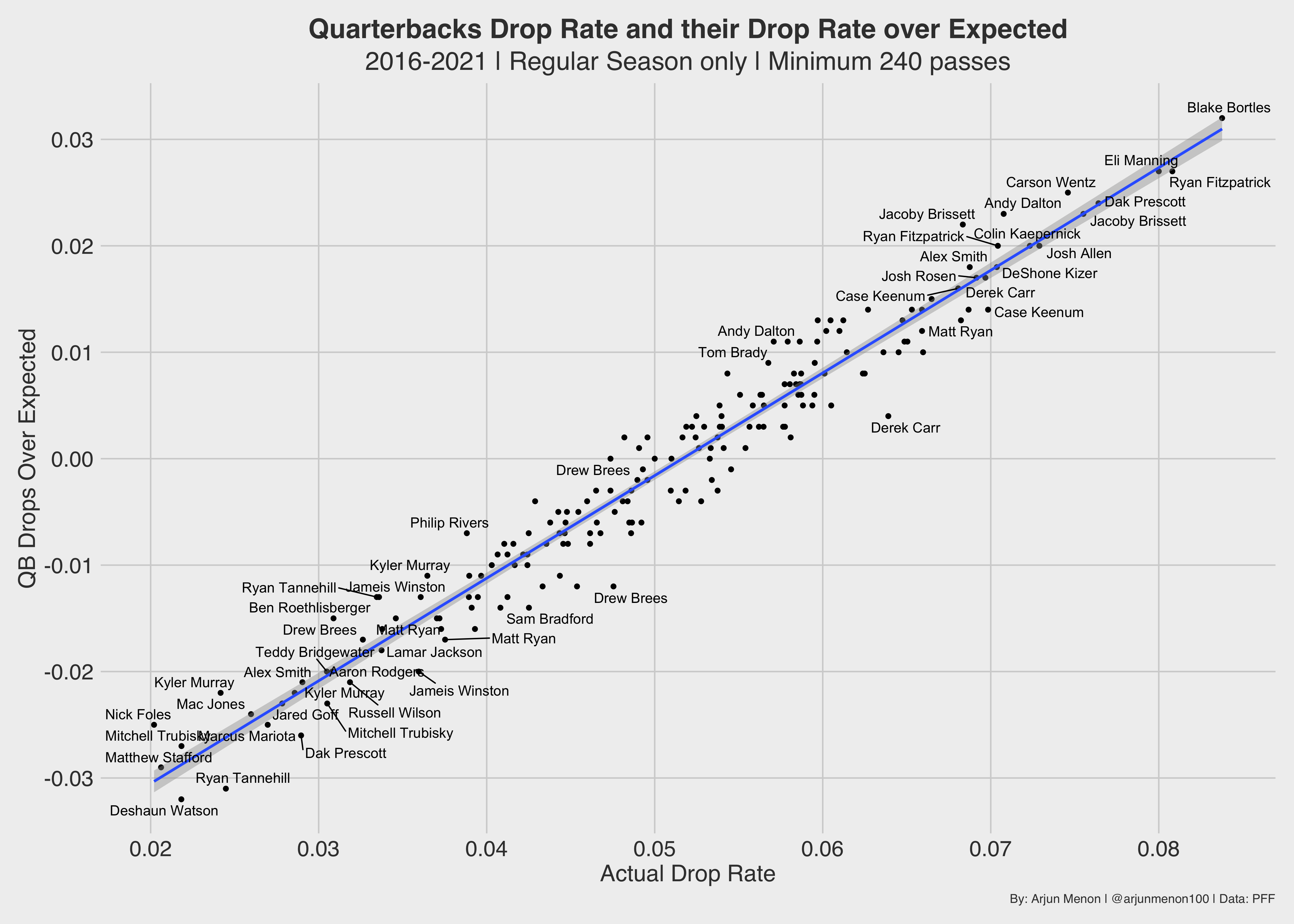 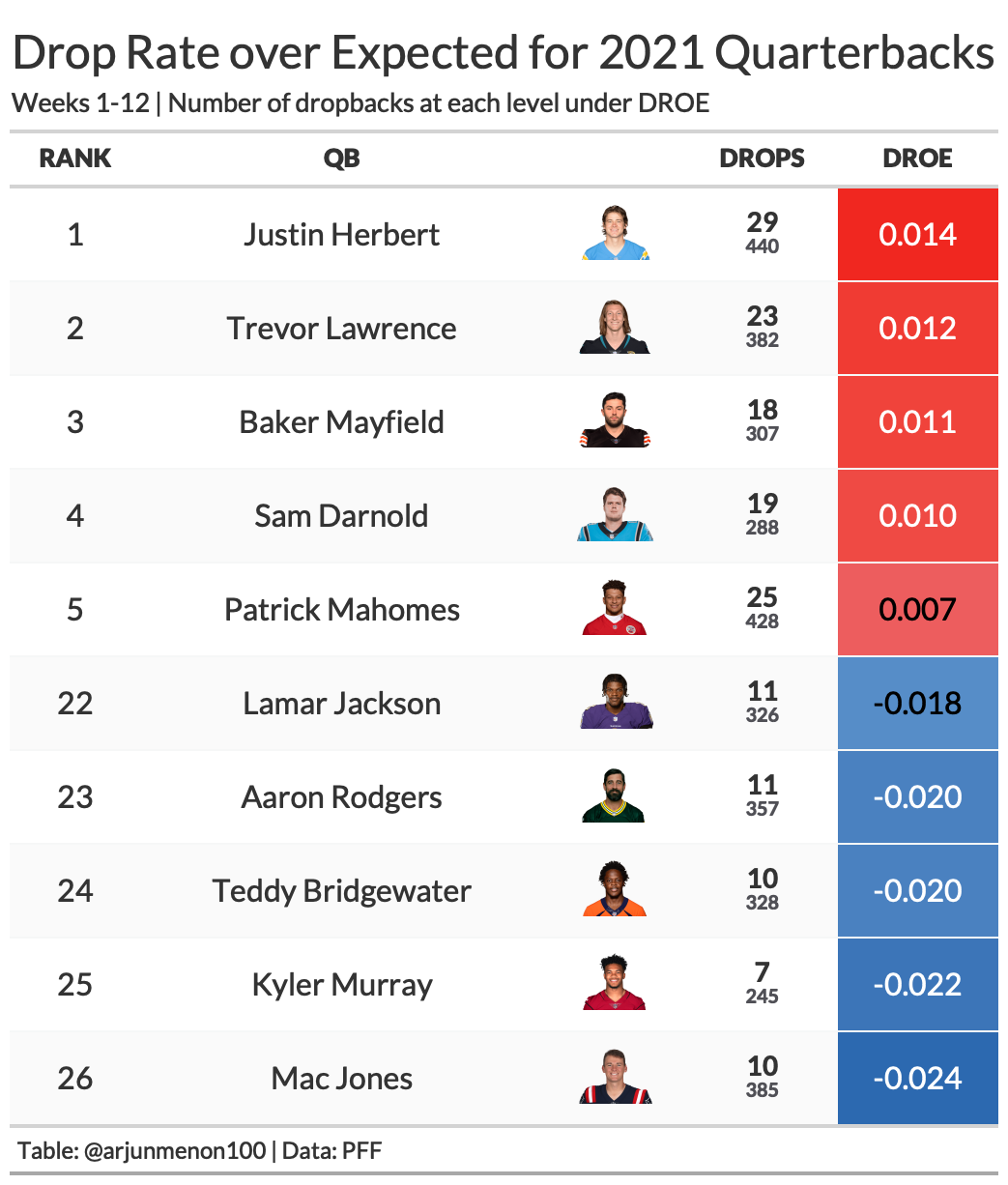 When looking at 2021 quarterbacks, no one has had a higher rate of passes dropped over expected than Herbert. On the flip side, Mac Jones’ passes have been dropped less than expected. It’s interesting to note that the two are polar opposites. Herbert has a big arm with a lot more velocity, whereas Jones has better touch on his throws and can be easier to catch passes from. 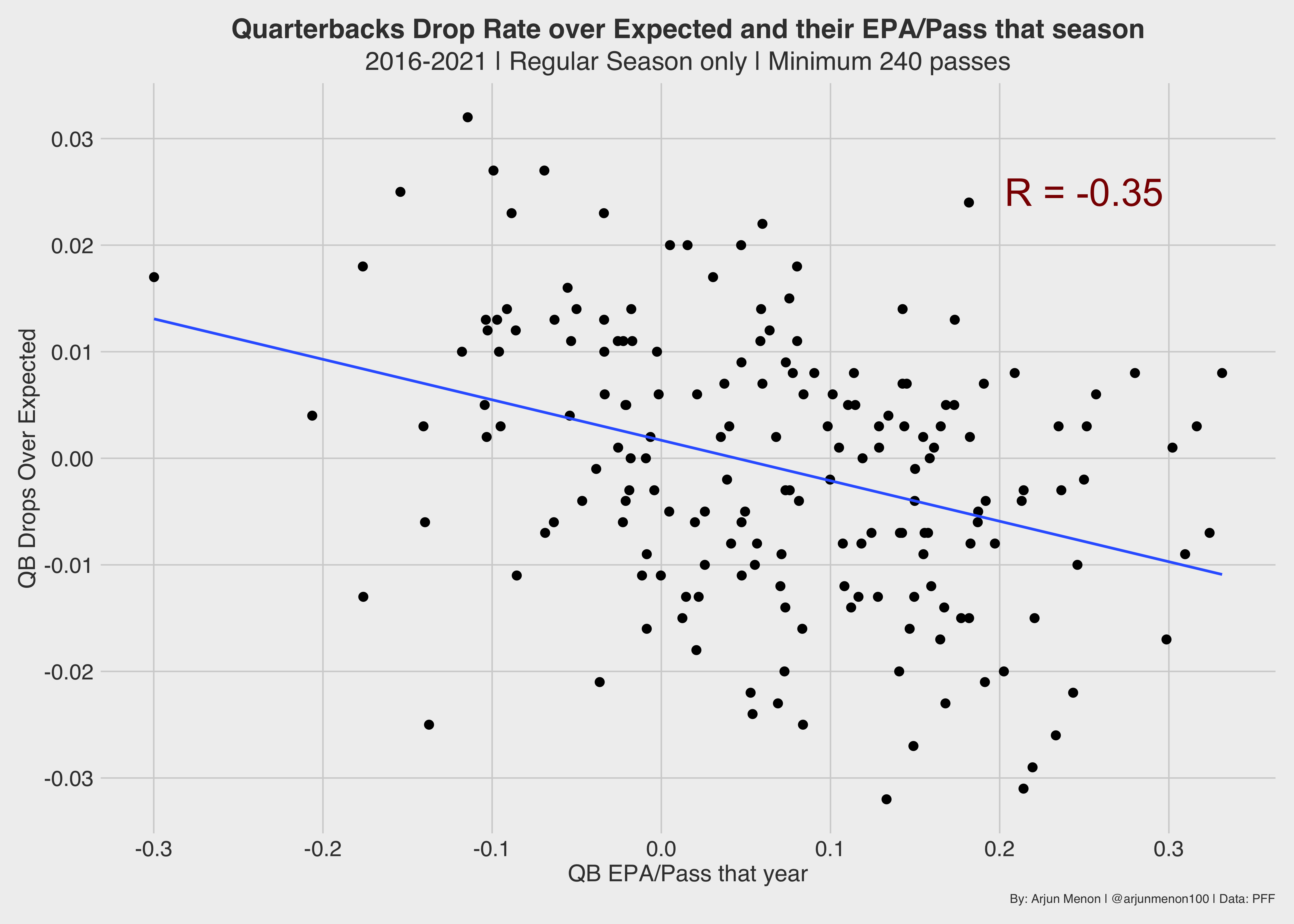 The final thing to investigate for quarterbacks is if this is important or not. We can check if drops over expected have a correlation to their expected points added (EPA) per pass for that given season.

There is a relatively strong negative correlation between the two variables. This shows that good quarterbacks suffer from fewer drops. Now, given that drops occur less than 8% of the time in most cases, the chance that they substantially bring down a quarterback's EPA per pass figure is unlikely.

Now onto the receivers. 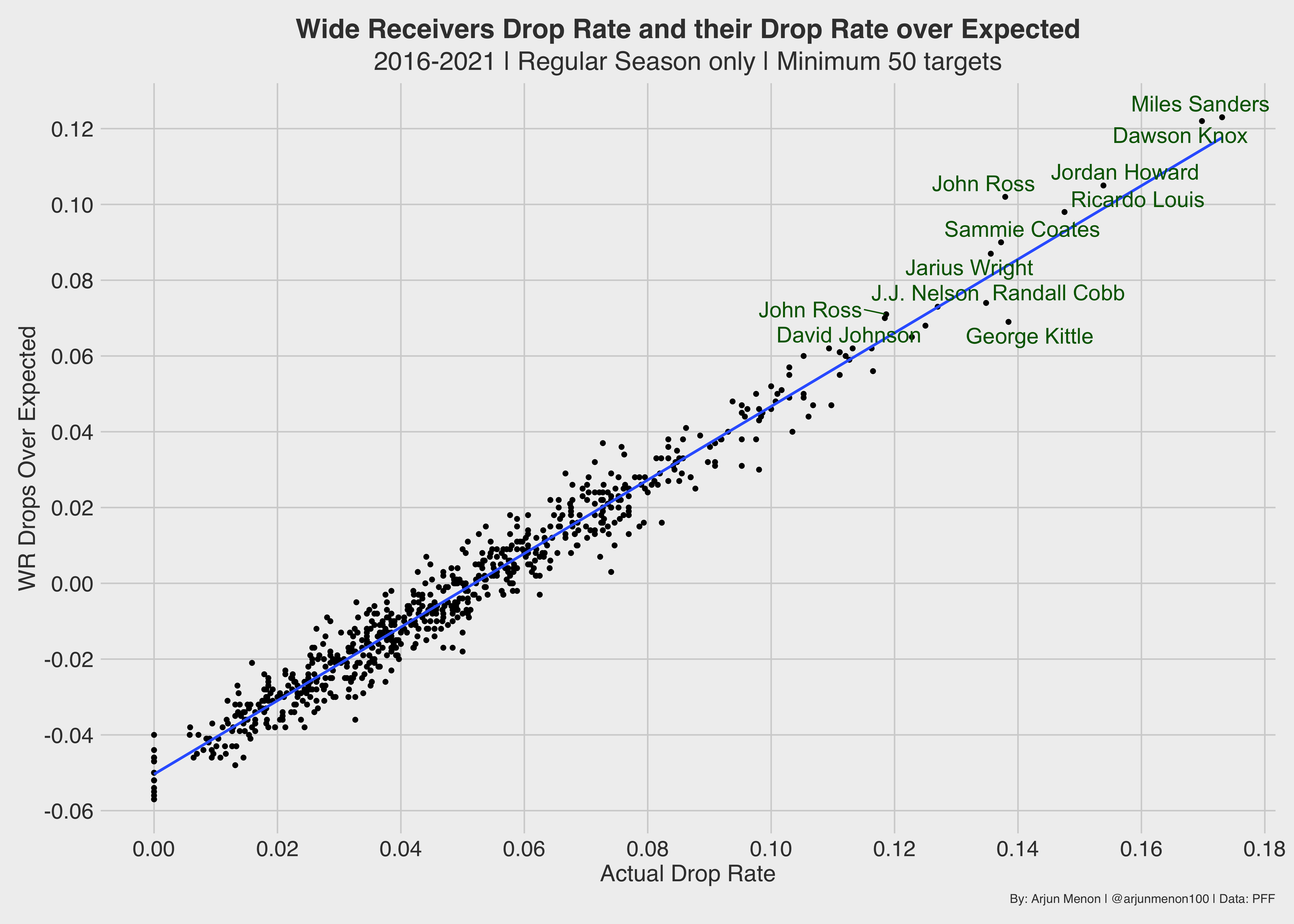 The above chart highlights players who’ve had some of the worst seasons in terms of catching the ball in recent memory. Philadelphia Eagles running back Miles Sanders likely wants to forget his 2020 season where he dropped the ball 12.3% more than expected. Wide receiver John Ross makes an appearance twice (2018 & 2019), with both seasons ranking in the top 10 of all pass-catchers who garnered more than 50 targets in a given season. 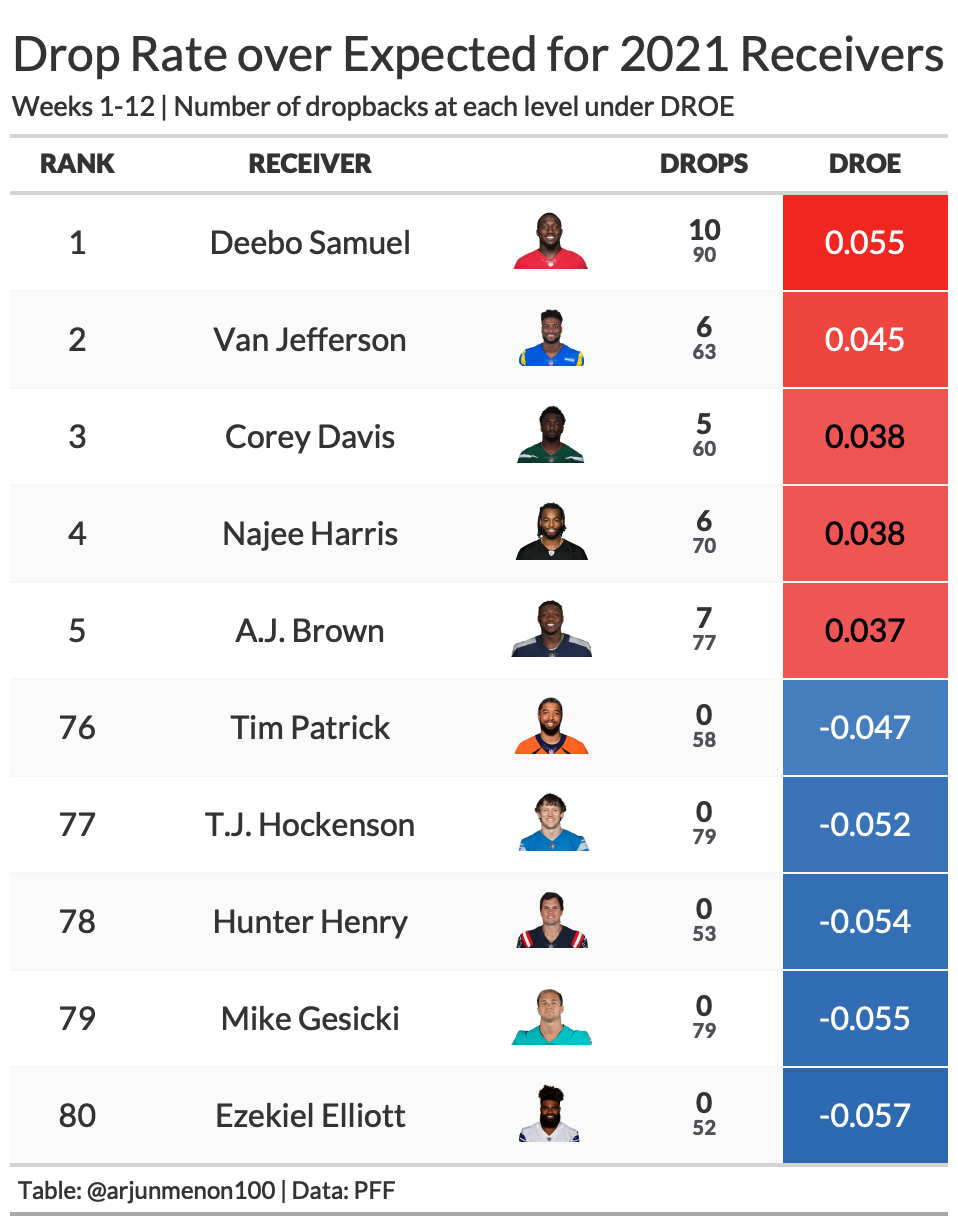 No receiver so far in 2021 has dropped more passes than expected than the San Francisco 49ers‘ Deebo Samuel. Even though he has been an explosive playmaker for the 49ers this year, especially out of the backfield, his 10 drops on 90 targets lead the league. The best receivers at dropping balls less than expected are mainly tight ends, which makes sense given that most of them are relied on to be a safety blanket over the middle of the field for their quarterbacks.

With this info in our back pocket, we can determine which metric is more predictive and tells us more about the idea of drops being a quarterback stat.

Further applications of this could include tracking data to measure receiver separation at a granular level, as well as looking at whether a quarterback hits his receiver in stride. Additionally, adding variables such as weather, turf fields and dome stadiums could improve when the model expects a drop to happen.