Last week, we looked into the first-round edge defenders in the 2022 NFL Draft, projecting them into their rookie seasons using PFF's college-to-pro model — a tool that multiple NFL teams pay for through PFF IQ. This put Detroit Lions first-rounder and PFF podcast docuseries star Aidan Hutchinson as the most likely player to succeed out of that group, which has us enthusiastic about the Lions as they enter the 2022 season.

With the campaign still a ways away, we turn our attention to a position that didn’t have a first-round pick: running back. We’ve used the college-to-pro system before — albeit in an earlier stage — and have thus far nailed the yards per carry exactly on Kansas City Chiefs running back Clyde Edwards-Helaire, a 2020 first-rounder. Here, we look at all 2022 running backs drafted in Round 2, including using the rates at which their new teams ran various run concepts, to estimate yards per carry and broken tackle rates, along with some passing-game projections.

We at the PFF Forecast podcast were critical of the Jets trading up for Hall at Pick 36, essentially trading a greater than 10% chance of getting a starter in Round 5 to move up two spots and select what they felt was the best running back in the class. The idea of laying 1.1 to win 1 when the likelihood that Hall is better than someone such as Kenneth Walker III is roughly 1 to 1 makes most sports bettors cringe.

Nonetheless, Hall is a Jet, and the team's rates of the three main run-concept buckets in 2021 were the following:

Using these rates, along with Hall’s numbers at Iowa State, athleticism metrics, draft pick data and league-average rates of things such as short-yardage runs, run blocking and box-count rates, we arrive at the following for Hall’s projected rate stats as a rusher:

Here, Hall projects as a slightly below-average rusher in Year 1, both overall and after contact. This largely coincides with his production at Iowa State, which is good in some places (relative to other PFF College era running backs who played in the NFL) but not in other key areas, such as yards after contact:

His athleticism is 1.3 standard deviations better as a rusher than the average running back (90th percentile), and it would likely have been higher if he participated in more of the tests: 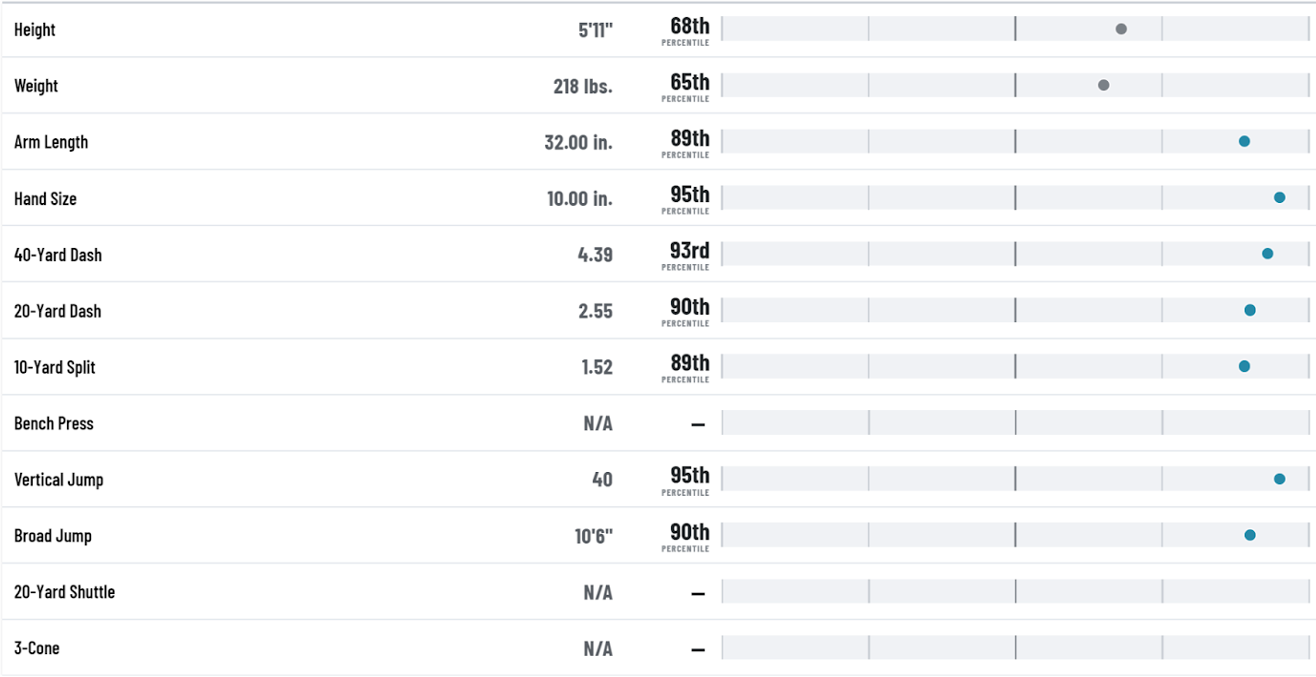 Hall appears to be an above-average back in the receiving game from the jump, which will be important as the Jets try to provide as much support to second-year quarterback Zach Wilson:

While Jets running backs Michael Carter and Ty Johnson averaged 9.0 and 10.9 yards per catch in 2021, respectively, neither caught more than two-thirds of the passes thrown their way. As such, Hall’s projected 6.4 yards per target will be a welcomed addition.

All in all, Hall is still not likely worth what the Jets gave up to get him, but independent of that, he will be a plus relative to what the team had last season and should be in consideration in fantasy drafts and prop betting all year as a result.