Early breakout candidates for all 32 NFL teams in 2022

Free agency and the draft are now on the minds of every NFL team except the Cincinnati Bengals, Kansas City Chiefs, San Francisco 49ers and Los Angeles Rams — the final four vying for the Lombardi Trophy.

Contract, draft and trade decisions will all be weighed in the coming months. In those discussions, expectations for younger players expecting to take on a larger role and produce at a quality level in 2022 will need to be set. This begs the question: Who is the biggest breakout candidate for each NFL team next season? With the help of PFF grades and other advanced metrics, we will answer that question here.

The following is an early look at a breakout candidate for all 32 NFL teams. Some franchises have several candidates, while others are spread thin, but one player stood out above all on their respective team.

Expanding Moore’s role and route tree is going to be key in any potential breakout from the 2021 second-round pick. The 5-foot-9, 180-pound receiver was a sole underneath weapon for Arizona this past season. Head coach Kliff Kingsbury’s offense is run by those underneath concepts, and Moore was productive on them with a 70.7 PFF grade, 7.9 yards after catch per reception and 13 broken tackles on 59 catches. In order to build on that, Moore’s 1.3-yard average depth of target will need to grow. 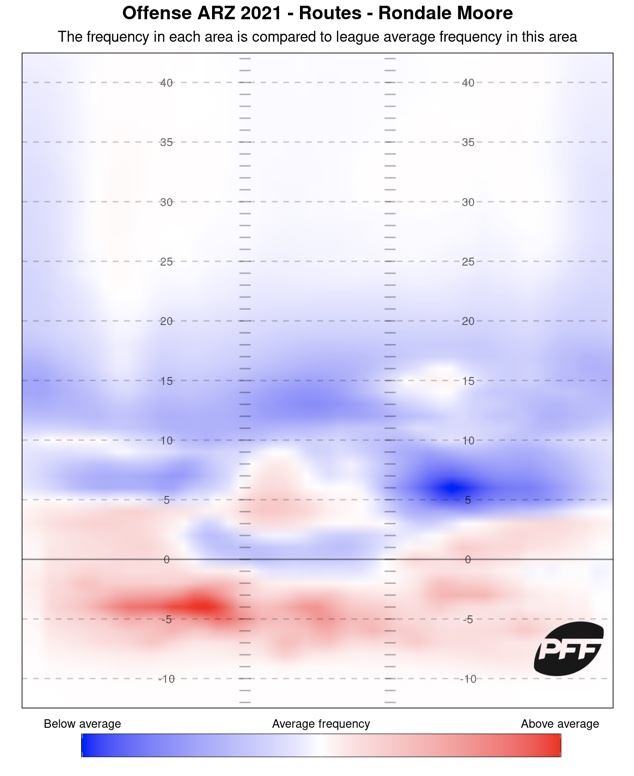 Walker has played only 581 snaps over his two years in the NFL, and the 2020 fourth-round pick has earned the right to play far more in 2022 given his small-sample success. He has earned a 75.3 PFF grade in that span, including a 90.1 mark in coverage that featured a pick-six this past season in Cover 1 Rat:

Mykal Walker looked like the primary target on that throw. Pick six for the Falcons 2 straight weeks!

According to Next Gen Stats, Walker reached over 21 miles per hour on the return — the fastest by a linebacker with the ball in the last five years. With Foyesade Oluokun hitting free agency, the path is there for more reps for Walker in 2022.

Bateman’s rookie year got started a bit late due to a training camp injury. The production left a lot to be desired when he finally took the field, as he generated a 64.9 PFF grade and 1.26 yards per route run. The 6-foot-2, 210-pound wide out did, however, shine at the catch point. Bateman attacked the ball in contested scenarios in college, and that translated to the NFL — he caught 10 of his 15 such targets as a rookie.

The 2021 first-round pick has stated how the “IQ of the game” was the biggest adjustment for him his first year in the NFL. Bateman had a tough time effectively separating on the outside in the NFL, but given his collegiate dominance with his releases and route-running, there’s reason to believe he takes a big jump in 2022 with a clean bill of health and stable quarterback situation.

Brown was known for having elite measurables for a tackle prospect in the pre-draft process. The 6-foot-8, 290-pound tackle ended up going in the tail-end of Round 3, but his rookie season showed he just might exceed that draft slot. Brown posted a 70.6 run-block grade in 2021. His pass-protection was a hindrance, though. Brown allowed 36 pressures en route to a 49.1 pass-block grade.

Horn was only able to play 95 coverage snaps before getting shut down due to injury in his rookie campaign. He was targeted five times in that span and allowed one catch for an 8-yard touchdown but made it up with an interception the next week. If healthy in 2022, Horn is a prime candidate to break out. In his last year in the collegiate ranks, Horn allowed only eight catches across seven games while making nine plays on the ball. He brings the physicality and confidence and is only improving from a technical standpoint.

As bad as the situation was in Year 1 for Fields, he showed a lot of promise in the Windy City with his arm talent and 4.4 speed. Fields recorded a 6.1% big-time throw rate and 14 explosive runs of 10 or more yards, both of which were fifth among quarterbacks in 2021. Fields rarely put the ball in harm's way from a clean pocket, as evidenced by his fifth-ranked 1.4% turnover-worthy play rate on clean-pocket dropbacks. It wasn’t a banner rookie campaign, but he still showcased the traits to be a star quarterback.

Justin Fields had more high-level throws on MNF than any rookie has had in a single game this year pic.twitter.com/9y6JvJFLw7

Evans is simply too good of a receiver to be kept off the field in the coming years for Cincinnati. The 2021 sixth-round pick flashed his pass-catching chops as a rookie this year with an 82.4 receiving grade and 2.16 yards per route run. He has only played 103 snaps, but that number should increase next year with his ball skills and strong athletic profile. The running back put on a clinic at last year’s Senior Bowl. This breakout possibility has a lower floor than perhaps anyone else on this list, but the ceiling is high.

Delpit was one of the steals of the 2020 NFL Draft, going in the middle of Round 2. He displayed NFL-ready coverage ability in LSU’s historic 2019 National Title run, but Delpit was unable to showcase his talent as a rookie due to an Achilles injury in training camp. The safety made a full comeback for Year 2, though, and he showed his potential down the stretch.

Delpit took on a starting spot in Week 11, and he owned the fourth-best coverage grade among safeties from that point on. Off-ball linebacker Jeremiah Owusu-Koramoah and cornerback Greg Newsome II were exceptional in their 2021 rookie seasons and are expected to take an even further step in 2022, but Delpit is right there with them.

Odighizuwa was an intriguing third-round selection last April after his continued growth at UCLA, dominance at the Senior Bowl and blend of explosiveness and strength. While his rookie campaign wasn’t the best, the 6-foot-2, 279-pound interior defensive lineman still has breakout potential in 2022. Odighizuwa trailed only Christian Barmore among first-year interior defenders in pass-rush snaps (409), pass-rush grade (63.0), pressures (38) and pass-rush win rate (12%).