Coverage play in football is notoriously unstable and difficult to fully capture with statistics. Even the most reliable and widespread metrics tend to be conditioned on the defender being targeted, which tends to result in defensive backs being evaluated only when they make a mistake. This is especially true for press coverage — a difficult-to-learn skill where mistakes can lead to potentially disastrous results.

Therefore, in using play-by-play statistics, it's incredibly difficult to make forward-looking projections for defenders. We’ll avoid this by retrospectively ranking cornerbacks in press coverage in 2021 and discussing qualitatively how we expect the defenders to perform in 2022. To do this, we'll make a weighted average of several statistics normalized against the group mean for when a cornerback is charted as having a man coverage role from a press alignment on that snap.

Run-pass options, play action and screens were removed from the sample. On RPOs and play action, the potential to have to enter into a run fit may particularly affect slot cornerbacks’ ability to properly cover. Screens are removed because if a defender is pressing the target of the screen, they are likely to be targeted and unlikely to break up the pass, regardless of their ability in press.

To have an empirical basis for each statistic's weight, their year-over-year R-squared figure was used. Practically, this means that pass breakup percentage surprisingly received the most weight, followed by target rate. On the other hand, yards per route run allowed and open rate (the rate of targets attributed to the defender charted as open) both have extremely small weights. 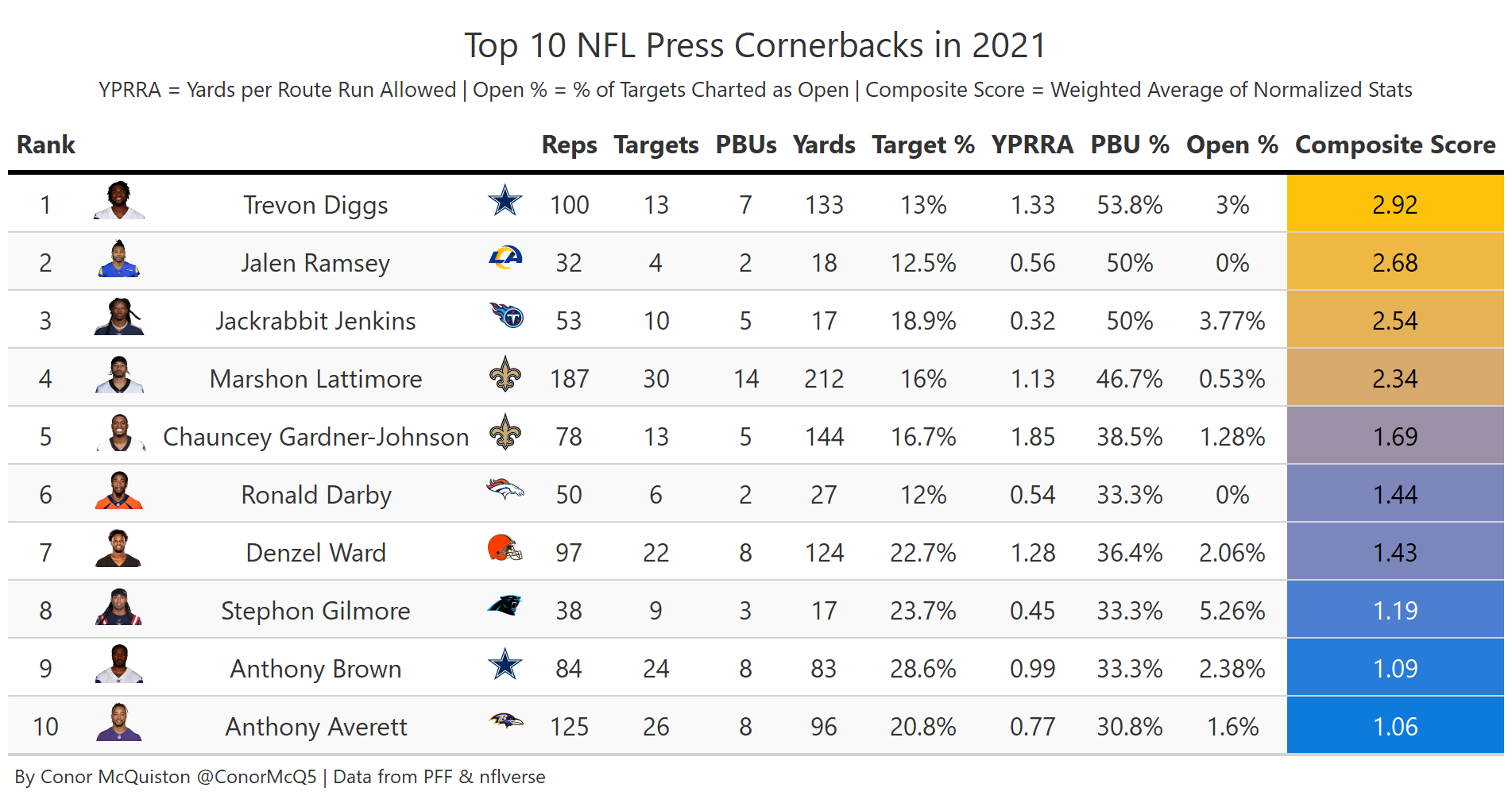 Much ado has been made already about Diggs’ All-Pro 2021 season and how his gaudy interception total may not reflect his true coverage ability. The Athletic's Diante Lee, formerly of PFF, detailed how Diggs’ massive frame — his wingspan is over 6-foot-6 — and ability to maintain top speed allow him to successfully employ a jump-press technique. This is, of course, a risky endeavor and shows up in his low PFF grade. But considering the Cowboys’ middling 2022 schedule and Diggs’ youth, he should still be successful even if he breaks up fewer passes.

The 2021 first-team All-Pro has long been considered one of the NFL's best coverage players since entering the league in 2016. That remains true in press coverage, where Ramsey is among the elite. His only limiting factor appears to be that, in Raheem Morris’s defensive scheme, he is not often tasked with press-man responsibilities.

Jenkins is currently not with an NFL team, and the market is unclear for the 33-year-old, who disappointed in 2021 in the eyes of some Titans writers. However, even with his future unclear after a rocky season, Jenkins still managed to be one of the more impressive press coverage cornerbacks in the league with significant volume.

Lattimore, a four-time Pro Bowler, was tasked with press-man responsibilities more than any other cornerback in 2021 in the Saints’ press-heavy system. He excelled in that role, rating as firmly above average in every metric in this study despite covering the likes of Davante Adams, D.K. Metcalf, Tyler Lockett, Mike Evans, Chris Godwin and Stefon Diggs. Lattimore enters his age 26 season with defensive coordinator Dennis Allen being promoted to head coach, so there is no major reason to expect a drop-off in his abilities.

One of the NFL’s top instigators is also one of its top press cornerbacks. It’s important to mention that Gardner-Johnson lines up primarily in the slot on a team with a bona fide superstar corner in Marshon Lattimore and a solid No. 2 in Paulson Adebo, so he likely is not getting the most difficult matchup on any given Sunday. He still fills his role well, however, and while it is difficult to say whether he will once again rank among the NFL's best, he’ll still likely be serviceable at worst.

In the former second-round pick’s return to Denver with new running mate Patrick Surtain II, he fared extremely well in press coverage. While Darby did not break up many passes, the data suggests he did an excellent job of preventing targets despite being flanked by another strong outside cornerback. It is unclear how often new defensive coordinator Ejiro Evero will task Darby with press coverage, but the veteran should still be strong when asked to do so.

In some respects, Ward’s statistical profile in press coverage resembles a less extreme version of Trevon Diggs. He gets targeted fairly frequently and at times can give up some big gains. But overall, he disrupts enough passes against some of the best receivers in the NFL to be a positive asset in press coverage. At only 25 years old, Ward should continue to be a net positive, although considering how often he gets targeted, it would not be a surprise if in any given season he swung drastically up or down in production metrics.

The five-time Pro Bowler and two-time first-team All-Pro was an extremely successful press cornerback in his half-season of action in 2021. While Gilmore recorded two interceptions in press-man coverage, most of his value came from limiting targets and allowing minimal gains on receptions. Barring notable regression entering his age 32 season, he should excel under defensive coordinator Gus Bradley with the Indianapolis Colts in 2022.

While Brown is certainly great at bullying opposing receivers, leading to his four defensive pass interference penalties against the Raiders in 2021, he plays in an advantageous system in Dallas. Trevon Diggs’ presence allows Brown to frequently match up with an opponent’s No. 2 receiver, and the quick pressure the Cowboys get from Demarcus Lawrence and Micah Parsons minimizes how long he has to cover for. So, while Brown is strong in press coverage, his ranking here is likely inflated due to his environment.

Averett is undoubtedly one of the better press cornerbacks in the league. He doesn’t get targeted very often, relative to others, and limits yards when receivers do make catches against him. His 2021 numbers were aided by Marlon Humphrey facing No. 1 receivers for most of the year, though. Averett will not have that luxury as a Las Vegas Raider in 2022, but it appears unlikely defensive coordinator Patrick Graham will task him with much press-man coverage. It is worth mentioning that Averett's ranking is depressed in this exercise due to his relative lack of ball skills.