The Ravens are revolutionizing defensive football

While the NFL tries to figure out how to stop the Baltimore Ravens’ Lamar Jackson-led offense — and rightfully so — the defense is equally intriguing, in both construction and style.

Offensively, the Ravens have NFL defenses reeling with their high-powered, dual-threat run game, Jackson’s improved accuracy and ball security, and one of the best offensive lines in the league. In addition to impressive use of their talent, they’re also finding edges through use of motion, formationing, and fourth-down decisions that have the analytics community blushing.

But what about the defensive side of the ball? As forward-thinking as the offense has been, the Ravens defense is finding its own ways to win on the margins.

Build through the secondary

The 2019 offseason saw the Ravens lose edge defenders Za’Darius Smith and Terrell Suggs in free agency — a pair that combined for 119 total pressures, good for 35% of Baltimore’s 2018 team total. They also let linebacker C.J. Mosley walk for a big contract with the New York Jets, and it looked like a gutted front-7 would be the Ravens’ biggest question mark heading into the 2019 season.

While the Ravens allowed their productive pass-rushers to hit the open market, PFF’s Research and Development team was finalizing their thoughts on the actual value of pass-rushers, especially when compared to coverage players. Depending how much you were taught that football is won in the trenches, the results may have been counterintuitive, as strength on the back end proved to be more valuable than getting after the quarterback, and the Ravens’ team-building effort appeared to be following a similar blueprint.

Instead of replacing Suggs and Smith up front, the Ravens made free safety Earl Thomas their key offseason signing, adding to a plethora of riches in the secondary and prompting us to declare the Ravens as the best secondary in the NFL heading into the season. That unit got even better with the midseason acquisition of CB Marcus Peters, who is known for his ability to create turnovers despite giving up his fair share of yards in coverage. The pass-rush group did not get the same glowing remarks, ranking 25th in the preseason rankings as its question marks were hardly answered during the offseason.

Going back to our premise that coverage is the most important part of the defense and pass-rush can be manufactured, how have the Ravens done in that regard? We can start by looking at the PFF team grades that have the Ravens ranked seventh with an 84.5 coverage grade while their pass-rush grade of 64.9 ranks 27th. Those numbers align very well with preseason expectations, and they match up well with how the New England Patriots have built their defenses in recent years. Recent Patriots Super Bowl winners had excellent coverage units with below-average pass-rushes, and that’s where the Ravens are trending this season.

It’s important to first understand how the PFF pass-rush grade works. It’s a measure of how well a player, and subsequently a team, defeats blocks as pass-rushers, with added bonuses for finishing plays and forcing fumbles. This is an area the Ravens are clearly weak, both on paper and in practice, but it’s where they’ve decided to create one of the most unique defensive schemes to complement their trend-setting offensive system. The Ravens blitz more than any other team in the league, and it’s not even close. They send extra rushers at the quarterback 54.5% of the time, 10.6% more than the next-closest team and 24.6% more than the league average. 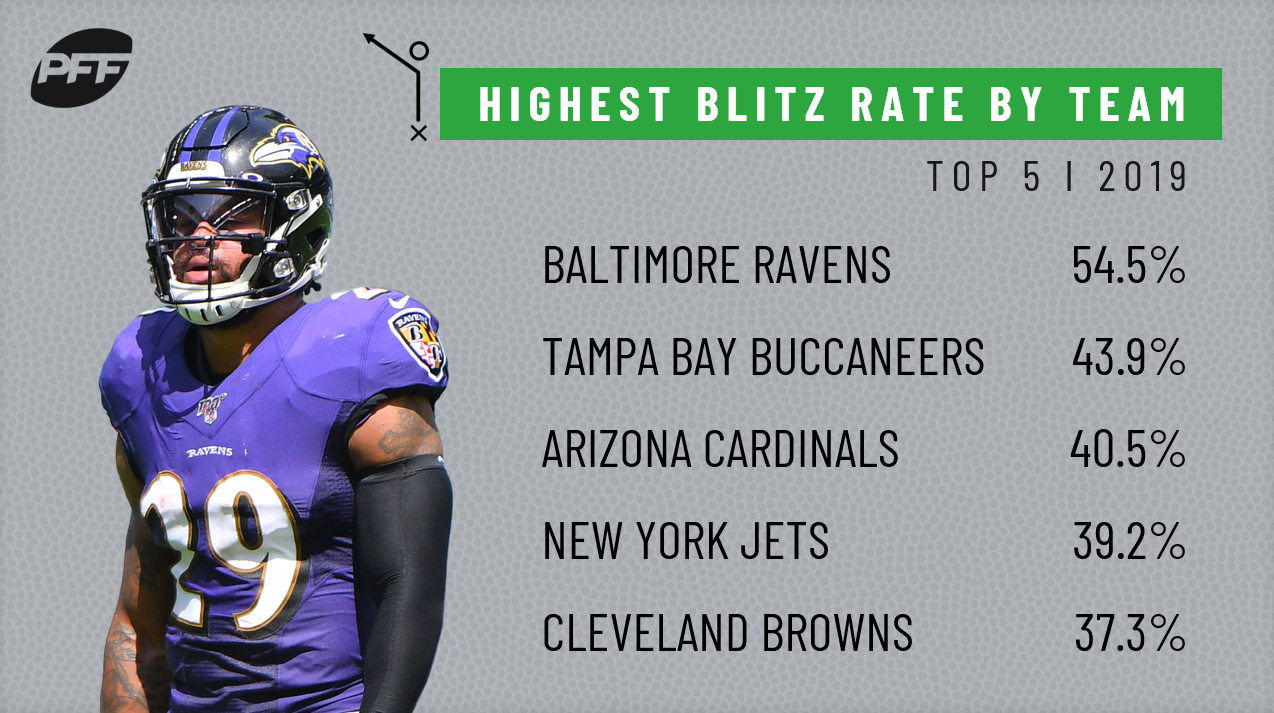 This extreme split has led to the Ravens ranking seventh in pressure percentage, despite their No. 27 ranking in pass-rush grade. Remember, the grade accounts more for individual performance, so the proper way to read this is that the Ravens are creating pressure through scheme and aggressiveness.

Of course, blitzing isn’t a foolproof method, and uncontrolled chaos is a recipe for disaster against NFL quarterbacks. But Baltimore’s strong secondary allows them to take more chances up front and it forces quarterbacks to get the ball out quickly against one of the best coverage units in the league.

The other place where the Ravens are keeping opposing teams off balance is with their stunt game. While they don’t stunt much more than the league average, they’ve proven very effective, as the Ravens have created pressure on 50.5% of their stunts since Week 5, and that’s translated to the fifth-best EPA against during that time. 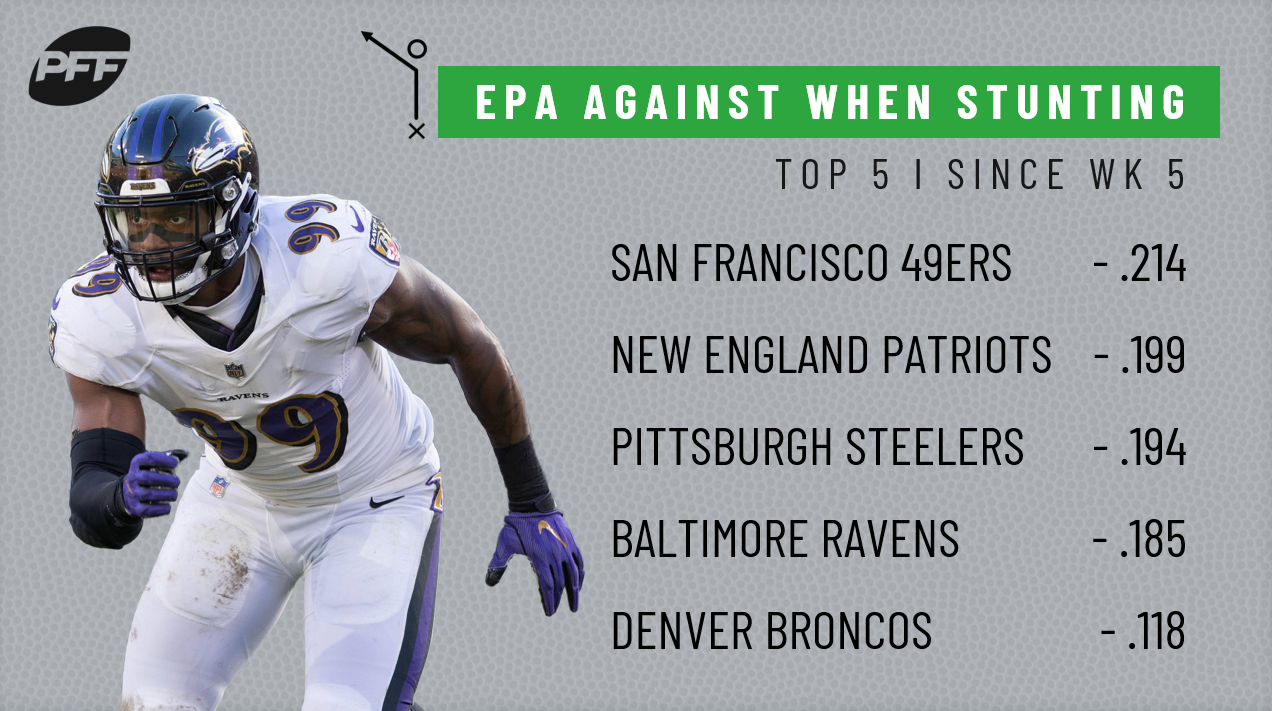 We put in the Week 5 cutoff as it took a few weeks for the Ravens defense to get going, but they’ve been excellent since that time. Baltimore’s defense consistently crowds the line of scrimmage, creating havoc for opposing offenses through blitzes and stunts, and that’s led to players like Matthew Judon already reaching his career-high with 53 pressures (nine sacks, 20 QB hits, 24 hurries). Overall, the Ravens have 12 players with at least 10 pressures, including five edge defenders, three interior defensive linemen, two linebackers, and two safeties. Which poses the question, are the Ravens truly changing the game defensively?

In basketball, there’s a prevailing thought that positions are becoming less defined as player skillsets evolve. Big players are doing “little man things,” creating mismatches that may not have existed in years past. Could this brand of “positionless football” make its way to the NFL?

The Baltimore defense is unique in how they’re using the players in the back-7 to create confusion for opposing offenses. Consider Thomas, who came over from Seattle as the quintessential free safety in a cover-1/cover-3 scheme. Thomas was the catalyst for the Seahawks’ best defenses, which were some of the simplest, assignment-driven units in the league. Each player had a specific role and they played it extremely well. It was rare to see a play in which Thomas was not lined up as the single-high free safety, with his primary role being the middle of the field, collecting any throw up the seams and perhaps even getting to the catch point on any pass thrown at 20-plus yards due to his incredible range.

Baltimore has had a different plan for Thomas, tapping into his instincts and athleticism by playing him closer to the line of scrimmage much more than he ever did in Seattle. This season, Thomas has played in the box on 234 of his snaps, a placed he lined up on 329 times during the six-year period of 2013 to 2018. Thomas has also blitzed more than ever, as he’s rushed 48 times so far this season, compared to only 15 rushes 2013-18. What does it mean? The Ravens could have kept Thomas in his comfort zone as a center field safety, but they’ve expanded his skillset and his presence close to the line of scrimmage has led to multiple big plays.

Watch as Thomas instantly breaks on Jarvis Landry’s slant route on Cleveland’s run/pass option. Landry wants no part of a closing Thomas over the middle of the field, and his business decision leads to an interception for the Ravens.

Facing a key third-and-4 late in the game, the Ravens attack with both safeties off the edge. Thomas is able to get inside the running back to force QB Josh Allen backward in the pocket for the sack.

It’s not just Thomas who has expanded his role, as the Ravens are at the forefront of bringing blitzers from all angles and dropping players into coverage who are normally designated pass-rushers.

Watch as the Ravens send both cornerbacks on the blitz (double CAT blitz), leading to the Jared Goff sack.

Some other highlights from a unique Ravens defense:

The Ravens are pushing all the right button on both sides of the ball. While the defense may not be doing anything the NFL has never seen in isolation, it’s the combination of things that have made them so successful. From building their defense back to forward, to manufacturing pressure through blitzes and stunts, to clouding the definition of player “roles” to the detriment of the offense, Baltimore continues to stay one step ahead of the rest of the NFL this season, and they’re doing it on both sides of the ball.