Cincinnati Bengals quarterback Joe Burrow may have found a way to claw out a 19-16 divisional-round win over the top-seeded Tennessee Titans on Saturday, but he also became the third quarterback in NFL history to be sacked nine times in a playoff game.

While PFF has determined that quarterbacks have a surprising amount of control over the pressure they receive, this does not leave the Bengals offensive line free of blame. As a unit, they have received a 58.4 pass-blocking grade this season, the eighth-worst in the league. They are comfortably the worst unit remaining in the playoffs.

Offensive lines of this caliber don’t typically make it this far into the postseason, so it's worth looking deeper into the issues they could run into against the Kansas City Chiefs in the AFC Championship Game.

1. Where does most of the Bengals' pressure come from?

2. What do opponents do to cause the pressure? 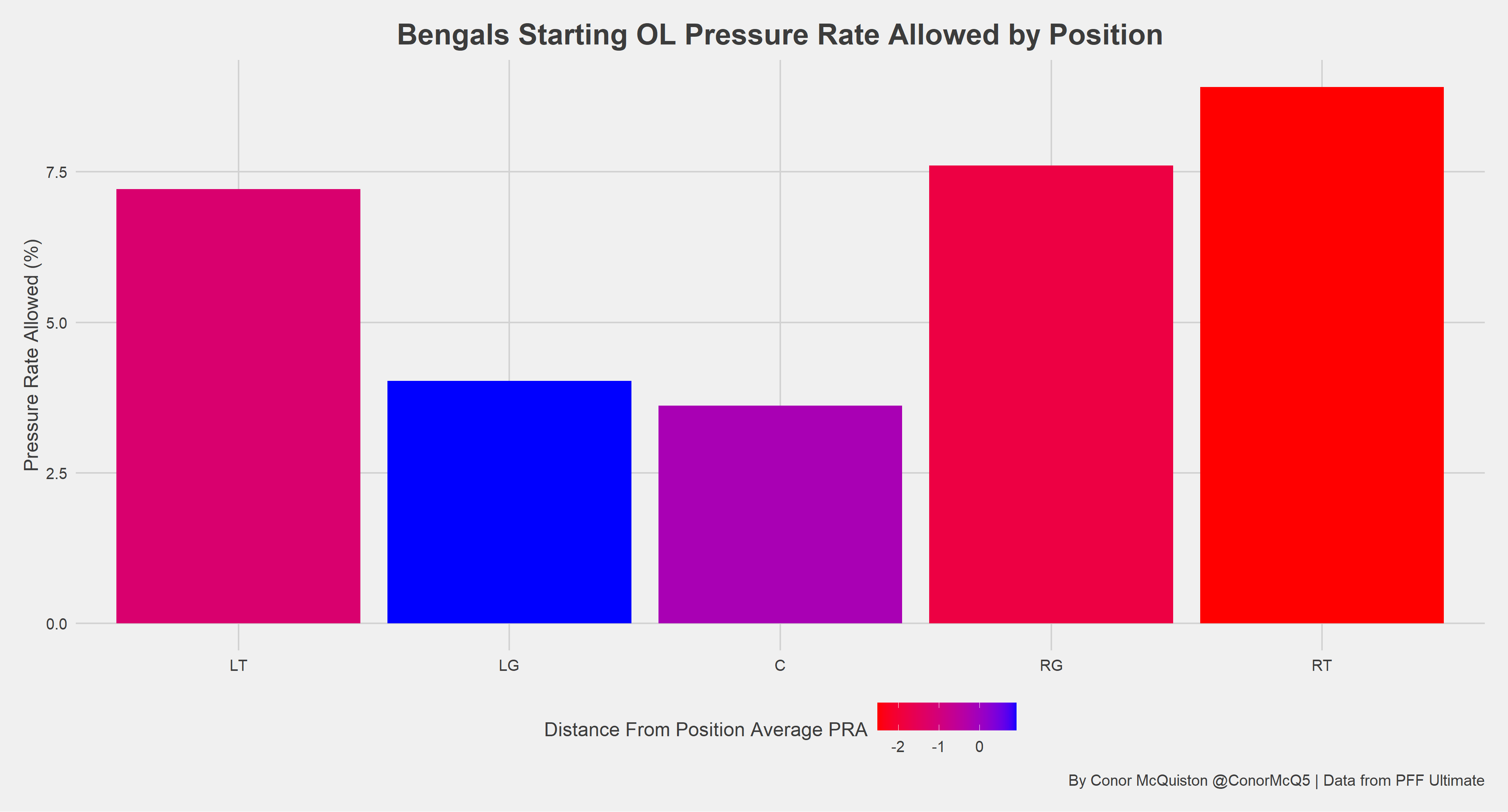 The answer to the first question is straightforward: the right side of the offensive line.

Since becoming the starter at right guard in Week 9, second-year offensive lineman Hakeem Adeniji has put up a PFF pass-blocking grade of only 48.9, 69th among 84 qualifying guards over that span. His 7.1% pressure rate also ranks 69th among that same group of players.

Right tackle Isaiah Prince has not fared much better. Since becoming the full-time starter in Week 12, Prince has earned a 51.4 pass-blocking grade and allowed pressure on 8.9% of his pass-blocking snaps, both bottom-15 marks at the position.

The remainder of the Queen City’s offensive line has been serviceable as of late. Left tackle Jonah Williams and center Trey Hopkins have combined to produce only one below-average pass-blocking grade over the past month. Left guard Quinton Spain has allowed pressure on 3.8% of his pass-blocking snaps on the year, 23rd among 89 qualifying players at the position.

This crude evaluation of the offensive line does not account for the short passes and screens, the staples of the Cincinnati offense. Nor does it acknowledge that opposing defensive coordinators likely focus their pressure on the right side of the Bengals line, thus artificially improving the left side's numbers.

We understand the Bengals' weak point well, but this does not answer the question of how the defenses are getting there. To do so, we will break pass-rush snaps into five categories: blitzes, creepers, simulated pressures, standard with a stunt and standard without a stunt.

For this article, they are defined as follows:

Blitz: When five or more defenders rush the passer

Creeper: When three or four defenders rush the passer, but a stand-up outside linebacker or defensive lineman drops into coverage while another defender comes on a blitz

Simulated pressure: When there are five or more defenders “threatening” (defined here to be non-CBs within a yard of the line of scrimmage) to rush the passer, but only three or four defenders rush the passer

Standard rush: The three or four defensive linemen and/or outside linebackers directly rush the passer

Standard rush with a stunt: The three or four defensive linemen and/or outside linebackers rush the passer, but one (or more) loops around to another gap

We are separating these different types of pressures because they have different goals from a defensive perspective and thus stress offensive lines differently.

Blitzes are meant to conjure one more defender than the offense can account for or cause a series of one-on-one matchups where just one defender needs to beat one man. Standard rushes are meant to maximize the bodies available in coverage. Stunts allow defenses to take advantage of inattentive offensive linemen and quarterbacks.

Creepers and simulated pressures are unique since their main goal is to manipulate protection rules and generate free rushers or one-on-one matchups while keeping bodies available for coverage.

Creepers do this by dropping defensive linemen or edge rushers into coverage and bringing the last rusher from an unexpected angle. Simulated pressures do this by forcing the offense to account for as many as seven pass-rushers, thus leaving advantageous lanes and matchups for the defenders who rush the passer.

So, by separating the different types of pressure, we can more effectively analyze how the Bengals' protection holds up when the assignments are straightforward and when the picture changes post-snap.