(As we head into the 2019 fantasy football season, we’re taking a trip around the league to identify the offseason moves we’d most like to see each team make for fantasy purposes. Today: the Cincinnati Bengals)

Cincinnati’s 2018 season started out promisingly enough. The team was 4-1 through five weeks, beating two eventual playoff teams in Indianapolis and Baltimore to start the season. The offense was clicking, averaging more than 30 points a game, with A.J. Green being his usual strong self, Tyler Boyd breaking out behind him, and Joe Mixon realizing his sky-high potential despite missing a couple of games to injury.

The bright spots ended there. 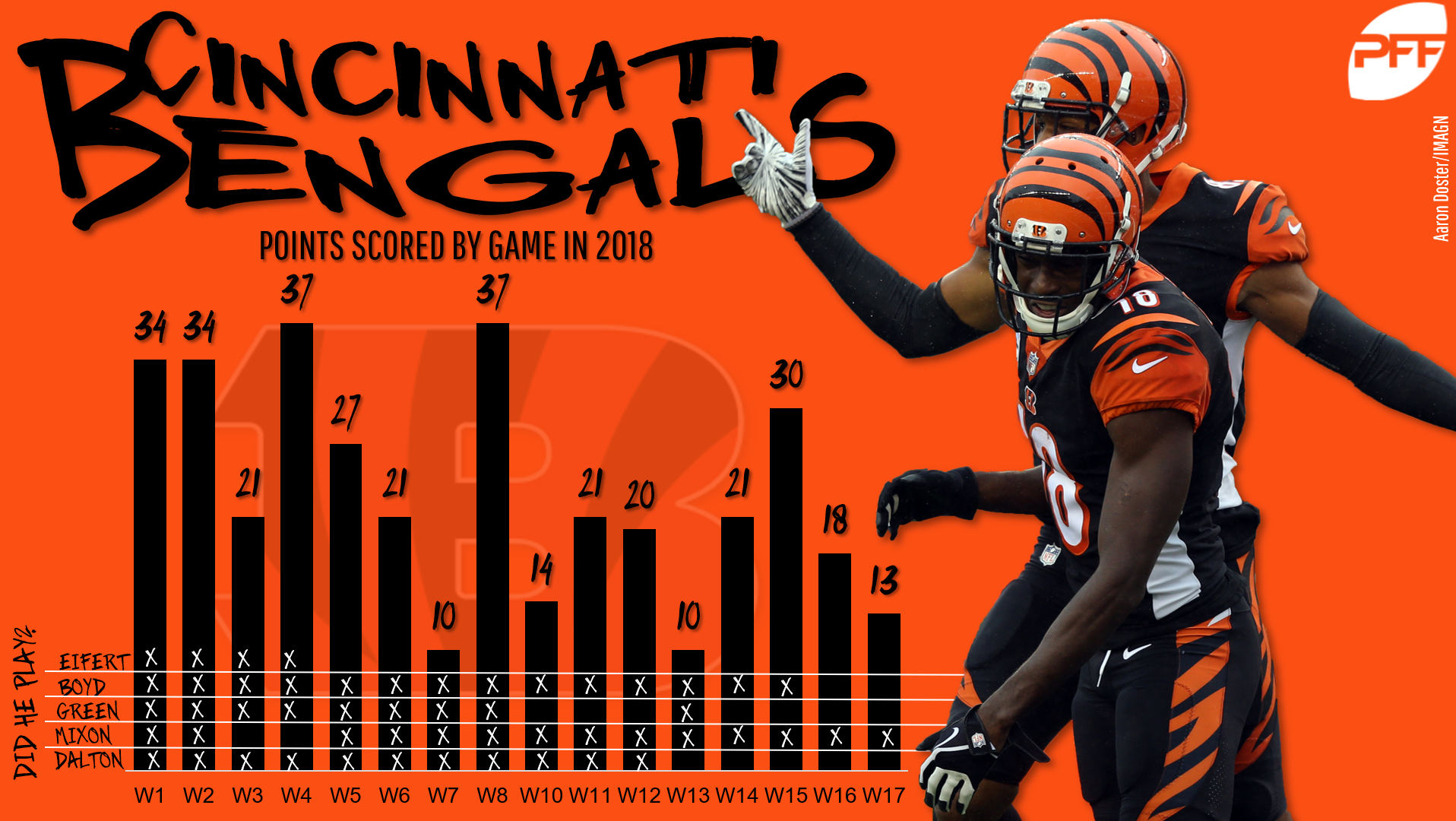 After Week 5, the Bengals went 2-9 the rest of the way, beating only Tampa Bay and Oakland. Tyler Eifert was lost for the year in Week 4; Green and Andy Dalton would eventually join him, and even Boyd was hurt by the end of the year. After that 30 points-per-game average to start the year, the team fell under 20 per game the rest of the way. The defense tanked in glorious fashion, putting up sub-60.0 grades six different times. The team will go into 2019 with a new head coach and new coordinators on both sides of the ball.

In short, there are a lot of areas in which the Bengals could improve from a fantasy perspective in 2019.

Three offseason moves we want to see for Cincinnati

The clock hasn’t run all the way out on Dalton’s time in the sun, but it’s ticking. He actually had the No. 13 quarterback grade across the season. But as quarterback production has skyrocketed around the league, Dalton’s hasn’t — his passer rating hasn’t cracked 90 in either of the last two years. And with the Bengals perhaps in full start-over mode, considering everything they need, it’s time to at least consider who’s next. If they do rebuild, Dalton isn’t likely to be a part of the team’s next contender.

This year’s draft isn’t littered with potential starting quarterbacks as some have been in recent years, but with the uninspiring Jeff Driskel behind Dalton, the Bengals should start at least grooming someone as his eventual replacement.

The Bengals should let Eifert leave in free agency with all well wishes. He had one great year for the team and by all accounts was quite popular. But he needs to be on an offense that can use him without relying on him to stay healthy at this point, and that isn’t Cincinnati. With C.J. Uzomah and Tyler Kroft hitting the market as well, the Bengals don’t have much at the position.

This year’s tight end draft class is deep with pass-catchers. The Bengals can bring in a lower-tier free agent or retain Uzomah if they want, but they should definitely use one of their picks on upside at the position.

The Bengals need help at right tackle. James is the youngest of the high-end free agents at the position, hitting the market at 27 and coming off a 70.8 PFF grade. Protecting Dalton, Mixon, and whoever else might be back there needs to be a priority, but it should be done with an eye toward the future as well. Signing the 30-year-old options in the market this year is adding a player whose productive days might be behind him the next time the Bengals are playoff contenders.