Which quarterbacks are most subject to temperature in 2018?

In my previous article, I explained how I can use the Open Weather Map API to pull weather forecasts for upcoming games. That should prove useful for DFS projections, but with just a five-day forecast window, I won’t be able to project weather for games more than a week out. Mostly, that data restriction is a non-issue because wind and precipitation forecasts aren’t very accurate more than a few days into the future anyway. However, temperature is another story. One may not be able to forecast the exact temperature weeks and months in advance, but the winter months tend to be colder than the autumn ones. And since my weather research identified cold temperatures alone as a factor that influences pass/run ratio, completion percentage, yards per attempt, and a few other statistics, even a basic projection of game temperatures should improve the accuracy of full-season projections.

Because of the efforts I went to in order to research the impact of weather in the first place, I already had a database of temperature readings during every NFL game since 2009. That isn’t the comprehensive data set you would need to make sophisticated long-term temperature projections that account for the specific properties of each stadium city, but I thought it might be enough to be maybe 90 percent as accurate. That seemed like a fair tradeoff for the time it would save me, and when I ran a simple heat map of game temperatures based solely on the game date and the latitude of the stadium, I found support for that assertion. There is a clear relationship where the deeper into the football calendar and the farther north you travel, the colder you can expect games to be. 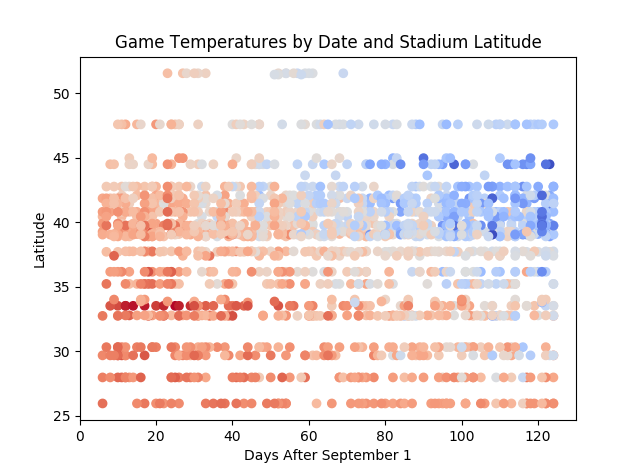 Note that this chart includes only day games. I ended up developing separate models to project day games and night games that are otherwise identical. The models use machine-learning algorithms that are similar in nature to the ones I use to calculate receiving and rushing Yards Added. These models project a discrete temperature for every game, and when I tested those in-sample from 2009 to 2017, there was a correlation coefficient of 0.90 with only those two input parameters. In addition, the models calculate a probability that game temperatures will fall between 30 and 49 degrees or fall below 30 degrees, which are the thresholds my previous research found limited the passing game. Those probabilities provide the means to more accurately project future performances by way of a series of simulations.

Those full-season projections are still many steps down the road for me, but that doesn’t prevent my providing a sense of what you can expect them to show for the impact of cold temperatures. Since the majority of quarterbacks will play for the same team in 2018 and their home games exert the heaviest influence on expected cold temperature games, few passers can expect major differences in their weather schedules. The likes of Tom Brady and Aaron Rodgers carry a temperature disadvantage year after year. That said, there are a handful of quarterbacks I project to see about two more or fewer cold-weather games this season.

I expected to see Josh McCown and Carson Wentz at the top of the list. You should not overlook the fact that the timing of their injuries cost them mostly cold-weather games that likely would have pulled down their per-game averages for the season. Rodgers would have joined them if I had eased the qualification standard, but since his established level of production is built in cold weather, your perceptions of his likely production are no doubt spot-on.

Among the healthy, Derek Carr should see the biggest jump in his total of cold games. He played just one cold game — Week 8 in Buffalo (44 degrees) — and one freezing game — Week 16 in Philadelphia (29 degrees) — last season. This year, a divisional matchup with the AFC North will send him to Baltimore in Week 12 and Cincinnati in Week 15 for some likely frosty affairs, and his late-season games at home and in Arrowhead are about even-odds to be cold where they weren’t last season.

On the other side of the ledger, Kirk Cousins is really the only quarterback who can expect a major difference. And despite his move to Minneapolis, his change should be a positive one. In the second half of 2017, Cousins played through cold weather in four different home games and in Week 9 in Seattle. Then, he closed the year in 16-degree temperatures in New York. The dome on U.S. Bank Stadium will keep the bad local weather at bay for him this season, which leaves second-half trips to Chicago, New England, and Seattle as the only major threats for cold conditions.