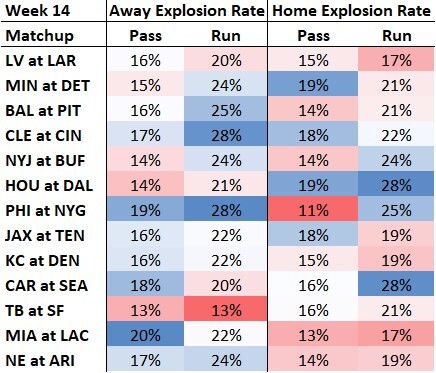 Take a bow, Jalen Hurts: All the Eagles’ 24-year-old quarterback has done in his first 31 career starts is total 64 combined passing and rushing touchdowns. Last Sunday’s masterpiece over the Tennessee Titans included three through the air and one on the ground. Hurts is engineering the league’s second-ranked scoring offense and has the 11-1 Eagles looking like the class of the entire NFC.

Credit to head coach Nick Sirianni for his continued willingness to exploit his opponent’s weaknesses instead of simply going through the motions. Example: Hurts threw the ball just 28 times against the Green Bay Packers’ lackluster front seven in Week 12 before chucking the rock 39 times against the Titans’ porous secondary despite building a three-score lead early in the third quarter.

Don’t be surprised if the Eagles go back to the ground game this week against the New York Giants’ league-worst defense in rushing yards before contact allowed per attempt. This should inevitably lead to more goal-line chances for Hurts, who ranks second in the NFL with 18 carries inside the five-yard line this season.

Apparently Tua is human: The Dolphins’ high-flying passing attack has been taking the league by storm for the better part of Tua Tagovailoa’s time under center this season. However, Sunday’s loss to the San Francisco 49ers showed that this group isn’t quite unstoppable. WR Jaylen Waddle had not one, not two, but three separate inaccurate targets lead to incompletions on what should have been 20-plus yard chunk plays while Tyreek Hill also had an overthrow prevent an explosive play. Still, the most egregious was a misfire to Jeff Wilson on what had the potential to be a 72-yard house call with a perfect pass. It’s fair to say that Wilson didn’t exactly display the best receiving chops in the world, but clearly, this one should have been a helluva lot more than an incomplete pass.

Don’t panic Dolphins country: Tua continues to sit atop the league in yards per attempt (9), PFF passing grade (90.4) and a myriad of other efficiency statistics. Week 13 marked the first time since Week 7 that this offense was held under 30 points. Vegas doesn’t seem too worried: The Dolphins’ 27.75 implied team total ahead of their matchup against the Los Angeles Chargers is the second-highest mark in Week 14.

WHO’S THAT POKEMON?: Can you guess who the below two quarterbacks are?

Of course, Player A is Kirk Cousins and Player B is Jared Goff. The Minnesota Vikings and Lions have had drastically different seasons in terms of a little thing called winning football games, but the latter signal-caller has certainly shown off a ceiling that has been missing for quite some time. Overall, Goff is leading the NFL’s sixth-ranked scoring offense and should easily throw more than 22 touchdowns in a season for the first time since 2018.

The Lions are wildly favored by 2.5 points ahead of Sunday’s NFC North matchup against the Minnesota Vikings, so don’t be surprised if Goff continues to supply more good than bad with his group of pass-catchers healthier than they have been all season.

Offense is easier when the defense sucks: The only four defenses allowing an explosive pass play on at least 9.5% of their opponent’s dropbacks: Houston Texans (10.2%), Chargers (10%), Pittsburgh Steelers (9.6%) and Atlanta Falcons (9.6%).

Hutley has managed to average 205 pass yards per game during this stretch – slightly more than what Jackson (203) was at prior to suffering last week’s injury. Adjusting the rankings won’t be as easy as crossing out Jackson’s name and inserting Huntley’s, but just realize this backup has the profile of someone capable of being far better at *fantasy* football as opposed to real life.

Not every passing attack is meant to fly: The clear-cut bottom-five offenses in terms of expected failure in creating big plays through the air: Tampa Bay Buccaneers, Chargers, Arizona Cardinals, Texans and Buffalo Bills.

Should Stefon Diggs fantasy managers be especially worried about stud rookie CB Sauce Gardner?: Not specifically. Gardner hasn’t followed a specific receiver around all season – including when these teams met back in Week 9. He’s spent 78% of his snaps this season as the defense’s left cornerback, so Diggs and Gabriel Davis should see a mix of Gardner and the rest of the Jets’ elite secondary.

The latter point is the bigger concern for Diggs and company: This defense in general has simply been awesome against opposing passing attacks.

Of course, this is a Josh Allen-led passing game that we’re talking about here. Fire up Diggs as his usual sky-high WR1 self; the recently turned 29-year-old receiver is on pace for a rather incredible 129-1,702-14 receiving line this season. Davis is also someone who should continue to be started in far more fantasy lineups than not due to his week-winning-caliber boom upside. Heck, even Isaiah McKenzie is a reasonable FLEX as long as he continues to work as the offense’s clear-cut No. 3 wide receiver.

Is Chris Godwin locked in as the only true high-end fantasy asset left in Tampa Bay?: Sadly, yes. The scoring upside also isn’t exactly sky-high inside of an offense that scored more than 22 points on exactly *checks notes* one occasion all season. The Buccaneers have had twice as many games with 21 or fewer points in 2022 (10) than they did in 2020 and 2021 combined (five) even when also including the playoffs.

Still, Godwin has been a model of consistency when healthy this season, catching at least six passes in all nine games since returning from injury in Week 4. One of just 11 wide receivers averaging at least 15.5 expected PPR points per game this season, Godwin is a volume-based WR2 who would probably be flirting with legit top-five treatment if this offense environment was even somewhat close to as productive as what the world witnessed in 2020 and 2021.

And then there’s Mike Evans, who hasn’t scored since Week 4. He’s failed to reach even 60 receiving yards in a game since Week 8. Part of the problem has been Tom Brady’s reluctance to overly feature Evans in recent weeks: Godwin (34 targets) easily leads the way in total pass-game opportunities during the Bucs’ last three games, with Evans (19) only barely working ahead of Rachaad White and Julio Jones. Evans remains a low-end WR2 this week due to six teams being on bye, but he’s not someone who needs to be started against PFF’s fifth-best secondary in team coverage grade.