Fantasy football waivers can often make or break your season. Making the right decision on which players to add is crucial, so we have you set up with a deep list of potential waiver wire adds for Week 4.

Sony Michel, NE (25-50%) — Michel racked up 74 percent of the Patriots' carries in Week 3 and is locked in as the clear lead back going forward.

Kerryon Johnson, DET (25-50%) — The rookie impressed in Week 3 with 101 rushing yards on 16 carries. Johnson is a big play waiting to happen and will continue to see a healthy workload. 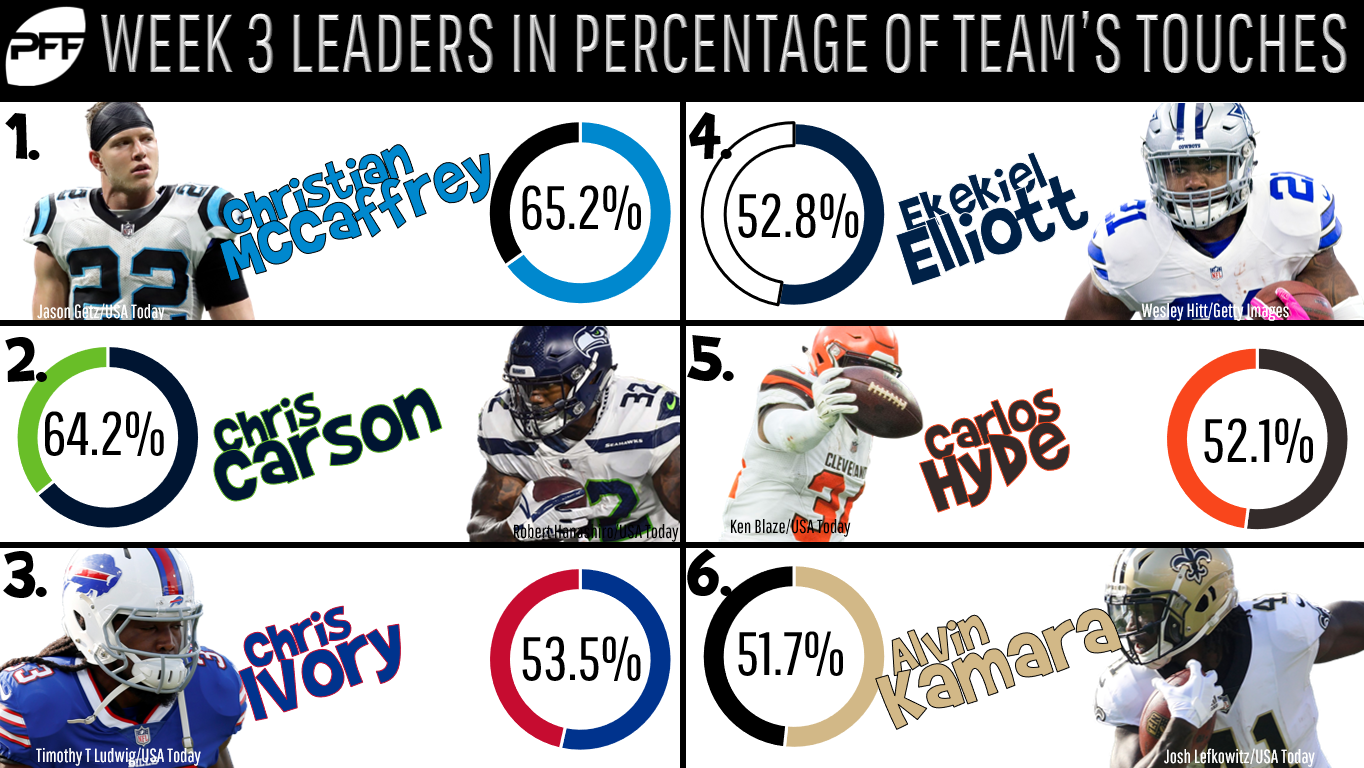 Chris Carson, SEA (20-40%) — Carson had a massive 64 percent of the Seahawks touches in Week 3. Only Christian McCaffrey had a higher percentage of his team's touches. Carson will be an RB2-plus if this workload continues.

Calvin Ridley, ATL (20-40%) — Yes, he was the No. 1 fantasy wideout in Week 3, but don't get too crazy with Ridley. The Falcons exploited a weak matchup in coverage and Ridley is still the No. 3 in Atlanta.

Tyler Boyd, CIN (20-40%) — The former Pitt Panther has exploded over the last two weeks and is now deserving of WR 3 consideration, especially in PPR leagues.

Mike Williams, LAC (20-40%) — Williams got on the board with two touchdowns last week, but more importantly, he ran the same number of routes as Tyrell Williams.

Tyler Eifert, CIN (15-30%) — When healthy, Eifert can be one of the top fantasy tight end options. He's coming off a solid Week 3 and appears to be healthy.

Baker Mayfield, CLV (4-7%) — The Mayfield era has officially begun in Cleveland. The No. 1 overall pick impressed in his debut and should immediately offer QB2 value.

Josh Allen, BUF (3-5%) — It won't always be pretty with Allen, but he showed last week that he's capable of putting up QB1 fantasy numbers even in a tough matchup.

Ryan Tannehill, MIA (3-5%) — Tannehill has quietly put up QB1 fantasy numbers through the first three weeks, thanks in part to his 74 rushing yards.

Javorius Allen, BAL (8-15%) — While Allen isn't the lead back in Baltimore, he is seeing lots of work in the red zone with four carries inside the 5-yard line already this season.

Duke Johnson Jr., CLV (5-10%) — Baker Mayfield's presence is going to help the Browns across the board, so it's a good idea to scoop up Johnson if he was dropped in your league.

Aaron Jones, GB (5-10%) — The Packers surprisingly gave Jones one more carry than Jamaal Williams in Week 3. He's still a volatile play as a fantasy starter, but Jones should be owned.

Nyheim Hines, IND (3-5%) — Hines continues to see usage as a passing-down back for the Colts. His athleticism and upside are very intriguing for fantasy purposes in PPR leagues.

Geronimo Allison, GB (10-20%) — Be careful to not overspend on Allison. He should be owned, but keep in mind that he only saw four targets last week.

Sterling Shepard, NYG (10-20%) — Don't expect Shepard to outscore Odell Beckham every week, but he showed that he's worth of at least flex consideration with the bye weeks starting up.

Christian Kirk, ARZ (7-10%) — Kirk looked like the Cardinals best wideout in Week 3 and should now be tucked away on benches, especially with Josh Rosen now starting in Arizona.

Jordy Nelson, OAK (5-8%) — You may have dropped him last week, but Nelson showed that he still has a little tread left on his tires.

DeVante Parker, MIA (5-8%) — Parker got back on the field last week and will have a large role in the Dolphins offense going forward.

Cameron Meredith, NO (4-7%) — The Saints finally had Meredith on the active gameday roster this past week. His upside is appealing in that offense.

Dallas Goedert, PHI (10-20%) — The Eagles used two-tight ends on most of their snaps in Week 3 and Goedert responded with one of the top tight end stat lines of the week.

David Njoku, CLV (10-20%) — If his owner already got fed up and dropped Njoku, go out and scoop him up. Baker Mayfield will help his fantasy value.

Vance McDonald, PIT (7-10%) — He had one of the nastiest stiff arms you'll see Monday night, and showed that he can offer major fantasy upside.

Josh Rosen, ARZ (1-3%) — His debut wasn’t nearly as impressive as Baker Mayfield's, but Rosen is now the starter in Arizona and should be owned in deep leagues and 2QB formats.

C.J. Beathard, SF (1%) — With Jimmy Garoppolo out for the season, Beathard will now be under center for the 49ers. As a starter, he's now relevant in 2QB leagues.

Nick Chubb, CLV (1-3%) — While Chubb doesn't have a significant role right now, it might be wise to stash him in deeper leagues.

Wendell Smallwood, PHI (1%) — Keep in mind that Smallwood's Week 3 stat line was the product of both Jay Ajayi and Darren Sproles being out for Philly.

Ty Montgomery, GB (1%) — The hybrid running back saw seven targets in Week 3, which was third-most on the Packers.

Ronald Jones, TB (1%) — While Peyton Barber appears to still be locked in as the starter, Jones is worth tucking away in deep leagues.

Paul Richardson Jr., WAS (1-3%) — The Redskins head into their bye this week, but it isn't a bad idea to stash Richardson after he got on the board with a long touchdown in Week 3.

Rashard Higgins, CLV (1%) — Higgins in the No. 3 in Cleveland, but like the rest of the Browns, he'll benefit from Baker Mayfield under center.

Ricky Seals-Jones, ARZ (3-5%) — Seals-Jones got in the end zone and figures to benefit with Josh Rosen now in at quarterback for the Cardinals.

Benjamin Watson, NO (3-5%) — Watson doesn't come with a lot of upside, but his five catches for 71 yards in Week 3 is a solid enough for back-end TE1 value.

Rhett Ellison, NYG (1%) — With Evan Engram out with a knee sprain, look for Ellison to see an uptick in target volume over the next few weeks.

Los Angeles Chargers (1%) — Jimmy Garoppolo's season-ending injury means we should now target every defense going up against the 49ers. This week, that's the Chargers.

Seattle Seahawks (1%) — They aren't the Legion of Boom any longer, but the Seahawks are coming off a double-digit fantasy performance and get to face Josh Rosen in his first professional start.

Tampa Bay Buccaneers (1%) — The Bears have quietly been a plus matchup for opposing defenses with nine sacks and five takeaways allowed through the first three weeks of the season.