Week 2 of the AAF is in the books, and there’s a lot to process for fantasy football purposes. Just like we do with the NFL, we’ll be diving in deep with AAF fantasy coverage including recaps, rankings, and other content on the league. Here are five things we learned from the four games from this past weekend.

We have a new No. 1 fantasy quarterback 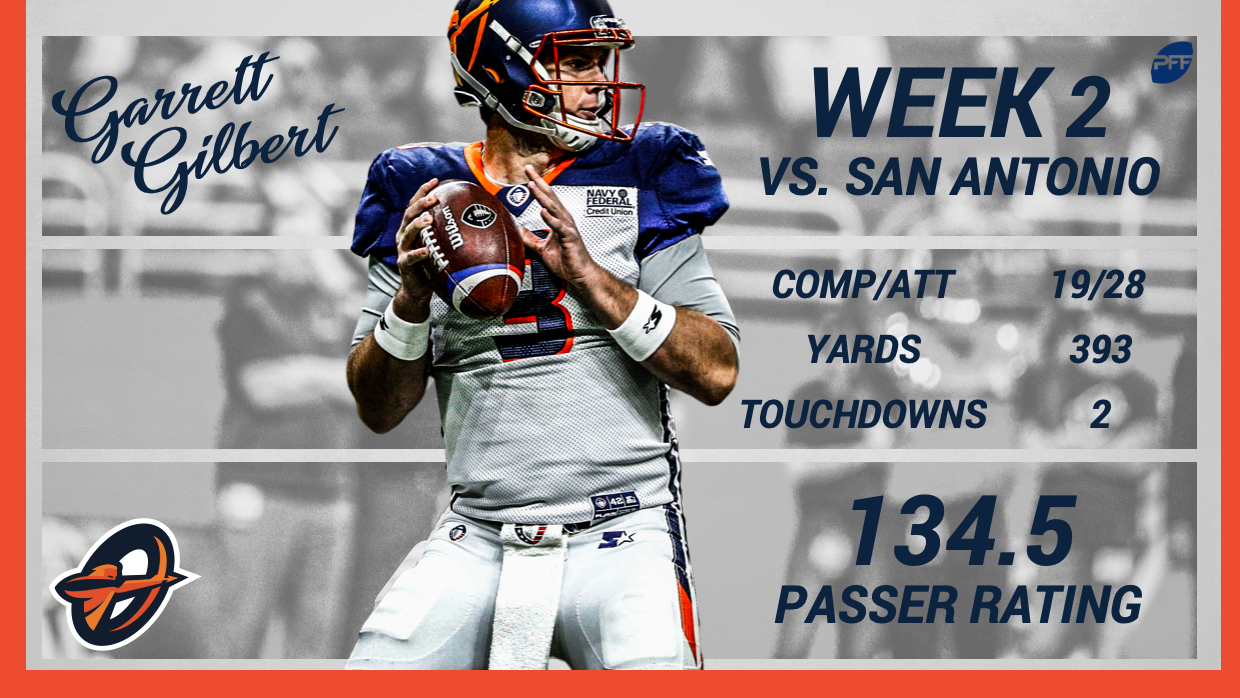 After Week 1, it looked like Arizona signal-caller John Wolford was the top fantasy option at the position, but Garrett Gilbert has now taken the reins after position the first 300-yard passing performance in AAF history (and nearly the first 400-yard performance). Gilbert had no problem moving the ball against San Antonio, with a massive 13.5-yard average depth of throw and 12.7 yards per attempt. Apollos WR Charles Johnson saw a team-high 10 targets, catching seven of them for a massive 192 yards and a score. Johnson led all wideouts in fantasy scoring for the week, with his teammate Jalin Marshall in the No. 2 spot.

In last week’s WR/CB matchup article, I pointed out that McKay could struggle in this contest with coverage expected to come from Keith Reaser. That’s exactly what we saw, as McKay managed to catch just two of nine targets on the day. Three of his nine targets were contested, and McKay only caught one of these balls. But McKay’s fantasy owners shouldn’t be concerned. His total of 20 targets leads all Alliance receivers, and there’s no sign of that volume decreasing. He remains locked in as one of the top fantasy options in the league.

Tight end continues to be a crapshoot

We thought Week 1 was bad at tight end, but this week was downright terrible. There wasn’t a single player who topped double-digit fantasy points at the position, and only one player posted more than four fantasy points. That player was Evan Rodriguez, who saw an expanded role with Cole Hunt inactive. But even so, he managed just eight receiving yards on three catches. Of course, just like we saw last week, fantasy scoring is heavily weighted toward any tight end who is able to find the end zone. Rodriguez was the only one to do so this week. But like the above advice for McKay, don’t panic if you happen to own Gavin Escobar, Gerald Christian, or Anthony Denham. These three are every-week fantasy starters. That being said, Thomas Duarte owners will want to pull the plug on the Hotshots tight end.

Trent Richardson continued to be a strong fantasy option, thanks in part to his six catches for 50 receiving yards. But there were some other names who really emerged this week for fantasy purposes. Ja’Quan Gardner led the position in fantasy scoring, and more importantly, he out-touched Terrell Watson 16-14 in the Fleet backfield. Those numbers indicate there’s still a committee in place, but Gardner is now the preferred fantasy option in San Diego. After an inefficient debut, Joel Bouagnon racked up 70 rushing yards and a score on 11 carries. Like Gardner, Bouagnon is splitting duties with Branden Oliver, who actually had three more carries than Bouagnon. Still, Bouagnon’s numbers keep him in the RB1 conversation going forward. Kenneth Farrow also impressed this past weekend and appears to be locked in as the Commanders’ feature back. Zac Stacy rebounded from a disappointing opener with a 100-yard performance. And Akrum Wadley displayed PPR upside with a position-high eight catches on eight targets. Wadley didn’t do much as a runner, but his role in the passing game makes him an intriguing flex option going forward.

Knowing the depth charts is the key to AAF fantasy success

Last week, a number of folks mistakenly started Dustin Vaughn at quarterback, despite Logan Woodside being the named the starter. This past weekend, a lot of people expected big things from Francis Owusu. While he did play 28 snaps, Owusu posted a fantasy goose egg with zero catches on three targets. Sharp fantasy players would have noticed that in our Week 1 WR/CB chart, we had Brian Brown, Kameron Kelly, and Dontrez Ford as the three starters for the Fleet. Here’s the San Diego wide receiver routes run for Week 2: Brown 26, Kelly 21, Ford 18, Owusu 14, Nelson Spruce 13. While Owusu does offer big-play upside, his role as San Diego’s No. 4 wide receiver essentially takes him out of play as a fantasy option.

For more on AAF depth charts, make sure you’re following @PFF_AAF on twitter.