As we head into Week 15 of the NFL season, it’s time again to take a look at defense/special teams units worth streaming in fantasy football.

With Week 14 in the books and the fantasy playoffs firmly underway, let me take a brief moment to congratulate all the Derrick Henry owners who actually had him in their starting lineups. I unfortunately did not … sigh. Enjoy moving on in the playoffs.

As for the DST side of things, Week 14 was a bit of a meh week. There were only four DST touchdowns scored. 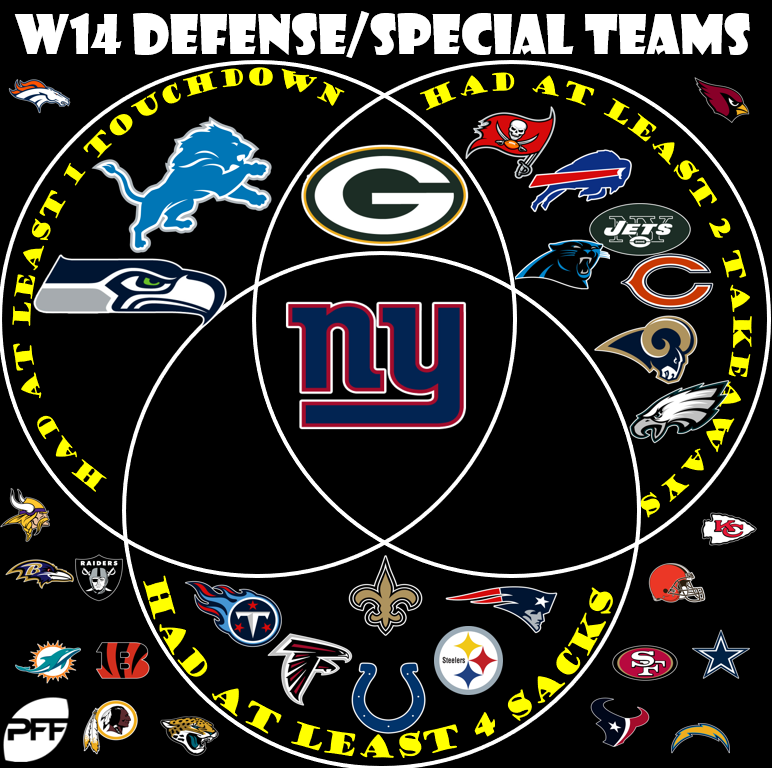 The Saints DST unit continues to roll as they racked up four sacks and an interception in the Week 14 victory at Tampa Bay. The special teams also chipped in with a blocked punt. The Saints have finished as a top-12 scoring DST in each of the past five weeks, putting up 24 sacks with 12 turnovers in those games. They are a top-five DST unit over that time and face a struggling Panthers offense on Monday night. Cam Newton is dealing with a shoulder issue and the Panthers have allowed five sacks and thrown five interceptions in the last two games. Look for Cameron Jordan and company to have another big game against the Panthers. 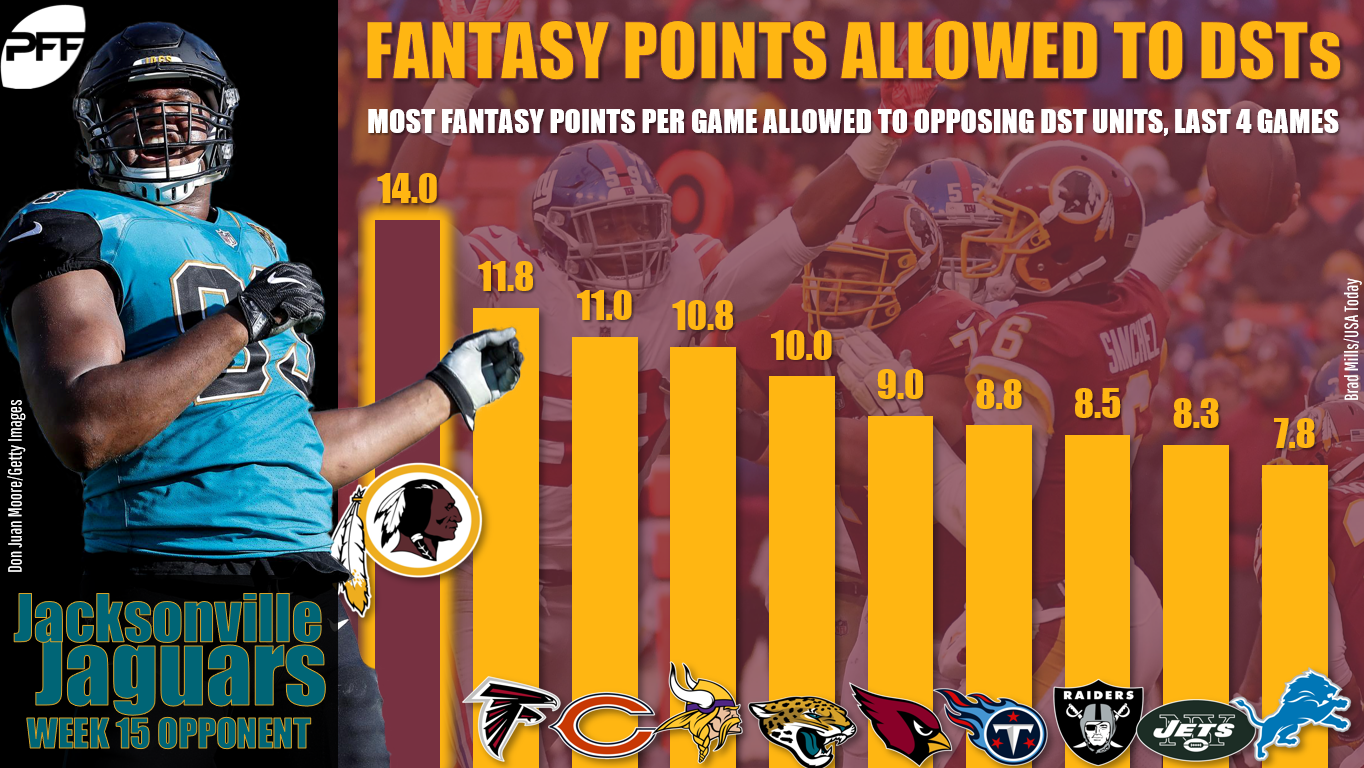 Streaming the Giants unit against Washington was a late addition to the article last week and it paid off. The Mark Sanchez era appears to have been a brief one as he was benched in the third quarter after throwing two interceptions (with one being returned for a touchdown). Josh Johnson fared a bit better in what was basically garbage time but also had an interception. Streaming the DST unit facing the Redskins has been fantasy gold over the last four weeks as they have allowed 16 sacks, nine turnovers, and two defensive touchdowns. The 2018 Jaguars DST hasn’t been the juggernaut that it was last season but will still have a huge Week 15.

This is a get-healthy matchup for a Falcons DST unit that has struggled throughout most of the 2018 season. I’ve written many times that streaming DST units facing rookie quarterbacks is advisable and, especially one on an injury-riddled offense. Due to injuries, rookie Josh Rosen is lining up behind an offensive line that started three rookies in a Week 14 loss to the Lions. Rosen was sacked three times and was hurried throughout the game by a less-than-stellar Detroit pass rush. Rosen also threw an ill-advised pass that was intercepted and returned 67 tards for a touchdown by Darius Slay. Rosen now has 12 interceptions along with two lost fumbles in 2018 while throwing for just 10 touchdowns.

Let’s stream a DST facing another rookie quarterback who is playing a bit fast and loose with the ball of late. In the past two games, Buffalo has turned the ball over six times, with rookie Josh Allen accounting for five. Allen has also been sacked five times in those games and may be without LeSean McCoy (hamstring) in this Week 15 matchup. Allen has been producing with his legs as he’s rushed for over 100 yards in each of the last two games. Look for the Lions to utilize athletic linebacker Jarrad Davis in a spy role to limit Allen’s rushing totals. The Lions are set up to post top-10 fantasy totals in back-to-back games against rookie quarterbacks.

The Giants took full advantage of a Redskins team with quarterback issues, racking up five sacks along with three interceptions and a defensive touchdown. A closer look at the Giants DST reveals that they are a top-three fantasy producer in Weeks 10-14. In that time New York has put up 14 sacks with 12 turnovers and three defensive touchdowns. In their two home games during that stretch, the Giants have six sacks, seven turnovers, and two defensive touchdowns. In their past two road games the Titans have allowed 11 sacks and turned the ball over three times. Look for the Giants to enjoy some home cooking in Week 15 against Tennessee.

You read that correctly — I’m advising streaming the DST facing the high-powered Kansas City offense. Yes, the Chiefs are averaging just over 36 points per game in 2018, but they are also handing out some nice fantasy numbers to opposing DST units over the last four games. In those games, the Chiefs are allowing an average of 16.75 total quarterback pressures while giving up 11 sacks, seven turnovers, and a pair of defensive touchdowns. The return of Joey Bosa (four sacks in the past three games) makes this a far better Chargers defense than the one Kansas City beat in Week 1. Tyreek Hill (foot) may be unavailable or at least limited for this Thursday night matchup, further boosting the Chargers’ streaming value. Current injury reports have Hill listed as day to day.

In last week’s article I mentioned that at this time of year, it’s advisable to not only chase struggling offenses (rookie quarterbacks) but also look for DST units that have something to play for. This Week 15 matchup check all the boxes. The Texans saw their nine-game winning streak snapped last week against the Colts but remain in contention for securing home field throughout the playoffs at 9-4. Rookie quarterback Sam Darnold returned last week and led the Jets to a win over Buffalo. Darnold managed just 170 yards passing with one touchdown but also threw his 15th interception in 10 games played in 2018. The Texans have put up six interceptions and two defensive touchdowns in the last four games and are poised for a bounceback Week 15 performance.

This is the short-and-sweet streaming DST option of Week 15. The Seahawks remain in the hunt for a Wild Card spot and manhandled the 49ers offense in their Week 13 game. Seattle posted three sacks, three turnovers and a defensive touchdown in that matchup. Look for Seattle to put up similar numbers this week.

Let’s call this streaming option the “Up/Down” theory selection of Week 15. The Dolphins are riding high after “The Miracle in Miami” victory over the Patriots last week and will crash back to earth at Minnesota. A visibly hobbled Ryan Tannehill will be facing the stout Minnesota defense and that does not bode well. If by chance Tannehill is ultimately unable to go then Brock Osweiler would get the call and that bodes even worse for Miami. The Patriots put up five sacks (four of Tannehill) last week and the Vikings are easily capable of repeating those numbers.