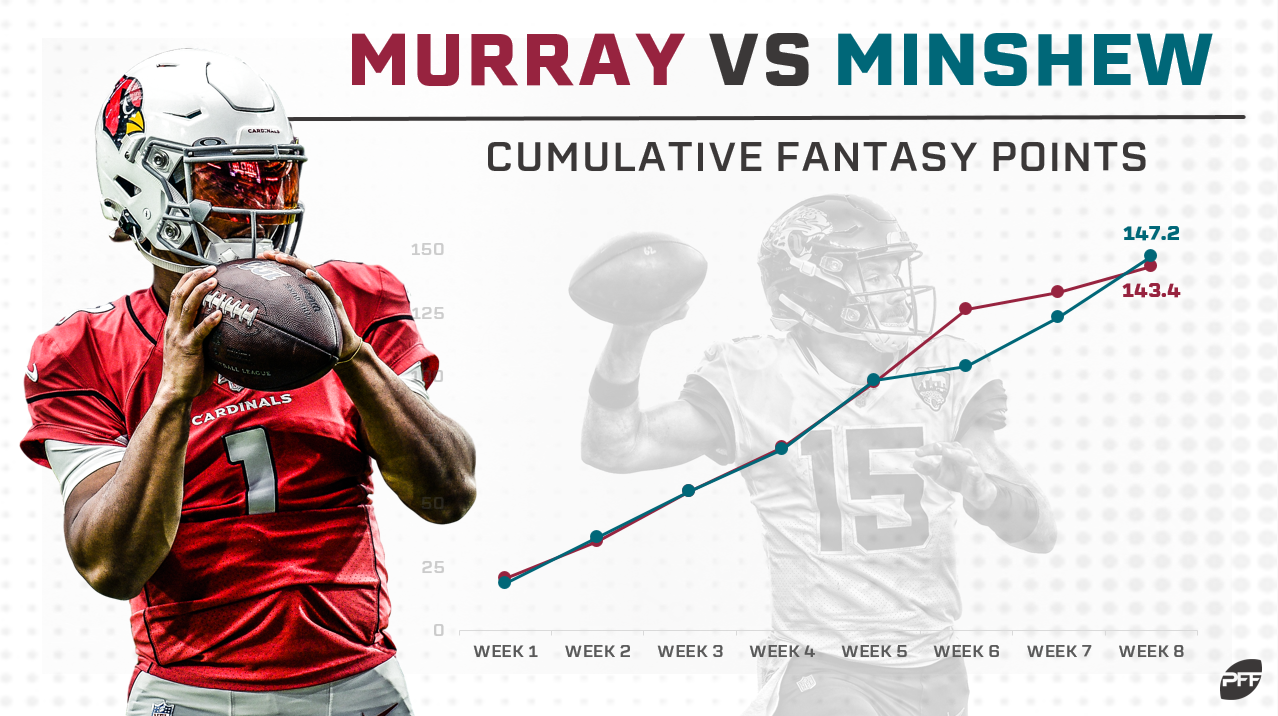 Minshew leapfrogged Kyler Murray in Sunday’s action, putting up his first career three-touchdown game to break a two-game mini-slump. Minshew now has a 13:2 TD:INT ratio on the season, with multiple touchdown passes in five of eight games. His pace puts him well behind the ridiculous numbers offered by Cam Newton and Robert Griffin III, but he’s ahead of the rest on the list here. Not bad for a guy who wasn’t ever supposed to see the field.

Murray sits just shy of Minshew so far, but their paths to their respective point totals could scarcely have been different. Murray has yet to throw one touchdown in a game — he’s gone without a touchdown in five of eight games (including four of his last five), then has two games with 2 touchdown passes and one with 3. Murray, of course, has more to offer on the ground, with 279 rushing yards and 2 scores so far (compared to the still-respectable 201 and 0 for Minshew). Murray still has the higher ceiling, of course, but you’d really like to see him offer a bit more consistency.

Jones hasn’t had a fantasy point total in the 20s yet. In four of his starts, he’s put up under 15.0 PPR points. In his other two, he’s topped 30. Those flashes are great, but until he can start offering something like weekly reliability he’s only on this list because I wanted a third entry.

Nobody is going to touch the numbers that Saquon Barkley and Kareem Hunt were putting up in their rookie years, but overall, Jacobs has had a perfectly fine rookie campaign so far, especially considering his eight-week total includes the Raiders’ bye. Barring injury, it would be an upset if Jacobs didn’t end the year solidly somewhere on this list.

Sunday was easily Sanders’ best game so far, as he put up 118 scrimmage yards and a touchdown. Signs of concern? He only had three carries (one 65-yard score and two others), and he left the game with a shoulder injury. That performance kept him on the fringe of the relevant-rookies conversation, but he’s got work to do to rise up this list.

Speaking of rookies who just had their best games, Montgomery just had 147 yards from scrimmage (he hadn’t topped 81 before that) and a career-high 27 carries in the Bears’ 17-16 loss. If what we saw Sunday is what we can expect from Montgomery going forward, he’ll shoot up this list, but let’s wait until we get it more than once before signing off.

McLaurin has really been the only rookie receiver fantasy managers have to pay attention to this year, with the others flirting with the fringes of fantasy relevance. McLaurin, though, was a bona fide starting fantasy receiver through Week 6. It’s been quieter the last two weeks (5 receptions for 50 yards across the two games), but he’s earned some fantasy leash. The offense around him could hold him in check, but he’s been good.

Metcalf has certainly had flashes. He has 4 touchdowns and four games of 60-plus yards. Of course, he’s only done both of those things once. Sunday, he scored twice, which you love to see, but he only had one catch other than those and he totaled only 13 yards in the game. He’ll be a low-floor flex going forward, but his weekly ceiling could be high.

Hardman has now scored in back-to-back games and has four touchdowns on the season. He's had some no-shows as well — 0 yards in Week 1, 9 in Week 4 — but he has sneaky weekly upside.

Years from now, Old Man Hockenson will wander his neighborhood, delighting small children with his tales of football glory in Week 1 of 2018, when he had 131 yards and everybody said he would be a superstar. Because since that game, Hockenson has 109 yards total, with no more than 32 in any game. He’s holding on to this list by the skin of his teeth.

Speaking of tight ends who aren’t really relevant, Fant doesn’t have a single 40-yard game yet. He’s averaging under 6.0 fantasy points a game. Being a rookie tight end is hard, friends.