Le'Veon Bell to IR: Stay away from the Jets' backfield, Bell now a buy-low candidate in fantasy football

New York Jets running back Le’Veon Bell was placed on Injured Reserve on Tuesday, meaning he will miss at least the next three weeks with an apparent hamstring injury.

For the time being, this will leave New York with Frank Gore, Josh Adams, fourth-round rookie La’Mical Perine and recently acquired veteran Kalen Ballage to lead the backfield against the San Francisco 49ers, Indianapolis Colts and Denver Broncos. 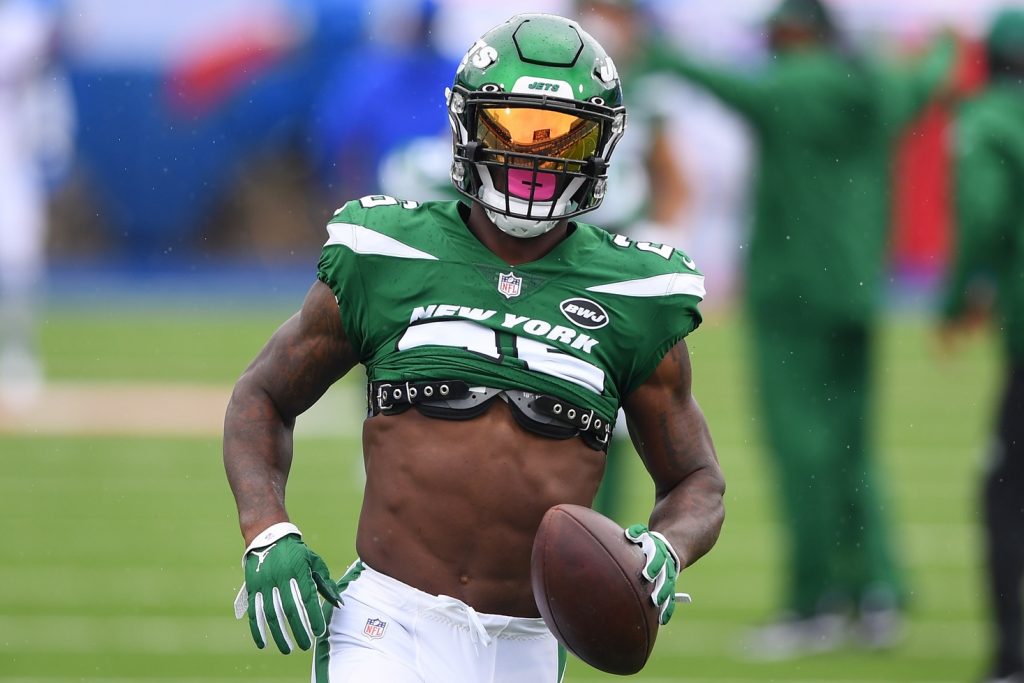 Gore is the most probable candidate to work on early downs for head coach Adam Gase after toting the rock for 62.5% of the carries upon Bell’s departure in Week 1. But that is far from any reason to try and get Gore off the waiver wire. We have seen this story before with the aging veteran, and he just doesn’t offer any upside to be fit for starting fantasy lineups.

His two best fantasy finishes last season came in Weeks 2 and 3 because those were the only games he scored touchdowns in. The Jets had seven total rushing attempts inside the five-yard line last season.

Also in 2019, Gore’s PFF rushing grade (64.4) in 2019 ranked 52nd, just ahead of Peyton Barber and Kalen Ballage. Those are not names of running backs that you want to be chasing in fantasy, so consider this also a recommendation to stay as far away as you can from Ballage and his dead-last 1.8 yards per attempt and 1.49 yards after contact per attempt from 2019.

Besides, over the next three weeks, the Jets are going to face an absolute juggernaut of run defenses. The 49ers and Colts both earned top-10 PFF grades in run defense in Week 1, and the Broncos held Derrick Henry to 3.7 yards per attempt on Monday Night.

With Gore being entrenched as the early-down runner and seeing no work in the passing game, you are much better off taking a chance on either Perine or Adams.

Perine is currently dealing with his own injury, so he was inactive in Week 1, but he brings a pass-catching element out of the backfield should he see start to see snaps on offense. He caught 41 balls on 53 targets his final year at Florida.

The Jets are likely to face plenty of negative game scripts over the next few weeks (and most of the season), so Perine could fill Bell’s role nicely as a receiver.

The rookie running back also profiles as a runner that gets what’s blocked for him and contrary to the common belief about the Jet’s offensive line being terrible, they were not bad in Week 1. They earned the fifth-highest run-blocking grade (79.7) on the week.

If Perine is still not healthy, Adams could take on the pass-catching role as he did in Week 1, when he caught both of his two targets for 14 yards.

Adams had a brief stint as the featured back with the Philadelphia Eagles as a rookie in 2018, where he put up respectable numbers. He averaged 4.2 yards per attempt (26th) and 2.84 yards after contact per attempt (22nd) among 40 qualifying running backs with at least 120 carries.

He also got the lone goal-line carry in Week 1 over Gore and did convert it to a touchdown, so at worst he could wind up scoring. But at the same time, if you are just targeting a body in hopes of it falling into the end zone, you might be better off just grabbing Barber from Washington, who is the clear goal-line back after his Week 1 usage.

As for what to do as a potential Bell owner, the answer is to just hold. You never want to sell a player at their bottom-dollar price tag, and the Jets have more favorable matchups coming up after he returns.

If you are looking for a buy-low opportunity, this is time to make a trade. Bell’s injury is a hamstring, so with at least three weeks off, he should be good to go by the time he comes back. If not for the three-week IR being implemented this season, I would imagine that he would just have been labeled week-to-week as opposed to being placed on IR.

If you have an extra bench wide receiver that flashed in Week 1 (Sammy Watkins), that’s the type of player I would be looking to flip for Bell.

And as I have shown, none of the other running backs look primed to impress so much that Bell could lose the starting running job outright. There is also the potential for the Leonard Fournette route as well, where Bell either gets cut or traded and lands in a much better situation.