Narrative Street: Do the Patriots really shut down the opponent's No. 1?

HOUSTON, TX - FEBRUARY 05: Julio Jones #11 of the Atlanta Falcons makes a catch over Eric Rowe #25 of the New England Patriots in the fourth quarter during Super Bowl 51 at NRG Stadium on February 5, 2017 in Houston, Texas. (Photo by Tom Pennington/Getty Images)

Over the course of their nearly two-decade-long run of success, Bill Belichick and the New England Patriots have become famous for “taking away what the opponent does best.” It’s naïve to think that the Patriots are the only team that game plans around their opponent’s best player, but the notion that the Patriots do it better than anyone else has simply been accepted as fact.

Let’s put it to the test.

The narrative: The New England Patriots shut down their opponent’s best player, and they do it better than any team in the league.

For fantasy purposes, this narrative has given people a reason to think twice before starting their studs against the Patriots. But should they?

For starters, I had to define each team’s “best player” from a fantasy perspective. In most cases, this is obvious, but in some, it can be subjective (like in Pittsburgh). So to eliminate conjecture, I simply looked at each team’s top player from 2014 to 2016 in terms of fantasy points per game, with a minimum season-long snap threshold of 25 percent, in order to eliminate random performances.

This gave me the list of the 96 players who served as their team’s “best player” from a fantasy perspective over the past three seasons. Of those 96, only five were tight ends. I removed those five players from the experiment because of the small sample size.

For example: The Baltimore Ravens gave up 12.3 PPG to opposing No. 1s 2014-2016, but in that same span, those same players averaged 12.5 PPG against the entire league. Therefore, No. 1s scored 1.5 percent fewer points when playing the Baltimore Ravens compared to their season average.

When referring to “wide receivers” in this section, I am only referring to wideouts who served as their team’s best player from a fantasy perspective in a given year 2014-2016.

Wide receivers typically score about 22.1 percent fewer fantasy points when playing against the Patriots versus their season average. The Patriots have been the sixth-best team in this area over the past three seasons. 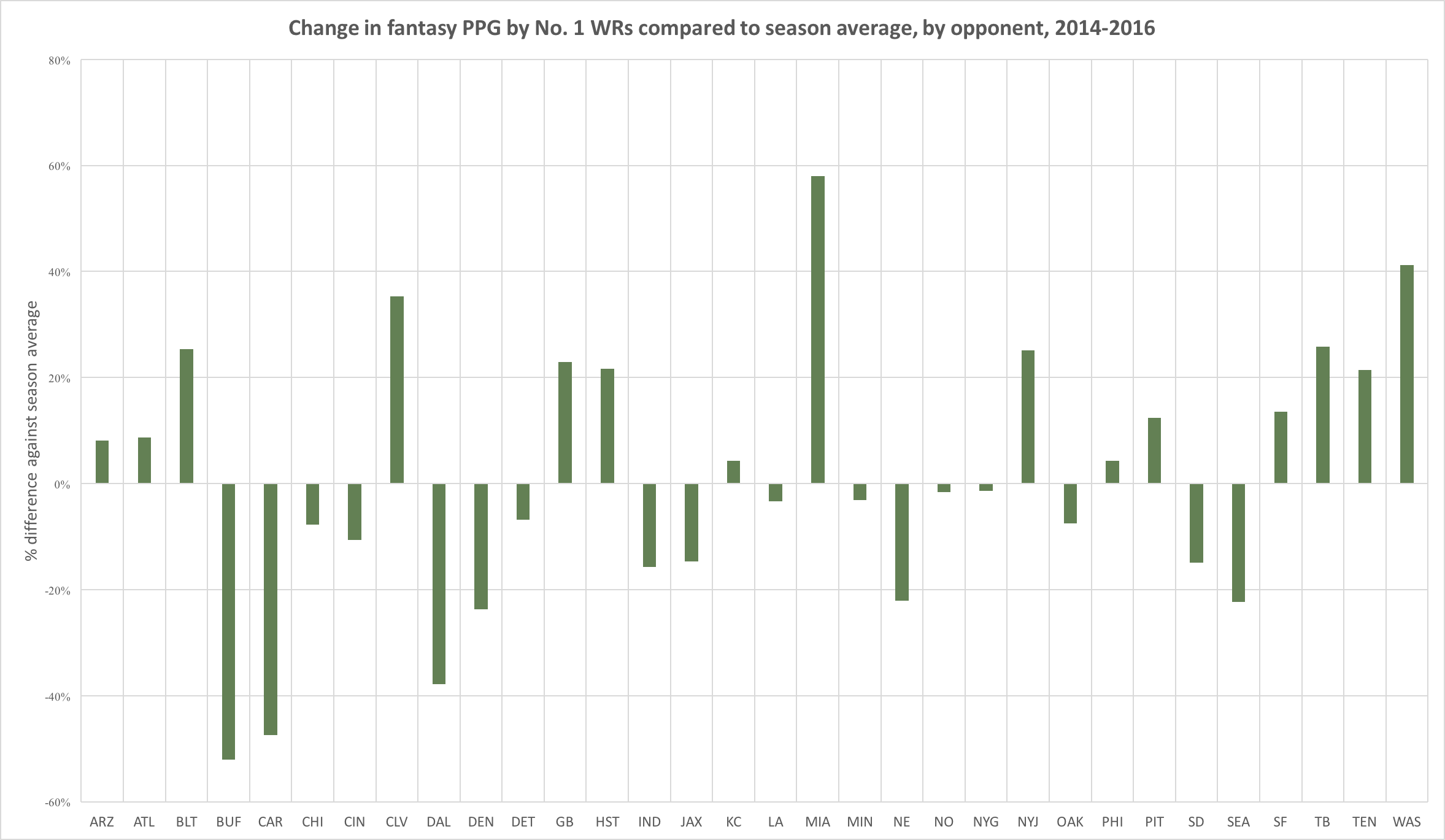 The Patriots have allowed 10.2 PPG to these receivers, while the wideouts have averaged 13.1 PPG in all games.

The 13.1 PPG that New England’s opposing wideouts averaged is the fourth-highest mark in the league. You can read this as a sort of “strength of opponent” measurement. So it’s not like the Patriots were holding mediocre wideouts in check.

Running backs who face the Patriots typically score about 23.2 percent fewer fantasy points compared to their season average. Since 2014, the Patriots have been the third-best team in this area. 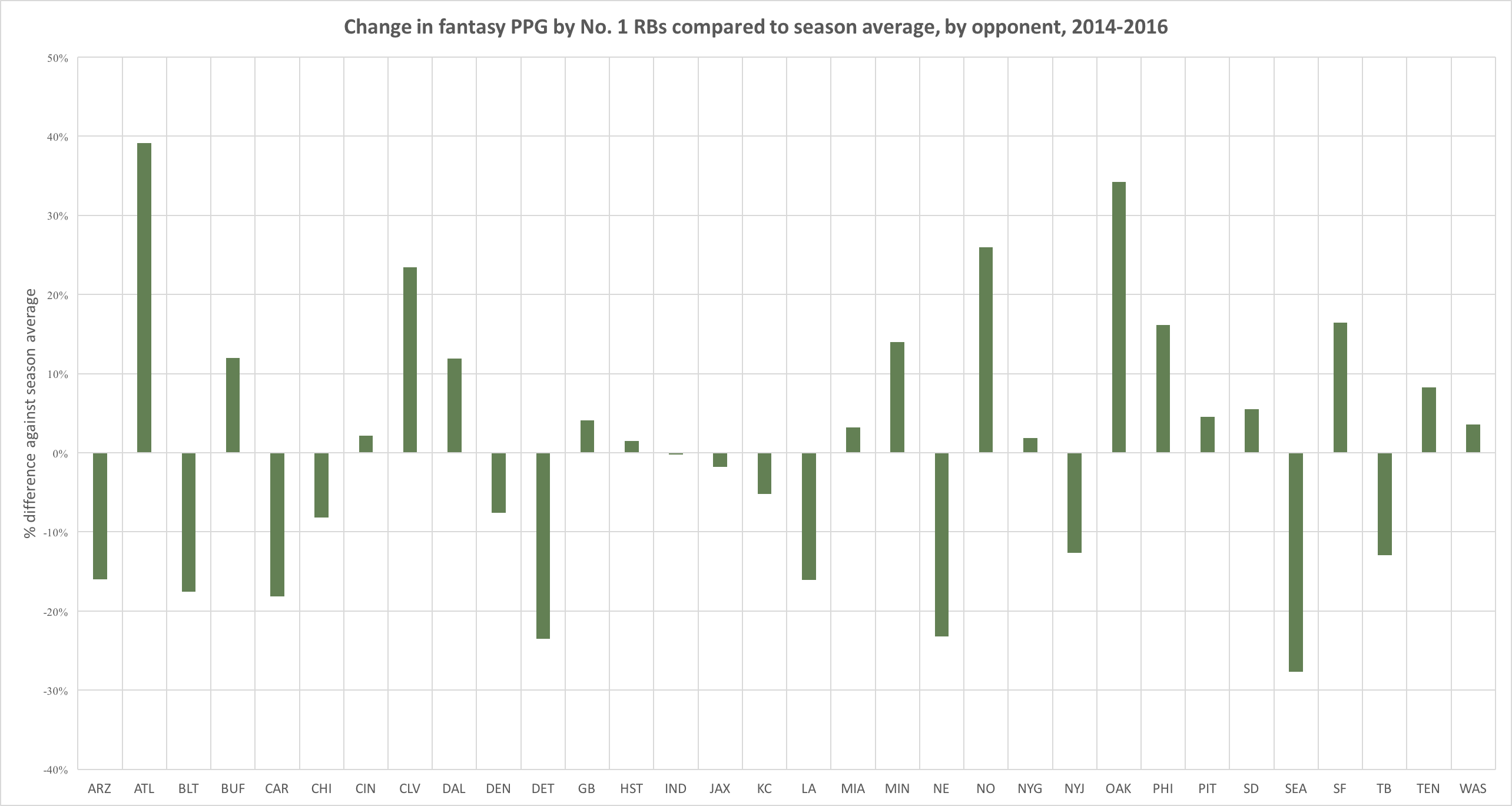 The mark of 11.7 PPG is well below league average. In fact, it’s the fourth-lowest mark in the league — the exact opposing of New England’s “strength of opponent” when discussing wideouts. With that said, the percentage difference calculated already accounts for strength of opponent — so this isn’t a reason to brush aside the research. But if there is one knock against the Patriots in this section, this is it.

Overall, a team’s No. 1 fantasy option (excluding tight ends) scores about 22.9 percent fewer fantasy PPG when playing against the Patriots compared to their season average. The Patriots have been the third-best team in this area over the past three seasons. 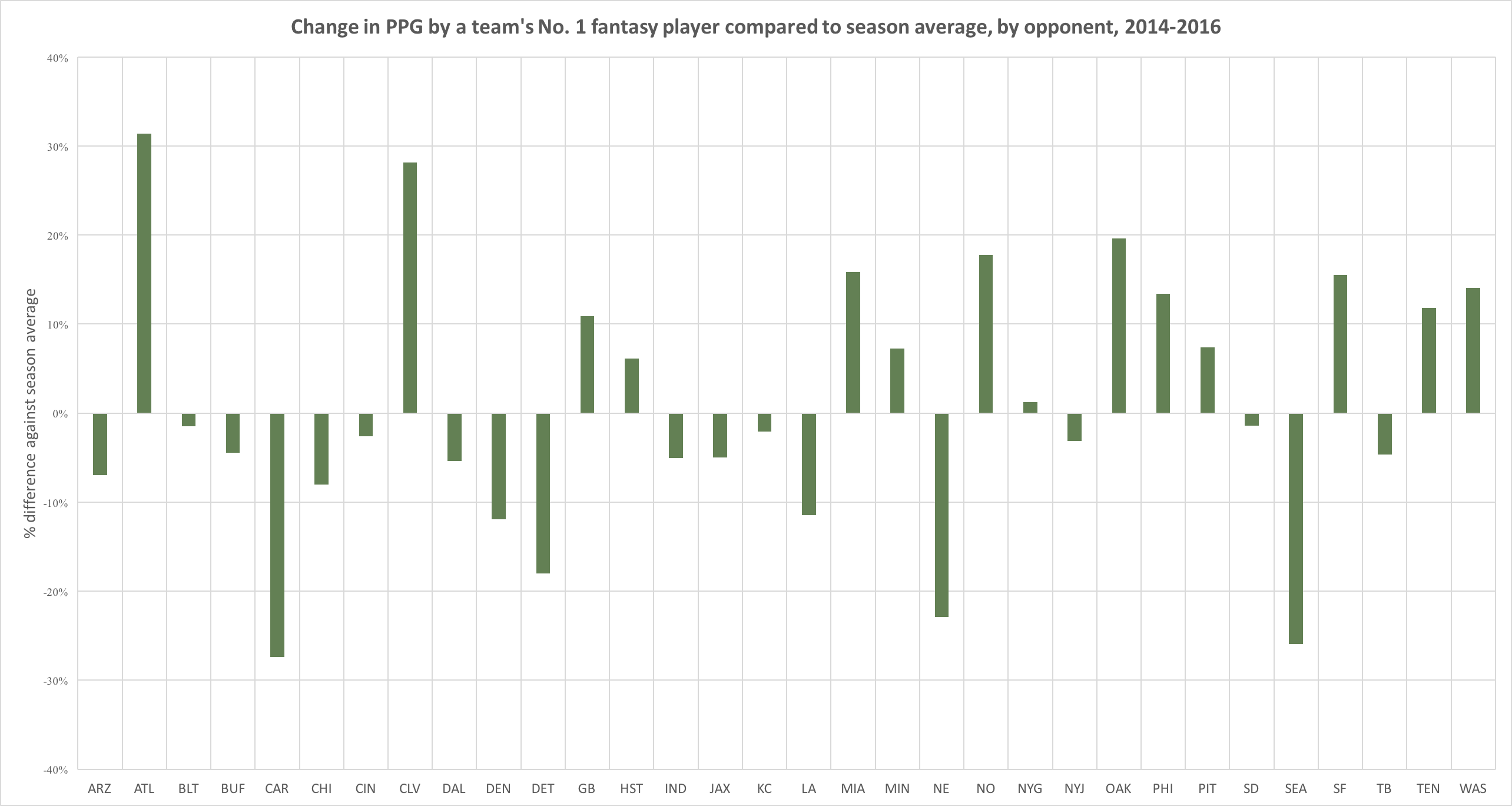 Only the Carolina Panthers (-27.4 percent) and Seattle Seahawks (-25.9 percent) have boasted better rates than the Patriots since 2014.

The Patriots do indeed slow down their opponent’s No. 1 fantasy option — regardless of whether that player is a running back or wide receiver. When facing the Patriots, a No. 1 option can expect to score, on average, about 23 percent fewer fantasy points than their season average.

This doesn’t mean you should avoid taking a team’s No. 1 fantasy option when they are playing against the Patriots — David Johnson and LeSean McCoy both had great success versus New England this year, for example — but this is certainly a narrative worth considering when setting your lineups.

Additionally, the Patriots are not the only team that effectively accomplishes this feat. Perhaps we should be giving Ron Rivera and the Carolina Panthers some more credit for doing the same.

Overall, I’d rate this narrative as true, with the caveat being that the Patriots are not alone in this endeavor.