GLENDALE, AZ - SEPTEMBER 11: Running back James White #28 of the New England Patriots runs with the football against the Arizona Cardinals during the NFL game at the University of Phoenix Stadium on September 11, 2016 in Glendale, Arizona. The Patriots defeated the Cardinals 23-21. (Photo by Christian Petersen/Getty Images)

Pro Football Focus offers a lot of great tools to PFF Edge and PFF Elite members, including our Mock Draft tool, which lets you complete full mock drafts — based on custom league settings — in less than 10 minutes.

I put the tool to the test by trying out one of the most-discussed draft strategies over the past few years: Zero RB.

There really isn’t a hard-and-fast definition for “Zero RB,” but generally speaking, if you go non-RB-heavy to begin the draft, you’re kicking off with a “Zero RB” strategy.

(Test your own mock draft strategies by signing up for a PFF subscription.)

Jones, who is actually going in the second round of fantasy drafts (on average), is really more of a late-first talent. He’s our consensus No. 3 wideout this year, and he’s due for positive touchdown regression. Jones had a healthy 16 end-zone targets last year, eighth-most among wideouts. He only scored on one of them (6.3 percent success rate). The wideout average success rate on end-zone targets last year was 34.8 percent.

Thomas is the ideal second-round target with the Zero RB strategy this year. He’s a top-five fantasy receiver who was going at the end of the first round in fantasy drafts last season. He proceeded to post a line of 104-1,245-5 … and moved down in the draft. Thomas enters his third year having just set the record for most receptions by a player in their first two years in NFL history (196).

With this pick, I’m now all-in on the Zero RB strategy. Fitzgerald is a borderline WR1 (we have him at No. 14 among receivers) in PPR leagues. Fitzgerald is slipping into the fourth round in some drafts, but I view him as a third-rounder. Fitzgerald has at least 107 receptions in each of the past three seasons. His previous career-high was 103, set back in 2005 during his second season.

Drake is not without questions — mostly revolving around how big of a role Frank Gore might play in Miami’s offense — but he’s the exact kind of high-upside running back I like to target in the middle rounds if I’m going wideout-heavy to begin a draft. Over the final five weeks of last season, Drake was a workhorse, totaling 108 touches (21.6 per game) and 594 yards (118.8 per game). Importantly, Drake average 4.1 yards after contact in that span, most among all running backs.

The PFF Fantasy crew currently has Lewis ranked as a tail-end RB2, and he’s arguably the better value among the two Titans running backs right now (Lewis and Derrick Henry). So far this preseason, Lewis has 11 touches (six rushing, five receiving) compared to Henry’s 12 (11 rushing, one receiving). It could be a realistic look at what to expect during the regular season, and that receiving work will give Lewis a great floor.

Olsen was injured during most of last season, and he heads up the list of tight end fantasy bounceback candidates for 2018. In 2016, Olsen led all tight ends in expected fantasy points per game, and so far this preseason, Olsen’s usage with the first-team suggests we can expect him to return to pre-injury form. Olsen’s eight targets are tied with D.J. Moore and twice as many as Devin Funchess through the team’s first three preseason games.

Goodwin has emerged as the top wideout in San Francisco and, based on reports out of camp, is Jimmy Garoppolo’s favorite target. Goodwin’s 10 targets this preseason pace the team, as do his 119 receiving yards.

I'm amazed by the development of Marquise Goodwin over the past year. His route running & hands are vastly improved. He's far more than raw athleticism. He looks like a bona fide No. 1 WR, and he's carrying himself as such.

Johnson finished last year as the No. 11 fantasy running back in PPR leagues thanks to his 74 receptions (fourth among RBs) and 693 receiving yards (third). Knowing that kind of ceiling is even possible from an eighth-round pick is enough to pique my interest. The Browns should be much-improved this year, though, so there likely won’t be as much garbage time duty for Johnson. Even still, he’ll be a solid flex option at worst, and he provides a very safe weekly floor. 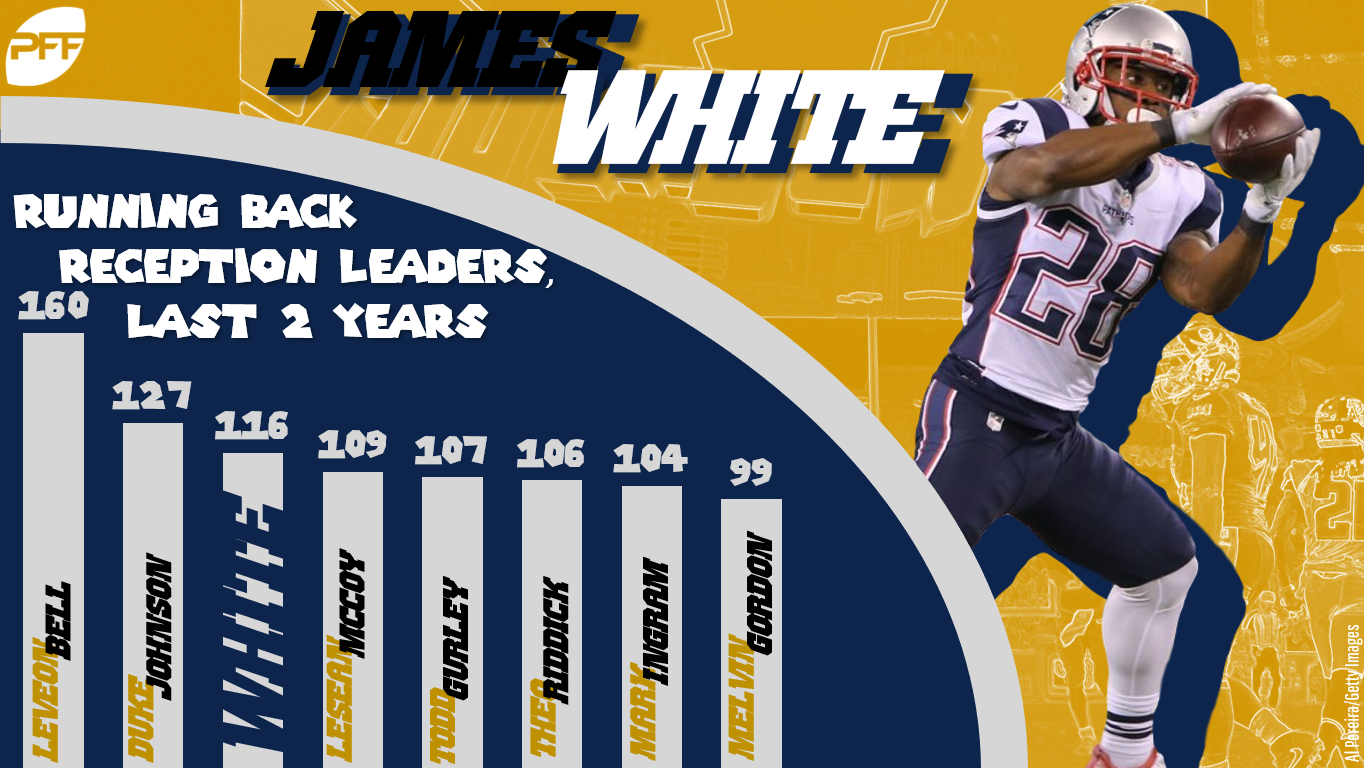 White is extremely similar to Johnson, albeit without as high of a ceiling (the Patriots definitely won’t be playing from behind much this year). White ranks in the top 10 among running back receptions in each of the past two years. He is this fantasy team’s RB4, but I’d have no problem inserting him as a flex option based on matchups.

When healthy, Luck has finished as a top-eight fantasy quarterback every year since he was drafted in 2012. I waited on a quarterback in this mock, and I’m happy to lock in Luck, who provides virtually guaranteed top-10 production with real potential to finish as a top-three overall scorer at the position.

Stills has overtaken teammate DeVante Parker in the fantasy world, and he’s a great pick once you get to the double-digit rounds of your draft. Stills was the No. 26 wideout last year after posting a line of 58-847-6. With Jarvis Landry’s team-leading 156 targets now up for grabs in Miami, Stills has legitimate WR2 upside.

I felt gross doing it, but all signs now point to Peterson being the lead running back in Washington this season (what an indictment on second-year back Samaje Perine). Peterson posted a line of 11-56 in the team’s third preseason game (5.1 YPC). If this were a real league, I’d be looking to trade away Peterson for someone with more upside if he starts 2018 hot — say after the first two or three weeks

Powell was New York’s starter for the team’s third preseason game, which is usually viewed as the dress rehearsal. Apparently, the Jets will ride the “hot hand” this season, and if you’ve ever watched Isaiah Crowell play, you know that hot streaks aren’t really in his arsenal. Crowell’s existence limits Powell’s upside, but there is no way Powell doesn’t return value as a Round 13 pick.

Miller has been climbing draft boards rapidly, and by the time you read this, he might even be going a full round ahead of where he was when I wrote this. Miller has looked great in limited time this preseason (four catches for 32 yards on six targets, including a great catch in traffic), and he’s been the buzz of training camp in Chicago. In the 14th round, you throw some darts, and that’s what I’m doing here.

Lutz is our consensus No. 3 kicker. I typically stream defenses, which means I’ll select a kicker in the 15th round instead of the 16th. (If you even have to draft a kicker; if you don’t, take a few more fliers.)

If you don’t have to draft a defense, then don’t. If you like streaming, you should eye some defenses that have good Week 1 matchups. That’s what I did with the Lions, who could be facing a rookie quarterback (Sam Darnold) in his first-ever start.