OAKLAND, CA - DECEMBER 24: Amari Cooper #89 of the Oakland Raiders catches a pass against the Indianapolis Colts during the second quarter of their NFL football game at Oakland-Alameda County Coliseum on December 24, 2016 in Oakland, California. (Photo by Thearon W. Henderson/Getty Images)

(This is the seventh of an eight-part, four-week series from Pat Thorman attempting to answer pressing fantasy football questions in each of the NFL’s divisions. Follow the whole series here.)

As we do every July during the run-up to training camp, let’s take a spin around the league to ask – and attempt to correctly answer – one fantasy football-relevant question of each team. Links to all divisions can be found here, and the AFC West is up next. This season, the division takes on the NFC West and AFC North.

(Want to research your questions for yourself? Sign up for a PFF Elite subscription and get access to all our stats.)

Besides the top two wideouts, is there fantasy value to be mined in Denver?

The relatively casual fantasy attention being paid to the Broncos centers mostly on their new signal-caller and the draft values he unlocks at wide receiver. John Elway replaced his quarterbacking clown car with Case Keenum in one of the most significant positional upgrades of the offseason. 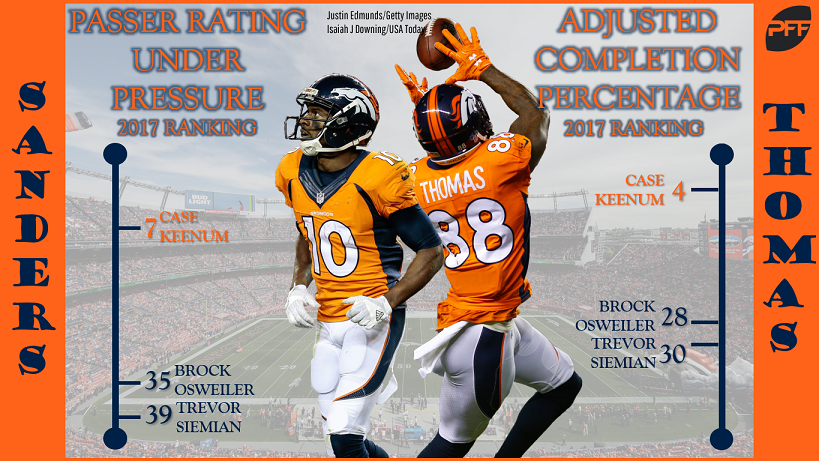 Thomas costs only a late-fourth- or early-fifth-round pick, and Sanders is even cheaper (late-seventh round). With 197 PFF-charted targets vacated from 2017 – and Thomas already saw 136 – it’s no wonder they are often mentioned as prime value picks.

The backfield production, however, may be nearly as fruitful and affordable. C.J. Anderson’s departure leaves a significant void. 63 of the aforementioned vacated targets were ticketed for running backs, along with a league-high 314 handoffs.